I just read that Queen Elizabeth is resting indoors  for the second weekend in a row at her Sandringham home.  She didn’t make it to church on Christmas.  Now the word is that she may not be well enough to attend services on New Year’s Day either. She’s pictured above after delivering her annual Christmas address to the nation (photo from “Telegraph” article cited below).

I visited Sandringham about a year and a half ago and was royally wowed. No photos are allowed inside the house, but the grounds and gardens are spectacular. 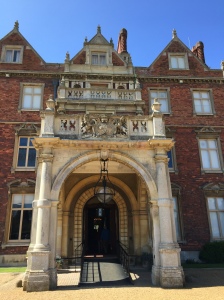 Tourists enter through the same grand door as invited guests. The place is off the beaten tourist track.  It’s way in the northern stretches of East Anglia, an area blessedly neglected by travel writers like Rick Steves. It took me many years and many trips to England to finally get there. That is the whole point, for the Royal Family.  It is their private, personal residence–a place to really get away from it all.

There’s a delightful museum, too, in the old stable block.  It holds all sorts of bits and bobs of royal life.  I was especially charmed to learn that Prince Philip (now 95) is a very decent painter. I loved his little painting of the Queen reading the morning papers.

I wrote about the parish church in two previous posts, cited below.  It’s one of the most beautiful small churches I’ve ever seen.  Each year, locals and a few tourists line up along a fence to watch the royals walk to church on Christmas, and this year on New Year’s Day too. 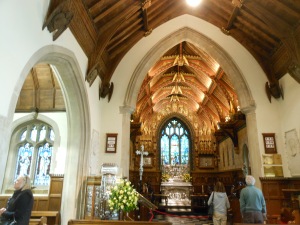 I hope the Queen is well enough to walk over to her pretty little local church and take part in prayers for New Year’s Day. Whether she makes it to church or not, I wish my favorite 90-year-old reigning queen a happy  and healthy 2017. 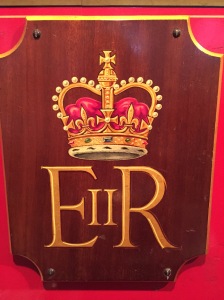 Photos are not allowed inside Sandringham House, but mere tourists like me are allowed to take pictures outside and in the nearby museum. This is the very grand entry, used by tourists and guests invited for grand occasions. I just learned that the Queen was recently in residence, possibly while I was there. But I’m sure there is a very private entrance for her and her personal guests. (I think there’s a separate ballroom entrance, which is an exit for tourists).

Yesterday Prince William and his newly-expanded family left London for Anmer Hall, their newly-expanded mansion on the Sandringham estate. I thought I’d post a few photos from my recent visit there. 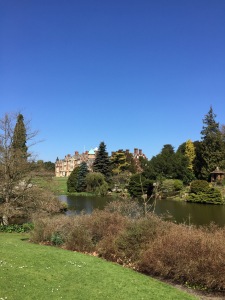 Sandringham is only open to tourists for a few months a year. At other times, it is the strictly private property of the Royal Family, bought during Victorian times as a retreat. The gardens have been open to the public since 1908.  King George V created and opened the Museum in 1930, with an admission charge of 3 pence. In 1977, the present Queen Elizabeth decided to open some rooms of the house to tourists for a few months a year–very good PR, I think.  The place certainly won me over.

The museum, in the old stable block, is as interesting as the house. It contains, as the British would say, a lot of “bits and bobs” about the Royal Family.

The family follows traditional pastimes at their country home. This old photo shows royal children looking very serious in 1905. Princes Edward, Albert and Henry and Princess Mary are taking instruction in marching from the Piper, Forsyth.

Among many fascinating retired vehicles, there’s a picnic wagon which was in use until fairly recently, when it was replaced with a new one. The picnic wagon has a place for everything, including wine bottles and fine china. It’s housed in a large building with murals that show the Royal Family and their friends enjoying the great outdoors in their beautiful grounds. I’m sure family picnics will continue for the newest great-grandchildren of the Queen.

Who knew that the Queen’s husband, Prince Philip, is a painter? He’s pretty good. Who can resist this little informal portrait of the Queen reading the morning paper?

The room guides in the house are the Queen’s regular trusted servants. They’re friendly and happy to chat. In the grand formal dining room, I asked whether the Corgis have the run of the house. Of course they do! The Queen feeds them personally in the Gun Room, and they mill around under the dining room table, probably cadging scraps like any other dogs. Right now there are seven Corgis. An elderly dog, the Queen’s beloved Monty, died recently.

This year, Queen Elizabeth will become the longest-reigning British monarch in history.  She has had to overcome her share of family troubles and occasional anti-monarchy sentiment.  But as far as I can see, the Brits really love their Queen.  And right now it seems most British folks also love the very appealing young family of William, Kate, George and Charlotte.

The new little Princess Charlotte Elizabeth Diana of Cambridge will no doubt be delighted by the Queens’s Corgis. I’m sure the Queen will be a doting great-grandmother!

The Duke and Duchess of Cambridge greeted their second baby yesterday, and she will indeed be a princess: Princess of Cambridge. In Windsor last evening, carillon bells rang out over the streets lively with celebration.

There’s no word yet on the baby’s name. Speculation on possible names is intense. Bets are being feverishly placed. Reportedly Alice and Charlotte are the front runners. Victoria, Elizabeth and Diana are also popular. Royals often are given about four names, so there are quite a few possibilities.

I was just in beautiful rural Norfolk, where William and Kate will reportedly make their primary home.  Tourists like me are allowed to visit the Royal Family’s private retreat, Sandringham. The house and grounds are breathtakingly beautiful and tranquil. William and Kate’s house, still under renovation, is on the Queen’s estate lands–in fact it is right next to Her Majesty’s horse breeding and training grounds. 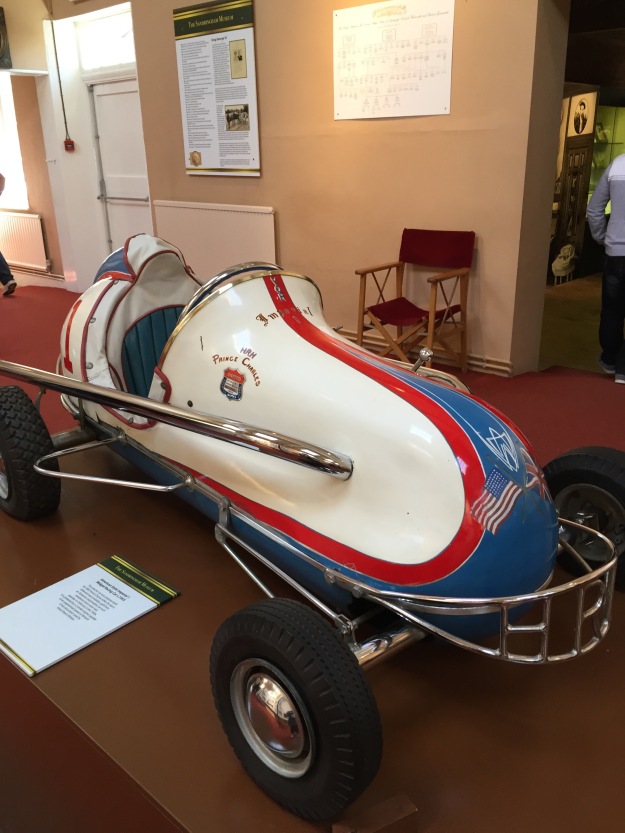 There will be plenty of fun for a child on Her Majesty’s idyllic grounds. The little race car above was presented to Prince Charles when he was a child, and it has seen a lot of use by other royal children–boys and girls.

Prince William has chosen to work as a helicopter rescue pilot, and much of the time he will be stationed in Norfolk.  That pleases me.  I remember reading that when he was a child, his mother Princess Diana used to take William and Harry out on unofficial private visits to homeless shelters.  It seems to me that aside from official working visits to hospices and daycare centers and so on, this generation of the Royal Family does genuinely care for those less fortunate.

The local parish church, St. Mary Magdalene, has a lovely guardian angel over the entrance door.
The angel is tenderly holding a baby.  I wish the new royal baby a life of being cared for, and of caring for others.

Every Christmas I see pictures of Britain’s Royal Family walking from Sandringham House to the local parish church, St. Mary Magdalene. They’re always beautifully turned out, of course, and there’s always at least one pretty child ready to present a bouquet to the Queen. Now I’ve seen the inside of the church, and it’s one of the most beautiful rural churches I’ve ever seen.

The altar and ceiling are wonderfully carved and painted.  The atmosphere is full of light and joy.

A beautifully carved angel administers Communion in the choir. There are no royal tombs here, just exquisite memorials to various Royal Family members.

The two angels above lovingly hold a silhouette of Queen Victoria, who had the foresight to buy Sandringham House as a privately owned family retreat.