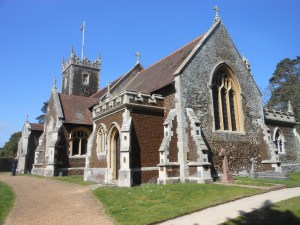 In April I visited Sandringham, the private country home of the royal family, and was especially keen to have a look at the local parish church, where Princess Charlotte was christened yesterday.  News media reported that royal well-wishers were invited to stand in the “paddock” where folks stand every Christmas to watch the royals go in and out of church.  What’s a paddock?  It’s just a field where horses normally stand around and eat grass.  Yes, the old stone parish church is in an unassuming location with fields all around, just a short walk from the grand house. From the outside, the Church of St. Mary Magdalene looks exactly like countless other English country churches. Inside, it is the most beautiful country church I’ve ever seen–not surprising, what with the royal connection.

An angel holding a baby stands, appropriately, just above the entrance. 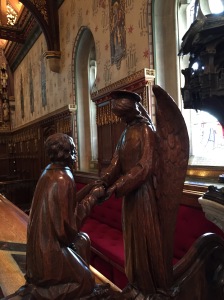 More angels minister to people inside, like this carved wooden one offering communion to a parishioner. 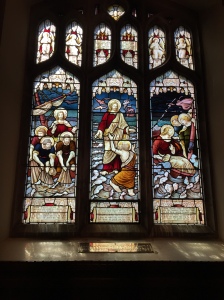 The church seems an especially joyful place of worship.  Sunlight streams in through stained glass.

The painted ceiling is especially beautiful and colorful. I think the church in its present form dates mostly from Victorian times. 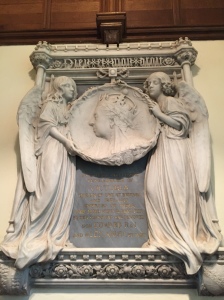 No one seems to be buried in the church, but the walls contain exquisite memorials to various royals.  My favorite is the one of a pair of angels tenderly supporting a silhouette of Queen Victoria. I’m sure she was present in spirit to watch over the newest generation of her descendants. Did they behave themselves? That’s always the big question, as Victoria knew well from the trials of raising her own very large family.

News media have breathlessly reported on supposed sibling rivalry at the christening:  Pippa Middelton is accused of trying to upstage her sister Duchess Kate by wearing essentially the same outfit, and possibly wearing it better.  I reserve judgment. If there are any soap-opera goings-on among the current young royals, I prefer not to know about them. Anyway, good luck upstaging Kate.  This is the woman who left the hospital and waved to crowds the very day she gave birth in April, wearing a pretty dress, perfect hair and HIGH HEELS.  I would not care to try competing with Duchess Kate. The images of the sisters are from the Daily Mail article cited below. 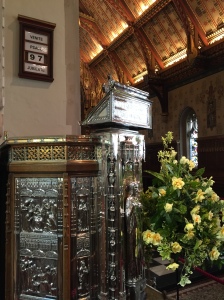 Not having been one of the 25 or so people invited to the christening, I’m not sure there was a sermon or homily.  But if there was, it was delivered from this beautiful silver Victorian pulpit. Best wishes to the new Princess!

Previous posts about Sandringham are at https://castlesandcoffeehouses.com/2015/05/07/sandringham/

Photos are not allowed inside Sandringham House, but mere tourists like me are allowed to take pictures outside and in the nearby museum. This is the very grand entry, used by tourists and guests invited for grand occasions. I just learned that the Queen was recently in residence, possibly while I was there. But I’m sure there is a very private entrance for her and her personal guests. (I think there’s a separate ballroom entrance, which is an exit for tourists).

Yesterday Prince William and his newly-expanded family left London for Anmer Hall, their newly-expanded mansion on the Sandringham estate. I thought I’d post a few photos from my recent visit there.

Sandringham is only open to tourists for a few months a year. At other times, it is the strictly private property of the Royal Family, bought during Victorian times as a retreat. The gardens have been open to the public since 1908.  King George V created and opened the Museum in 1930, with an admission charge of 3 pence. In 1977, the present Queen Elizabeth decided to open some rooms of the house to tourists for a few months a year–very good PR, I think.  The place certainly won me over. 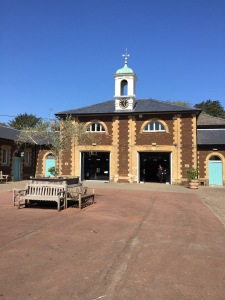 The museum, in the old stable block, is as interesting as the house. It contains, as the British would say, a lot of “bits and bobs” about the Royal Family.

The family follows traditional pastimes at their country home. This old photo shows royal children looking very serious in 1905. Princes Edward, Albert and Henry and Princess Mary are taking instruction in marching from the Piper, Forsyth.

Among many fascinating retired vehicles, there’s a picnic wagon which was in use until fairly recently, when it was replaced with a new one. The picnic wagon has a place for everything, including wine bottles and fine china. It’s housed in a large building with murals that show the Royal Family and their friends enjoying the great outdoors in their beautiful grounds. I’m sure family picnics will continue for the newest great-grandchildren of the Queen.

Who knew that the Queen’s husband, Prince Philip, is a painter? He’s pretty good. Who can resist this little informal portrait of the Queen reading the morning paper?

The room guides in the house are the Queen’s regular trusted servants. They’re friendly and happy to chat. In the grand formal dining room, I asked whether the Corgis have the run of the house. Of course they do! The Queen feeds them personally in the Gun Room, and they mill around under the dining room table, probably cadging scraps like any other dogs. Right now there are seven Corgis. An elderly dog, the Queen’s beloved Monty, died recently.

This year, Queen Elizabeth will become the longest-reigning British monarch in history.  She has had to overcome her share of family troubles and occasional anti-monarchy sentiment.  But as far as I can see, the Brits really love their Queen.  And right now it seems most British folks also love the very appealing young family of William, Kate, George and Charlotte.

The new little Princess Charlotte Elizabeth Diana of Cambridge will no doubt be delighted by the Queens’s Corgis. I’m sure the Queen will be a doting great-grandmother!