Not that many tourists make the trek from the over-the-top Palace of Versailles to the much smaller Petit Trianon, built as a retreat from the crowds that filled the main palace as soon as it was built. 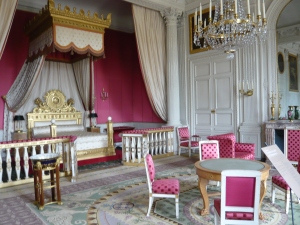 I like the much-more-human scale of the Petit Trianon. So did Marie Antoinette.  OK, I’m sure her critics were correct in accusing her of hosting raucous parties there, but I’m sure she also appreciated the details in her more quiet moments.

There’s a round salon with exquisite, soothing painted panels.

The salon has a patterned marble floor, still pristine.

A long gallery is a mostly-white version of the main palace’s Hall of Mirrors.  It’s calming, not frenetic. I think it’s too bad the royals who succeeded the glory days of the Sun King did not use the peace and quiet of their retreats to think about how they could sustain the monarchy.  In nearby Paris, daring thinkers were meeting in obscure coffeehouses, sowing the seeds of revolution. 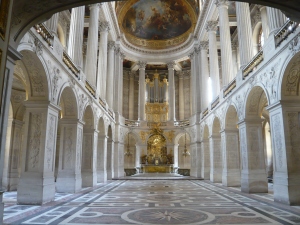 Even the Sun King himself sometimes tired of the over-the-top splendor he had created at Versailles.  He heard Mass daily in his spectacular Royal Chapel, around 10:00. 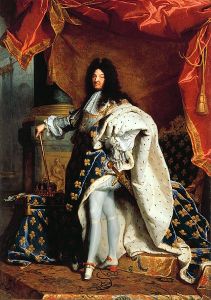 I read somewhere that courtiers attending mass were seated such that they looked at the King in his elevated gallery.  Right now I can’t verify that, but it makes some sense.  The chapel was built and carefully decorated to celebrate the association between Louis XIV and his namesake, the only French king who became an actual saint:  Louis IX, AKA St. Louis the Confessor. 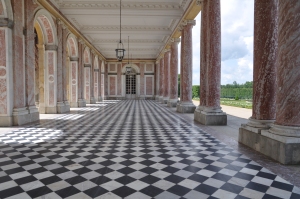 Louis XIV was anything but saintly in his younger years. He built a smaller palace, the Grand Trianon, as a private retreat where he could take his mistresses and closest friends. It originally had a facade of blue and white porcelain tiles, following the rage for Delft tiles. But the tiles deteriorated quickly.  The Grand Trianon was rebuilt in red marble.  By the time it was finished, in 1688, the Sun King had repented of his wild youth and “secretly” married the Marquise de Maintenon.

Louis XV, the successor to the Sun King, built himself a smaller palace yet: the Petit Trianon. Not many tourists make the trek to see it.

Marie Antoinette famously frolicked with her friends in the Petit Trianon. It’s my personal favorite at Versailles.

Louis XIV ended up spending a lot of time away from Versailles altogether, once he had all his nobles gathered there where he could control them.  Instead he went off to the absolutely charming chateau that he gave to the “secret” wife who tamed him in his old age.

It seems that even an absolute monarch with the world at his feet eventually can settle down.  Madame de Maintenon came in for a lot of criticism for taking the King away from the goings-on at Versailles, but I like to think the two of them were very happy together.

I wrote about the beautiful Chateau de Maintenon in these previous posts:

A few months ago in the Albertina Palace and Museum in Vienna, I came upon a small painting that showed the wreck of a carriage–an unusual subject for such grand surroundings. The caption explained that the wreck was an event in the life of the palace’s one-time occupants, Archduchess Maria Christina and her husband Albert of Saxony.  The couple became Duke and Duchess of Teschen and joint governors of the Austrian Netherlands on their marriage. They received an enormous dowry, too, from the bride’s famously parsimonious mother, Empress Maria Theresa. 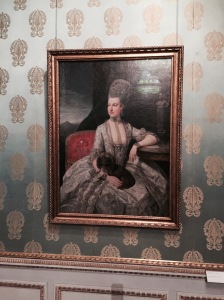 Who were these fortunate people, and why was their carriage wreck such a big deal? Having a painting of a private misfortune, which the victims survived nicely, was the 18th century equivalent of a Facebook post about a fender-bender. And the 18th century was a time when almost no one had access to anything remotely like Facebook. The answer lies in family favoritism.

Empress Maria Theresa, who ruled the Austro-Hungarian Empire for 40 eventful years, produced 16 children.  It seems that she only liked one of them: Maria Christina, who happened to be born on Maria Theresa’s own birthday.  Every other sibling was used as a pawn in the empire’s political ambitions.  They were all packed off to strategic foreign marriages, preferably with either royal cousins or other monarchs who might be able to help the far-flung empire. The unluckiest sibling was Marie Antoinette, shipped off to France as a teenager to marry the doomed Louis XVI and lose her head.

But Maria Christina was allowed to marry the man she loved, Albert, a minor princeling with no wealth and no throne. Her doting mother kept Maria Christina close, in Vienna, and built her a magnificent palace right next door to the Hofburg, seat of Austrian royalty.

Maria Christina’s portrait in the Albertina Museum shows her posing (smugly, if you ask me) with her lapdog. In contrast, Marie Antoinette, on arrival all alone at the border of France, was forced to strip down and leave behind every article of Austrian clothing because she became the property of the French state. No one told her, until the last moment, that she also had to leave behind her beloved little dog.

Years later, Maria Christina paid her kid sister a visit in France. I completely understand Marie Antoinette’s reaction. I’ve read that Marie Antoinette retreated to her private mini-palace at Versailles, the Petit Trianon, and pointedly did not invite her big sister along.

Sibling rivalry? There we have it, on a grand scale.