Budapest’s  House of Art Nouveau is a delightful conglomeration of the possessions of ordinary people during the period of peace and prosperity between the 1890s and the outbreak of the First World War.  This approximate period was known in France as Le Belle Epoque; i wrote about it in several posts about the Paris 1900 Exhibition.  The items I admired last spring in Paris were for the elite; the ones I admired in Budapest were decidedly more humble, but just as charming and thought-provoking. 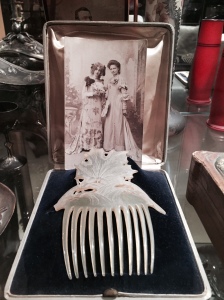 In fashion, the period began with Victorian primness and fussiness. The ladies above pose with an ivory comb perfect for hair styled in intricate billows, braids and loops.

Who was this pretty lady?  The aristocracy had themselves grandly painted life-sized, in oils.  But members of the new middle class were happy to have portraits of their loved ones in humbler pastels and watercolors.

At some point in the period, respectable women became more daring–possibly inspired by items like this exuberant little nude figurine on a dressing table.

That new boldness led directly to fashions which would not have amused Queen Victoria. This evening dress looks like a precursor of the flapper dress that became popular in the 1920s.

And at home, women enjoyed their new freedoms as much as when they were out and about.  On the door of the women’s restroom, I found this charming portrait of a woman wearing pajamas–with pants!  And lighting a cigarette from her bedtime candle! The world was changing, in Budapest as in other cities. The House of Art Nouveau is a delightful wander into the past, and a look at what the future would bring.

My apologies to those who received a post with no content.  I was trying to re-blog a post on “How to Travel in Winter” from one of my favorite travel blogs, “Picnic at the Cathedral.”  I’ll try again!

I’m just getting around to sorting my many photos of my first trip to Hungary, this past December. One of my favorite stops was the House of Art Nouveau in Budapest.  As I explained in a recent post, it’s not so much a museum as a collection of stuff that ordinary people owned, used and loved. Hungary enjoyed one of its few periods of peace and relative prosperity between about 1890 and the outbreak of the First World War.

Furniture styles at the beginning of the period were staunchly conservative, even a little stuffy.  I’m not an expert, but I might call the bedroom set above a version of the “Biedermeier” style popular with the new middle classes of central Europe between about 1815 and 1850.

The cozy dining nook above sits next to an Art Nouveau stained glass window original to the house. It looks ready for a cozy chat and a nice cup of coffee.

Later in the period, the height of fashion was for furniture with fanciful flowing lines, like this dressing table.

I’ve seen much finer examples of Art Nouveau in the design museums of Paris and Vienna, but I love the common touch of the everyday pieces haphazardly crammed into Budapest’s House of Art Nouveau. 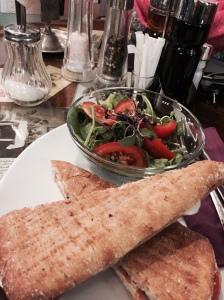 And there’s a cafe, perfect for a quick meal while dreaming of the past.  The smiling waitress asked with great interest where we were from.  She thanked us profusely for coming to her country!  This friendliness is just one of the reasons why I love Hungary.

Between about 1890 and the outbreak of the First World War, an artistic movement developed and spread all over Europe and even in the United States. It was called Art Nouveau (New Art) in French and Jugendstihl (Youth Style) in German.  In Austria, and especially in Vienna, it flourished as the Secession movement. Artists like Gustav Klimt, along with designers and architects, wanted to “secede” from the stodgy academic past. The emphasis was on flowing natural forms, and sometimes on simple but elegant geometrics.

In Budapest, I visited the Magyar Secession Haza, known in English guidebooks as the House of Art Nouveau.  I wouldn’t exactly call it a museum; nothing is really labelled or explained.  It’s just an authentic house from the Secession Era, built in 1903, and stuffed from top to bottom with objects a well-to-do but not aristocratic family would own during the time period. It’s a place to wander and to conjure up the people who lived with these objects.

Old photographs of ordinary people bring the past to life. Women pose coquettishly with flowered hats and elaborate bouquets.

Who was this child?  Why the festive feather in his cap? Was this perhaps a photo taken just before he graduated to long pants?

New production methods made elaborate (if not always tasteful) objects available to the middle classes. What is the object above? A candle holder? A four-foot-tall candy dish?  Hard to say, but it graced someone’s parlor.

The figurine above would never be shown in a serious museum of decorative arts.  But I can see its appeal to the person who brought it home a century ago, during one of the rare periods of peace in Hungary.  This lady seems to celebrate youth, freedom and the sheer joy of life. The Art Nouveau movement also celebrated the right of ordinary people to own things they considered beautiful, whether they served a useful purpose or not.

The website of the House of Art Nouveau is at http://www.magyarszecessziohaza.hu/mainen.php 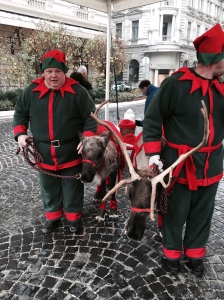 I guess there’s no denying that the holiday season is over and Santa’s elves and reindeer are safely back at the North Pole.  In New York City, the last performance of George Balanchine’s venerable “Nutcracker” ballet was on January 3.  Reviewers reported that after 50 performances in the past season, the musicians and dancers were as fresh and energetic as ever. Tchaikovsky’s 1892 score has something for everyone:  an easily-understood story for children, along with sophisticated music and dancing to satisfy the connoisseur.

I was lucky enough to attend a performance of “The Nutcracker” at the Budapest Opera House just before Christmas.  It was a matinee, so naturally there were lots of children excitedly greeting the elves and reindeer stationed outside.

The current issue of Vanity Fair magazine has an article about the history of the Balanchine “Nutcracker,” which was first seen 50 years ago. The photo above, of the Waltz of the Flowers, is from the article.  It’s at http://www.vanityfair.com/culture/2015/01/the-nutcracker-george-balanchine.

Balanchine’s New York City Ballet version is available on DVD, in its 1989 production which featured the adorable child actor Macaulay Culkin as the Nutcracker/Prince. I watch it every year.  I love it, but I find it a little over-complicated.  There’s a Godfather Drosselmeier who produces magical toys, and brings along his nephew who morphs into the Nutcracker/Prince. There’s an owl that perches on a clock that strikes midnight, and a doll-sized bed, and then a full-sized bed that rolls in and out of the wings.

The Budapest production simplified the Drosselmeier character:  he was really the children’s father, dressed in a wizard’s cape and conical hat.  This seemed psychologically sound; the young girl’s father was the one who introduced her, in a safe way, to the dreamboat Nutcracker/Prince.  It seemed appropriate for a girl’s father to show her, in a Christmas dream setting, what she ought to expect from the boys who would inevitably come calling in the future.

It seemed all right to take a photo during a curtain call.  The one above was from the beloved dance of the snowflakes.

Was the audience quiet and attentive?  Not really!  It was filled with children, marveling at the orchestra, the dancing, the costumes, the Opera House, and the Christmas season itself.  That’s how I like my Nutcracker–and my Christmas.

I’ve just returned from my very first visit to Budapest, and I’m hooked.  I’ve heard the city called “the Paris of Eastern Europe,” and now I can see why.

There’s a world-class Opera, with a building as spectacular as anything Paris or Vienna can offer.

The rich and varied collections of many museums can keep an art-lover happily occupied for days, with special exhibits in addition to wonderful permanent collections of the masters.  The special Rembrandt exhibit at the Fine Arts Museum was especially enlightening.

The city is a little more rough around the edges than, say, Vienna or Paris.  But women in Budapest dress creatively; street fashion is alive and well.

In December, the Christmas markets are in full swing.  Delicious tastes and smells tempt the visitor.

“Mosdo” means “toilet?”  That’s a new one on me.  The Hungarian language is unlike any other.  It is not related to Latin, French, German, Anglo-Saxon, or any other language except possibly Finnish.  Why is this a benefit?  Since only about 12 million people in the world can speak Hungarian, the powers that be decided some time ago that all schoolchildren should learn English.  There’s always a friendly English speaker nearby. That makes life easy for the tourist!

Join me next time for more explorations in the art, history and cultures of Europe! 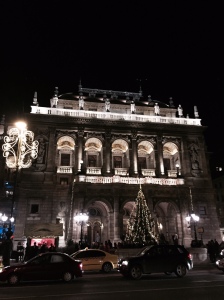 What if it were as easy and cheap to see world-class opera as to see a movie?  In Budapest, world-class opera is actually easier and cheaper than a movie–at least for the tourist.  I have not seen a single movie theater as I’ve wandered Budapest.  But at the Opera Metro stop, sure enough, I found myself outside the grand headquarters of the Hungarian National Opera.  With no advance planning at all, I walked in and bought same-day tickets for my very favorite opera, La Boheme by Giacomo Puccini. Tickets were available for just a few dollars.  I splurged and snapped up two seats that must have been returns, 3rd row center.  The cost was still about 1/6 to 1/10 what I’d expect to pay in New York, Paris or Vienna.

The gilded auditorium holds about 1200 seats, and the acoustics are generally considered among the very best in the world, after La Scala in Milan and the Opera Garnier in Paris. Emperor Franz Joseph of Austria shared the cost with the city of Budapest, once he became King of Hungary in a political compromise that put an end to years of bloody conflict.  The first performances in the neo-Renaissance auditorium took place in 1884.

From my seat, I could look over the shoulder of the conductor into the orchestra and marvel at the perfect coordination between about a hundred instrumentalists and the sublime singers onstage.  Sets, costumes, acting, music–all combined to tell a simple but moving story.  I love this particular opera because it deals with ordinary humans making ordinary messes of their lives, and doing it in the most musical and poetic way possible.  There are no dead spots in this opera–there’s either lively action or an achingly beautiful piece of music at every moment.

What about language?  The opera was sung in its original Italian. Hungarian translations appeared above the stage.  No matter! I knew the story and even most of the lyrics well enough to follow along.

Of course no photos were allowed during the performance. I had to be content with the photo above, from an earlier performance. Teodor Inincai was a wonderful Rodolfo, and Letay Kiss Gabriella was transcendent as Mimi.  I was happy to share a glorious performance with an appreciative audience.  Afterward, I didn’t want it to end.  I happily sat through many curtain calls, complete with shouts of “Brava!” and “Bravo!” and their Hungarian equivalents.

What’s next, before I leave Budapest? A performance of the ballet The Nutcracker at the Hungarian State Opera House. I can’t wait!