Of the many facades of Fontainebleau, the grand double stairway where the defeated Emperor Napoleon Bonaparte said goodby to his loyal troops is the most famous.

But on my visit a few months ago, a temporary fence stood maddeningly in the exact spot I’d need for a good photo with the French national flag flying above it. Maybe someone was tired of tourists taking selfies there.

Inside and out, renovation at Fontainebleau goes on constantly. It’s impossible to see everything on one visit.

Invariably, parts of the chateau are closed. It’s not particularly visitor-friendly, either. English is used very sparingly inside. There’s an audio guide at the ticket window, but on one visit a request for one was met with a Gallic shrug. All the used audio guides were piled up at the exit and there seemed to be no plan to haul them to the entrance. So I had to wing it with my marginal French to read placards. (I generally figure that I can read about one word out of three. I’m way worse at understanding spoken French). Still, I’d go to Fontainebleau any time. 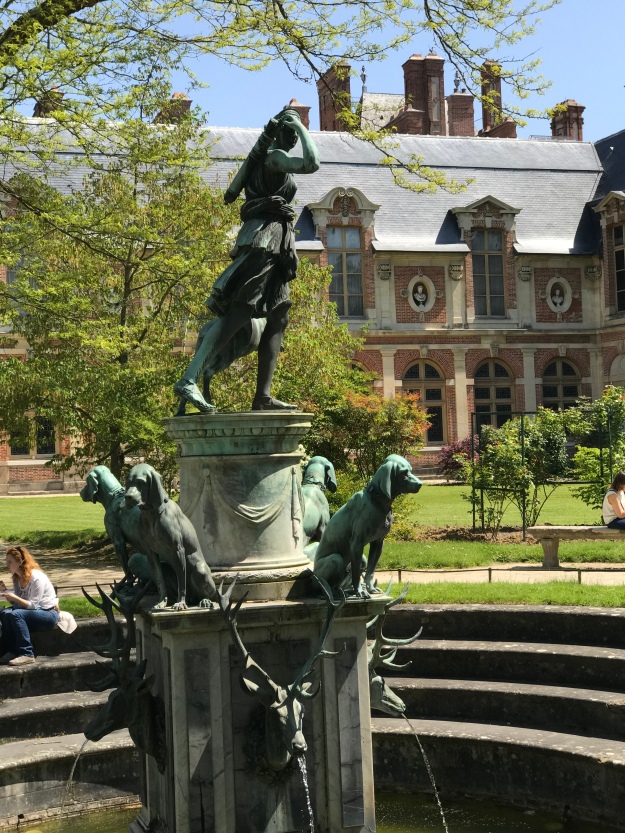 In early spring, people lounge around Diana’s fountain. (When it’s turned on, her hunting hounds pee big arching streams into the basin). 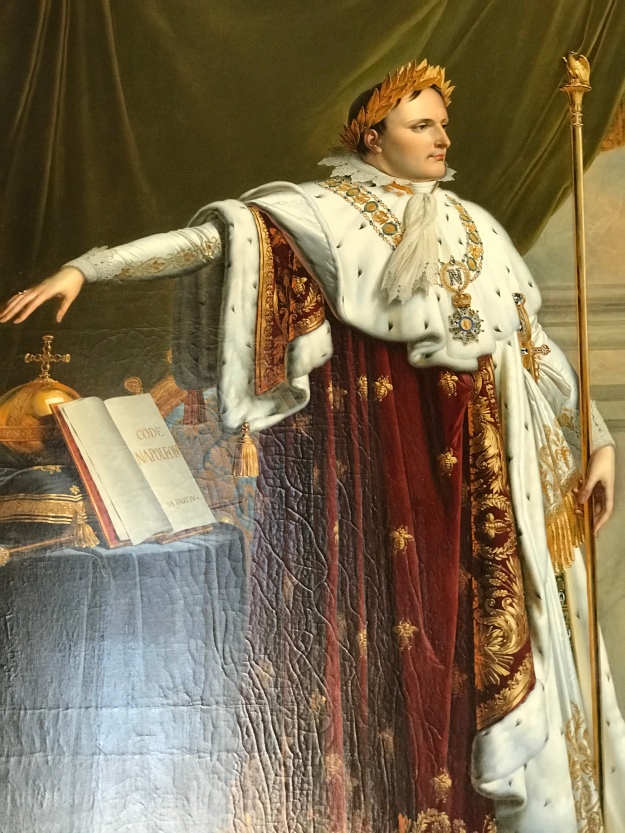 For me, the most interesting part of the huge chateau is the wing devoted to Napoleon, his family, and his exploits. It’s hard to get good photos of the portraits without glare in the long family gallery, but the effect is very grand. 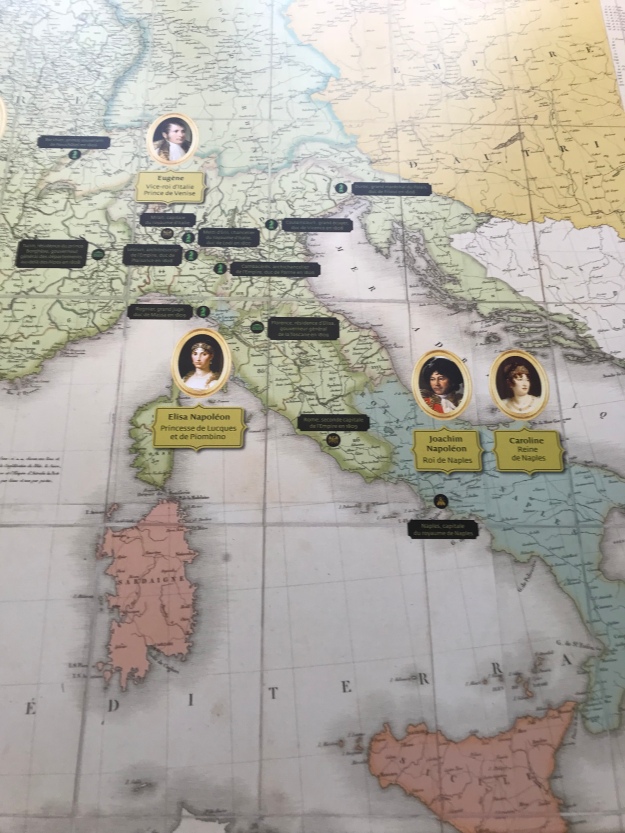 Napoleon placed his nearest and dearest on thrones all over Europe.

They all had a fine time while it lasted. I think Napoleon’s sister Pauline had the best time of all. 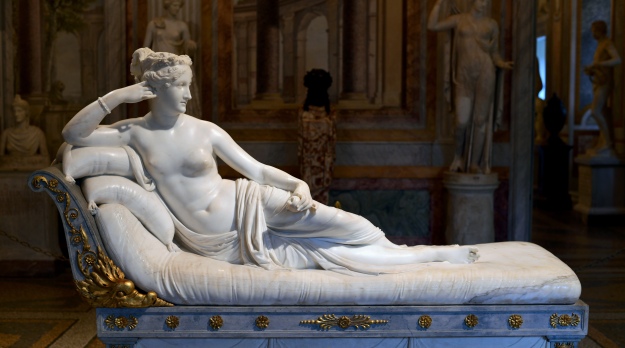 Pauline married a Borghese and as a princess, was sculpted by Antonio Canova between 1805-1808. When asked if she was uncomfortable posing nude, she replied that it was fine: there was a stove in the studio. Also, it was reportedly her idea to pose nude; she liked being talked about. (The exquisite statue is in the Villa Borghese in Rome, where tourists are not allowed to take photos). 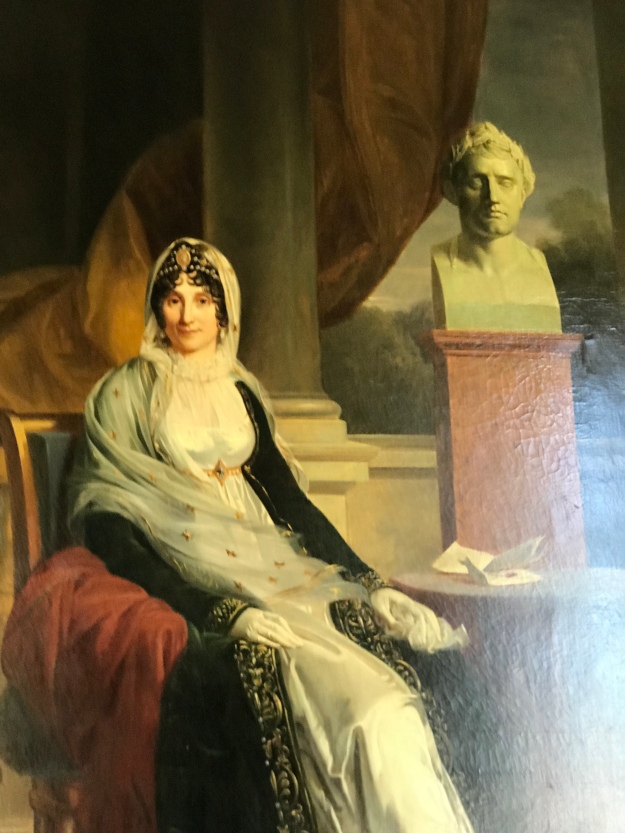 Here’s Napoleon’s mother. What mom could be more proud of her boy? 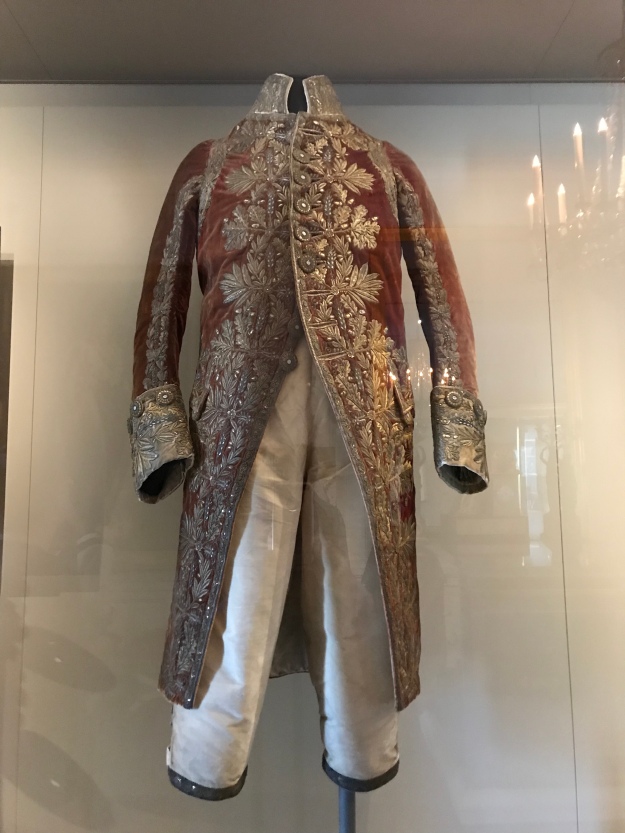 Napoleon knew how to dress for an occasion. This was one of his many dressing-up outfits.

He liked his help to look sharp, too. This was a coat worn by one of his household staff.

But by all accounts, Napoleon was happiest on military campaign, in his campaign gear.

Of course, the great man was not about to rough it while conquering Europe. He traveled with several wagons full of what he needed for the style to which he was accustomed. His personal tent had a comfy folding canopied bed and a separate work area. 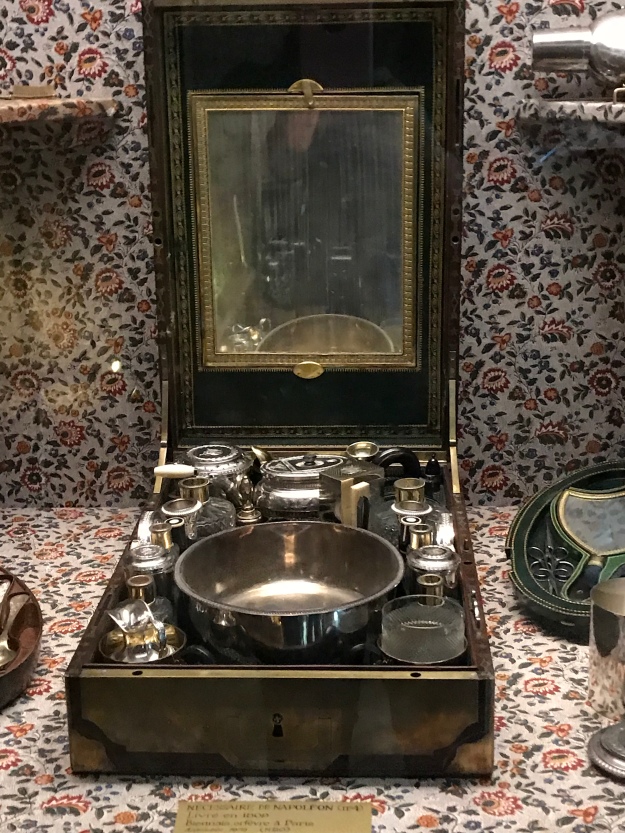 Even on campaign, Napoleon had everything he needed to look good at all times.

Napoleon attributed a lot of his good fortune to his first wife, Josephine Beauharnais. Sadly, she could not produce the desired heir, so he reluctantly divorced her. 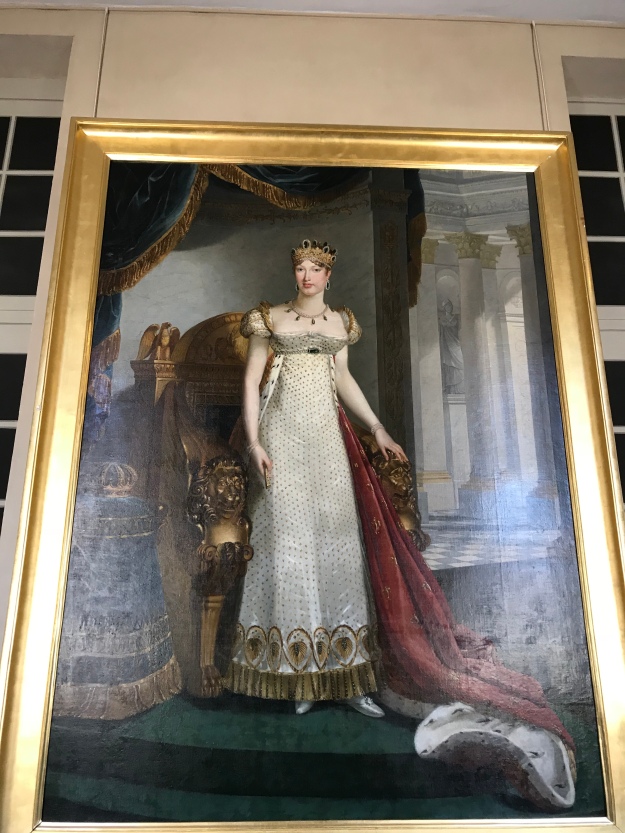 Napoleon himself announced that he was “looking for a belly.” He replaced Josephine with the Habsburg Princess Marie-Louise in 1810. (I think this portrait was painted by Gerard).

King of Rome, painted by Francois Gerard, wearing the ribbon of the Legion of Honor

Cradle of the King of Rome (one of several)

Marie-Louise did produce a male baby, duly named the King of Rome, but his life was short and sad. Things were going downhill for the Emperor. 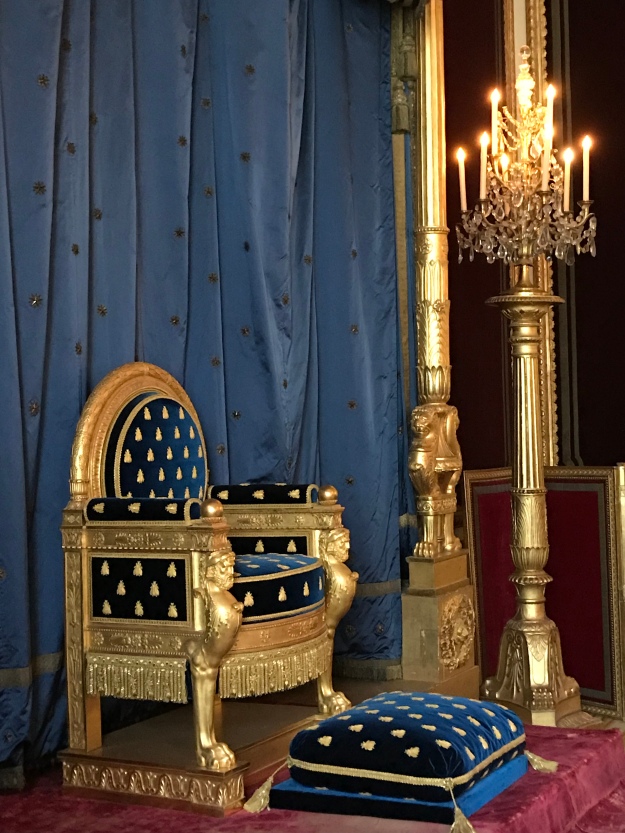 In his heyday, Napoleon received visitors in his Fontainebleau throne room. His throne featured his emblem, the honeybee. He chose it for its virtues of being constantly at work, constantly producing (honey), diligence, and orderliness.

But military defeats ended it all. On April 13, 1814, Napoleon signed the Treaty of Fontainebleau at this very table. Then he was off to exile on the island of Elba. 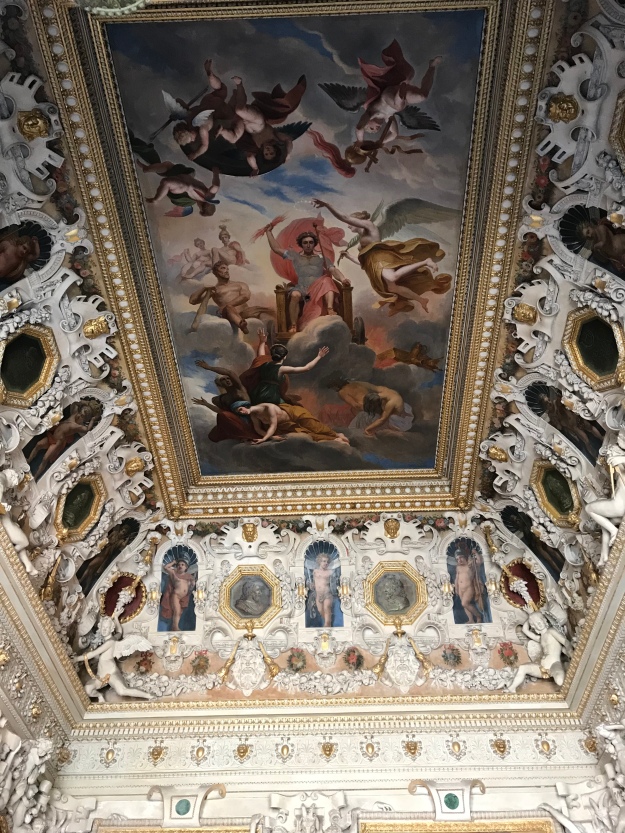 The rest of Fontainebleau is a strenuous trek through previous centuries of French history.

Above, that’s Francois I, his fire-breathing salamander, and a nice Diana the hunter that he commissioned. 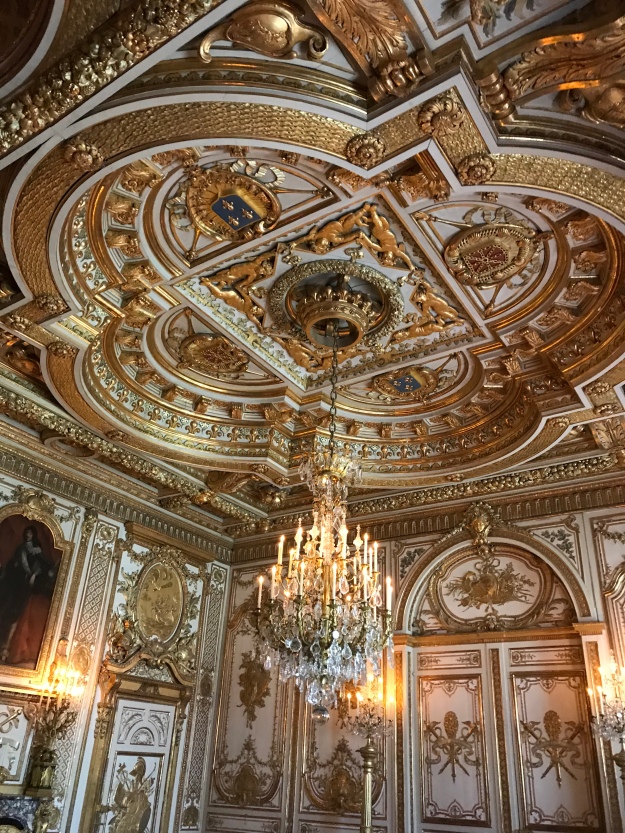 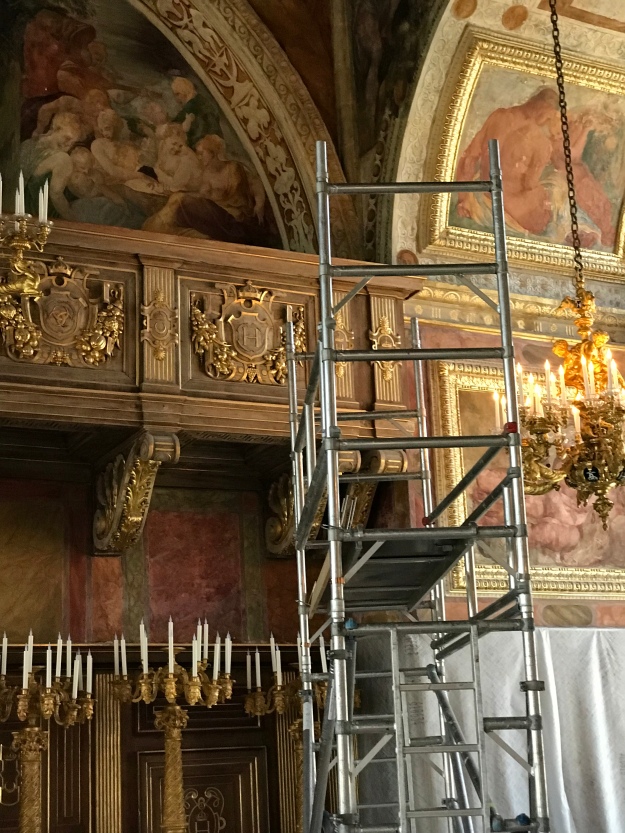 The grandeur is actually a bit much to take in. And a lot of rooms are either closed or full of scaffolding. 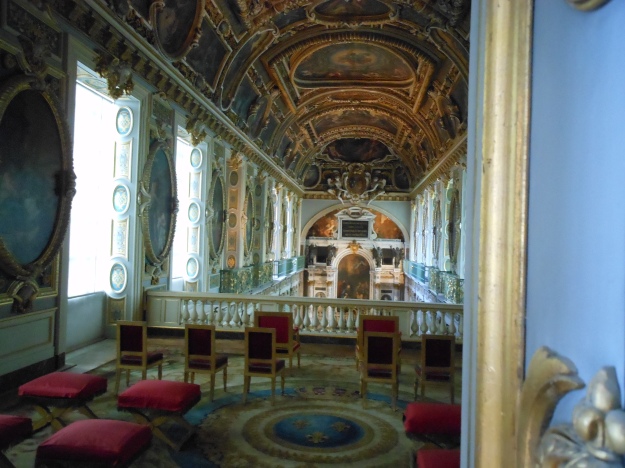 I can see why even the royals of the past needed a little breathing room, as in the spacious balcony where they attended Mass in a chateau chapel. I read somewhere that the congregation of nobles below them were seated facing the royal balcony, their backs to the altar. It seems their job was to watch their betters watch the Mass.

I can see why Napoleon’s Roman-inspired Empire style was a breath of fresh air in his time. Above, that’s a daybed and working desk in Napoleon’s private study.

Fontainebleau is one of the best places to wander through French history, coming face to face with the personalities that shaped it. The town is fun and lively, too. I’d go back anytime!