Henry, the dashing 7th Marquess of Anglesey, came to mind this morning. In a burst of fall energy, I started madly cleaning out drawers, cupboards, closets and even the dreaded garage. I thought of Henry.

After a couple of strenuous hours of pitching and organizing things I had forgotten I owned, I sank into my softest chair and thought admiringly of Henry’s study at Plas Newydd in Wales. Henry was Marquess from 1947 until he died in 2013. In 1976, he gave Plas Newydd–“New Mansion”–to the National Trust, but still lived upstairs with his family. I think his heirs still live there, too. So would I. 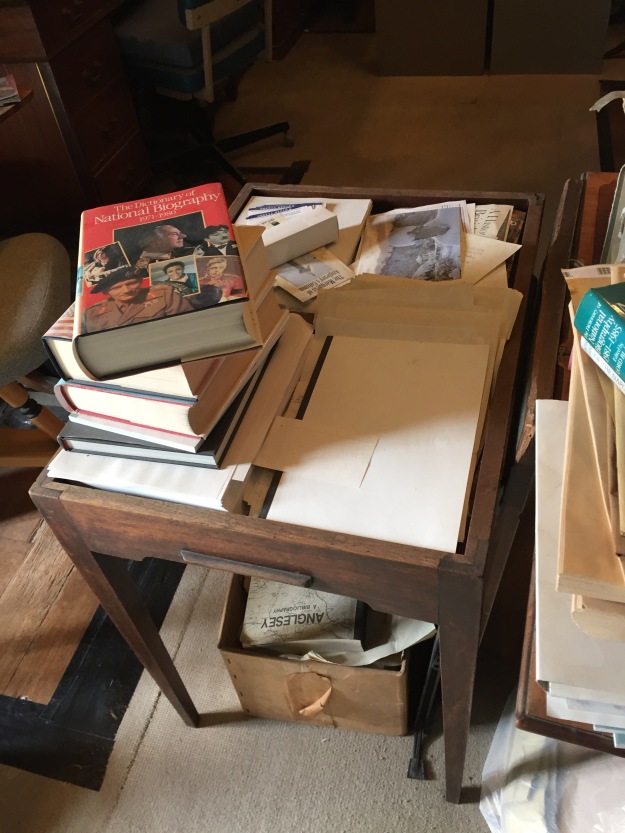 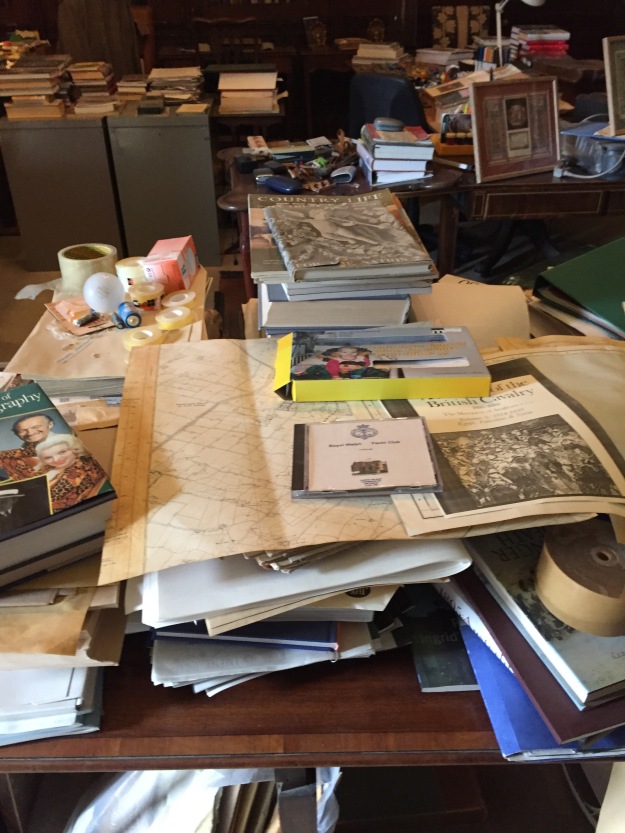 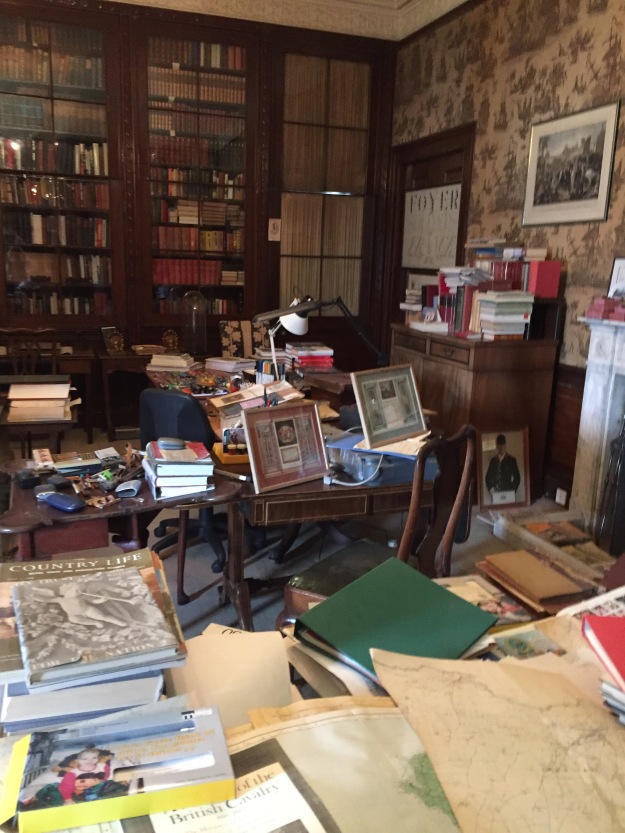 Henry’s study, used daily during his lifetime, is a magnificent jumble of books, papers, drawings, photos, magazines, and who knows what else. 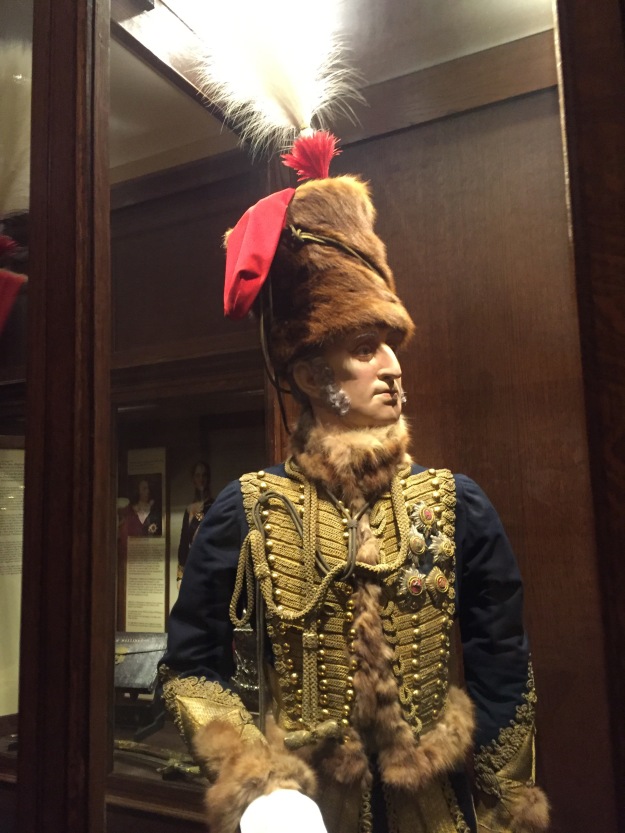 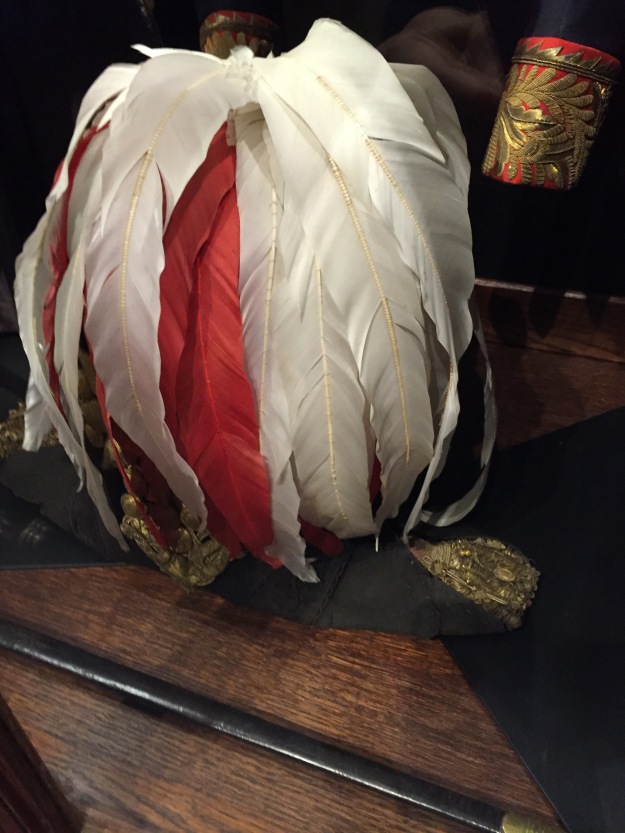 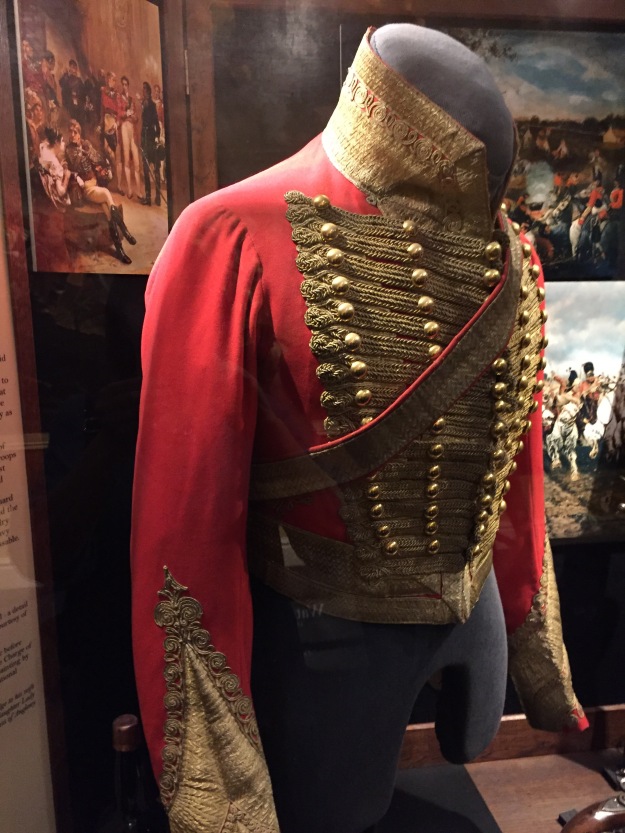 Another part of Plas Newydd displays stuff from the family’s colorful history. Henry was a distinguished historian, and well he might be. His ancestors included the first Marquess, Henry “One-Leg,” whose leg was shot off by cannon fire at the battle of Waterloo in 1815, while he was right next to the Duke of Wellington himself. On the occasion, Henry coolly said, “By God, Sir,    I’ve lost my leg.” The Iron Duke replied, “By God, Sir, so you have.” 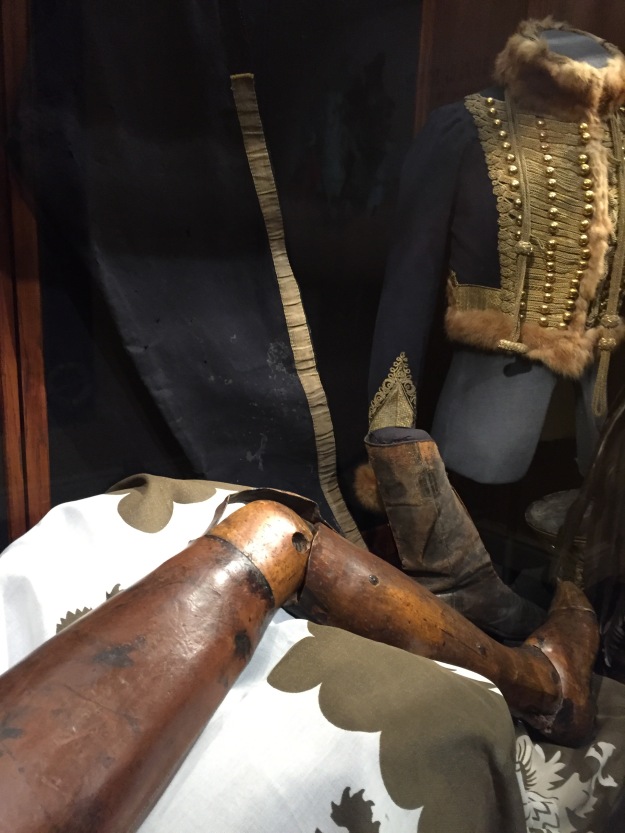 The Marquess had what remained of his leg amputated, with a stiff upper lip and no anesthetic, and was fitted with a wooden leg. Afterward, he fathered ten children and walked nine miles a day for the rest of his life. 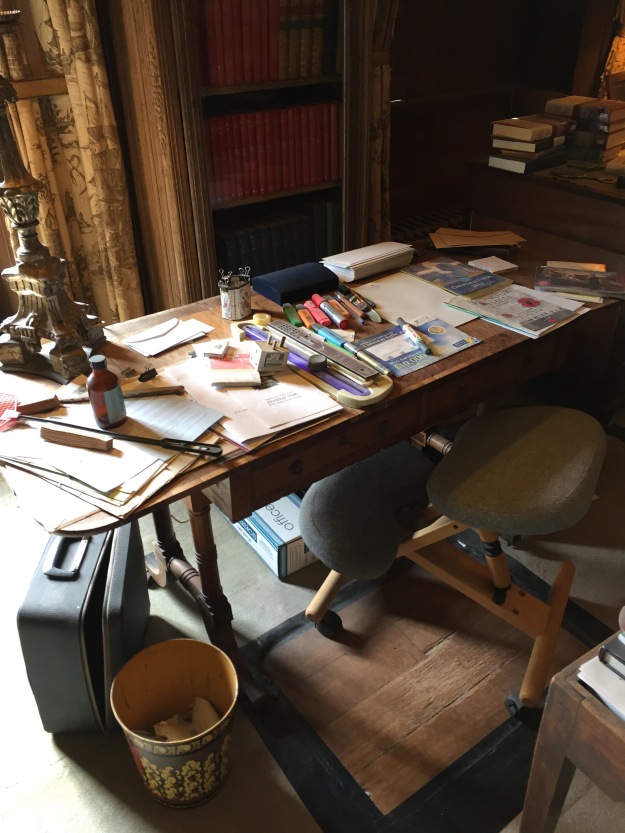 But back to the 7th Marquess. He must have been something of an artist as well as a politician and a writer. He kept a special drawing table, under a window with good light. Of all the rooms in grand homes that I’ve seen, Henry’s study is one of my favorites. 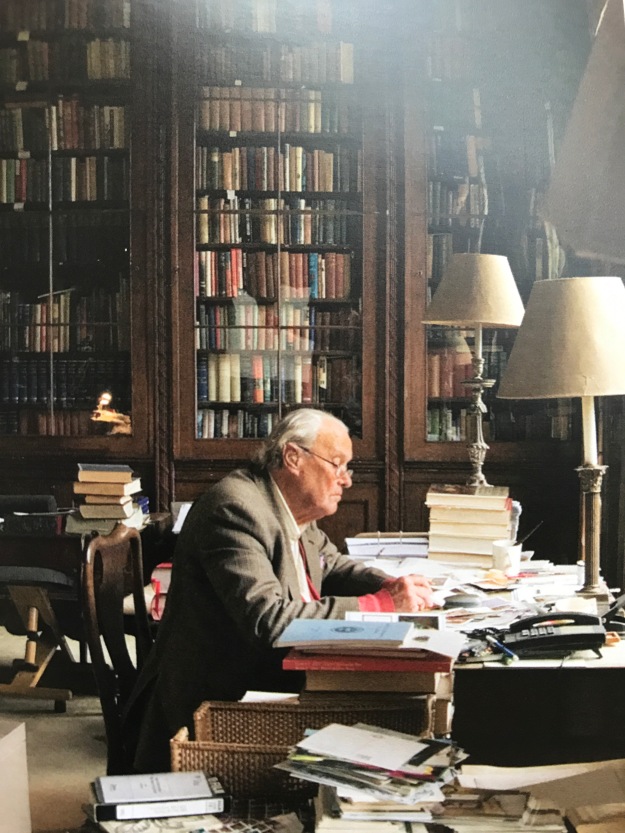 I can see him happily puttering around, going from one table to the next. The jumble made perfect sense to him. He just kept a separate place for each one of his many projects. If only I had the space to do the same. 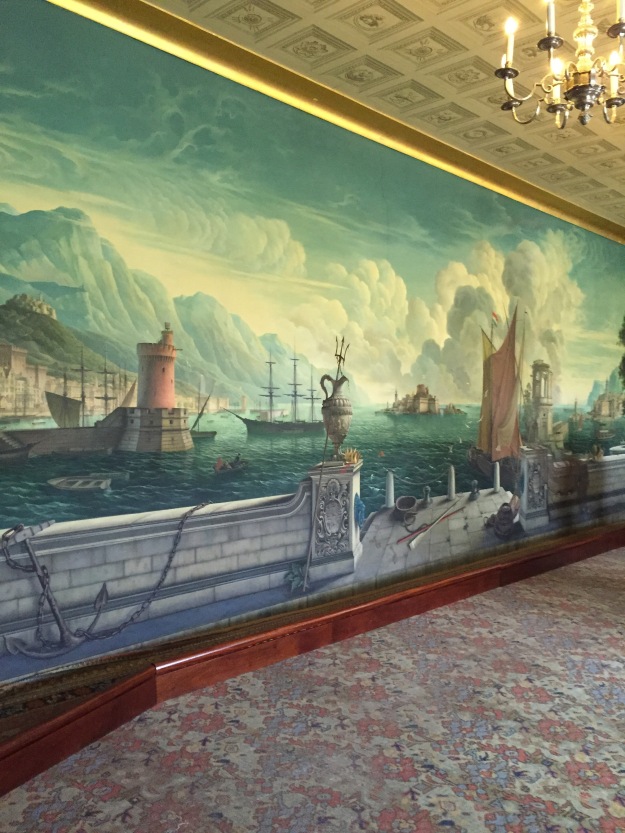 The other unforgettable room at Plas Newydd is the dining room. In 1936, the 6th Marquess commissioned Rex Whistler to paint the entire long wall as a mural.

The artist was happy to spend endless hours on the mural, partly because he was in love with one of the daughters of the family, whom he also painted. Tragically, Rex Whistler was killed in action in Normandy in July 1944, having insisted on fighting rather than serving in some less dangerous way. He had just arrived at the front. 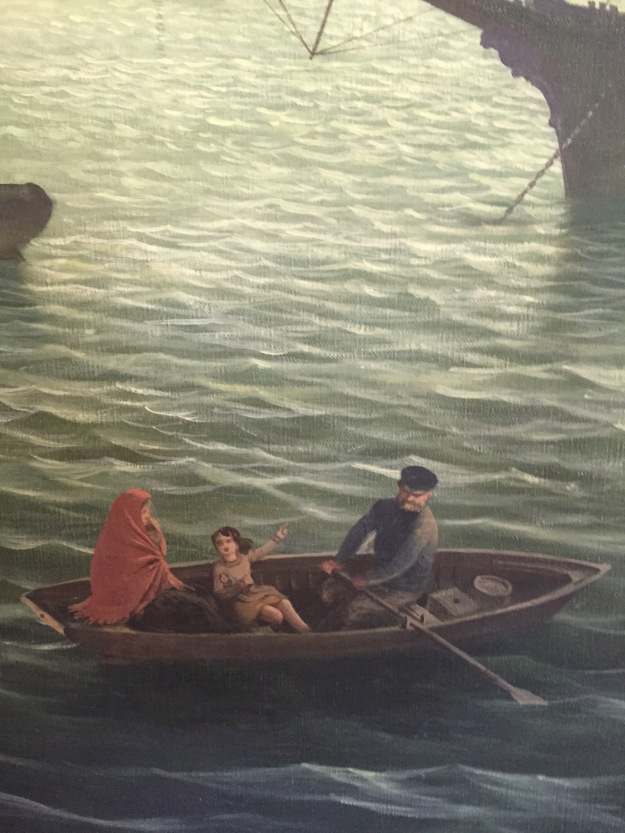 I could spend hours taking in the detail of the Whistler mural, which is full of gentle humor and family references.

If I get to return to Plas Newydd, I’ll try to find time to look into the grounds and gardens, another interest of Henry’s. 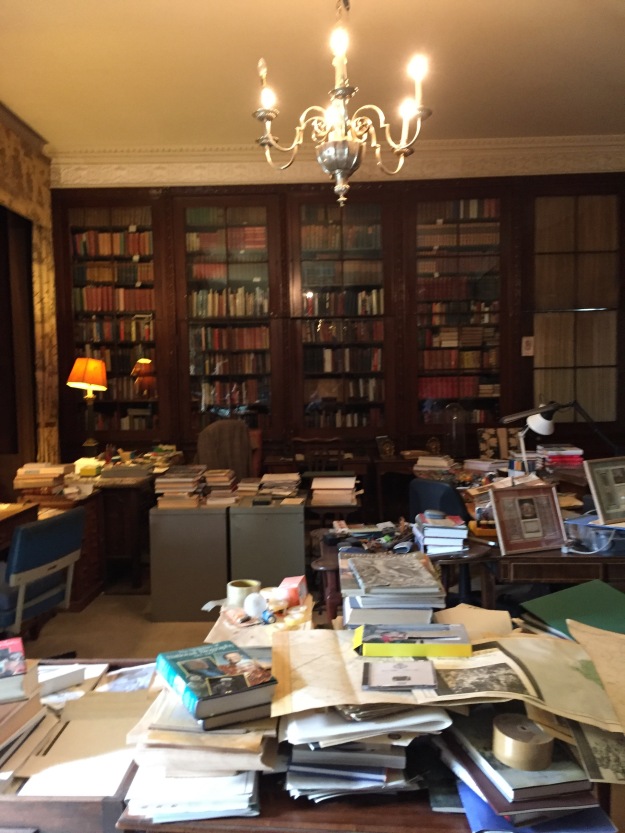 Meanwhile, I’ll dream of having a room all my own, like Henry’s. “A man of parts” is the British term for a multi-talented Renaissance man.Henry is the best example I know of. Now, about my basement storage room…

There’s an article about the 1st Marquess at: