Sometimes I come face to face with how little I know about non-European cultures. For example, who made this life-sized mask and how  was it used? Was it made to scare the pants off anyone who looked at it, or is it just me? Well, this particular mask was found in the grave of a high-ranking person in Peru, dating from around 900 to 1100 A. D. Possibly there were demons to scare off?

In the fall of 2017, the Getty Center in Los Angeles has a spectacular exhibit called “Golden Kingdoms.” I was immediately attracted because the poster had kind of a Viking look. But no! Instead, it’s a completely different set of cultures, with artifacts from all over the Americas. The objects, all of them with sacred meaning, date from 1200 B.C. up to the beginning of European colonization in the 1500s.

It’s not all bling, at least as we understand bling. The Incas valued feathers and textiles above all else. There’s a perfectly preserved wall-sized rug made entirely of tiny blue and yellow feathers. It was preserved because it was hermetically sealed in an ancient grave.

Peruvian artists of the Moche culture, around 200 A.D., made these heavy mosaic ear ornaments, about the diameter of baseballs. They depict a pair of gorgeous running animals, maybe owls. 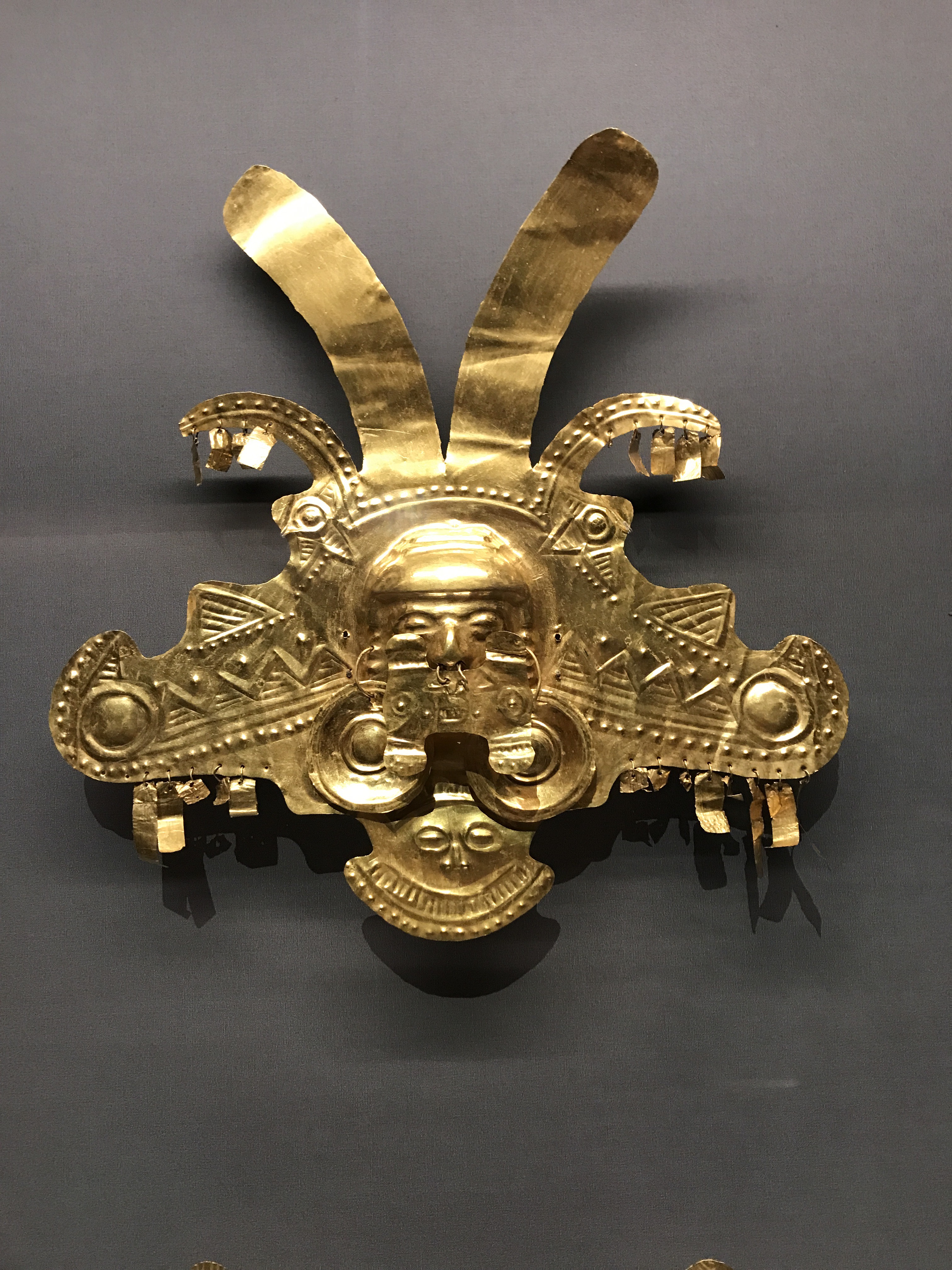 I was puzzled about how some of these ornaments would be worn, until I took a close look at a breastplate and diadem belonging to a ruler of the Calima-Yocoto, Columbia, all the way from 200 B.C. to 800 A.D. They wore nose ornaments! Not for the faint of heart. 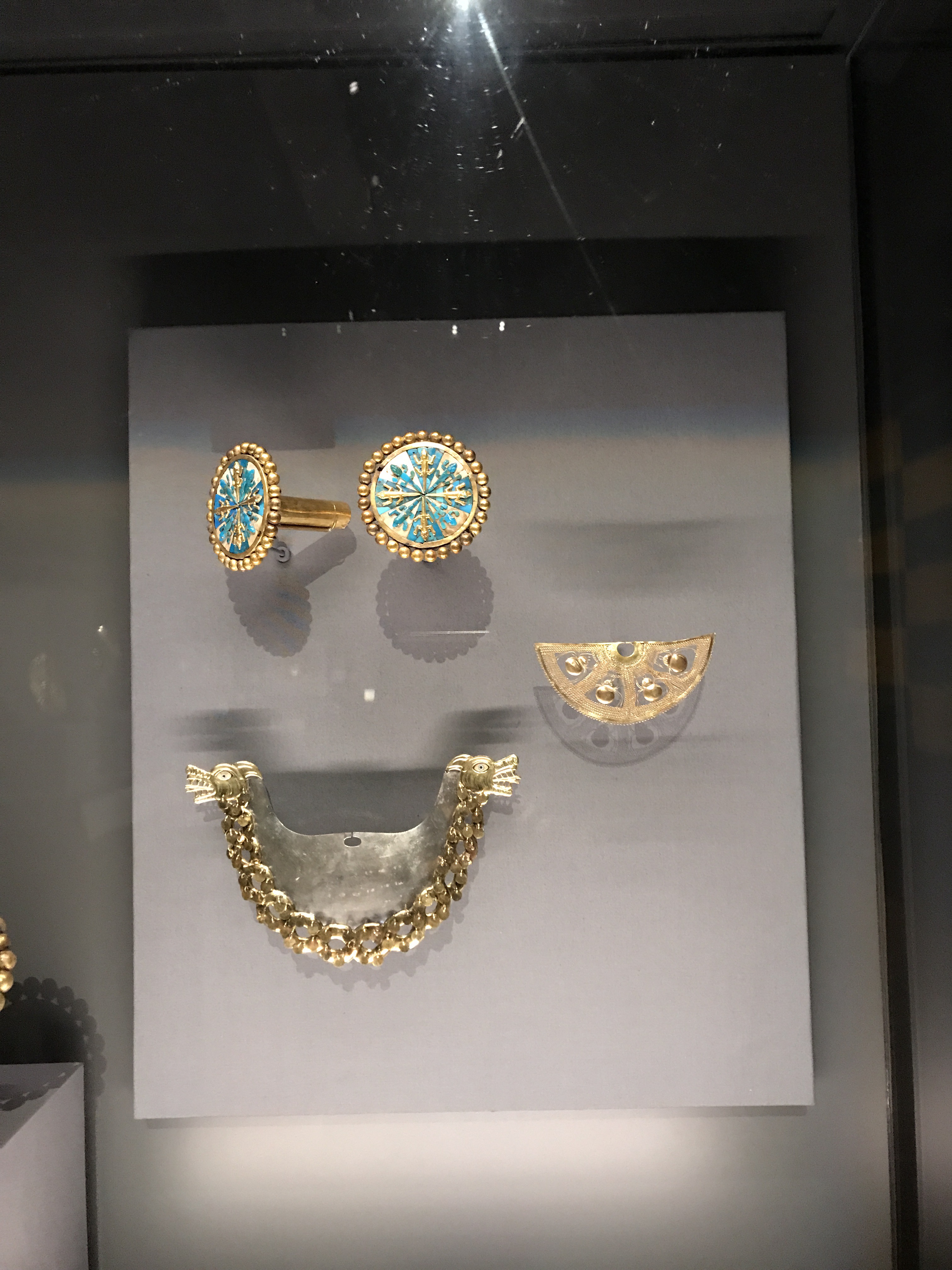 Nose ornaments were really a thing in these parts.  They look pretty uncomfortable to me–heavy, with a little slot cut out so they can be worn in the nostrils. Special occasion jewelry, I have to think.

This beautiful ceremonial knife from the north coast of Peru, around 900 to 1100 A.D., gave me pause. What kind of ceremony would that be? No doubt some kind of sacrifice was involved. 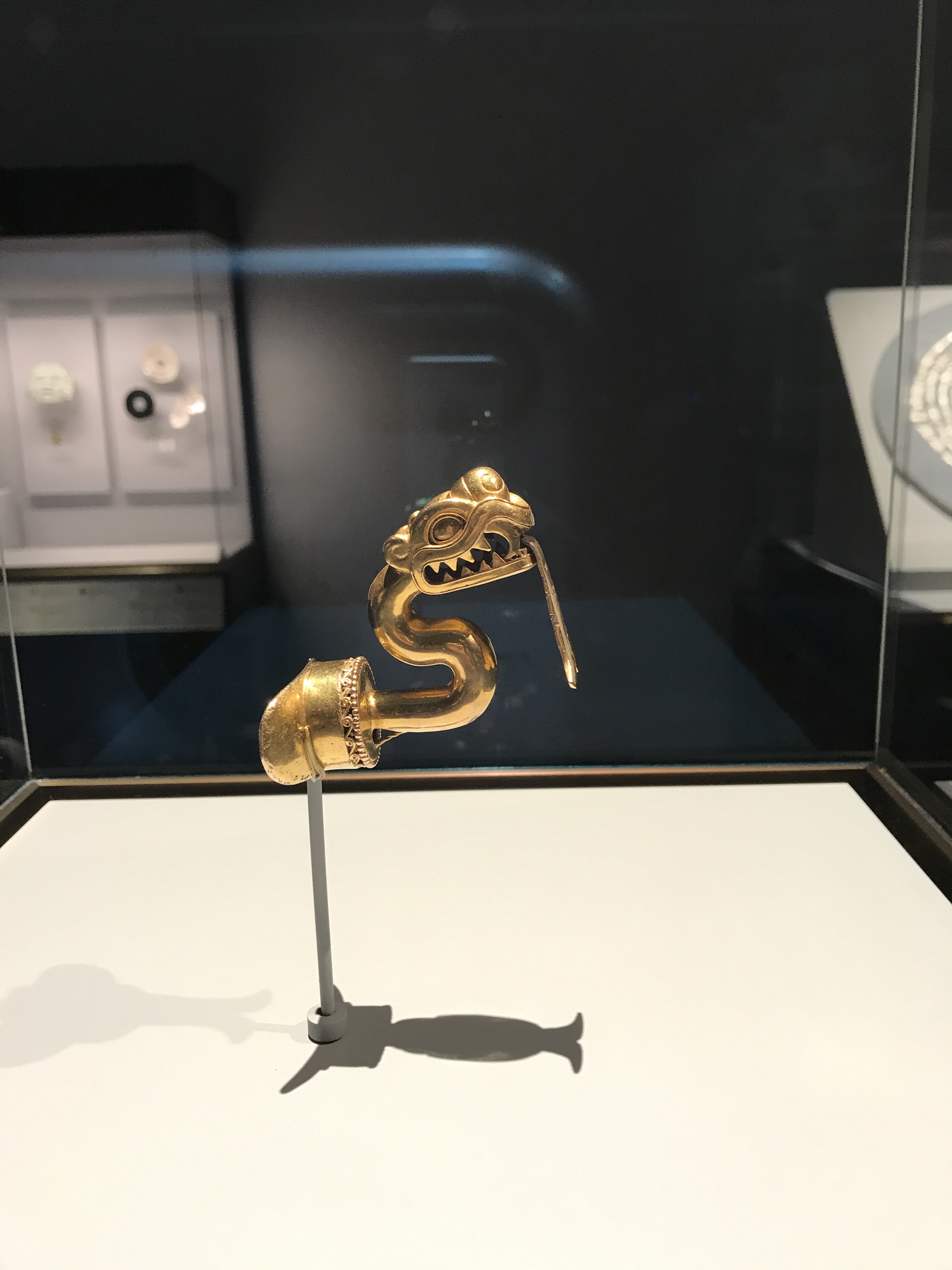 From the exhibit poster, I expected the dragon-like gold figure to be huge. But it was tiny, and took some hunting to locate. It’s an Aztec “labret,” an ornament signifying political or military power. It’s from Mexico, 1300-1500 A.D.

It was a mouth ornament in the shape of a serpent, made to fit in front of the wearer’s lips.

The tongue can be retracted, or flicked side to side in scary fashion. 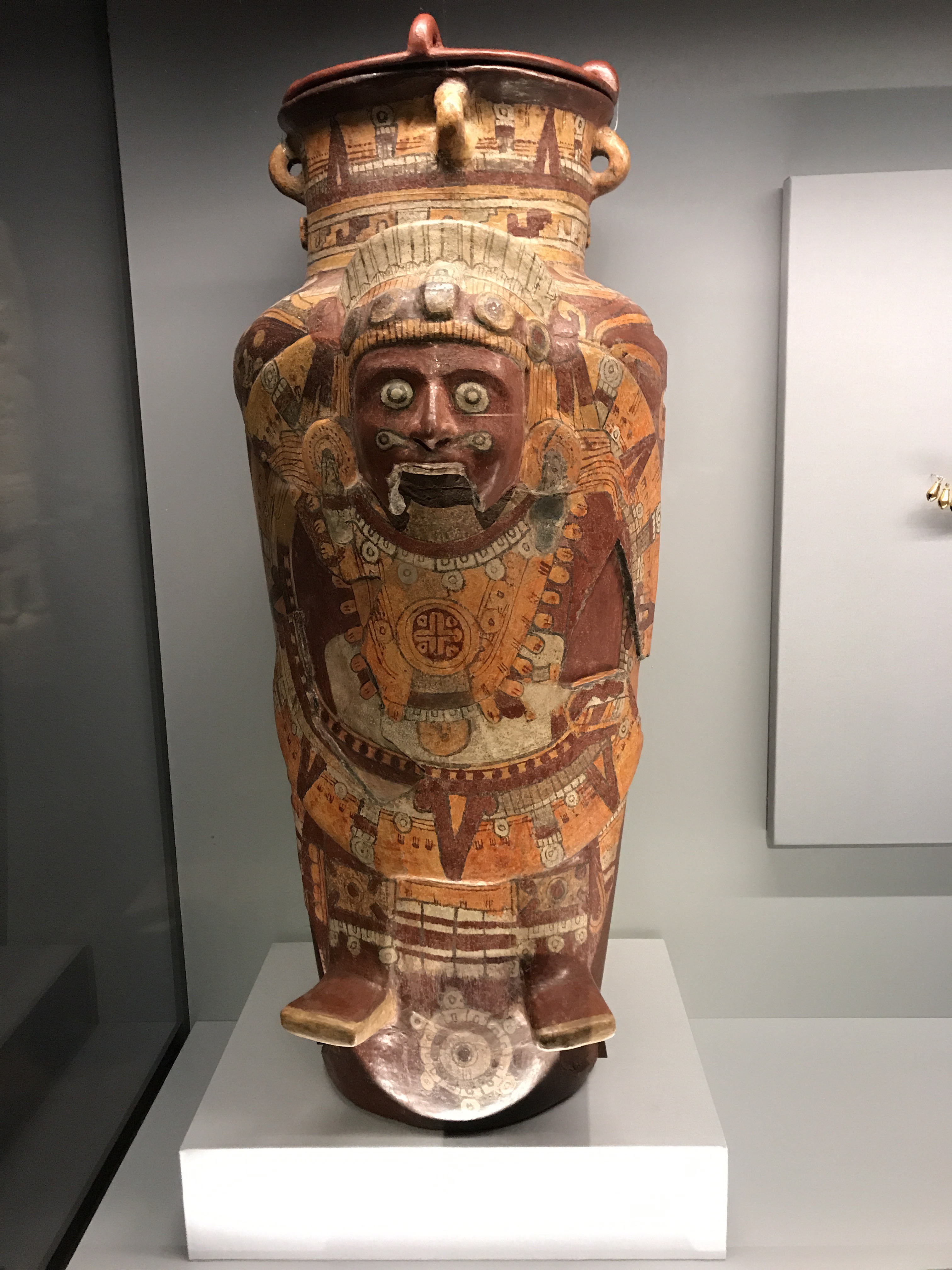 An Aztec effigy vessel from the same time period in Mexico depicts the Sun God. 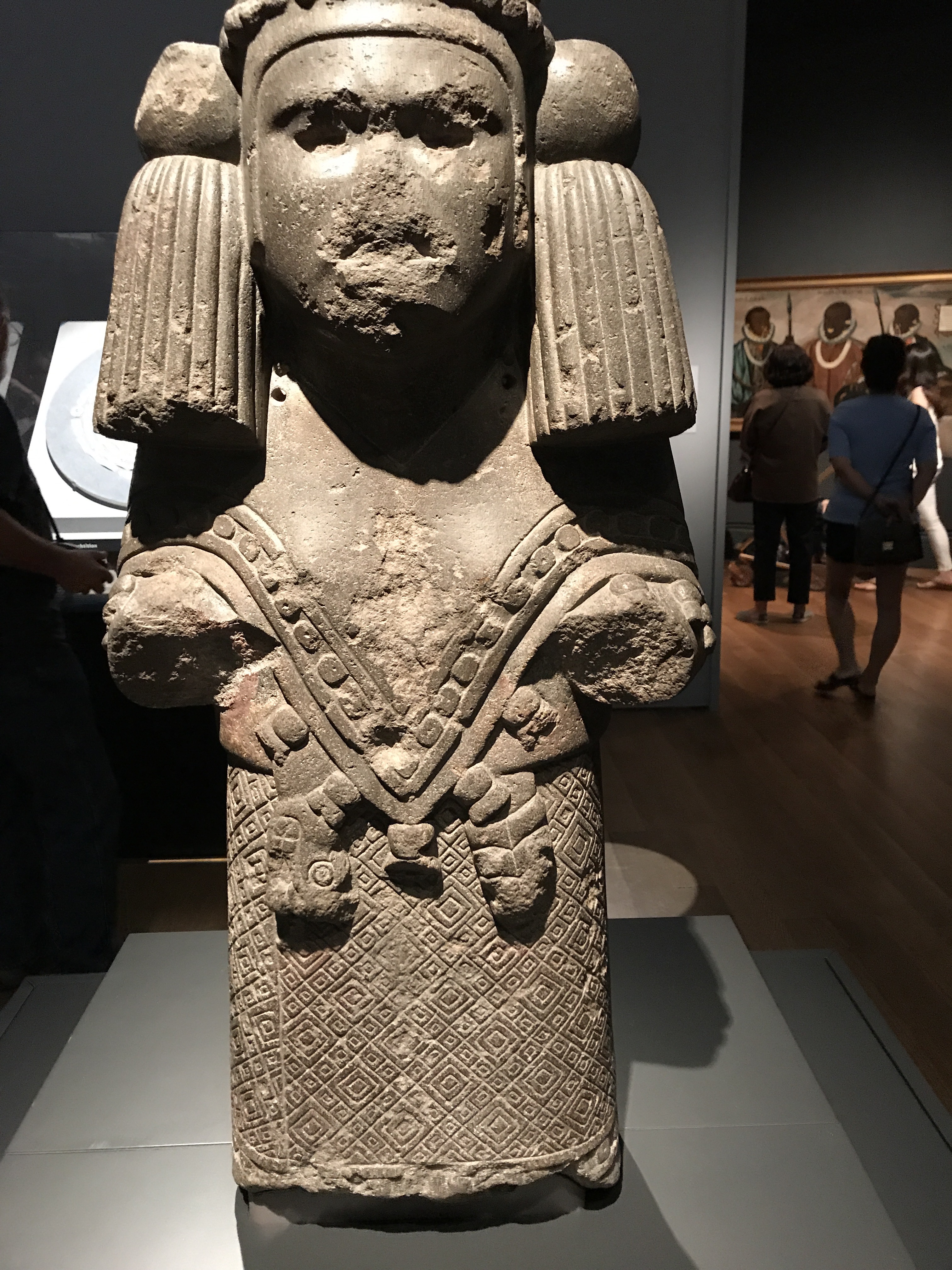 I especially liked this image of Chalchiuhtlicue, the Aztec goddess of lakes, rivers and moving waters.  Her name means “Jade Her Skirt.” Jade and other gemstones were valued more highly than gold in this time period, around 1500 in Mexico. 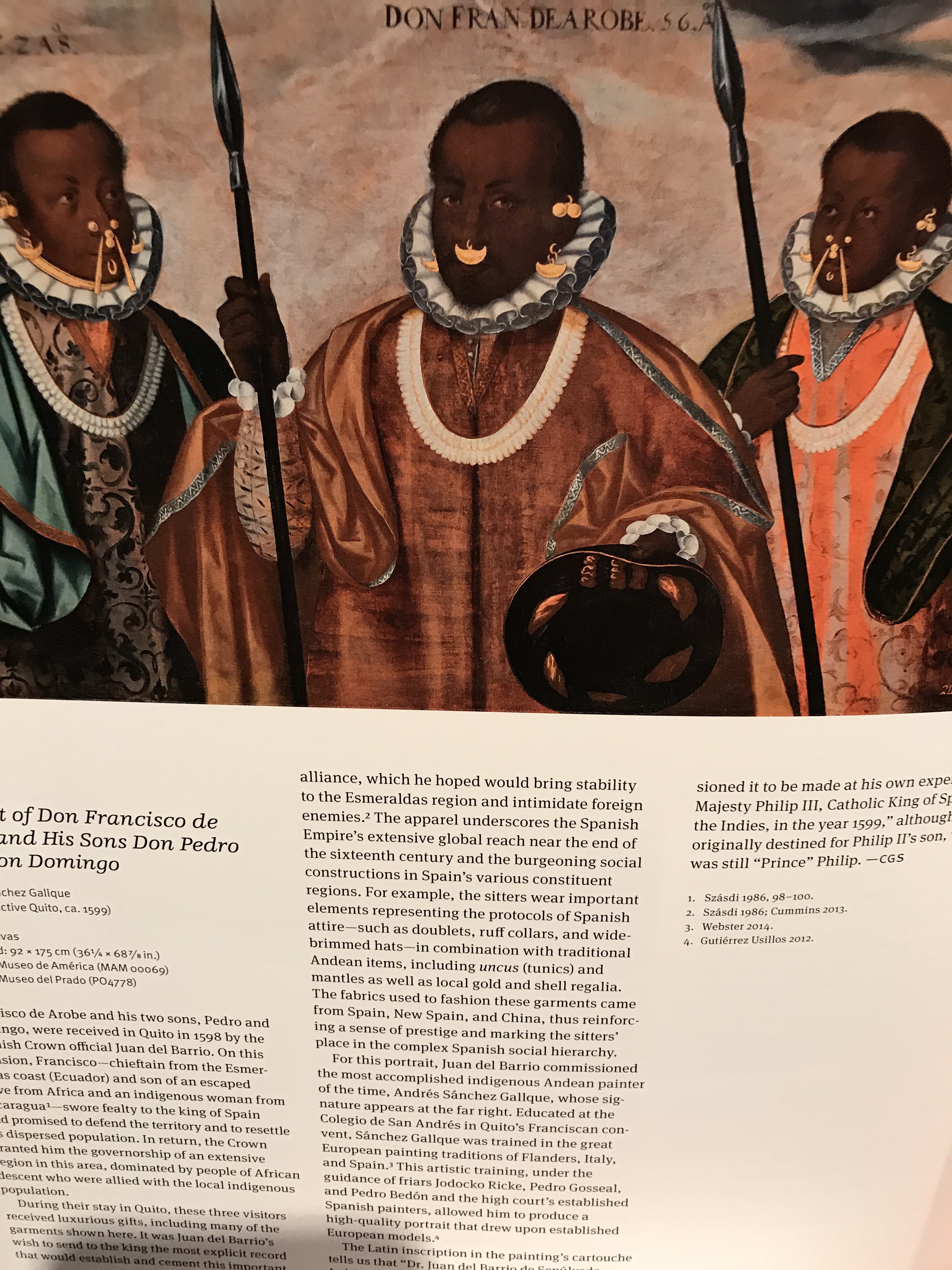 Spanish conquistadors began arriving in the 1500s, changing the native cultures forever. The spectacular painting above could not be photographed, but I sneaked a shot from the exhibit catalog. It shows a political leader from Ecuador and his two sons. In exchange for swearing fealty to the Spanish king, they were allowed to rule a large area. They naturally began dressing somewhat like Spaniards, but they kept their traditional nose and ear ornaments.

Christianity began to replace the age-old beliefs in gods and goddesses. This 1539 piece, composed of gold, paint, and tiny feathers, is a visual explanation of the new-to-the-Americas sacrament of the Catholic communion.

The new rulers of the Americans needed to catalog their new possessions. The book shown above is part of the Codex Mendoza. It carefully lists everything paid as tribute from the native Aztec people to their conquerors, the Spanish. It reminds me of the Domesday book that the Normans compiled in 1086, after they conquered England in 1066. 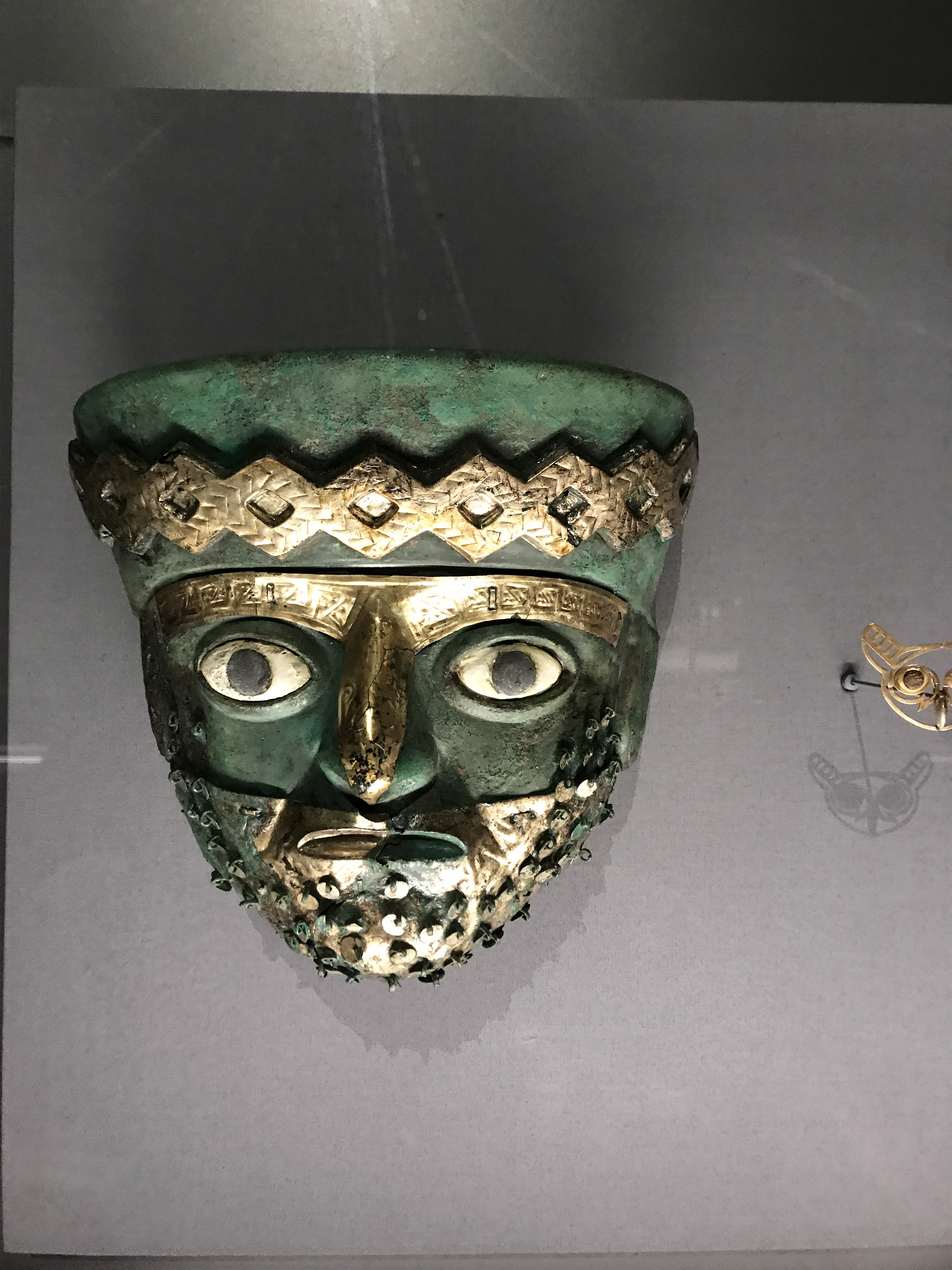 The mask above is from the grave of a long-dead young warrior, around 525 A.D.  He’s a fearsome sight, but does he also look a little apprehensive about what comes next? None of us know what’s in store for us. Still, we keep studying the past for clues and maybe some understanding.

There’s an article about this exhibit at:

2 thoughts on “Golden Kingdoms at the Getty”