Of all the cities I’ve visited, Prague felt the most foreign.  For one thing, I didn’t know even a smidgeon of the language. In fact I didn’t even recognize the letters of the alphabet.  Peering out the train window, I passed several stations that could have been the main station.  The family in the compartment with me kindly stopped me each time I jumped out of my seat.  They saw to it that I got off at the right place, and there I stood on the platform, as directed by the rental agency, waiting for a driver to fetch me.  Hailing a cab outside the station is perilous.

The money is foreign, too, and tourist guides are rife with warnings of ripoffs of unwary travelers.

Even the apartment rental agency was not quite trustworthy.  A day before my arrival, they emailed me that the apartment I had rented needed some maintenance work on my first day, but I could have a cheaper one and they would refund the difference in price.  Then, when I arrived, they tried to get me to stay in the cheaper one.  After the first night, I insisted on moving to the original apartment, which was much bigger, much nicer, and had air conditioning.  Only after I had checked out and carefully checked my bill did I realize that they never did refund the money due me from the first night.  It took numerous emails to sort that out.

Still, the city is beautiful. The architecture is unique, all tall painted houses and towers festooned with smaller towers. 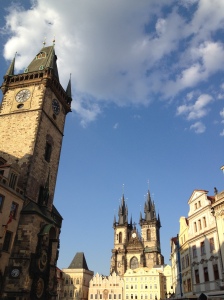 When I returned home, I talked with an elderly relative who had been in Prague just at the end of World War II.  His face darkened when I asked him about it.  He said he had witnessed things he just wanted to forget. Today, the people crowding the streets and restaurants seem full of joy, as though they had just emerged from an oppressive regime yesterday.  Maybe I didn’t spend enough time in Prague to appreciate it.  I see another visit in my future. Then there’s Krakow in Poland, which I’ve never seen…