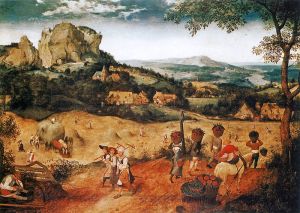 Pieter Breugel the Elder painted a series of six seasonal landscapes in around 1565.  Each represents two months of the year. Five of them survive, including the beautiful and haunting “Hunters in the Snow,” now exhibited in the Vienna Kunsthistorisches Museum.

The Lobkowicz Palace in Prague has the June and July panel, titled “Haymaking” or “The Haymakers.”  It is as warm and inviting as the winter landscape is cool and mysterious.  The painting depicts peasants moving through their time-honored routines of bringing in the hay.  A small image hardly does justice to the glorious painting.  Pieter Breugel was known in his lifetime by the nickname “The Peasant” because he often dressed in peasant clothing so that he could blend in and observe his subjects for long periods of time.  The people in this painting have a natural nobility and a natural connection with the agricultural landscape that sustains them.

Prague is not my favorite city.  Years after the fall of the Iron Curtain, it is still pretty rough around the edges. I rented an apartment from an agency there.  I asked how to get from the train station to the agency office.  I was told to wait right on the train station platform for a driver to collect me.  According to Rick Steves, hailing a cab outside the station invites severe overcharging or worse.  I guess that must be true.  Once I got settled, though, I felt perfectly safe in tourist areas. No doubt there are pickpockets, as in any large city, but I had no problems.

The city is a magnet for all of Eastern Europe, so it is full of partying crowds day and night.  But the Lobkowicz Palace, on Castle Hill, is a haven of peace.  The history of the palace  is fascinating.  The noble family lost everything to the Nazis, regained some of it, and lost it all over again to the Communists.  They were staunch opponents of both regimes.  The palace today hosts daily chamber concerts in a lovely, quiet music room. Afterward, a stroll through the grand rooms with an audioguide provides a unique glimpse into the turbulent history of the city, seen through the ups and downs of an aristocratic family. There’s a nice restaurant with views over the rooftops of Prague.