In Amsterdam’s Rijksmuseum, I noticed a lot of people pausing in front of a particular portrait, depicting a fat young man named Gerard Andriesz Bicker in 1639.  Dressed in fine silks, velvet and lace, he looks particularly satisfied with himself.  If Gerard had posted this portrait on match.com, I suppose he would have expected a lot of takers.  People in the museum pause, read the caption, and then move to the adjoining portrait, of young Gerard’s father. 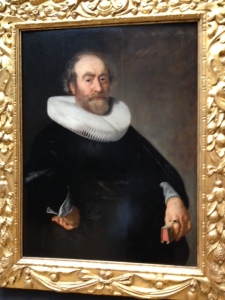 The father, Andries, was the mayor of Amsterdam at the time.  He appears as a stern, hardworking burgher, dressed in severe black.  He wears the stiffly starched and pleated collar so popular among the elite at the time.  These collars took about 18 yards of fabric to make and had to be painstakingly hand-pleated.  They held a person’s head high and made it impossible to lean back and relax.  One can only imagine what opinion Andries had of his spoiled-looking son.  The son’s caption notes dryly that young Gerard did not attain offices as high as those of his father.  No kidding.

Both portraits were painted by Bartholomeus van der Heist, 1613-1670.  He was Rembrandt’s chief rival in the contest to get the most lucrative portrait painting jobs among Amsterdam’s rich and famous. Apparently young Gerard was pleased with his portrait.  His father must have been pleased enough with both portraits, too.  After all, he paid for them.

Join me next time as I explore the art and history of Europe!