Arriving in Strasbourg, France on a Sunday evening, I came upon a group of people gathered to dance in the moonlight in the plaza between the cathedral and the palace of the bishops.  It looked like a weekly gathering of friends, mostly young but some old. The setting could not have been more elegant.

The magnificent Gothic cathedral took about 400 years to build.  It was completed in 1439. During the French Revolution, it became a Temple of Reason.  HItler visited in 1940, after his armies steamrollered across the French border. He wanted the landmark cathedral to become a “refuge for the German peoples.” The city of Strasbourg was only returned to France after Germany’s defeat.

The Baroque Palais Rohan was built between 1731-1742.  It was once occupied by Hapsburg bishops under the Holy Roman Empire.  At one time Napoleon Bonaparte took over and remodeled parts of it to his own taste.  Actually, it is hard to find a corner in Europe where Napoleon did not make some kind of mark. 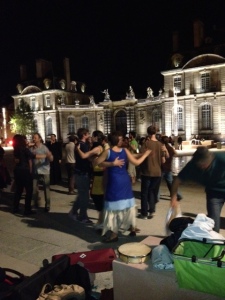 Through centuries of political changes, the local people have carried on their own cherished traditions no matter who ruled them.  Dancing is one such tradition.  Before each dance that I watched, a pair of young women conferred with a flutist and a violinist.  Then they all began a tune, blending in sweet harmony.  Couples stepped, promenaded and twirled around the musicians.  The dances were graceful, but fairly simple and repetitive.  I imagine they’ve been performed at weddings and village festivals for generations.

Maybe because dancing was so important Strasbourg, it once got out of hand.  In 1518, there was a Dancing Plague.  Several hundred people were victims of a kind of mass hysteria which caused them to dance nonstop for weeks.  Most if not all of them finally died of heart attacks or exhaustion.

The dancers I watched on a clear fall evening looked happy and healthy.  Long may they dance!