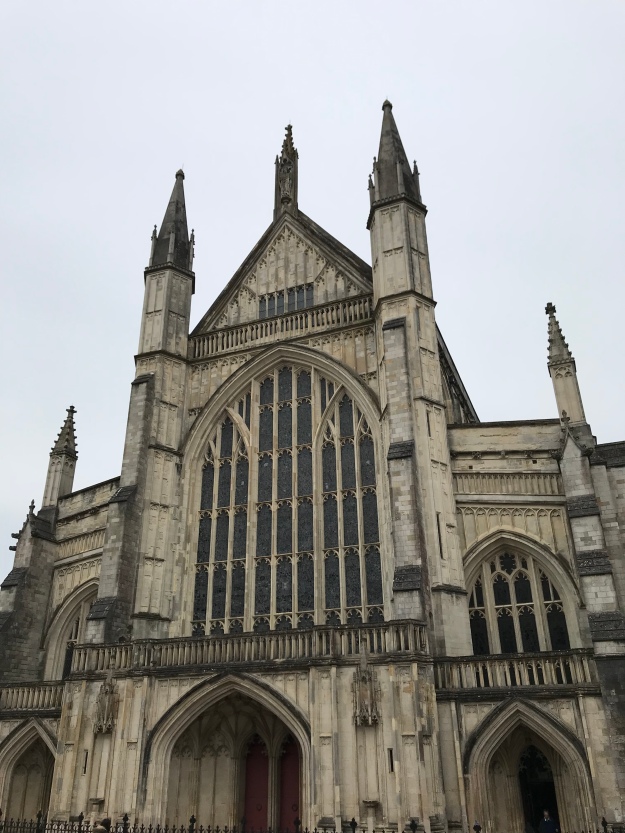 When Jane Austen died in 1817, she was not famous. She was buried as a gentlewoman beneath the floor in the north aisle of the nave of Winchester Cathedral, with no mention of her as a writer. She had published four of her great novels while living at Chawton, but readers did not know her name. The title page read, “By a Lady.” 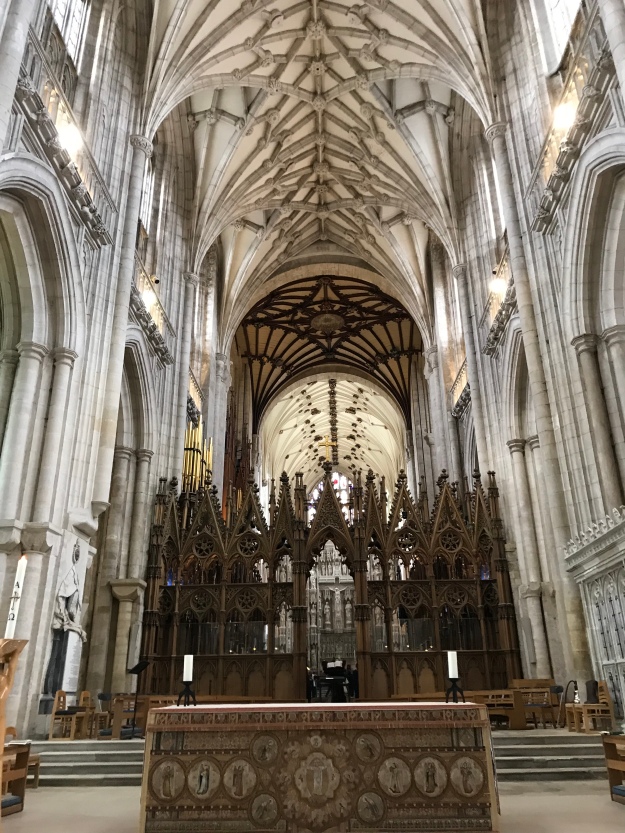 I finally made a visit last spring, after visiting Jane’s cottage home in Chawton and the “great house” that played a big part in her most productive years.

No doubt Jane knew the medieval cathedral well, having lived the last eight years of her life in nearby Chawton Village. She spent the last eight weeks or so of her life in Winchester, undergoing treatment that didn’t work. (Theories about her illness include Addison’s disease and Hodgkin’s lymphoma, among others). 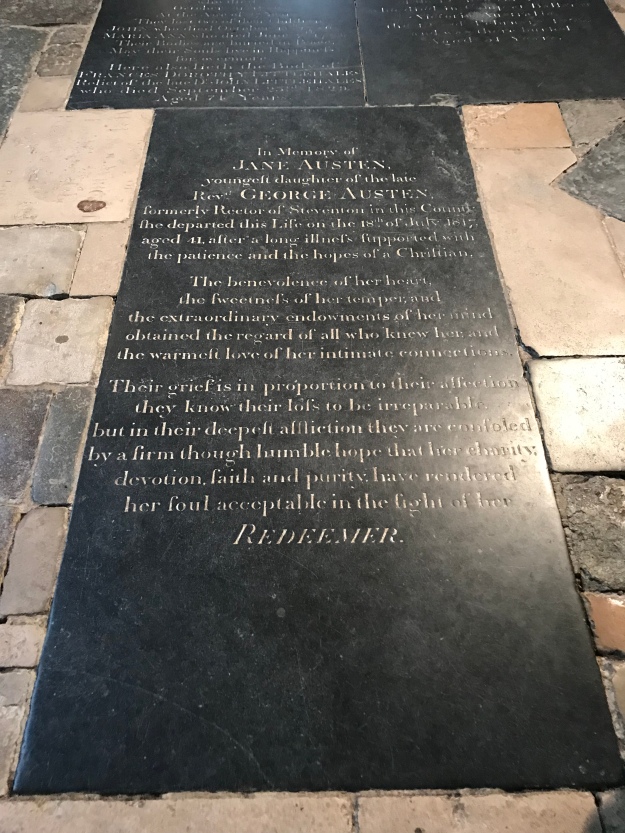 Jane lies underneath the stone floor. Her brothers James and Henry arranged the burial. Her tombstone refers to “the extraordinary endowments of her mind,” but the emphasis is on her qualities as a proper Christian gentlewoman, not her genius as a writer and satirist. Only four people attended Jane’s brief funeral service in 1817. She has much more company now.

I’d like to think Jane was familiar with the Holy Sepulchre Chapel. 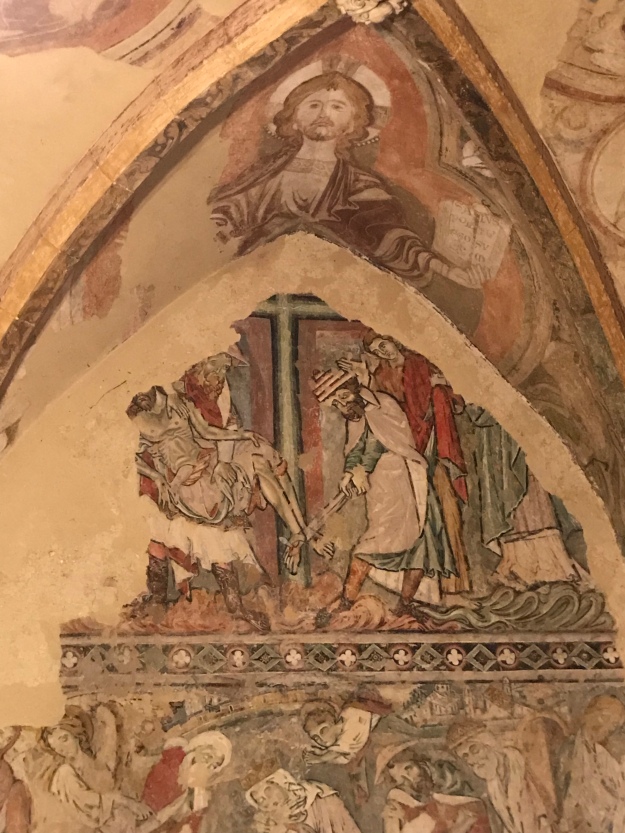 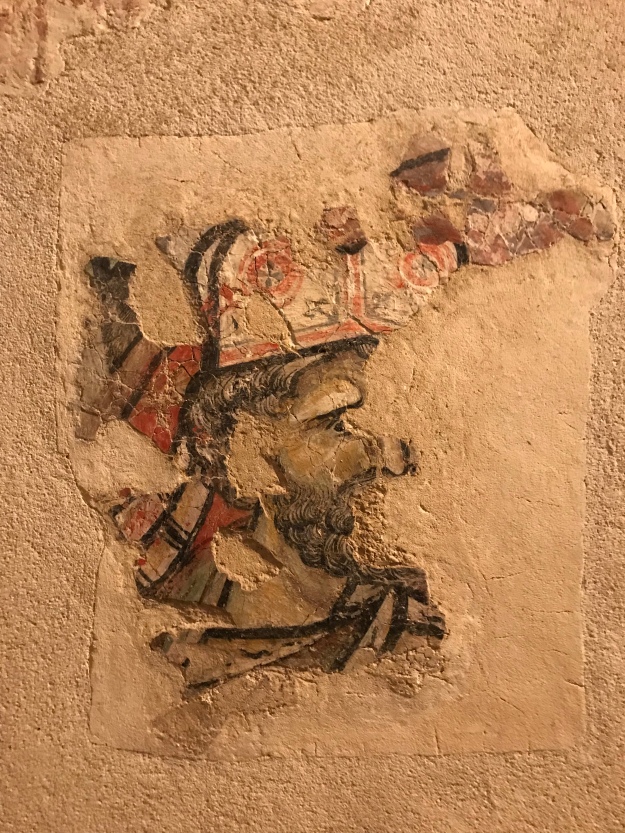 The chapel’s wall and ceiling paintings date from the 12th and early 13th centuries. 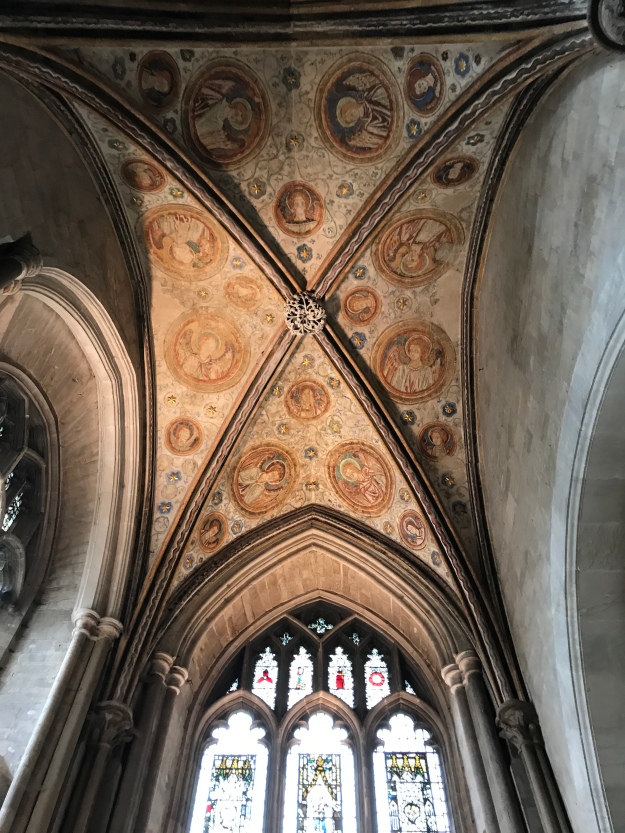 Even more, I’d like to think Jane once stood and gazed up at the exquisite ceiling of the Guardian Angels Chapel, dating from around 1240, by Master William, the King’s painter. 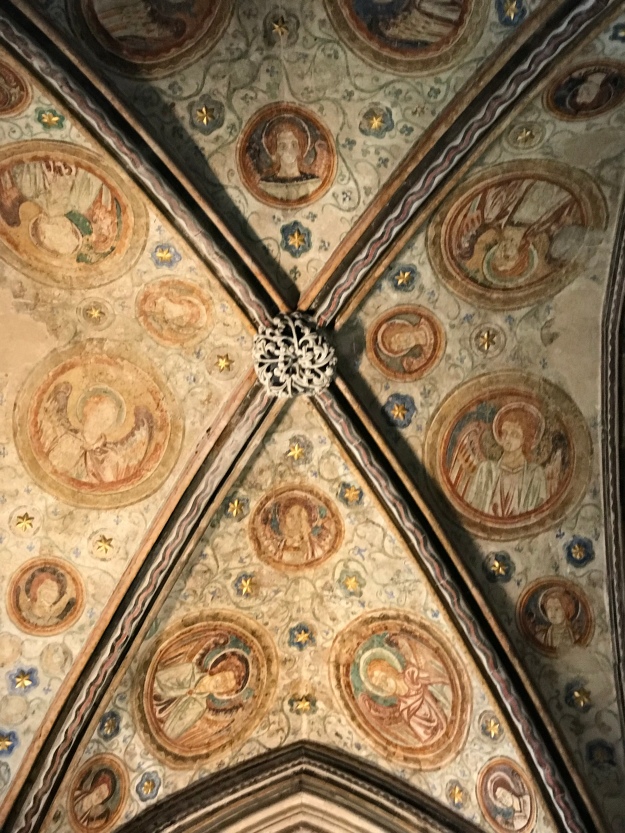 That would have been King Henry III. The ceiling was restored in 1959, so Jane may not have seen it at its best. But I like to think the guardians angels watch over her anyway.

The cathedral has a nice display about Jane on banners and signs in the north aisle.

One sign explains that by around 1850, as Jane’s identity as a writer came out and her fame began to grow, visitors were coming just to see her grave.

In 1870 Jane’s nephew published a memoir about her and used the proceeds for a brass plaque on the wall near her tomb.

By 1900, a public subscription paid for a memorial window above the brass plaque.

Aside from the Jane connection, Winchester is a fascinating cathedral. The building was finished and consecrated in 1093, after all. It still functions as a church, and it’s possible to wander without crowds of tourists.

The beautiful illuminated Winchester Bible, used by the 60 to 80 monks in residence in the 1100s, is worth a visit all by itself.

I especially like the huge heavy “flying” buttresses that hold up the cathedral walls from outside. They form a sort of secular cloister which locals use all the time. I like to imagine Jane attending a service, then hurrying home with a new plot twist or turn of phrase. Maybe, for instance, “It is a truth universally acknowledged, that a single man in possession of a good fortune, must be in want of a wife.”