A few months ago in Amsterdam, I stayed at a bed and breakfast with especially trendy-but-funky decor.  One entire wall of my room was covered in little squares about the size of sample paint chips from the hardware store, all hinged together in an abstract design.  The shapes and colors were oddly familiar. 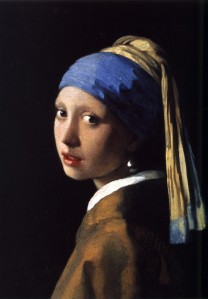 After about a day, I realized why the image was familiar.  Of course!  I was looking at an abstraction drawn from Johannes Vermeer’s “The Girl with the Pearl Earring,” painted by the still-mysterious master of light and shadow in about 1665 in Delft. Vermeer worked slowly on his small canvases of domestic scenes, but he lavished the extremely expensive blue pigment of lapis lazuli on his work, building up luminous surfaces from repeated glazes.

When I returned home, I watched the 2003 movie Girl with a Pearl Earring, directed by Peter Webber from a screenplay by Olivia Hetreed.  The story was taken from Tracy Chevalier’s historical novel of the same title. The painting creates a dramatic tension by its very subject matter:  the humbly dressed but beautiful young woman should not be wearing a priceless pearl earring. She is gazing back over her shoulder at the  viewer, as though caught in a guilty act. Yet she has an undeniable dignity and poise.

What’s the story here?  This is the question the book and movie explore.  In the Dutch Golden Age, as in our own time, the rich always find ways to exploit the poor. Scarlett Johansson is luminous as a servant girl pressed into service as a model for the artist.  Colin Firth plays the artist, who painted this masterpiece in 1665. The movie explores themes of class, creativity, the waste of human potential, and the tragedy of repressed talent. Repressed sexuality is there, too.

The movie asks a lot of questions. How can the powerful rich be reined in? How far should an artist go to pursue a vision? What happens if a poor girl happens to have artistic talent? Colin Firth is in fine smoldering form, and Scarlet Johansson gives him plenty to smolder about. Tom Wilkinson and Cillian Murphy (of the high cheekbones and piercing blue eyes) round out the cast. The film was nominated for Academy Awards, the BAFTA, and Golden Globes. Unfortunately it fizzled like a seventeenth-century candle at the box office, but I have it on DVD for those times I really need to retreat to the Dutch Golden Age.

In my Amsterdam room, once I realized I was looking at a pixellated version of a masterpiece, all I wanted was to see the masterpiece itself in all its glory. The Rijksmuseum in Amsterdam has several Vermeers. But this particular painting is not in Amsterdam; to see it, I’ll have to travel to the Mauritshuis Museum in The Hague.  Time to plan another trip!

Last week in Washington, DC,  sights like the Lincoln Memorial and the new Martin Luther King Memorial made me think about the history of slavery. A film now in theaters examines slavery, and race, from a unique perspective.

“Belle,” written by Misan Sagay and directed by Amman Asante, is a 2013 film about a real person, Dido Elizabeth Belle. She was the niece of William Murray, 1st Earl of Mansfield and Lord Chief Justice of England and Wales. She was the daughter of his younger brother, a Royal Navy Admiral, and a free black woman who had died. She was left in the care of her uncle to be a companion to her cousin, Lady Elizabeth Murray. Belle was raised as an aristocrat even though she was black. In the film, certain lines are drawn: Dido is not allowed to sit with the family at evening dinners when there is company,  but she is welcome in the drawing room afterward. Actually, little is known about Belle’s life, but the filmmakers have fashioned an absorbing story based on real-life events close to Belle.

Just as she was coming of age, Belle’s uncle had to decide a notorious case in which owners of a slave ship, the Zong, had thrown their cargo of slaves overboard in order to collect the insurance on their “property.” The Lord Chief Justice’s ruling was eagerly anticipated all across England.  If he went one way, slave traders would have a free hand in the future. If he went the opposite way, his ruling would spell the beginning of the end of slave trading in England.

To further complicate matters, Belle inherits a sizable fortune on the death of her father, while her white cousin is penniless.  Suddenly Belle has aristocratic suitors.

In 1779, Belle’s uncle commissioned a portrait of his two young nieces. The portrait is unique because it is one of the very first paintings that depict a black aristocrat as an equal to a white aristocrat. The painting, by an unknown artist, hung until 1922 at Kenwood House in Hampstead, where Belle grew up.  It is now at Scone Palace in Perth, Scotland.