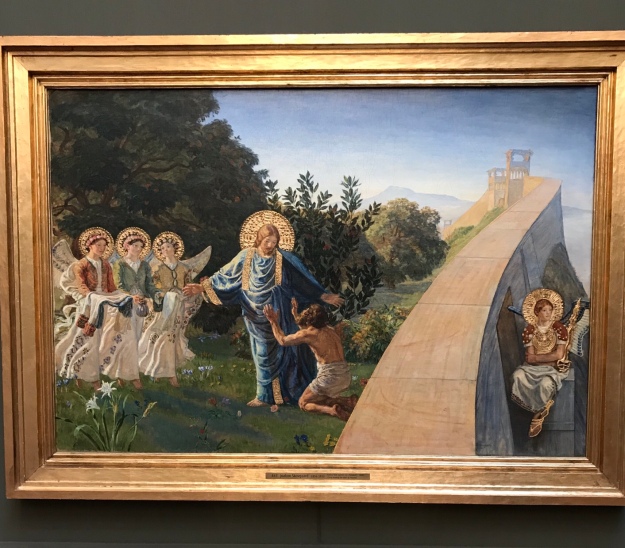 Last winter in Copenhagen, I admired a very unusual Easter-themed painting in the Hirschsprung Gallery. Joakim Skovgaard painted it as an altarpiece in 1890. The title is translated as “Christ Welcomes the Penitent Thief into Paradise.”

In the Biblical account, one of the thieves executed with Christ admitted his sins, repented, and begged desperately for help. Christ promised him, “Today you shall be with me in Paradise.” I’ve never seen this event depicted anywhere else, maybe because I’m not Catholic. I understand the Catholic Church celebrates the feast day of this man, now called St. Dimas, around Easter time. I think his feast day is March 25.

I admire the gentle realism of the painting, along with the liberal use of gold leaf. Three angels with gold haloes AND rose wreaths stand ready with new clothes and a pitcher of water. They look like very earthly angels, wearing pretty Scandinavian jackets and embroidered dresses. Their wings are barely visible; these angels could easily pass for kindly church ladies. (They’ve probably also made a nice casserole and some lemon bars for their newest guest). 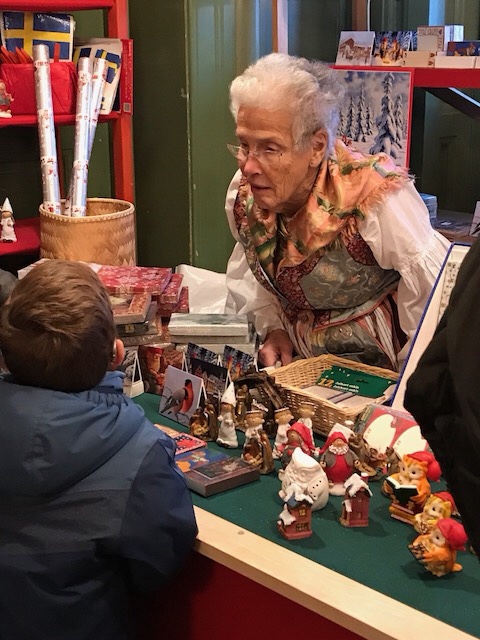 Above are some actual church ladies, for comparison. They were helping people at the Christmas bazaar at the Swedish Church in Copenhagen this past November. I have a high opinion of angels as well as helpful church ladies in pretty Scandinavian outfits. 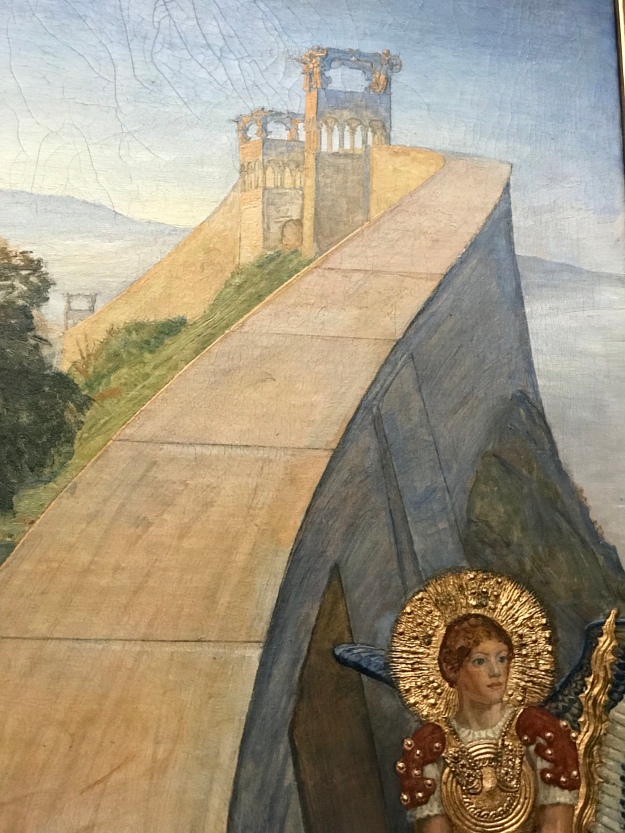 Paradise has a thick wall with guard towers and a narrow door. 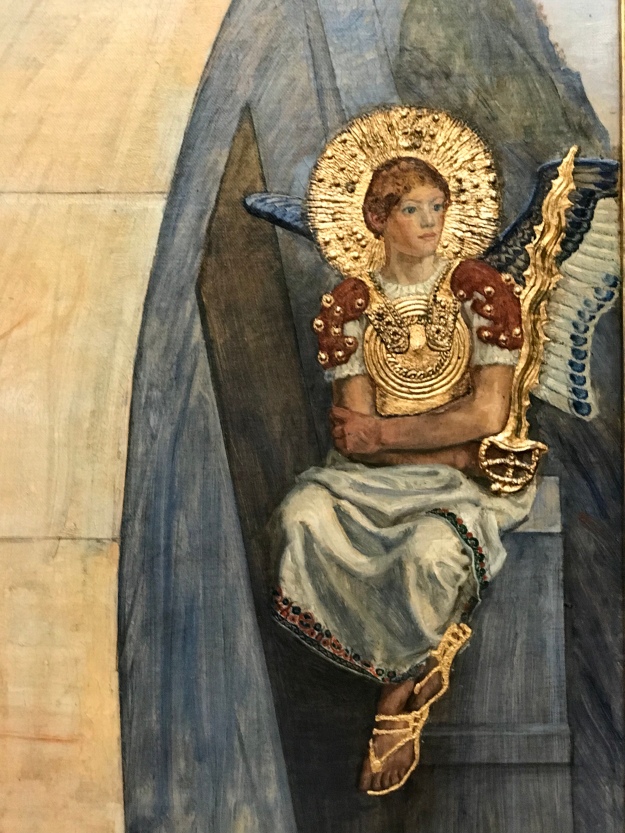 An angel with a flaming sword guards the door. I especially like this angel’s gold armor and comfy gold sandals.

So which side of the wall is Paradise? At first I thought the angel with the flaming sword was “inside.” But that side of the wall drops off sharply into nothingness. The flaming-sword angel perches on some kind of pillar beside the door, looking off into the nothingness in case anyone else approaches. I think Christ has already ushered the thief through the door and on into Paradise, which looks a lot like rural Denmark in springtime. Or maybe it looks like the Garden of Eden. But I don’t want to overthink the theology here, not that I know enough theology to overthink it. I just like the painting.

Religiously themed art is not very common outside of churches in Scandinavia. And the churches tend to be austere. This altarpiece must have been a real center of attention and worship. I’d like to have seen it in the church it was painted for.

For those who celebrate Easter more as the beginning of spring, here’s another Hirschsprung Gallery painting from the same time period. Fritz Syberg painted “Spring” in 1891-93.

A sturdy fellow in wooden clogs cheerfully rakes the bare soil. It looks like he’s been at it long enough to get a bit of sunburn.

Neighbors stroll and gaze off into the distance under flowering fruit trees. They look glad to be outside. Winters are long and hard in Scandinavia. But spring finally comes. 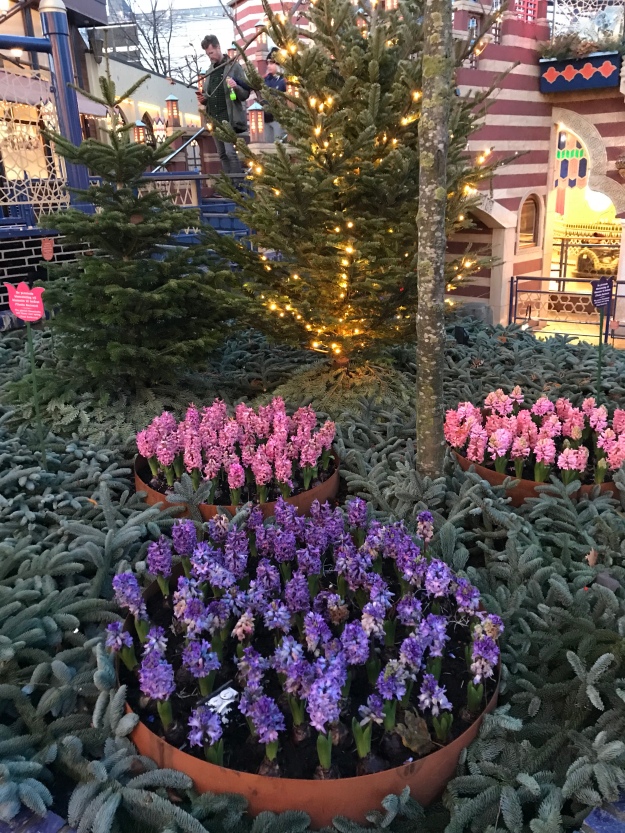 In nearby Tivoli Park last December, thousands of hyacinths were featured in the Christmas flowerbeds–a real novelty in the long winter. (Temperatures were around 40 degrees Fahrenheit, almost the same day and night. I wondered if the plants were dug up and put to bed in a greenhouse while the park was closed at night).

It wasn’t cold enough to snow in early December. The dusting of pretend snow on the hyacinths must have been sprinkled by human hands.

We were lucky enough to also be in Copenhagen last April (we liked it so much we went back in December). Even in spring, we bundled up in layers of sweaters and raincoats.

Actually, I think it was colder in April than in December. I was wishing I had a parka, or better yet, a onesie snowsuit like the ones all the kids wear.

Chilly or not, I’m sure the Tivoli flower beds are overflowing again this spring with tulips and daffodils. I’d like to be there again.

Rides either terrify or bore me. But I loved Tivoli in Copenhagen. The park opened in 1843, just outside the west gate of the still-walled old city. 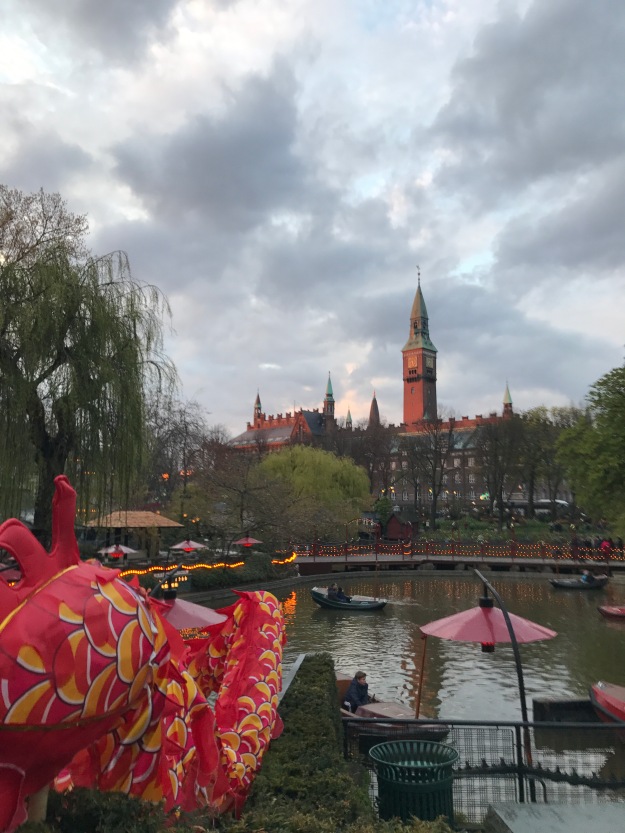 King Christian VIII was worried about social unrest at the time. Workers all over Europe were annoyingly demanding higher wages and shorter hours. The founder of the park, George Carstensen, convinced the king that if the people have a place to amuse themselves, “they do not think about politics.” As the city expanded, Tivoli became almost the center. That’s the tower of the City Hall in the background. 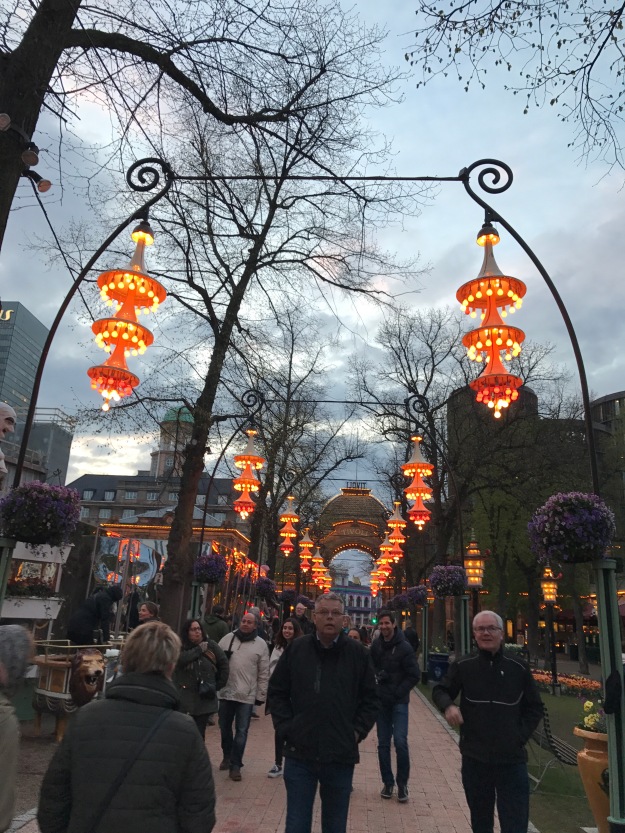 I visited at twilight because I wanted to see the fabled lights.

The daffodils were perfect. 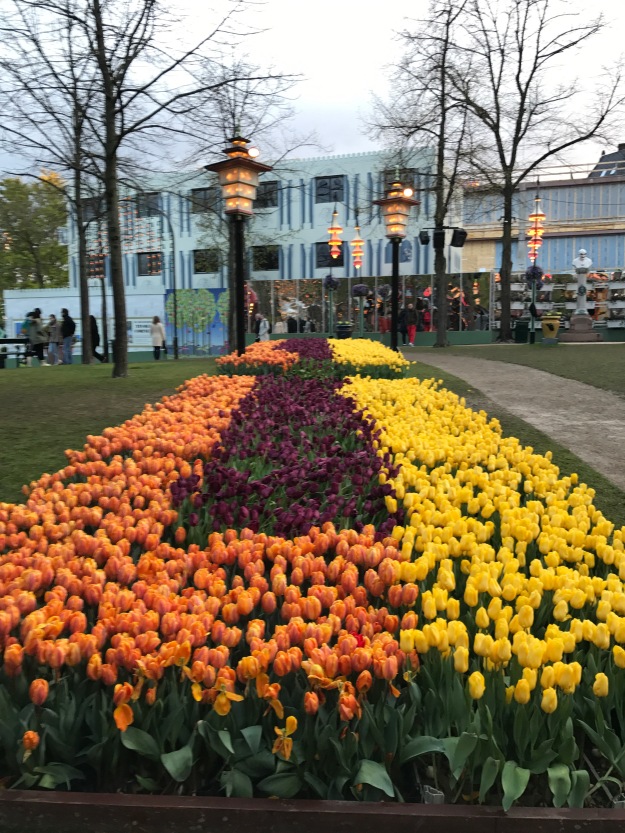 So were the thousands of tulips. In fact, the flowerbeds were so perfect that I wondered if gardeners came in nightly and replaced them with fresh plants straight from a greenhouse.

A rock band was getting ready to set up at the Chinese theater. The theater dates from 1874.

Families strolled and let cotton candy melt in their mouths. 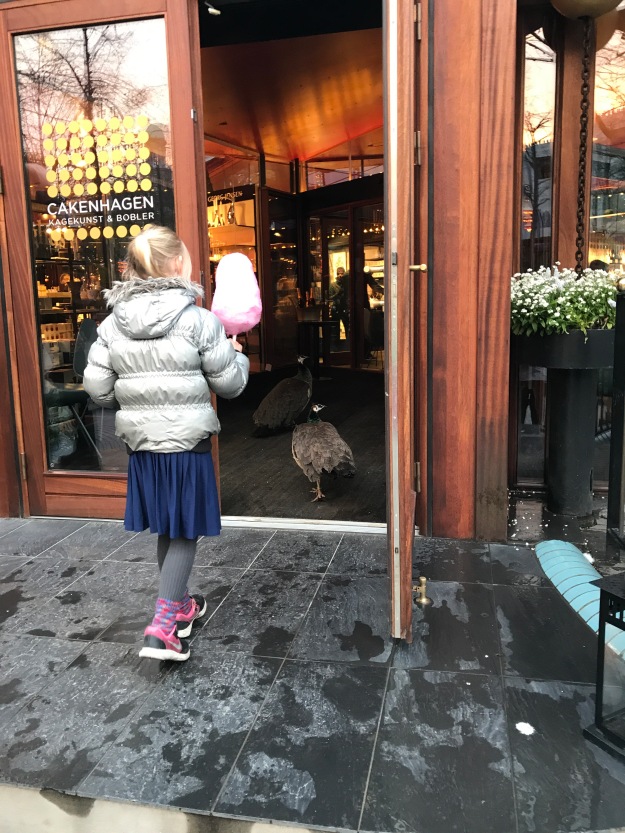 A pair of peacocks wandered into a restaurant.

There are any number of restaurants, plain to fancy, plus food carts strategically placed.

Tivoli has many faces.

Raincoats for sale? Sure. It rains quite a bit in Copenhagen.

Hans Christian Andersen, 1805-1875, is pretty much the secular patron saint of Denmark. He loved Tivoli Gardens. In 1965, the city put up a bronze more-than-double life size statue of the writer of at least 125 fairy tales, just outside City Hall. He’s holding his place in a book while he gazes up at the bright lights of Tivoli across the street. His knee is brightly polished because everybody sits on his lap for a photo. The sculptor was Henry Lucknow-Nielsen.

Across town, the wistful sculpture of Andersen’s Little Mermaid draws rowdy crowds from the nearby cruise port. It may be all some people really see of Copenhagen.

Minus the crowds, the mermaid is lovely. She seems to ignore the busy harbor behind her. I’m sure she dreads the rowdy cruise-boat crowds, but maybe she’s off in her own world. Edvard Eriksen created her in 1913. 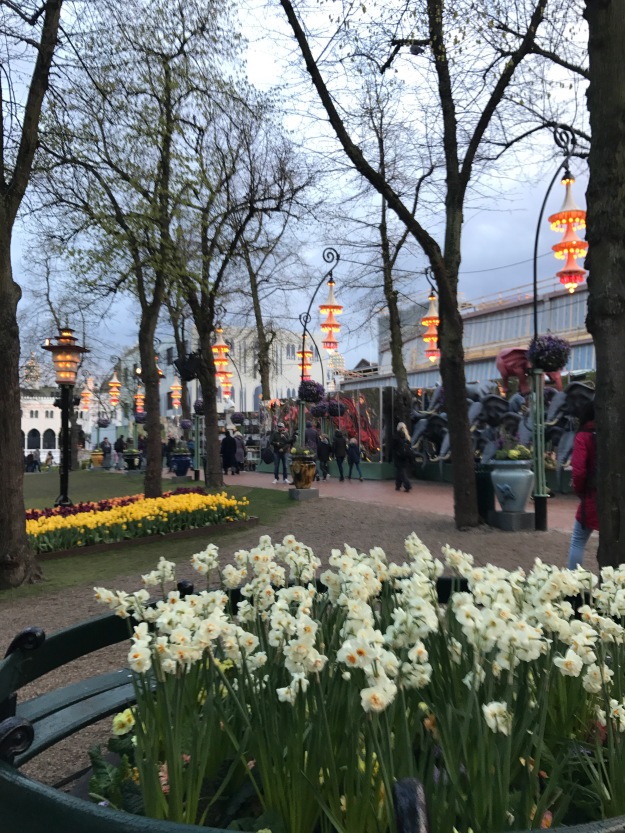 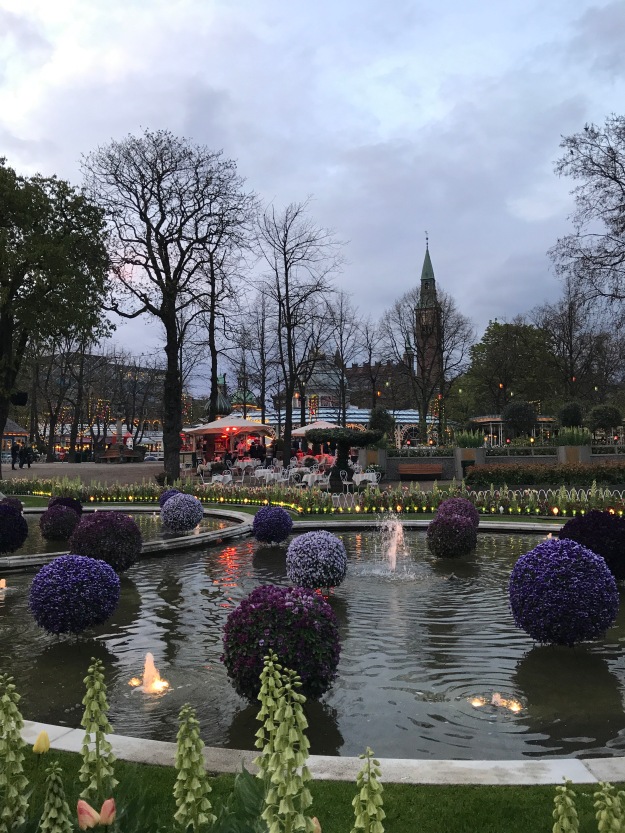 Tivoli in springtime did not disappoint. I loved Copenhagen so much that I’m going back in December (cheap off-season airfares helped).

Will it be cold? Afraid so. It was cold enough for mittens and wool hats in early May. But I expect Chrismastime in Scandinavia to be a fairy-tale experience. Plus there may be snow!

Join me next time for more explorations in the art, literature and history of Europe!