On this Veterans’ Day in the United States, I stopped by a local museum to see an exhibit honoring a special group of soldiers who served during World War II.  The Tread of Pioneers Museum in Steamboat Springs, Colorado is hosting a exhibit called “Soldiers on Skis.” A number of locals served as soldiers on skis.  They still hold reunions here.

Immediately after the attack on Pearl Harbor on December 7, 1941, military leaders realized that American soldiers would have to be combat-ready in all kinds of circumstances all over the world.  That included the treacherous mountain terrain of Europe and Asia–and, if it came to it, of the United States as well.  In 1939, Russian troops invading Finland had been held back by much smaller numbers of Finnish soldiers on skis.  The Finnish soldiers were able to use the rugged terrain of their home country to their advantage. United States military leaders took a lesson from the brave Finns. Soon Army suppliers were designing warm clothing and tents for mountaineering soldiers.

Serious planning for mountain combat began. There were already a number of recreational ski mountains in the United States, along with some ski racers and ski patrol men. The Army began recruiting efforts with men already skilled on skis and in mountain terrain. They found no shortage of volunteers. The 10th Light Division (Alpine) was activated in July of 1943 and based in Camp Hale, in the heart of the Colorado Rockies. Among other training techniques, Army engineers actually built a glacier to mimic terrain the soldiers would soon see in Italy.  In 1944, what became known as the 10th Mountain Division shipped off to Italy.  They fought Axis troops in fierce and crucial battles in the Italian Apennine mountains near Bologna, Pisa and Lake Garda. (There’s an expert ski run called “Riva Ridge” in Vail, Colorado. I skied it for years without appreciating that it was named after a perilous ridge climbed by 10th Mountain Division soldiers on February 18, 1944, on their way to a vital attack that began on February 20).

Once the skiing soldiers had successfully helped to end German resistance Italy, they were to be shipped to Japan to fight in the mountains there.  However, they were not needed after the Japanese surrender. Since World War II, the 10th Mountain Division has been demobilized and reactivated several times.  To this day, the unit is light infantry, with special training and equipment to move in hard terrain. 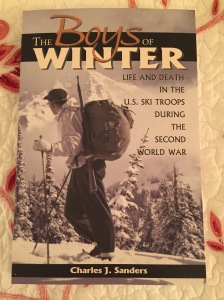 I bought a book at the museum. It is The Boys of Winter: Life and Death in U.S. Ski Troops During the Second World War. The author, Charles J. Sanders, particularly honors three of the many men who gave their lives fighting in the 10th Mountain Division.  Their names are Rudy Konieszny, Jacob Nunnemacher, and Ralph Bromaghin.  I’m going to read their stories with interest.

Many of the great American ski areas were founded by skiing soldiers who returned home, sad at the loss of their friends but enthusiastic about sharing their love of the mountains and of skiing with a civilian population living in peace. Pete Seibert, an ex-soldier who became one of the founders of Vail Resort, no doubt had his fallen friends in mind whenever he set off down Riva Ridge.