“Blood Swept Lands and Seas of Red” is the title of an art installation taking place at the Tower of London from August to November of this year, the 100th anniversary of the outbreak of the First World War.  The title comes from a poem written by an unknown soldier. People are invited to buy a ceramic poppy for the installation, up to a total of 888,246 poppies, one for every death in the British forces. The photo above is from The Guardian at http://www.theguardian.com/world/2014/sep/01/tower-of-londons-ww1-remembrance-installation-share-your-photos-and-videos. The designer of the installation is Tom Piper.  Poppies are made by ceramic artist Paul Cummins. 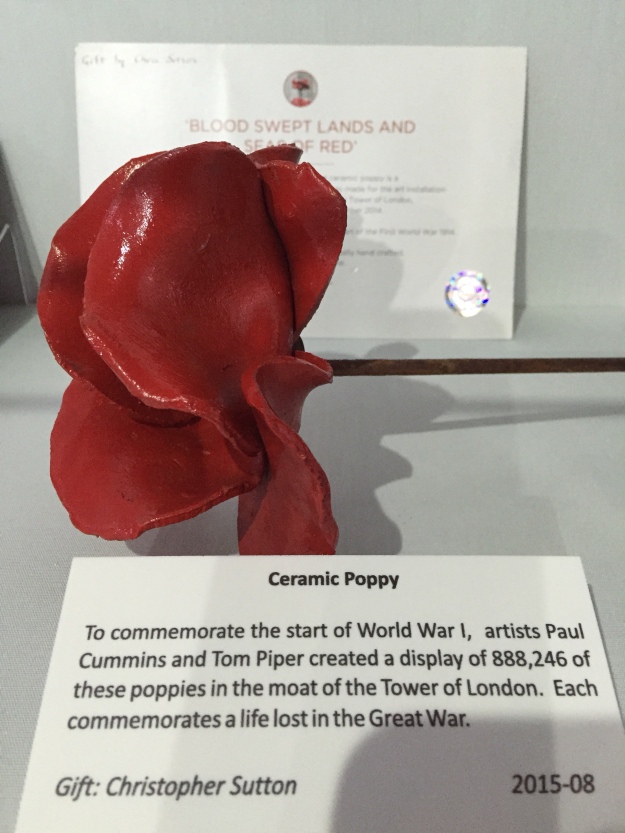 The poppy above was photographed in the small military museum on the estate of Hever Castle, southwest of London. 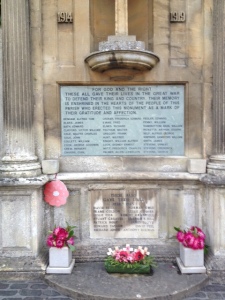 The memories of World War I extend all over England this year, into the smallest villages in the country. Most towns have a memorial built to remember the local soldiers fallen in the
“Great War.”  Sadly, within a few short decades new names had to be added from each town, with the outbreak of the Second World War.

Soldiers who fell in battle were buried in identically marked graves, regardless of their social or military rank.

Many grieving families put up special memorials to their loved ones close to home. This plaque, in Salisbury Cathedral, poignantly remembers a nineteen-year-old soldier, Edward Wyndham Tennant. the son of a lord. He must have entered the war as an officer. He died in the Battle of the Somme in 1916. On the plaque above his marble relief portrait, a fellow soldier describes the young man’s leadership:  “When things were at their worst he would go up and down in the trenches cheering the men; when danger was greatest his smile was loveliest.”

Those who could not fight helped the war effort in other ways, in both great wars.  All of the great British country houses I’ve visited on this trip have displays recalling their days as hospitals or military bases. Operating rooms were established in kitchens, and convalescent wards occupied Great Halls. Young aristocratic women rolled up their sleeves and cheerfully served as nurses.

This is a year for Britons to recognize the sacrifices of those who served their country in the Great Wars.