Emily Bronte was born on July 30, 1818. Her brother Branwell, an aspiring poet and portrait painter, composed one of the very few images of her. His sister Emily was painfully shy, hardly speaking with anyone outside the family. But she was a bold artist.  Her novel, Wuthering Heights, is still startling in its passion and social critique.

Branwell  was the only son in the family and great things were expected of him. I think poor Branwell suffered from what we might now call Preacher’s Kid Syndrome: a need to act out, just because his father, the Reverend Patrick Bronte, was such an upright man. Branwell studied painting, in between bouts of drinking, taking opiates, and getting fired from various gigs as a tutor–for which his father had taken great pains to educate him. In around 1834, at age 17, Branwell painted the group portrait above. It is now one of the most treasured works in London’s National Portrait Gallery, and the centerpiece of a special Bronte exhibit I saw last spring.

Why is this rare painting folded in the middle?  We’re lucky that it still exists, damaged as it is. The portrait, together with the profile of Emily, traveled to Ireland with Charlotte Bronte’s widower after her death as a young bride. It appears that a heartbroken Arthur Bell Nicholls shoved the portraits of his beloved Charlotte and her sisters on top of a wardrobe in an Irish farmhouse, out of sight and out of mind.

The churchyard where all the Brontes are buried (except Anne, who died at Scarborough and was buried there) is just outside the door of the parsonage. Living there, walking every day past the graves of so many loved ones who had died so young, must have been unbearably sad.

By the time Charlotte died, shortly after her marriage and while pregnant with her first child, Branwell, Emily and Anne were already dead. Most likely they died of either tuberculosis or infectious diseases from the poor sanitation in the village. (Branwell more or less drank himself to death). Nicholls stayed in Haworth for several years to care for his father-in-law. Nicholls eventually remarried. His widow finally discovered the paintings (housecleaning, no doubt) in 1914.

Sadly, it seems that Branwell had erased himself from the family portrait. This fact was not known until the 1950s, when the oil paint became more transparent with age. Now, it is clear that there was once a man’s figure between the sisters.  Did Branwell already have such a low opinion of himself? Was he ashamed to be seen with his much-more-virtuous sisters? Or did he feel he could not do justice to his own wonderfulness? Or was this possibly a portrait of his father, who took a very dim view of Branwell’s nights spent in the local pub or worse?  We’ll never know. 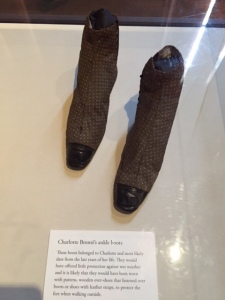 The London exhibit also contains items such as Charlotte’s tiny boots. The caption says that for outdoor wear, the boots were most likely worn with wooden platens strapped to the soles for a little protection against mud and snow. How did the Bronte girls manage to walk for miles in the rugged North Yorkshire moors in footgear like this?

Last year I made a literary pilgrimage to Haworth in Yorkshire.  The town still looks much the same as it did when Emily composed her novel about wild forbidden love on the moors. I was lucky enough to stay at Ponden Hall, a house where the Brontes were regular visitors. It’s now a family home, a lovingly run bed and breakfast, and a venue for  gatherings of artists, writers, and Bronte fans. The charming hosts go out of their way to show all visitors around their historic home.  In the photo below, the bookcase is a hidden door into a secret library. The Bronte girls used to visit the house, a couple of miles from the parsonage, to use the library.

It’s possible to actually sleep in the “box bed,” shown above, with the little window that reportedly inspired Emily to write her famous scene where the ghost of Cathy appears outside the window, begging to be let in.  Her forbidden and guilt-ridden lover Heathcliffe staggers out onto the moors in desperate search of her. (Did I sleep in the box bed? No, but maybe next time! Do I believe in ghosts? Maybe!)

In 1939, Laurence Olivier and Merle Oberon played the lovers Cathy and Heathcliffe in the classic romantic film based on the novel.  Since then, there’s been a 2011 film version that makes explicit the racism that Emily only hinted at in her novel, by calling Heathcliffe a “gypsy.” It’s on my list to watch.  There’s a 2009 miniseries, too. 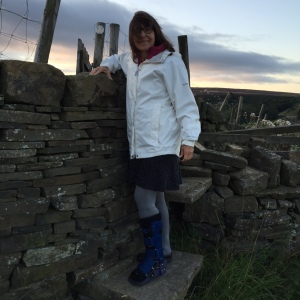 Did I venture onto the wild moors myself?  Only partway.  I had a broken foot, thanks to a super-klutzy fall just before I left on my trip.

But I’m determined to hike the moors.  Next time, I hope I’ll be able to follow the signposts and get just a little bit lost in the wild countryside that inspired Emily Bronte and her sisters.

Join me next time for more explorations in the art, history and literature of Europe and the British Isles!