In around 1656-57, the great Spanish court painter Diego Velazquez was at the height of his powers, both as an artist and as a courtier.  King Philip IV appointed him not only to paint portraits of the royal family, but also to acquire and curate the royal art collection. Velazquez was more than a mere painter; he lived almost as a member of the royal family. Many people think Las Meninas is the greatest painting in all of Western art.

In 1957, Pablo Picasso painted over 40 of his own versions of the painting. One of the greatest artists of modern times was carefully studying and paying tribute to a great artist of the past.

In the original painting, Velazquez did not have the red cross of the Order of Santiago emblazoned on his chest; he only received it three years later.  Philip IV ordered the cross to be added to the painting after the death of Velazquez. Legend has it that the King personally painted it.

The central figure is Princess Margarita Teresa, at the time the only living child of her parents, King Philip IV and his second wife Mariana of Austria. They’re in the background of the painting, possibly reflected in a strategically placed mirror. Also present are two ladies-in-waiting, two dwarves, a lady chaperone, a chamberlain, a bodyguard, and a friendly-looking mastiff.  And the artist himself is present, with brush and palette. The names of all the people are known, except the bodyguard.

I’ll leave it to art historians to explicate what all Velazquez wanted to say in his magnum opus.  I’m drawn to the enchanting figure of little Margarita Teresa, age 5.  This was a golden moment in her short but seemingly happy life. The painting was almost destroyed by a fire in 1734.  Fortunately, it was rescued.  The left cheek of the princess was burned, but it was painstakingly restored.

The spectacular Velazquez exhibit at the Vienna Kunsthistorisches Museum last year had to make do with a reproduction of Las Meninas. The masterpiece is too precious for the Prado to lend out.

One of the pleasures of a major museum exhibit is a stop at the gift shop.  What souvenirs did the marketing people come up with? I thought they outdid themselves for the Velazquez exhibit.

Anyone for a t-shirt with the most fetching images from the great paintings? On the black cotton background, they show up almost as elegantly as the figures in Las Meninas.

Or how about a set of salt and pepper shakers? The salt is the adorable Margarita Teresa.  The pepper is Diego Velazquez himself, complete with brush, palette and the cross of the Order of Santiago. I’m still kicking myself for not buying them.

An article about Picasso’s Las Meninas is at http://web.guggenheim.org/exhibitions/picasso/artworks/maids_of_honor

Today in Paris, the Musee Picasso reopens after five years of turmoil and $60 million in renovation.  It’s the anniversary of the great artist’s birth in 1881. (He would be 133 today!) Francois Hollande, the French President, will attend.  Throngs of art lovers will follow.  I’ll be among them as soon as I can swing a trip to Paris. When I was last in Paris, last spring, I just missed the planned May opening; it was one of many, many dates that came and went with no opening after all. 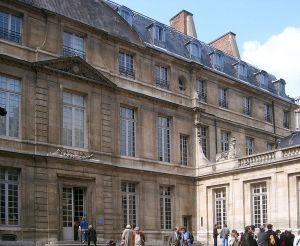 The project was overseen by a distinguished but idiosyncratic Picasso scholar, Anne Baldassari. Five years ago, she was given the responsibility of remodeling the 17th-century mansion in the Marais district of Paris. Her uncompromising vision for the renovation turned a planned two-year project into five long years. The old museum never seemed crowded to me.  Not that many tourists made their way to its imposing gates.  The museum always felt a little damp; after all the “Maris district was once a swamp. It was always a labyrinth of rooms clearly carved out of a very old space never meant for exhibiting art.  But it was always one of my favorite museums. The space seemed appropriate; Picasso spent his entire career working in ancient spaces, both grand and humble.  He spent the years of World War II working tirelessly in studios in Paris, even though he was forbidden to exhibit his work by the occupying Nazis.

Anne Baldassari was dismissed about a year ago, after acrimonious struggles with workers, other administrators, and Picasso heirs.  But her scholarship is still respected; she was invited back to curate part of the hanging of the largest collection of Picasso paintings in the world. The museum houses about 5,000 works. In the old space, only a small fraction could be exhibited at a time. Picasso’s family donated most of these works to the French state after his death, in payment of death taxes.

One of my most unforgettable sights in a museum was not a work of great art; it was a young child crouched on the floor of the Musee Picasso in Paris. As her mother waited nearby, the little girl moved from one Picasso painting to another, intently drawing in a notebook. She was oblivious to anything around her, and people respectfully stood back to let her work.  What she was doing WAS work, not play. Was she a budding genius, or just a kid going through a stage, as kids will? Hard to tell, but I admired her mother for patiently spending the day letting this child pursue her passion.

I think Pablo Picasso would approve.  I hope he enjoys his birthday in his renovated museum!

In the rarefied world of Christie auctions, price is always what makes news.  At a recent auction, sales were disappointing except for the price fetched for a Picasso painting from 1950, “Claude and Paloma.”  It sold for $28.1 million, much more than predicted.  I can see why.  I’d have bought it myself. To paraphrase Ferris Bueller’s thoughts about buying a Ferrari, “If you have the means, I recommend it.” 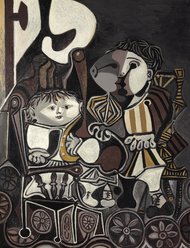 Photo from NYT article cited below

The painting depicts Pablo Picasso’s two youngest children.  What strikes me is the depiction of the baby, Claude.  In the midst of all kinds of sophisticated design elements, in a sort of cubist composition, the baby’s face stands out as almost a traditional portrait.  Could it be that the great man just melted when looking at the little child’s face?  This portrait seems a pure depiction of childhood innocence.  Maybe the artist was looking back at his own lost innocence,   when he first discovered his own talent and had no idea where it would lead him.  In 1950, Picasso had just lived through the horrors of the Second World War, which he spent in occupied Paris.  The Nazis did not allow him to exhibit, considering him degenerate.  The end of the war was a new beginning of artistic freedom.  A baby is always a new beginning, too.

The article about the Christie auction, by Carol Vogel, is at http://www.nytimes.com/2013/11/05/arts/despite-picassos-bidding-is-sluggish-at-christies.html?_r=0

At the very end of two days of looking at great art in Amsterdam, I came across a Pablo Picasso painting that made me laugh: “Seated Woman Wearing a Hat in the Shape of a Fish.”  The painting is in Amsterdam’s modern art museum, the Stedelijk. The date is 1942, midway through the Second World War.  I had to look up the artist’s whereabouts during this time.  As it happened, he stayed in Paris during the entire Nazi occupation.  Naturally, the Gestapo regarded him as subversive–and he certainly was, though not in any way the Nazis could understand. He did not bother to exhibit his work at this time, but he never stopped creating.

According to one account, one day Gestapo officers were in his studio harassing him, as they often did.  They spotted his great antiwar painting, “Guernica,”  which depicts the terrible suffering inflicted by German bombers on a town full of innocent victims during the Spanish Civil War.  A Gestapo officer pointed at the painting, which was not yet acknowledged as one of the most powerful antiwar images ever made, and asked Picasso, “Did you do this?”  “No,” Picasso reportedly replied. “You did.”

So what about this woman with a fish on her head? Could it be a spoof on military headgear?  Or a joke about pompous officials in general? Was Picasso poking fun at some acquaintance?  Was he making fun of women’s frivolous fashions during wartime?  I don’t know. Maybe the painting  means nothing at all–maybe that is the point. Maybe it is just meant to provoke a smile. In even the darkest times, we need artists who are able to show us that there is more to life than the grim reality that sometimes surrounds us.