One of the best things about travel is making connections between things that seem unrelated.  For instance, last night I saw the play “Nice Fish” at the Guthrie Theater in Minneapolis and found myself thinking about Ludwig II of Bavaria. I’ll explain!

First, about the play: the wonderful actor Mark Rylance introduced large television audiences to the work of Duluth poet Louis Jenkins (who has been featured reading his prose poems on Garrison Keillor’s Prairie Home Companion, among other places). In 2008, while accepting his Tony award, Mr. Rylance did a hilarious deadpan recitation of a poem about the wearing of uniforms. You can watch the speech at http://www.youtube.com/watch?v=TU9iCgGDjRI.

Louis Jenkins emailed him, and soon the two men were collaborating on what eventually became the play “Nice Fish.” 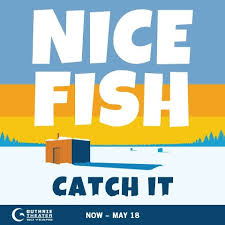 In the play, two men share an afternoon on a frozen Minnesota lake–a time-honored pastime in these parts.  The actors are Mark Rylance himself, on the right, and Jim Lichtscheidl on the left. Besides co-writing the play, Mr. Rylance also directed, along with his wife, Claire Van Kampen.

In the course of a long freezing afternoon, they encounter an insanely officious game warden. Then things turn surreal with the appearance of three figures from Germanic myth–sort of.   There’s an alluring young girl who pops out of a fishhouse in a bikini. She later changes into a festive prom-like party dress and teaches the lovestruck Ron to waltz.

Mark Rylance’s character can hardly believe his good fortune when she seems to fall in love with him, but she confides that Wayne, the owner of the fishhouse, is her sort-of boyfriend who’s gone off to fetch supplies.  When Wayne returns, roaring onto the ice on a vintage snowmobile, he summons his brother, Wainwright, who acts as his wingman.  Complications ensue.

Mr. Rylance writes in the play’s program that he got the idea of introducing these characters while watching the opera Das Rheingold, by Richard Wagner.  Probably none of us would be watching Wagner operas if Ludwig II of Bavaria had not decided to be Richard Wagner’s patron.  I’ve written about Ludwig’s awe-inspiring grotto at Linderhof Castle, constructed as his personal theater for private performances of Wagner’s operas. 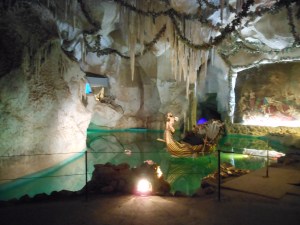 Having arrived just before curtain time, I watched the entire play without reading the program notes.  So I didn’t know that Flo was a stand-in for Freya, the Norse goddess of eternal youth.  I didn’t know that Wayne and Wainwright were stand-ins for the giants who kidnapped Freya. (The plot of Das Rheingold, involving a magical ring, also provided some of the inspiration for J. R. R.  Tolkien’s The Hobbit and The Lord of the Rings). I doubt most of the audience around me cared much about the underlying myths, either.  The show was laugh-out-loud funny and thought-provoking to those of us who thought we were just watching Midwest eccentrics on a frozen lake.  (Yes, the supposedly staid Midwest has plenty of eccentrics–we all have relatives, don’t we?)

The play ends with a hilarious yet touching enactment of aging, death and the afterlife. It has had mixed reviews, including complaints that it is too long.  Personally, I would cheerfully watch Mark Rylance read blizzard school closings for the entire state of Minnesota.  Seeing what he can do as playwright and director is well worth my time any day.  I just might go see the show again before it closes!

Join me next time for more explorations into the art and history of Europe–with connections to modern life.