The Gothic Chapel of Saint-Hubert was built between 1491 and 1496 during the reign of Charles VIII.

It’s perched right at the edge of the wall surrounding Chateau d’Amboise, towering over the town far below. 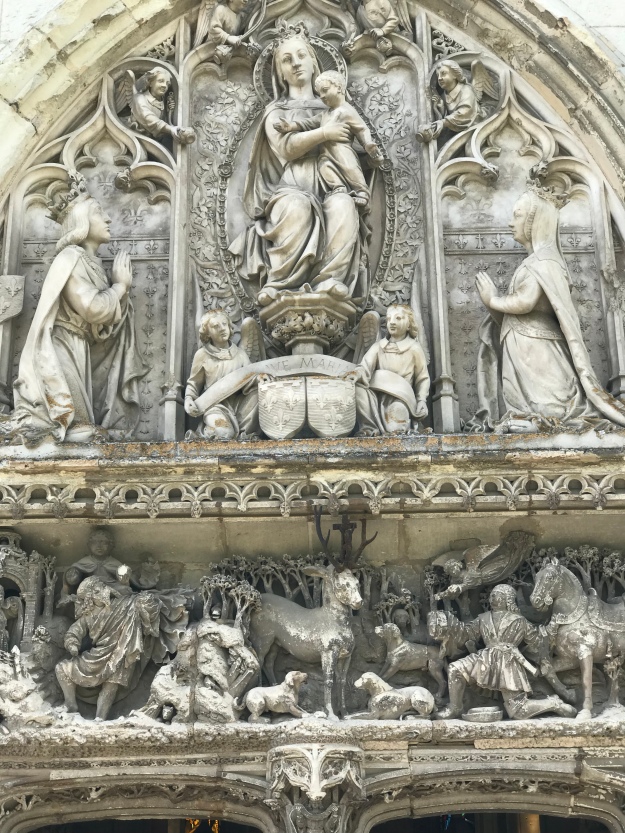 The chapel is tiny but exquisite. The facade tells the story of St. Hubert. He seems to have been an actual person, born around 656 to 658 in Toulouse. By the time he died on May 30, 727, he had become the first Bishop of Liege.

Hubert was a courtier living the good life of feasting, wearing fine clothes, and hunting in the vast royal forests of various parts of France. But when his wife died in childbirth, it seems he had a sort of midlife crisis. He chucked his royal duties and turned his back on religion. Instead he spent all his time hunting, all by himself.

On Good Friday, while everybody else was in church, he was out hunting alone as usual when he had a miraculous vision. A magnificent stag appeared with a crucifix in its antlers. A voice told him to mend his ways and get back to religious life, which he did. He became known as the “Apostle of the Ardennes,” devoted himself to all manner of good works, and died peacefully in old age.

Hubert became the patron saint of hunters (of course). He was much venerated in the Middle Ages for being able to cure rabies. The cure involved using St. Hubert’s Key, a fearsome metal nail-like brand that was heated red-hot and applied to the spot where an unfortunate person was bitten by a rabid animal. I suppose it worked at times, but I’m betting Leonardo da Vinci could have improved on the method if he’d set his mind to it.

St. Hubert has his very own club today in the UK. It’s dedicated to deer and wild boar management.

St. Hubert’s story is very similar to that of St. Eustace, but it does seem they were different people who had the same vision. I first encountered the crucifix-in-antlers story on a visit to Canterbury Cathedral in England, and wrote about it. Eustace did not fare as well as Hubert, though. Legend has it that Eustace, his wife and children were eventually roasted alive by the Emperor Hadrian. 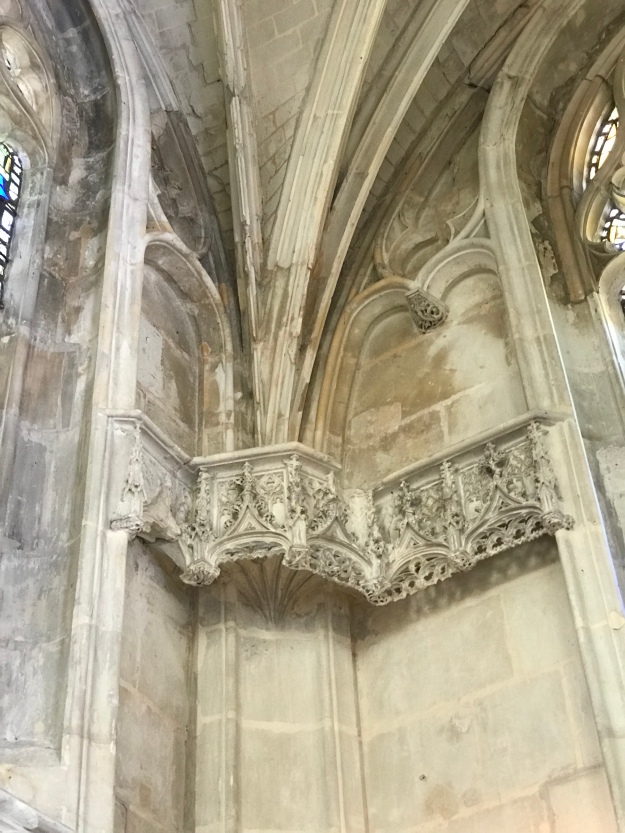 St. Hubert’s chapel is lovely and peaceful inside even when there are a lot of tourists visiting Amboise. People duck in to see Leonardo’s tomb, but they don’t linger.

The chapel is a nice resting place for Leonardo, who died just up the street in his last house, Clos Luce, in 1519. And I’m sure he appreciates the visitors from all over the world. 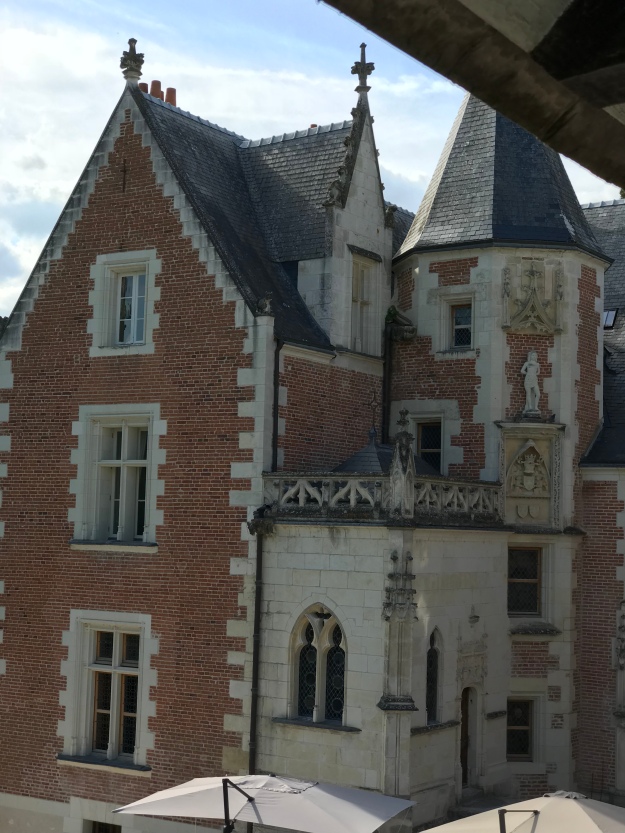 In 1516, King Francois I imported his very own personal resident genius from Italy to his home in Amboise. He installed Leonardo da Vinci in a fine mansion just down the road, Clos Luce. It was close enough to the royal chateau to be connected by a short tunnel.

Leonardo was nearing the end of his life, but he still had plenty of ideas and plenty of energy. He lived and worked for three years at Clos Luce.

It’s easy to think of the equally energetic Francois I escaping his royal duties for nice chats in Leonardo’s man-cave. 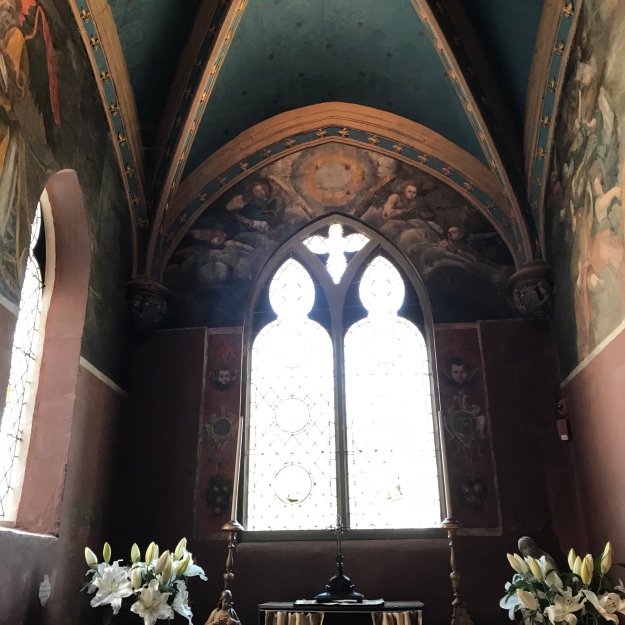 Francois’s long-suffering wife, Queen Claude, often visited Clos Luce to pray in the tiny chapel. Francois was reportedly kind to her, but he was away much of the time, building and fighting and spending time with his mistresses. Claude married at age 15 and dutifully went through constant pregnancies until she died at age 24.

I’d like to think that Leonardo was a friend to Claude as well as Francois.

Today, visitors see the rooms where Leonardo lived and died. 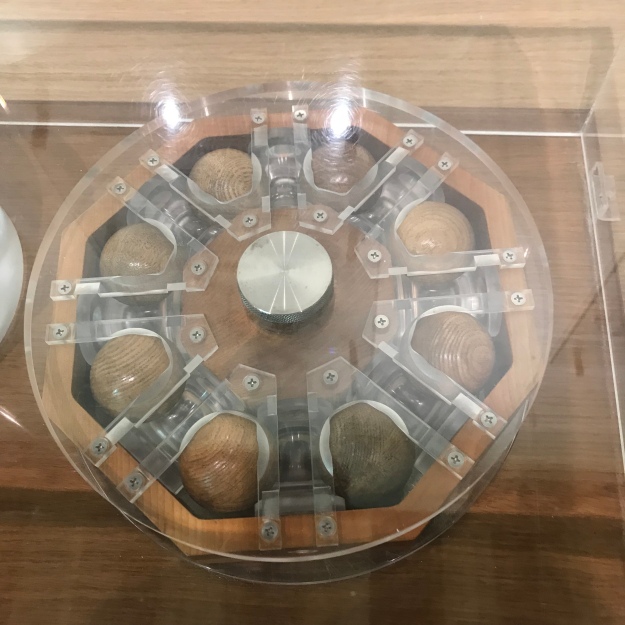 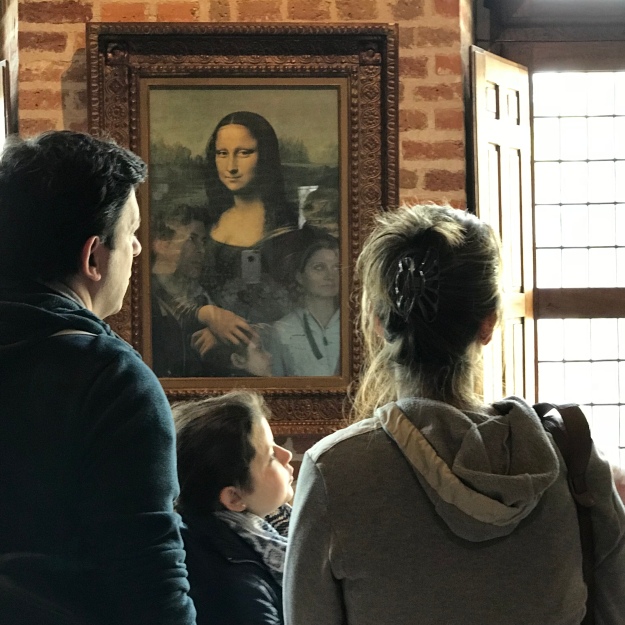 He brought a few of his favorite paintings to Amboise, including the Mona Lisa. 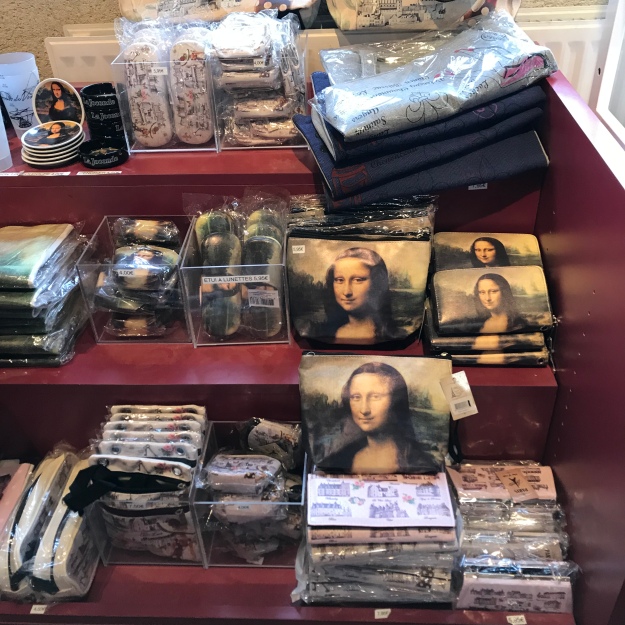 The gift shop is well stocked with the famous lady’s visage.

Although the house and grounds are usually full of tourists and school groups, it’s not too hard to imagine that Leonardo just popped over to the chateau to see his good buddy Francois. Leonardo and Francois: a fine bromance.

On to lunch, with dessert, of course. 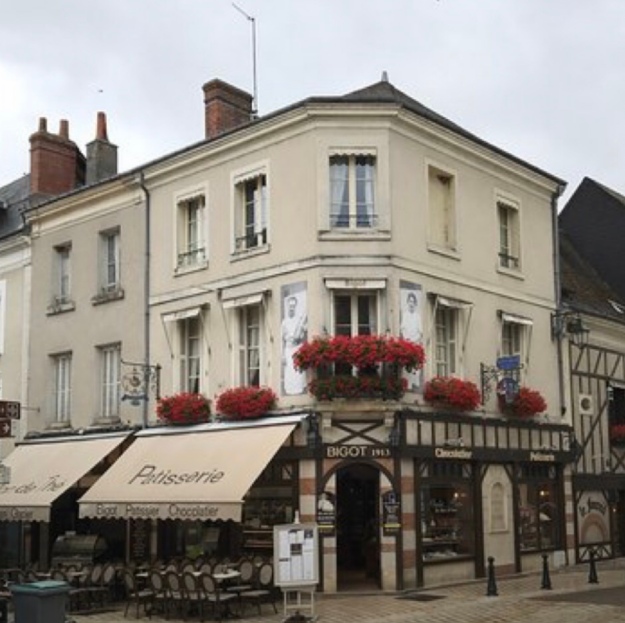 In honor of my visit to Leonardo’s home, here’s a first for me: a video. I can’t resist. My favorite place in Amboise, Patisserie Bigot, has a unique toilet.

The seat is perfectly round. Every time it flushes, the seat does a complete self-cleaning rotation.

If I were traveling with little kids, I would never get them away from this fascinating toilet. Maybe Leonardo invented it!

King Francois I was twenty-five years old when he inherited the French throne in 1515. He was more than ready, having sat in on royal councils for several years beforehand. After a military victory in which he claimed the Duchy of Milan, there was a brief period of peace between 1517 and 1520.

What was a young king to do? Tour France with his mother, of course. He and his mom, Louise de Savoie, were enjoying their tour when Francois received word that his wife, Queen Claude, had given birth to their first son in Amboise. Susan Abernethy has a very interesting post about Queen Claude’s trying royal life on her blog

Detail from “Field of the Cloth of Gold,” unknown painter circa 1545, my photo taken at Hampton Court Palace

Francois was a contemporary of King Henry VIII of England, who of course was unable to produce a legitimate male heir. The two kings met twice, once at the famous Field of the Cloth of Gold in 1520, and again in 1532 when Francois tried to help Henry VIII get permission from Rome to marry Ann Boleyn.

There was already a lodge on the royal hunting grounds at Chambord. But Francois dreamed of a really grand hunting lodge, and as a wealthy and energetic young king he had the wherewithal to make it happen. 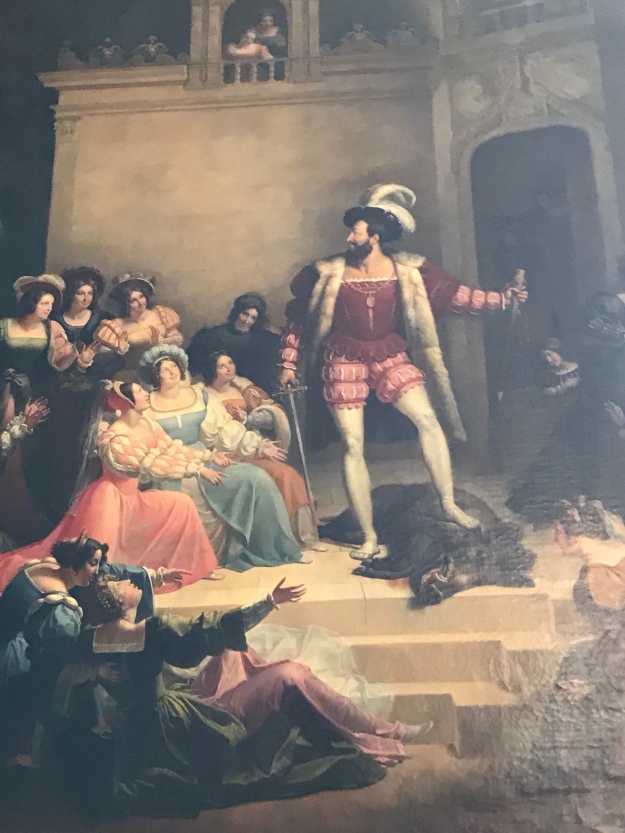 “Francois I Kills a Wild Boar,” Alexandre Menjaud, 1827, my photo of Chambord painting

Early in his reign, Francois amused himself and the court by setting a wild boar loose in the courtyard of Chateau Amboise during a birthday celebration. Naturally the beast furiously tried to escape. The young king dispatched it with “un coup d’epee” (one stroke of his sword.) Everybody applauded. Three centuries later, in 1827, Charles X commissioned a painting to commemorate the feat of his ancestor. (To a modern eye, that feat looks like shooting fish in a barrel, but clearly Francois’s subjects loved it–especially the ladies).

Francois naturally made his mark with changes to existing chateaux like Amboise and Blois, but he wanted to build his own, from the ground up. And he took on a real challenge. The hunting grounds he chose were swampy and far from any road. He had no intention of actually living there–he just wanted to design his own chateau as a place to get away from it all. (He most likely spent only about 70 days at Chambord in all the years he owned the place). He (and subsequent kings) constantly expanded the hunting grounds until the estate was about the size of the inner city of Paris. 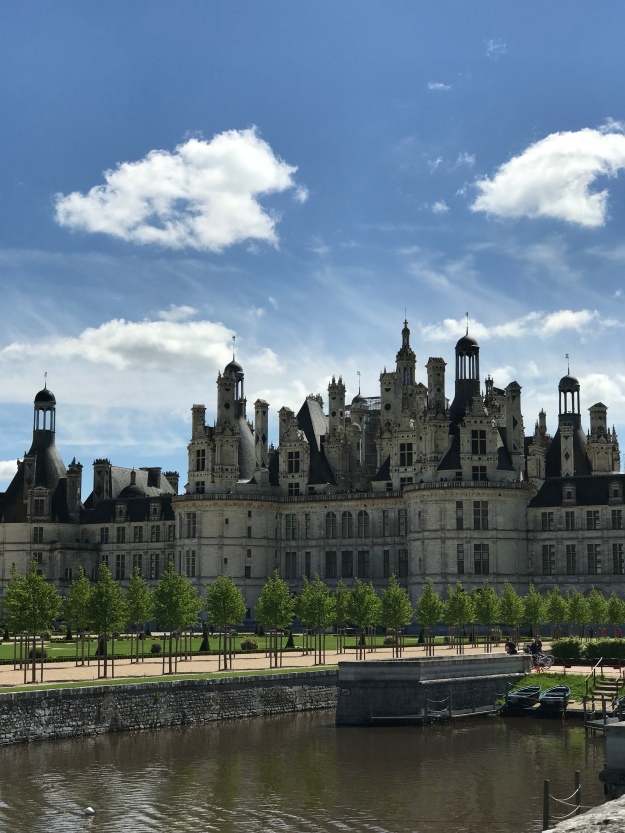 The castle itself ended up with over four hundred rooms and over two hundred fireplaces–way more than Francois I and his “little band” of hunting buddies needed for their getaways. But Francois always intended magnificence. In fact, placards and the guidebook explain that the very building–which Francois had a hand in designing–was intended as a sort of heavenly vision of what monarchy ought to be.

In the overwhelming magnificence of the place, the floor plan is not readily apparent. But the floor plan was important, and was never changed by subsequent kings even as they added their own ideas. The central keep is in the form of a Greek cross, with a spectacular skylit staircase at the center: a sort of new Jerusalem, a vision of what divine kingship should be.

The staircase is the first thing a visitor sees inside the chateau on the ground floor.

It’s a double helix, and legend (plus some documentation) has it that Leonardo da Vinci designed it. Francois did bring the aging genius to Amboise to live out his last years at Clos Luce, a mansion just down the road from one of Francois’s main homes, Chateau d’Amboise.

From the ground floor, a central open shaft rises all the way to the rooftop tower. 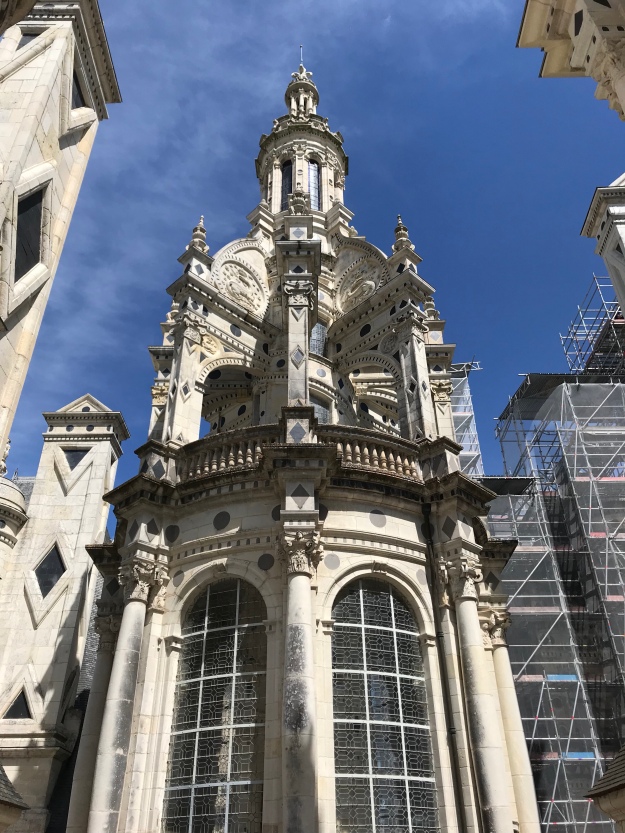 Way up on the rooftop, big windows form a “lantern” that lets daylight flood the space. 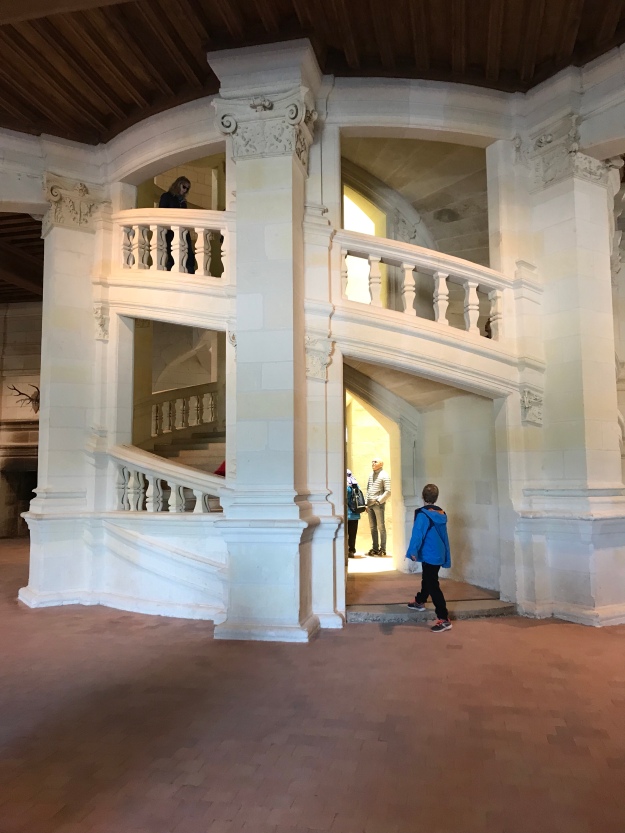 Two courtiers could start at the bottom of the staircase and go all the way to the top without seeing each other. (One can imagine the potential for aristocratic hijinks). 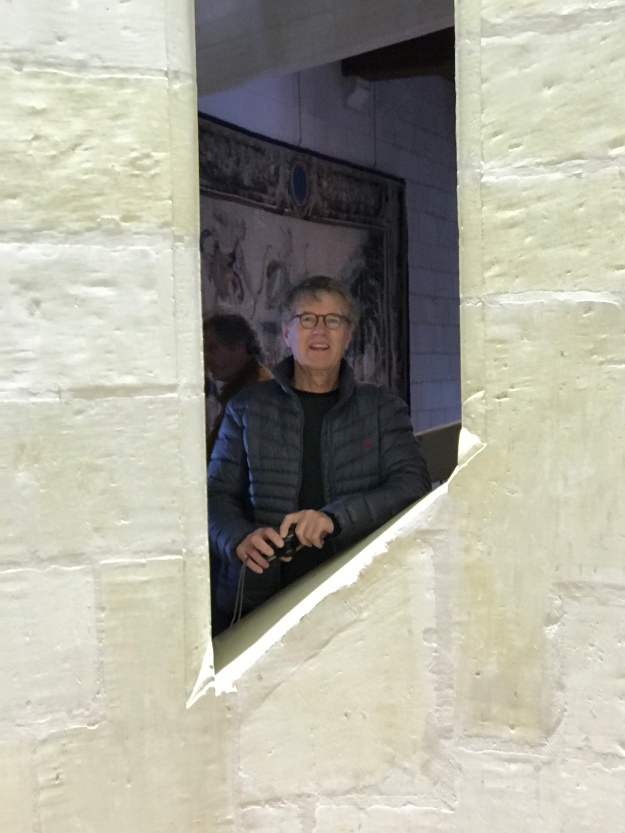 Courtiers could play peekaboo, which no visitor today can resist doing. 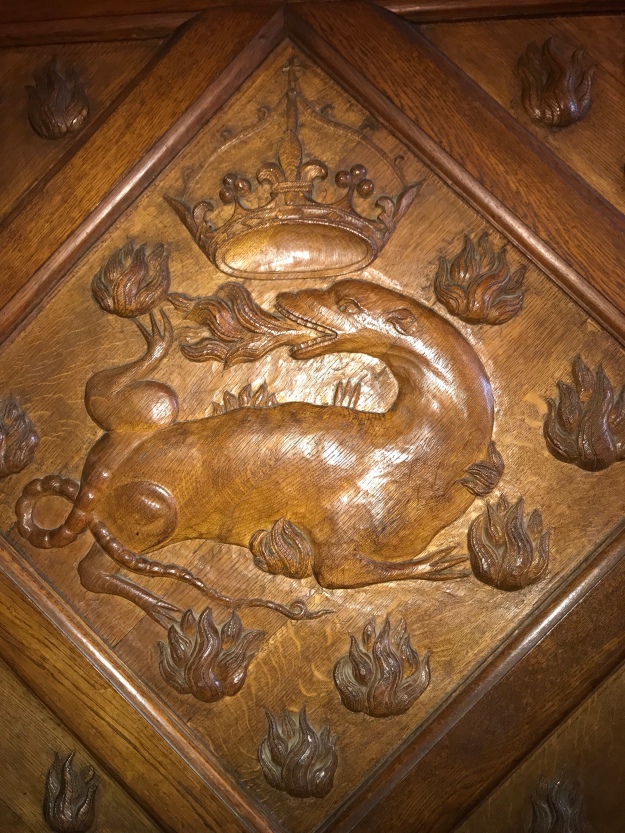 Francois I took the salamander as his personal emblem, and it’s impossible to walk through any of his castles without seeing salamanders everywhere. But wait, that salamander is breathing fire like a dragon!

It doesn’t look like the humble little garden animal I’m familiar with. And the garden animal is not what Francois had in mind. In a delightful blog post, Julianne Douglas explains why Francois chose this little amphibian. Dating back to ancient times, the salamander was believed to be able to live in flames and to put out fires by the coldness of its body.

Francois added the motto “Nutrisco et extinguo,” a Harry Potter-esque way of saying “I nourish and I extinguish.” Fire destroys, but it also lights and warms. So Francois, Renaissance man that he was, aimed to be the king who could conquer fire itself: thriving on the good things and stamping out the bad.

Guess what Francois’s favorite letter was? “F,” of course.

Chambord has endless ceilings with Francois’s favorite decor. In fact, every building that he occupied was soon plastered with the letter “F” and salamanders on every imaginable surface.

When nobles built their own chateaux during Francois’s time, they added salamanders in his honor. The fireplace above, at the enchanting chateau of Azay-le-Rideau, is an example. 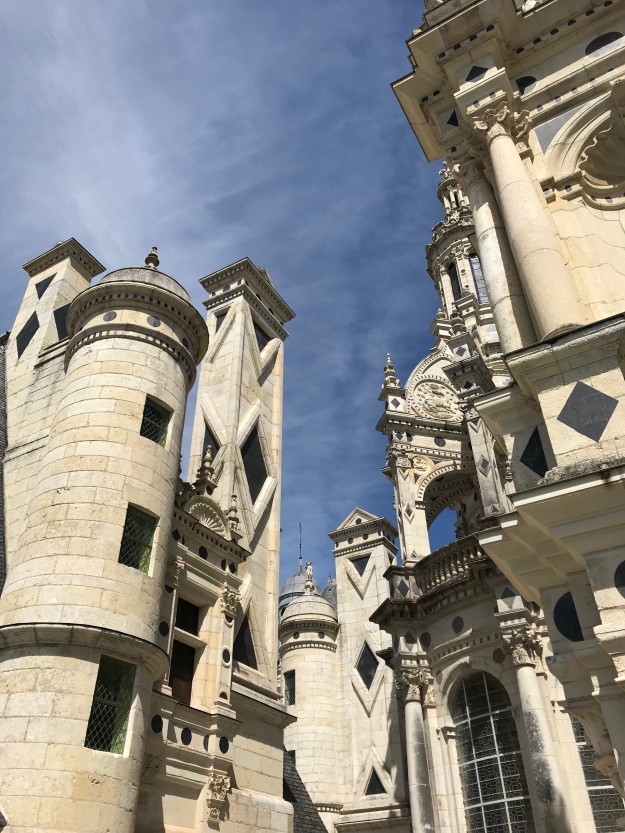 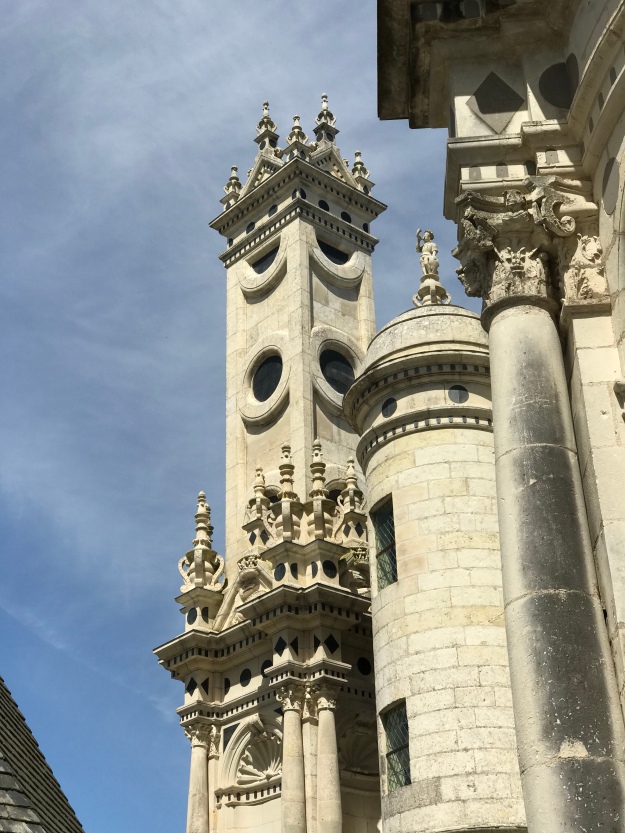 The rooftop of Chambord is like a regal mini- city in itself–a fantastical collection of towers and turrets and whatnot. 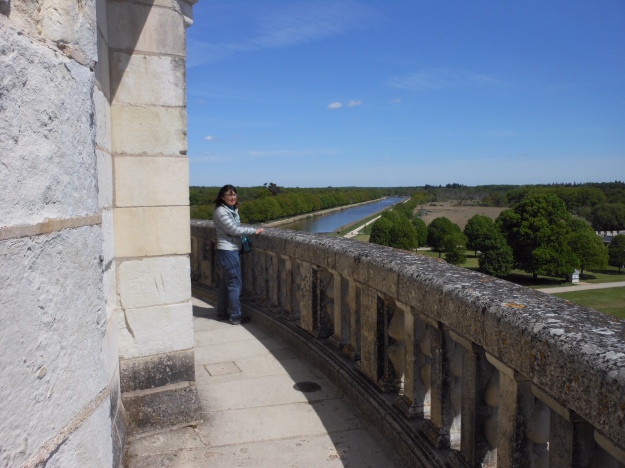 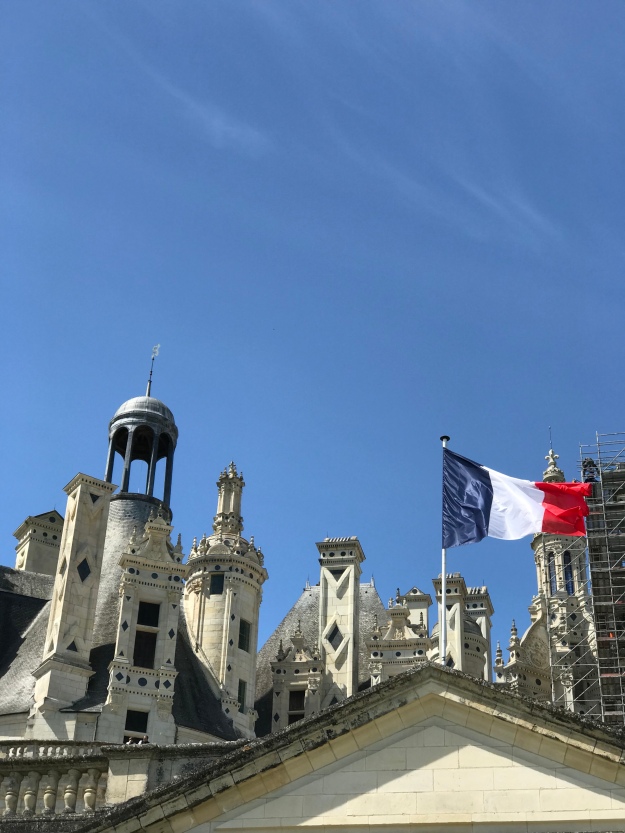 The rooftop must have been Party Central back in the day, a place where courtiers could watch the progress of the hunt while playing hide-and-seek with each other. Then as now, a visitor could get lost in the magnificence. Notice the tiny people peering over the edge of the railing?

Chambord has plenty of luxurious furnished rooms, but somehow it has a much more outdoorsy feel than other chateaux. It feels breezy and open in spring (and no doubt drafty and chilly in winter).

Today, people enjoy themselves in the vast grounds: boats, bikes and golf carts stand at the ready. Sporty King Francois I would probably be pleased. 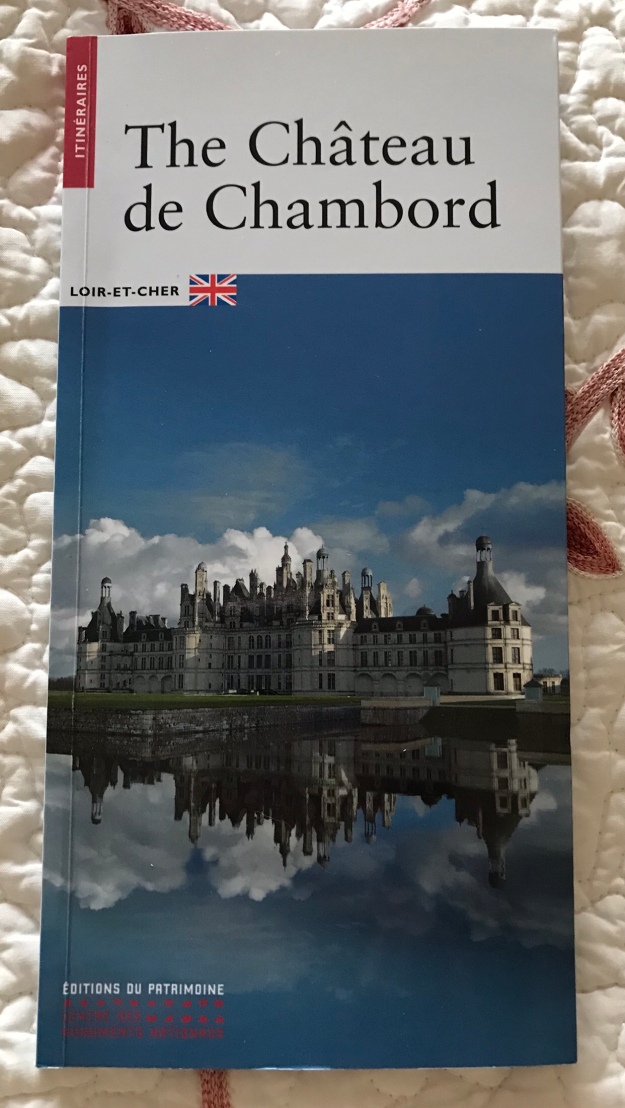 Sources for this article are the guidebook above and various placards in the chateau, many of which are in French. One more reason to improve my language skills! There’s also an excellent video presentation in one of the first chateau rooms, fortunately with decent English subtitles on one screen.