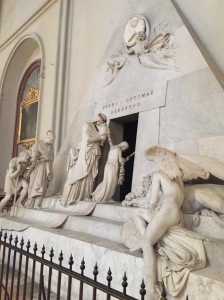 The Augustinian Church, adjoining the Hofburg Palace in Vienna, contains one of the saddest and most grandiose memorials I’ve ever seen.  It occupies a huge section of wall space in the family church of the Habsburgs. It was exquisitely sculpted by the great Italian artist Antonio Canova in 1805 and remains one of his most famous works.  A procession of downcast mourners slowly climbs the stairs toward an open doorway with nothing but darkness inside. Gazing into the void of that black space is truly terrifying. 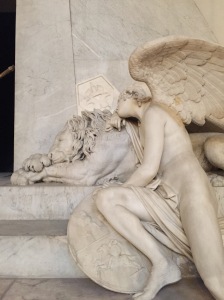 A tearful lion lies beside the doorway, disconsolately resting his mighty chin on his paws.  A handsome male angel leans on the lion’s back, clearly overcome with grief. The whole structure is in gleaming white marble. Canova’s funeral monuments were mostly for Popes and Venetian nobles, plus a small one for the British war hero Horatio Nelson. Most people agree that the monument in the Augustinian Church in Vienna is the grandest and most beautiful of them all.

This masterpiece honors a woman who never did much of anything: Archduchess Maria Christina, favorite daughter of Empress Maria Theresa. After her death at age 56, her husband (flush with wealth lavished on the couple by the Empress) commissioned the monument.

Who is buried in Maria Christina’s tomb?  No one.  She is actually buried in the Imperial Crypt along with the rest of the Habsburgs. But apparently her husband, with the blessing of her mother, wanted everyone who attended church at the Augustinian to be reminded of her loss.

I can’t help thinking of Marie Antoinette, the unfortunate younger sister of Maria Christina. After her beheading, she was unceremoniously thrown into a common pit along with other victims of the Terror in Paris.  Reportedly, when Maria Christina heard of her sister’s gruesome death, she remarked, “She never should have married.” Of course Marie Antoinette had nothing to say about whether or whom or when she married, unlike the more fortunate Maria Christina.

Why did Maria Theresa favor one daughter so highly, out of all her 16 children?  Was Maria Christina possibly the most intelligent?  If Maria Christina had been the daughter sent off the France, might she have been intelligent and strong-willed enough to persuade Louis XVI, a bit of a dim bulb, to accept some reforms before mobs marched on Versailles? Failing that, might she have persuaded Louis XVI to decamp to a safe haven until things cooled down at home? As it was, he ignored many chances to escape.  When he finally decided to make a run for it, the carriage he chose  was a huge lumbering vehicle that stuck out like a sore thumb on the rural roadways of France.  The royal family was captured and hauled back to prison in Paris.

A previous post about the Augustinian Church is at:

Previous posts about Marie Antoinette are at: 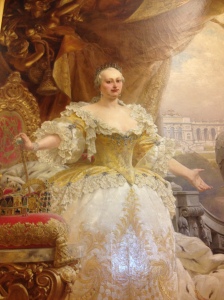 Maria Theresa was not the most fair or loving mother, but she had her good points.  I wrote about her at: