On March 28, 1941, Virginia Woolf wrote a loving letter to her husband, Leonard Woolf, and walked out of her country home in rural Sussex, Monk’s House.  She made her way to the nearby River Ouse.  On its banks, she filled her pockets with stones, waded in, and drowned.  Her body was recovered almost 3 weeks later. She was 59 years old.  She was a central figure of the intellectual and artistic Bloomsbury Group, whose influence is still felt.  Virginia herself was an avant-garde novelist who changed the shape of the English novel with works such as Mrs. Dalloway, Orlando, The Waves, and To the Lighthouse.

Last year I visited Monk’s House, now a National Trust property. I was thrilled to walk in the footsteps of Virginia and Leonard Woolf.

Virginia had suffered bouts of debilitating depression for much of her life, but she had always recovered. Between illnesses, she was a fun-loving friend and a wonderful conversationalist.  But she needed a certain amount of “alone” time in order to create. 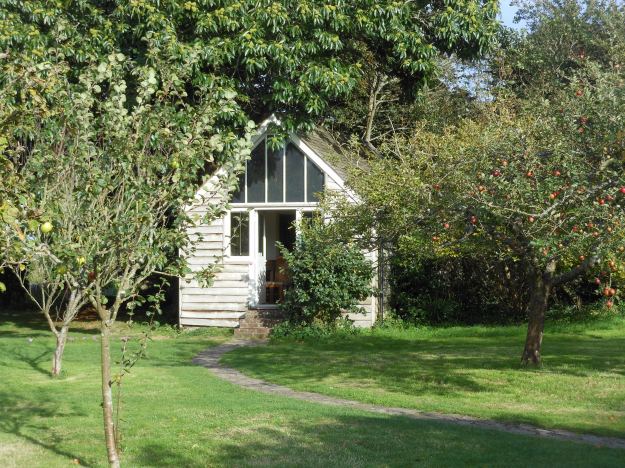 In her country garden, she spent long hours composing her ground-breaking novels and thoughtful essays in her writing shed. It is furnished just as she left it.  It looks as though she just stepped out for a stroll through her flowers.

One of Virginia’s most famous works is the long essay “A  Room of One’s Own,” in which she examined the need for women to have solitary time and space in order to create. She knew all too well that most women had no writing shed or other personal space. Maybe her need for creative time and space is what prompted a friend, Lady Ottoline Morrell, to describe Virginia as “this strange, lovely, furtive creature.”

Inside the house, I could imagine long and lively discussions at the dining table, with the likes of Roger Fry, Lytton Strachey, John Maynard Keynes, T.S. Eliot, and H.M. Forster, not to mention Virginia’s sister the painter Vanessa Bell. 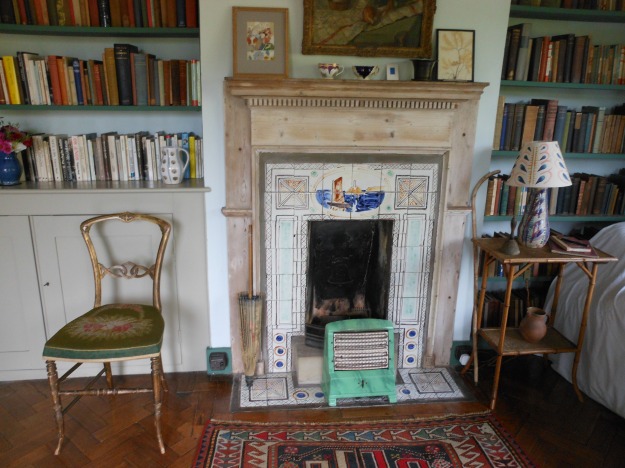 Her bedroom was originally added to the house as a writing studio.

But Virginia liked the airy room so much she decided to sleep there.  I would too. 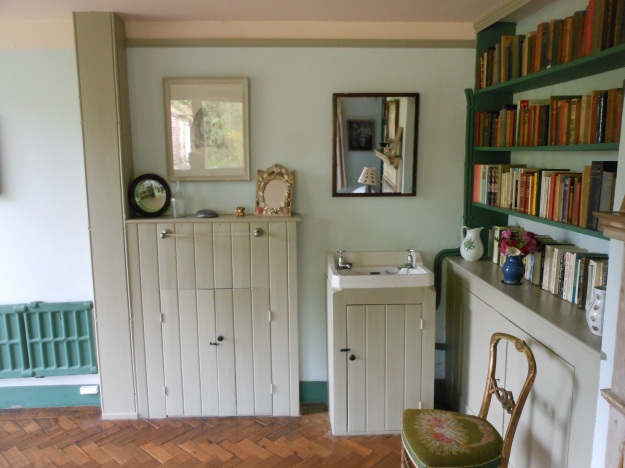 Naturally, there are books everywhere in the house.

The drawing room is cosy, set up for long evenings of reading and conversation.

Are these his-and-hers chairs?  I can imagine Virginia in one and Leonard in the other. 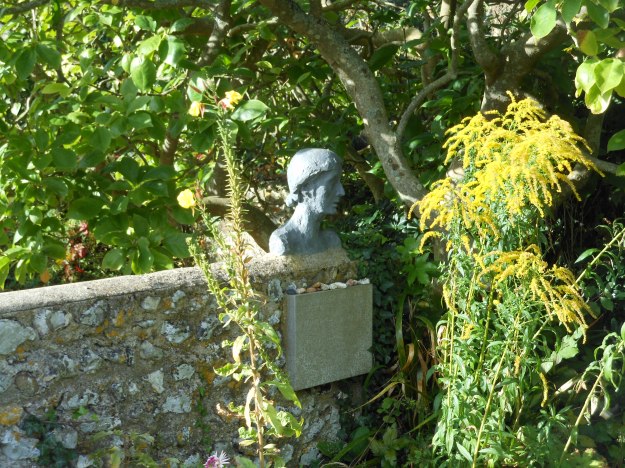 After her death, Leonard had Virginia’s ashes buried in their beloved garden. A bust of Virginia stands nearby.  Her admirers leave stones beneath it.

Later, Leonard’s own ashes and bust took their places near hers. In her final letter, Virginia sadly explained that she could not bear another episode of what she called her “madness.” Possibly she suffered from what we would now call bipolar syndrome. At any rate, she described hearing “voices.” The last line of her final letter read, “I don’t think two people could have been happier than we have been.”

The photo  at the top of this post is from the article cited below, “Virginia Woolf: The Woman Who Remade the Novel,” by Jonathan deBurca Butler. The photo, of Virginia in 1902, is by George C. Beresford. The article is an excellent summary of Virginia’s life, her sad death, and her continuing influence on modern literature.

Monk’s House is wonderfully maintained by the National Trust. Charleston Farmhouse, where Virginia’s sister Vanessa Bell lived, is nearby.  I would highly recommend a visit to both.