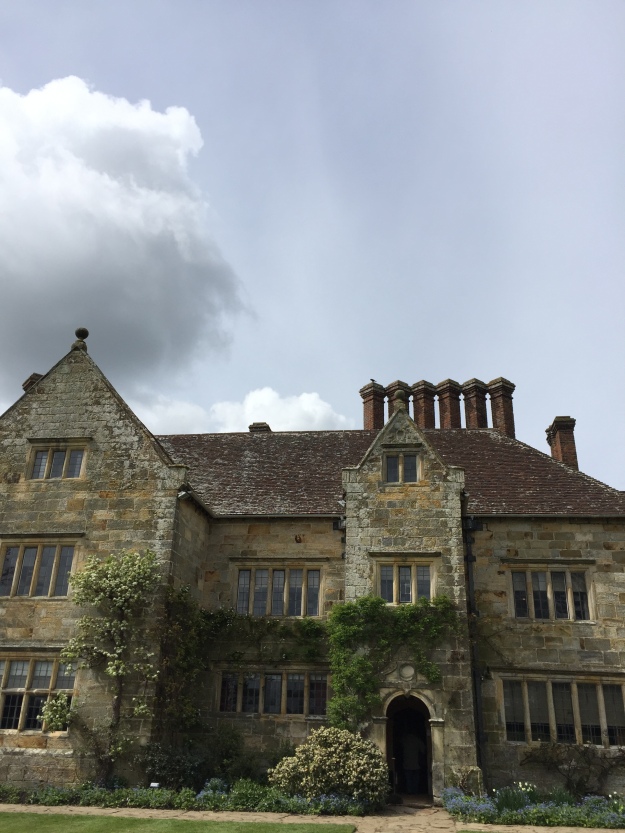 The Nobel prize-winning British author Rudyard Kipling died on January 18, 1936 in his beloved country home, Bateman’s, aged 70. The house is deep in the rural countryside of East Sussex, close to the site of the Battle of Hastings. 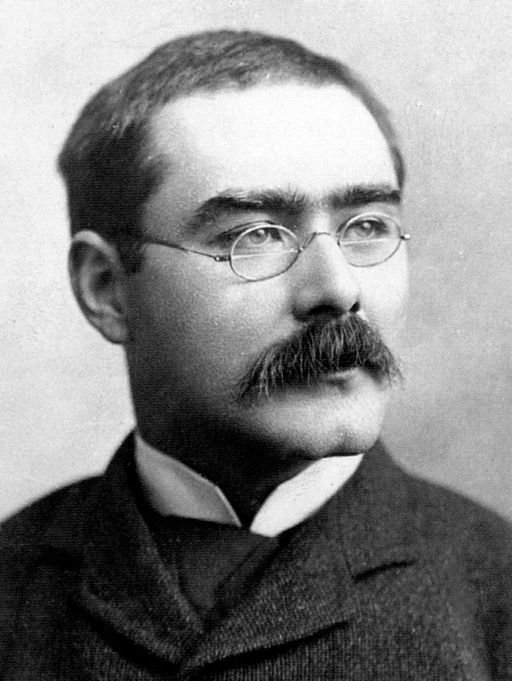 I have to confess I’m not really familiar with much of his work, but I loved visiting the home where he and his wife chose to spend the last 34 years of his long and productive life. 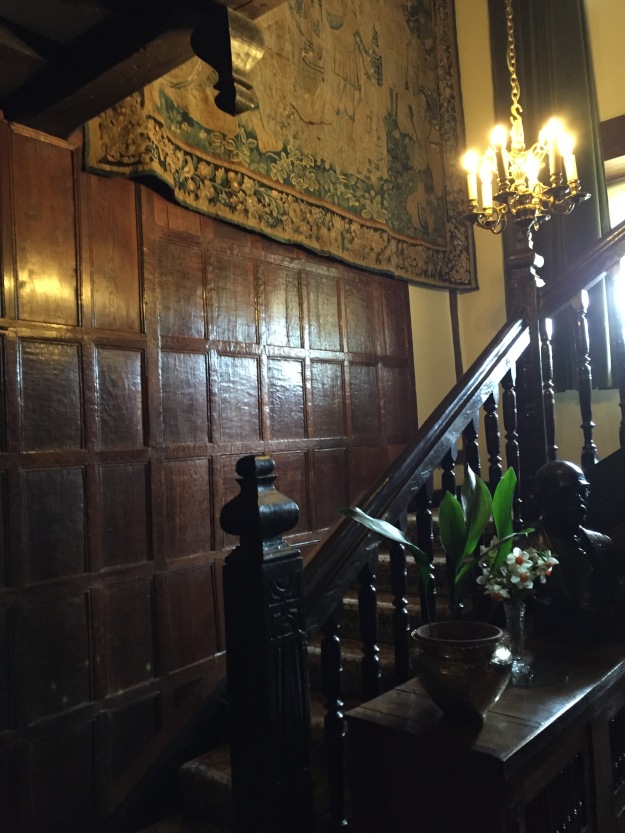 They bought the house in 1902.  It had  no bathroom, no electricity, and running water was only downstairs. But Kipling wrote, “Behold us, lawful owners of a grey stone lichened house–A.D. 1634 over the door–beamed, panelled, with old oak staircase, and all untouched and unfaked. We have loved it ever since our first sight of it.” 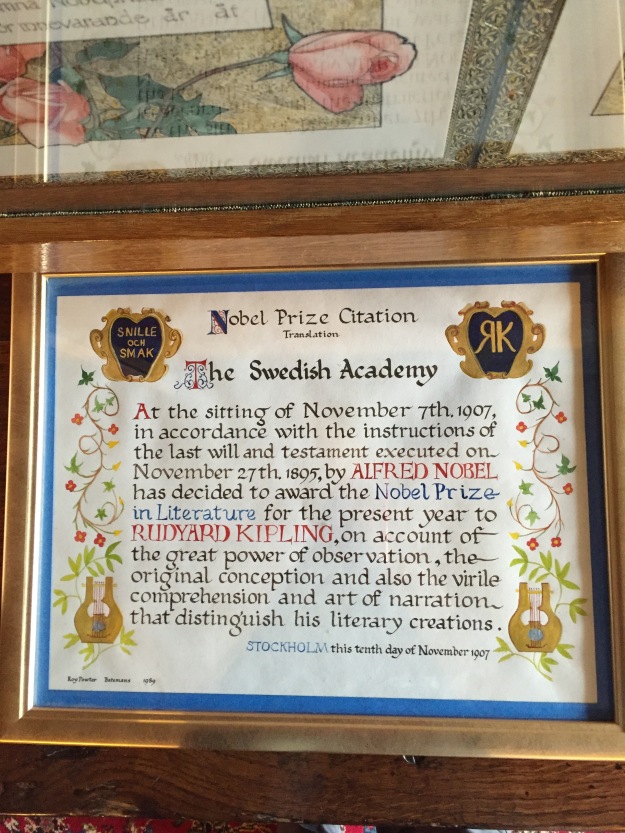 The house is now in the hands of the National Trust.  Most of the furnishings are from Kipling’s happy time there. It is hard for us to appreciate just how famous this man was even before he was awarded the Nobel Prize for literature, but the house was a peaceful retreat from Kipling’s busy life–he was active in politics and journalism, besides literature, all his life. 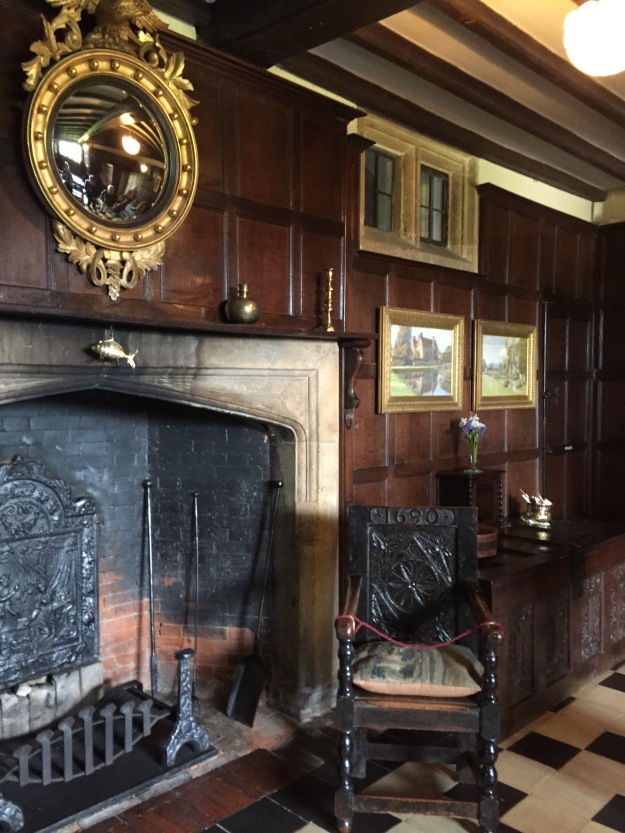 His wife Caroline ran his affairs, working tirelessly in a tiny hidden office with a window looking out into the entry way, above and to the right of the fireplace.  She kept an eagle eye on the many people who knocked on the door, seeking time with the great man.  Not many were admitted when he was working in his study, pictured below. (We should all probably have someone like Caroline to turn off our internet when we want to get something accomplished). 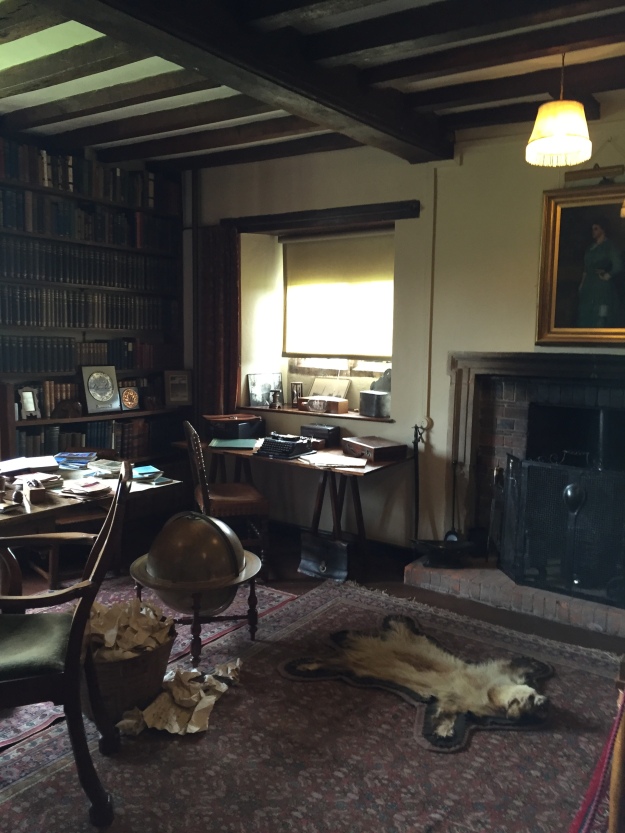 Kipling spent a good part of his working life in India and Africa, writing about both the glories and pitfalls of British imperialism.  He wrote with foreboding about the difficulties–and the morality–of maintaining the global British Empire, which was still in its heyday during Victorian times. 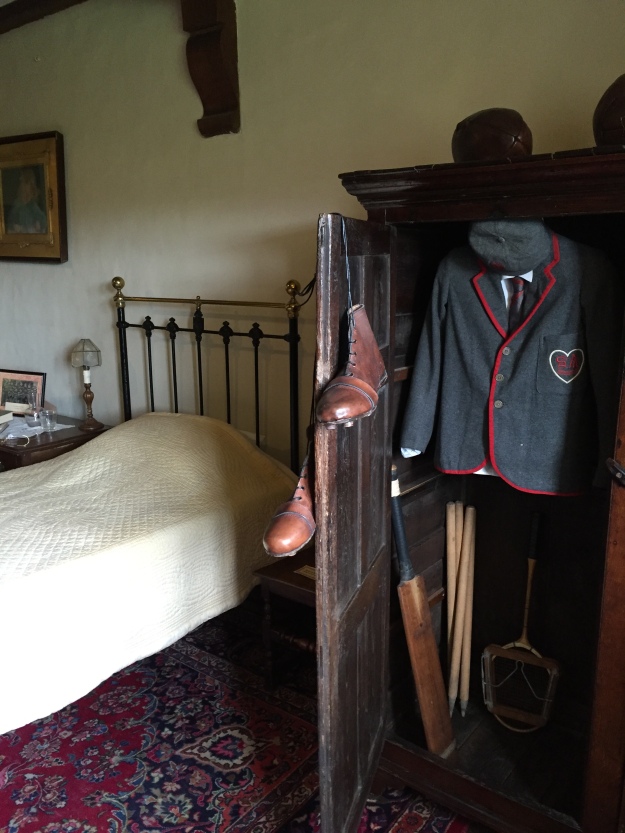 In 1915, at the outbreak of World War I, Kipling’s son John was wild to join the fight.  He was rejected by both the Royal Navy and the Army because of poor eyesight.  So Kipling used his connections to get his son into the Irish Guards. John Kipling was killed in the Battle of Loos, aged 18, having been sent in with reinforcement troops.  He was last seen stumbling blindly on the battlefield, possibly from a face wound. His childhood bedroom, pictured above, is a poignant memorial to a lost son. 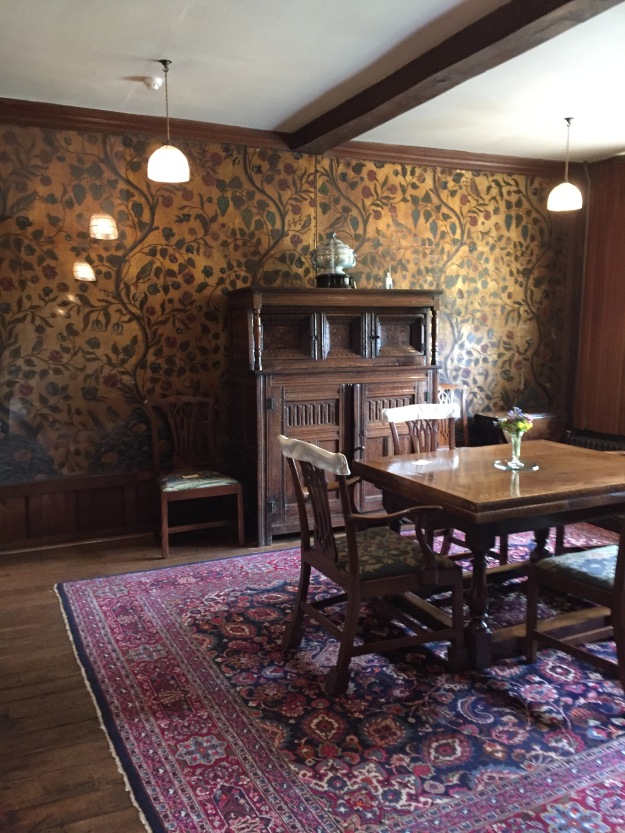 I especially liked the dining room. The walls are covered with embossed leather brought from India. 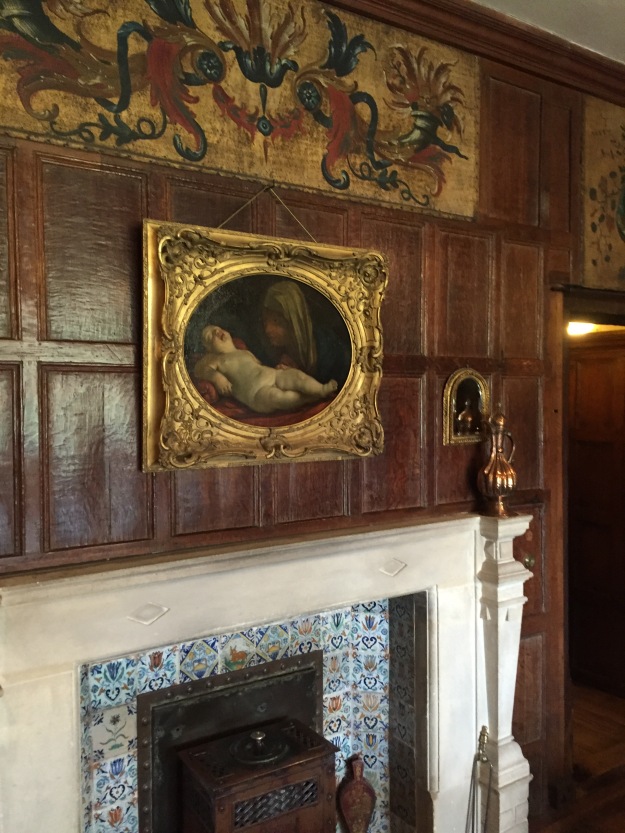 Above the fireplace is a painting that everybody in the family hated, but it was too good to get rid of. (Or maybe it was a gift from someone who was not to be insulted? I have items like that in my house, but I generally just get them out when the giver is visiting). The painting really is pretty ugly. It seems to show a naked crying baby, maybe with a mother or nanny wondering what to do. 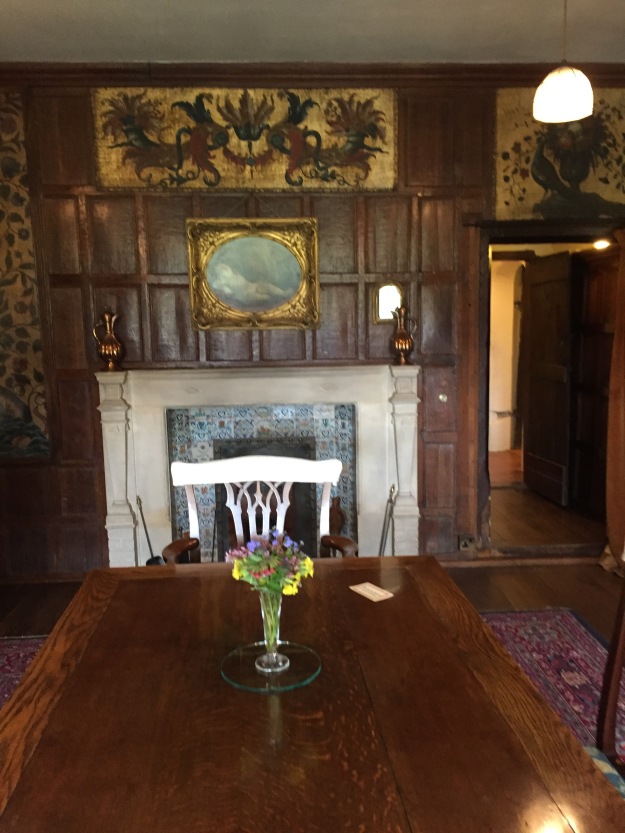 Mr. Kipling’s chair was placed so that his back was always to the hated painting. 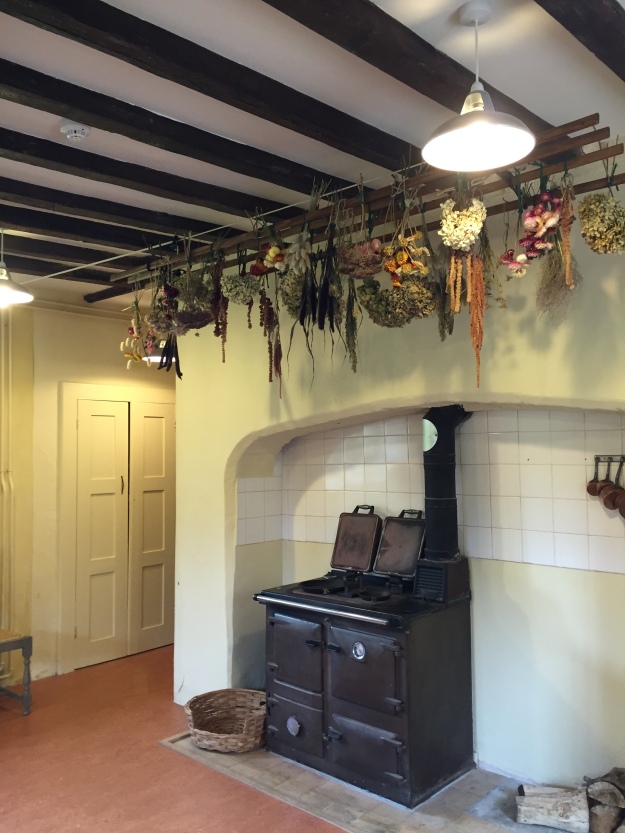 I think the kitchen must have had modern conveniences in the years leading up to Kipling’s death in the house in 1936.  Now, it’s a serene mostly-empty space where National Trust volunteers and staff dry flowers from the gardens. 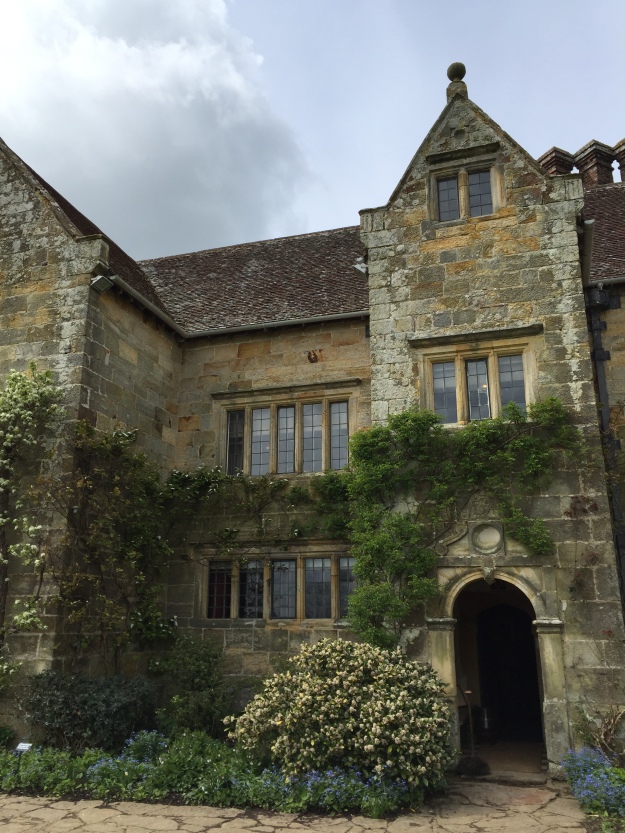 Literary fashions come and go, even for Nobel prize winners.  Having seen Rudyard Kipling’s country home, maybe I’ll find the time to dip into his writings. I’m sure Mr. Kipling would appreciate a visitor.