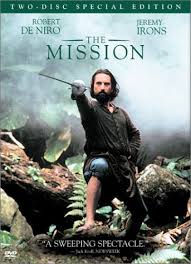 Monday, October 13 is Columbus Day across the United States.  However, not everyone feels like celebrating the “discovery” of continents where well-developed civilizations already existed.  In Minneapolis, where I spend a lot of time, the City Council voted in April 2014 to substitute “Indigenous Peoples’ Day” for Columbus Day.

Thinking about controversies surrounding Christopher Columbus, I went back and watched a great film, The Mission. The British film was made in 1986 from a script by Robert Bold, directed by Roland Joffe. It won the Palme d’Or at Cannes and an Academy award for cinematography.  It’s a somewhat-fictionalized version of events that actually took place in the 1750s, in the mountains of Paraguay. The story is taken from the book “The Lost Cities of Paraguay” by Father C. J. McNaspy, S.J., who was also a consultant on the film. For me, the story dramatizes some of the heartbreaking conflicts between missionaries and politicians in the colonial period. Conflicts surrounding the exploitation of native lands and peoples continue in our time. 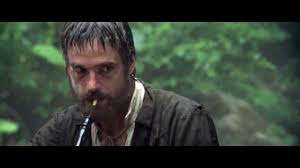 The main character, Father Gabriel, is played by Jeremy Irons.  The character is based on a real-life Paraguayan Jesuit, Father Roque Gonzalez de Santa Cruz, who became a saint. After a priest in his charge is martyred by a Guarani tribe above a perilous waterfall, Father Gabriel climbs up the steep stone face carrying nothing but a flute.  Warriors surround him as he sits on a rock and plays.  It turns out they love music; they let him stay, and he develops a mission that helps them in material as well as spiritual ways. They are not exploited. Instead, they prosper.

The outside world arrives in the form of a mercenary soldier played by Robert de Niro. He has a lucrative sideline in the slave trade.  He sets a huge net as a trap in the jungle; soon he has a netful of tribe members, and he hauls them off like so many rabbits, to be sold into slavery. Soon afterward, he murders his brother in a jealous rage. Although he is acquitted, he experiences remorse for the first time in his life.  Father Gabriel, on a visit to the city, challenges the mercenary to atone for his sins and change his life.  As penance, the mercenary hauls his net, loaded with all his armor and possessions, tied to a rope and dragging behind him.  He climbs up to the mission above the falls, fully expecting to be shunned or even killed.  He is amazed and humbled when the tribe members forgive and welcome him; over time, he becomes a Jesuit himself. Liam Neeson is excellent as a young Jesuit, in one of his earliest roles.

The rest of the movie concerns further encroachments of the outside world.  Father Gabriel’s mission–and six others like it–are under the protection of Spain, which outlaws slavery.  In 1750, the Treaty of Madrid gives part of Paraguay to Portugal, which encourages slavery. Suddenly, the missions are ordered to close. The Church cannot risk allowing the Jesuits to violate the treaty; the Spanish could shut down their order entirely if they resist. Other religious orders could be barred from the colonies.

The film is available at Amazon. The story of the colonization of the “New World” is complex, The great colonial powers of England, Spain, France, and Portugal set out explicitly to exploit whatever they found in the “New World,” people and resources alike. But the members of the various religious orders set out for the colonies with a sincere desire to improve the lives of the people, however misguided their methods were at times.  They were able to do a lot of good that remains to this day. A film like “The Mission” invites us to share in the moral quandaries of times past, and to think about those of the modern world.