If I could move into any house I wanted in the English countryside, I’d take Standen, near East Grinstead in Sussex.

The house has a complicated floor plan, built in stages. I’m not exactly sure what was older and what was newer. The final stage was to link the new building to the original farmhouse on the property, Great Hollybush (I’d have kept that name!)

It is not a particularly grand house–in fact, that is the point. It was built by the architect Philip Webb, a close friend of William Morris, in 1892-94. 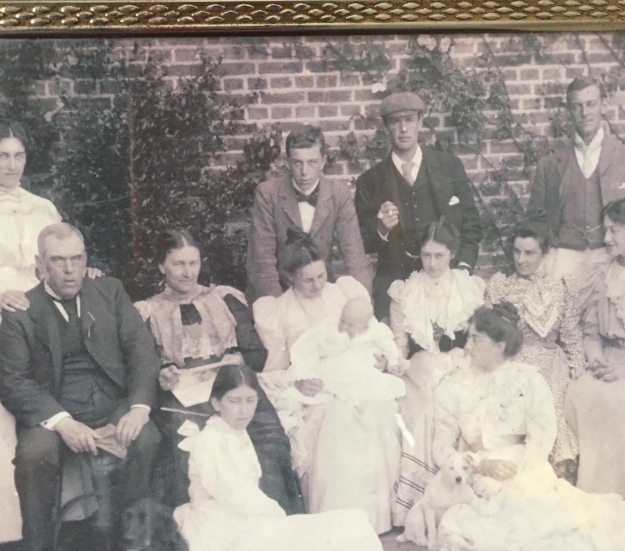 The client, James Beale, was a very wealthy solicitor who had made his fortune in London. At age 50, Mr. Beale wanted a beautiful but functional second home in the country for his wife and their seven children. The children were already beginning to marry and move away, but Standen remained the gathering place for children and grandchildren for almost eighty years.

Philip Webb and William Morris had met in their twenties at Oxford. They immediately hit it off, and collaborated on projects for the rest of their working years.

I’d love to hire “The Firm” today. They were the very opposite of the sleek throw-away esthetic of IKEA. (Not that I don’t own plenty of practical IKEA stuff!)

James Beale was a hardworking, pragmatic, sober, simple-living family man. He wanted a comfortable family home, not a showplace. But he was willing to pay for quality.

His idea of luxury was a house big enough to contain the hijinks of his large family and lots of visitors. 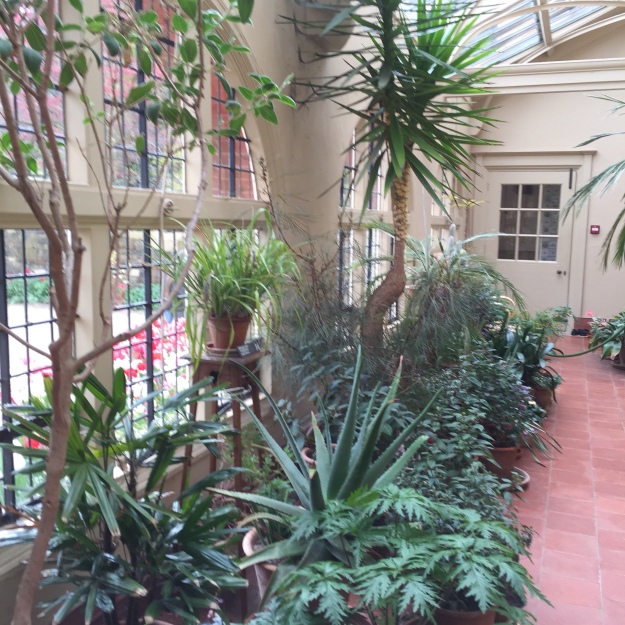 The house is large and filled with daylight. The conservatory was a favorite place to lounge and read.

Billiards, anyone? The house had electric lighting from the beginning. 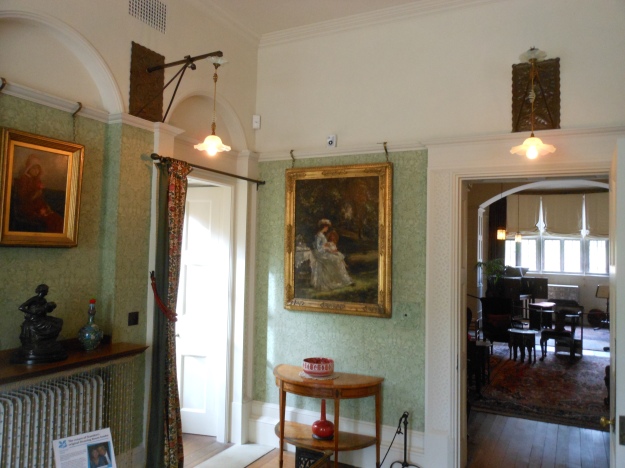 All the fixtures were specially designed, most of them by W. A. S. Benson, who trained under William Morris. 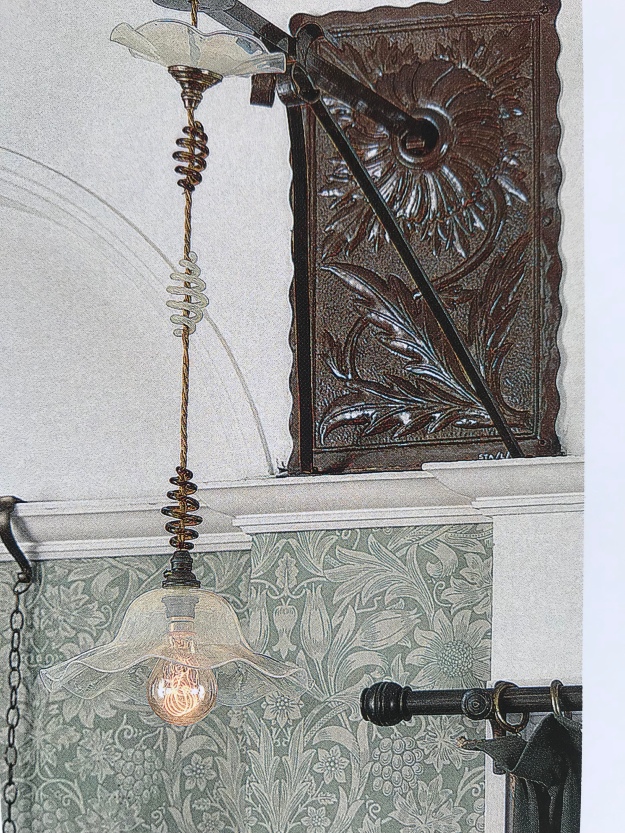 The effect is subtle but beautiful, even in daylight.

The Beales did not need any grand rooms for entertaining; they just wanted to relax and enjoy each other’s company. 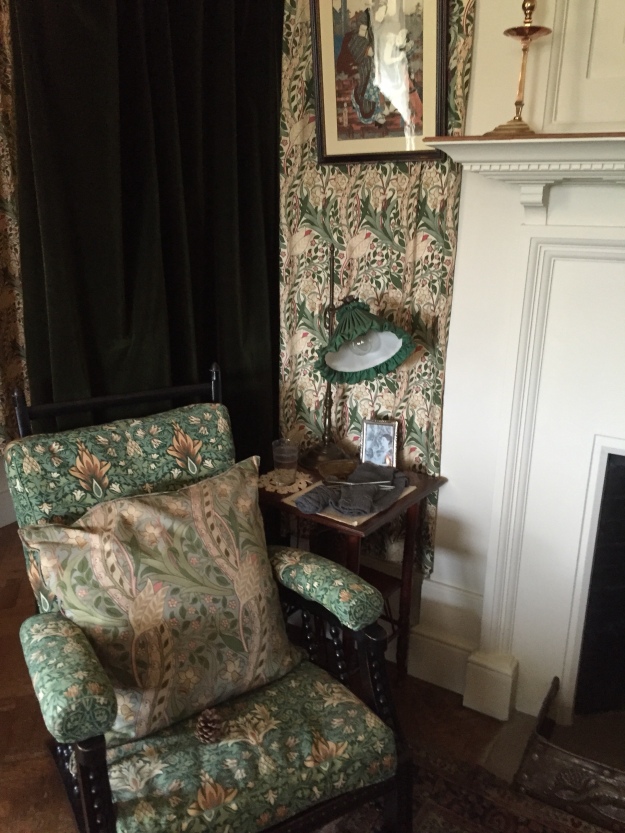 Most of the textiles and wallpapers were William Morris designs.

Margaret Beale was creative and handy with any kind of needle.

She kept her children busy making things for the house. 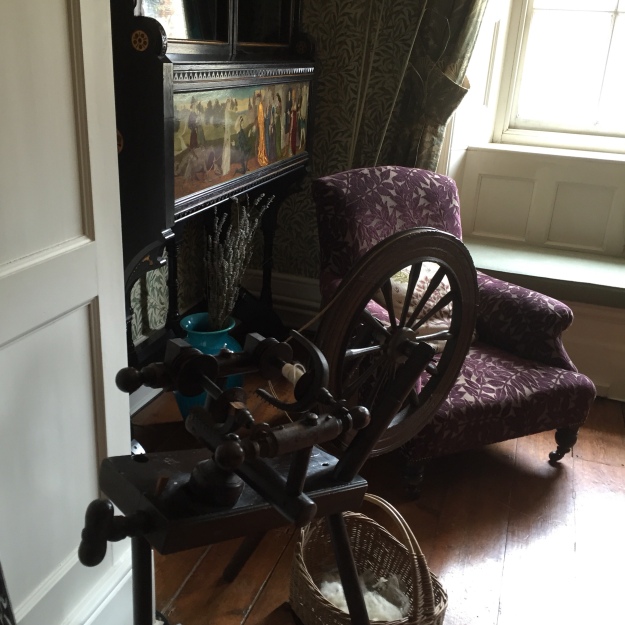 One of the daughters, Maggie, never married. She stayed at Standen and became a skilled artist and designer in her own right.

Maggie’s studio is one of the most pleasant rooms in the house. It seems like she could breeze in at any moment with an idea for a painting or a sofa cushion. 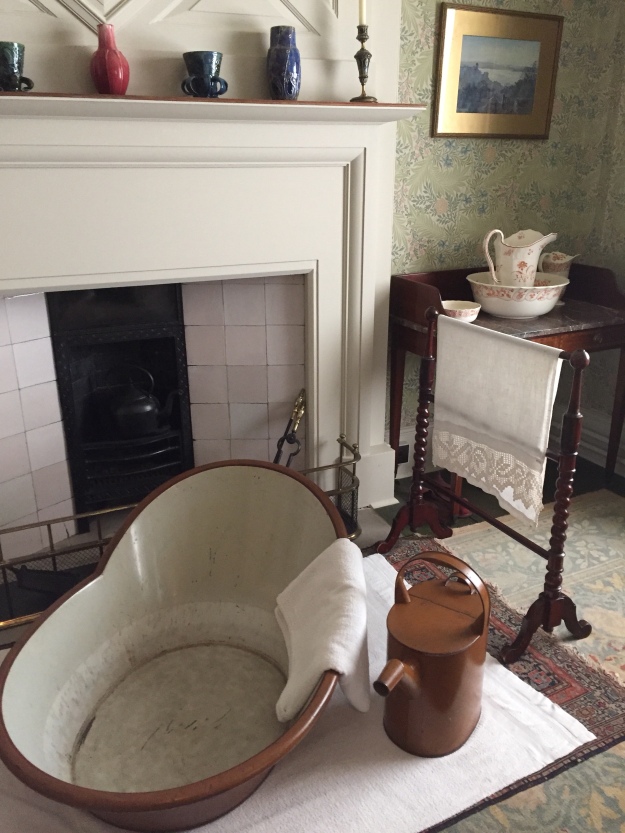 My other favorite room is the Larkspur Bedroom, so named for the William Morris wallpaper. I like the built-in wardrobes and I LOVE the tub in front of the fire (the maids may not have loved lugging pails of water up and down stairs for it).

Mr. Beale and his architect were old-fashioned and a bit frugal. The floor with all the bedrooms had only two “necessary” rooms and one bathroom. (I think bedrooms still had chamber pots and maids still had to deal with them). 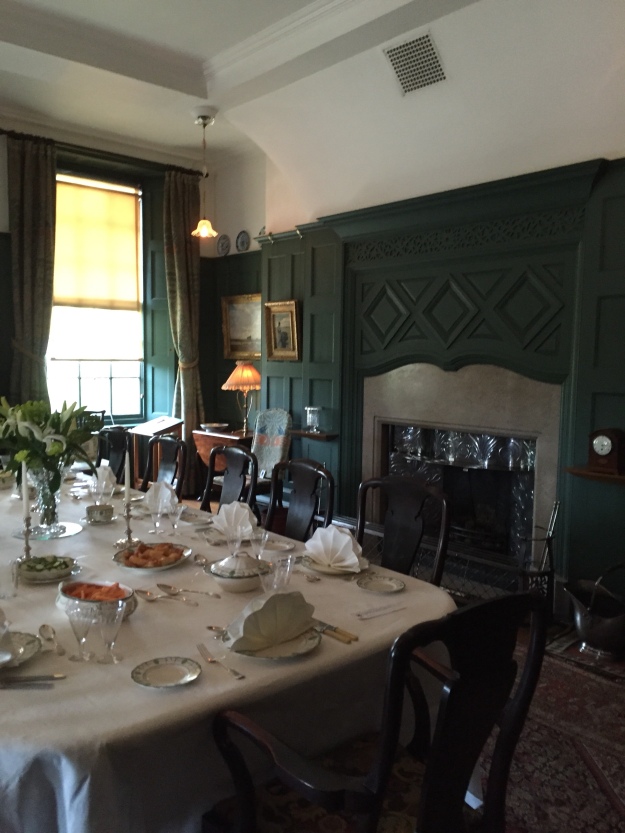 The family enjoyed their meals and they were big eaters. The children used to have contests to see who could pack on the most weight from a single meal. The family record was five pounds, put on by one of the boys. (The family dressed for dinner. I guess someone’s satin cummerbund must have felt a little tight after that epic meal). 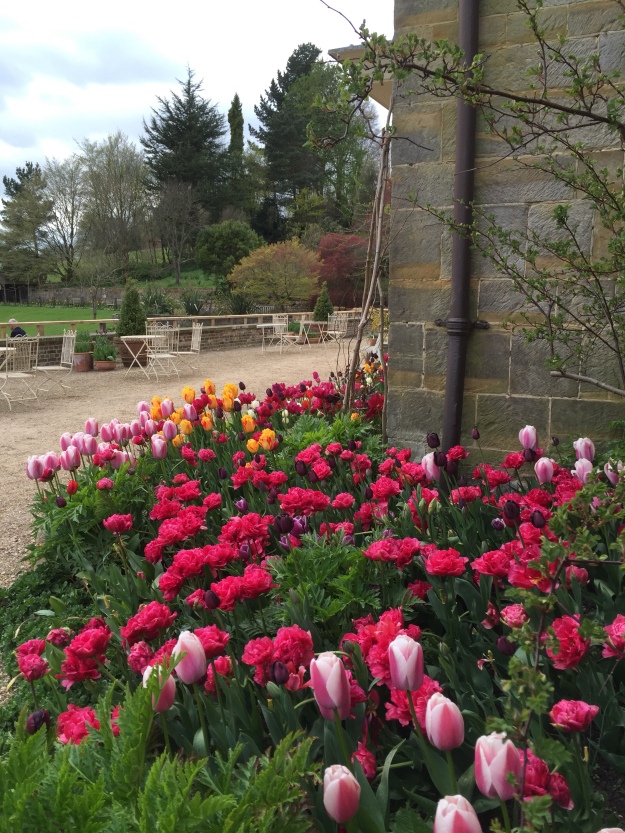 The children had plenty of room outside to burn energy. There were flower beds and a kitchen garden and woodlands to explore.

Then as now, there were chickens right outside.

And the door was always open to the home the Beales created, where everything was useful or beautiful–or both.