My new second-favorite chateau is one I had never even heard of until my recent trip to France. (My favorite chateau is the incomparable Chenonceau, which was built spanning a river in the Loire Valley). The story of how a penniless woman, born in a prison, came to be the second wife of the Sun King is strange but true. Chateau de Maintenon is close to the cathedral city of Chartres, and I came across a brochure about it in the Chartres tourist office. 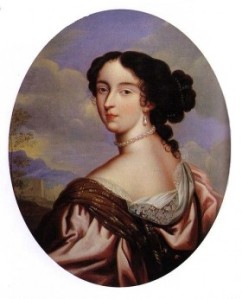 The woman who eventually became Madame de Maintenon was Francoise d’Aubigne, born in the prison where her ne’er-do-well father was incarcerated in 1635.  She married an invalid older man, an aristocrat who brought her into the highest social circles before obligingly dying and leaving her with a sizable royal pension. After awhile, though, Louis XIV suspended the pension and she was left high and dry. One of her friends was the current favorite mistress of the King, the Marquise de Montespan. Francoise became the caretaker of the King’s many illegitimate children with his favorite mistress, about 8 as far as anybody knows.  Francoise was discreet and did her job well.  The King rewarded her with a pile of money, which she used to buy the Chateau in the town of Maintenon.

Eventually the King tired of the ill-tempered Montespan, and took up with Francoise, giving her the title Marquise of Maintenon. The King’s wife died.  He was in his early forties, beginning to feel like an old man, and beginning to be concerned about his sins.  He married the Marquise sometime in 1685-1686. She remained at his side for 30 years, his most trusted confidant for the rest of his long life.  The marriage was officially secret, but courtiers had to accept the low-born Marquise de Maintenon as a permanent fixture, like it or not. It was a seventeenth-century version of an old story:  the rich man marries the nanny. (In this case, the nanny was actually a few years older than the King, and considered overly pious in the French court. But Louis appreciated her qualities).

Today the chateau and its gardens are lovely and as inviting as they must have been when the King used the Chateau as a homey escape from the crowds at Versailles. The Marquise was given rooms adjoining the King’s at Versailles and in all the other royal residences, so she rarely had time to visit her own beloved chateau once she was married.  For the rest of her life, though, she had flowers and foods grown on her estate delivered to her.

Join me next time for more explorations in the fascinating art and history of Europe!