In 1967 and 1968, the artist and activist Friedensreich Hundertwasser delivered his famous “Naked” speech as a kind of manifesto of his ideas at the time.  He appeared naked, and rounded up some friends willing to do the same.  The idea was that a human being has three “skins:” the epidermis, the clothing, and the dwelling place.  (This makes me wonder whether Hundertwasser ever designed any clothing).

He certainly designed the exteriors of buildings, the most famous of which is the Hundertwasserhaus apartment building in Vienna.  He took it as a sacred right that a human being should be able to express his individuality in the exterior of his living space, instead of being consigned to an anonymous box. He also designed the nearby museum that houses many of his paintings, mosaics and other works of art. Various exhibits explain the artist’s ideas, and there are many beautiful paintings.  The paintings remind me of Paul Klee’s work, but they are much larger in scale and more colorful.  Unfortunately, photographing the paintings is not allowed. 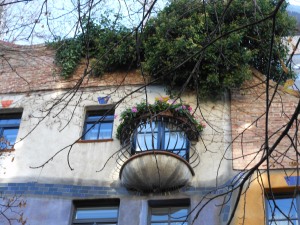 Hundertwasser believed all urban buildings should have roof gardens.  He actually believed it would be feasible to make these roof gardens burial places for the residents of the buildings.  Somehow, this particular idea never really caught on. Still, Hundertwasser felt that a tree should be planted on top of every grave, instead of installing a headstone.  That way, he said,  you could visit the burial place of your grandfather and say, “This is my grandfather, the tree is growing well, fantastic.”  Eventually, when he died in 2000, he was buried according to his wishes under a tulip tree on property he owned in New Zealand. This wish was in stark contrast to the grand and ghoulish burial customs of the Habsburg dynasty, which deserve their own post later on. 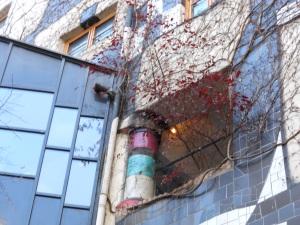 Hundertwasser’s ideas live on, in the minds of the many artists and thinkers he influenced. His ideas also live on in the enchanting museum he created for his work, in a quiet area of Vienna away from the tourist trail. I visited in the middle of winter.  The building has a number of “tree tenants:” trees which occupy balconies, flourishing in only a square meter of soil. I’m sure that now, in springtime, Hundertwasser’s beloved “tree tenants” are leafing out, making the concrete canyons of at least one street green with new life.

What are “window rights?” The visionary artist/architect/activist Friedensreich Hundertwasser believed that life in big cities destroyed human individuality, unless the buildings themselves allowed each person to create a unique exterior.  For the apartment building he designed in Vienna, the Hundertwasserhaus, he decreed this revolutionary idea:

I’m sure the people who live in the Hundertwasserhaus are used to tourists staring up at the facade of their home.  Still, I tried to be discreet when I was there.  I couldn’t help taking a picture of one person’s way of decorating a balcony, though: with a plaster replica of Antonio Canova’s “Venus Victorious.”  The original, a breathtakingly lifelike and lifesize creation in marble, reclines in regal splendor in the Galleria Borghese in Rome. The model was Napoleon Bonaparte’s sister Pauline; her husband was the Borghese prince who commissioned the piece.  Pauline was quite a free spirit in her day.  When asked if it bothered her to pose nude for the sculptor, she replied that it was no problem because the room was heated.

This reproduction, perched on the railing of a slightly scruffy apartment balcony, tells me that an interesting person lives inside. The free-thinking spirit of Friedensreich Hundertwasser lives on in the building he designed, too.

Now that I’ve been to the Kunsthauswien, I’m sure I’ll make my way there every time I’m lucky enough to be in my favorite city, Vienna.  The medium-sized museum, dedicated to the artist Friedensreich Hundertwasser, is just a short and fun tram ride outside the center. The artist was born Friedrich Stowasser in Vienna in 1928.  His mother was Jewish, and as he became a teenager the Nazis were coming to power.  In order to be inconspicuous, the mother and son posed, as many people did, as Christians.  The father had been Catholic, so this was dangerous but doable.

After the war, Hundertwasser spent several months at the Academy of FIne Arts (which had famously rejected aspiring painter Adolf Hitler–not once but twice). As he developed as an artist, Hundertwasser renamed himself: “Friedensreich” means something like “Peace-realm” and Hundertwasser means “Hundred Waters.” The name was perfect for the artistic career that he developed, with all his work aimed at peace, joy, organic forms, union of humanity with nature, and incredible diversity.  He worked in just about every medium available to an artist, and threw in architecture, environmentalism, and social activism on top of it all.

Hundertwasser especially wanted to bring nature back into cities.  One of his more radical ideas was the uneven floor surface, recreating the natural state of the outdoors.  The Kunsthauswien has such floors.  The floors are not only uneven, but cheerfully covered in bright mosaics. Walking on them is, in the very appropriate expression from the sixties, a real trip.

A caption quotes some of Hundertwasser’s ideas about the value of uneven floors: “If man is forced to walk on flat floors…estranged from man’s age-old relationship and contact to earth–a decisive part of man withers and dies…The uneven floor becomes a symphony, a melody for the feet and brings back natural vibrations to man.”

The nearby Hundertwasserhaus apartment building has such floors throughout.  I wonder what the residents actually think of their floors.  Do they get used to the waves and bumps, or do they sometimes stub their toes in the middle of the night?  I glimpsed a couple of residents visiting on a park bench in their apartment courtyard, and was tempted to ask them what they thought.  But the apartments are peoples’ private homes, so I left them in peace. 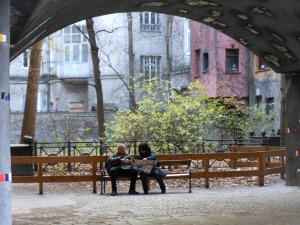 Last time I was in Vienna, I finally took the time to have a look at the Hundertwasserhaus. It’s a short tram ride from the center, in a residential neighborhood of big apartment blocks.  Anyone who has ever taken Art History 101 has studied this innovative apartment building, constructed between 1983 and 1985 according to the ideas of Friedensreich Hundertwasser. He was a one-of-a-kind artist, architect, environmentalist, philosopher, social activist and general pain in the neck to “the powers that be” during his lifetime. For instance, he sometimes appeared completely naked when asked to give a lecture.  He was far ahead of his time, though.

The apartment building itself is hard to really look at; it’s crowded into an urban block, and since its residences are private, tourists can’t enter for a look around.  More interesting is the nearby museum devoted to Hundertwasser and his art, the Kunsthauswien. 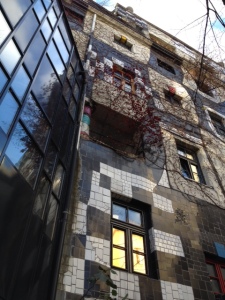 I especially liked the Tree Tenants: a number of balconies are occupied by trees, creating a vertical green landscape right in the middle of a sterile urban block. Hundertwasser wrote extensively about trees as legitimate residents of city buildings. He commented, “Cars have chased the trees up into the storeys of houses…We suffer daily from the aggressivity and the tyranny of our vertical sterile high walls. But streets in the cities will become green valleys where man can breathe freely again.”

There’s a funky cafe and terrace in the back of the museum, a perfect place to contemplate the life and times of a thinker and man of action. Colored bottles installed in a window, where other people might think of using stained glass?  It makes perfect sense, in this enchanting museum off the beaten path in Vienna.