I was startled to see a familiar-looking face among the treasures in the National Gallery in Washington, D.C., and even more startled that I actually knew his name.  It was Lorenzo de’ Medici, known during his lifetime as “Lorenzo the Magnificent.” His image appears all over Florence, Italy.  He lived from 1449 to 1492. This likeness is in painted terracotta.  Reportedly his brother Giulano was much better-looking, but Lorenzo was the one groomed for power.

Lorenzo inherited his family’s banking fortune, built up starting with his grandfather, Cosimo.  The Medicis were great patrons of the arts in the Renaissance, and Lorenzo was privileged to take over the family fortune at about age 20.  He continued  and even expanded his family’s tradition of supporting great artists like Sandro Botticelli and Michelangelo. 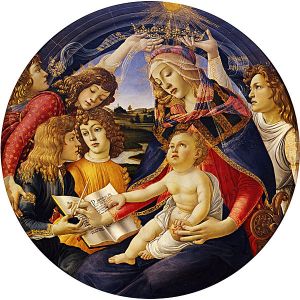 It was common for artists to use members of their patron families as models. In this Madonna by Botticelli, Lorenzo’s mother Lucrezia, a poet and patron of writers, is the Madonna. Lorenzo is the young man obligingly holding the inkpot.

At the time he took over, the family’s banking fortunes were already in decline due to overspending and political struggles. Still, Lorenzo used his wealth, political pull bribes and various strong-arm techniques to maintain a fragile peace among the notoriously fractious rich families of Italy.  His lifetime was known as the “Golden Age of Florence.”

Like his father and grandfather, Lorenzo was the de facto ruler of Florence, important enough and annoying enough to some people that he came very close to being assassinated. On Easter Sunday 1478, he and his entourage were attacked–in Florence Cathedral.  The conspiracy was instigated by the rival Pazzi family, and backed by the Archbishop–and even by the Pope. Giuiano was killed, but Lorenzo escaped with only a stab wound. After he died (later, peacefully), things went downhill for the Medicis in Florence.  In fact, Lorenzo’s successor was known as Piero the Unfortunate.