My friend, Judy Gunthorpe, sent me an entertaining message about a trip on a piece of history:  a steam train in England.  She lives in Bristol–very close to Tyntesfield.  Steam trains were an important part of the industrial development that allowed people like the Gibbs family of Tyntesfield to build their fortunes. Judy and I must have been on the same wavelength!  With her permission, I’m sharing her article below.  (I say she needs her own blog–I hope this is a start).  All aboard!

It’s 8.30am on a Sunday morning and I’m sitting on a steam train at Bristol Temple Meads station. Without any fanfare, a platform overhead light turns to OFF, two guards wave their paddles and, imperceptibly, as if magically, we glide forward.

This is the Royal Duchy trip organised by the The Railway Touring Company and we are heading for Par in south Cornwall. There are 8 carriages and a kitchen carriage. Immediately behind the engine are four Premier coaches where passengers have paid £179 for a full English breakfast and a three course ‘silver-served’ dinner. The next three coaches are First Class, offering morning coffee and Danish pastries and afternoon tea with scones and finger sandwiches. We are in the single Standard carriage of 64 seats with tables of four, where everyone has brought their own picnic and ‘sharing’ happens!! (At half the cost of the Premier service we think we’ve got the best deal). 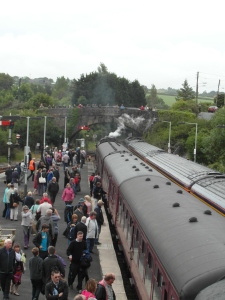 The other couple at our table have driven over from Lincoln and are steam aficionados! They stopped yesterday at Cheltenham Racecourse for a mini local steam ride. Armed with DIY safety specs from Wicks, they spend most of the journey south with their heads out of the door window. Hmmm!!

Coupling Up to Carriages

We stop at various stations to collect more passengers and there is almost an hour’s Water scheduled delay at Exeter.  The old ‘automatic’ boiler water pipes alongside the tracks have been removed, so refilling now requires a very different process. During this stop we actually climb onto the footplate, warm ourselves by the open, roaring furnace and chat to the drivers. They are dressed in denim with the compulsory neckerchief. They tell me its ‘jolly chilly’ in their open cab compared to the protected equivalent of a modern engine. 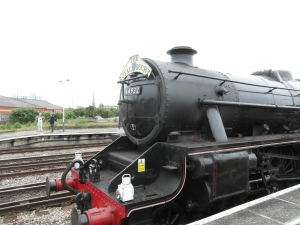 Warned by the early morning weather forecast of ‘bad weather ‘over the south-west we are prepared with kagools and umbrellas. It was cold but dry as we left Bristol but by Taunton the drizzle had begun. Along the causeway towards Teignmouth the rain cascaded down the windows.

All along the route we see steam fanatics waiting on balconies, in fields, in back-gardens, on bridges. They wave, click cameras and jot down details. The stations appear to have suspended the ‘ticket only’ entry to platforms, allowing anyone / everyone access to this special engine.

At Dawlish Warren we pull onto a side track to allow a faster Intercity to race past, and at Newton Abbott there is an unscheduled hold-up because a Great Western train needs to disembark some unruly passengers! This presents a disadvantage when we do set off; ahead is the worst climb of the journey – the third steepest main line bank on the British mainland – and we’ve no momentum to assist us. As we head for the Dainton Tunnel we are almost at walking pace. It’s when the engine struggles up these inclines I can hear the chatter of the wheels – ‘I think I can, I think I can’!!

Some years ago my husband Robin saw a Bristol-Penzance rail offer for £10 return. Collecting the tickets, he was delighted to find that, for another £5, we could travel First Class and enjoy unlimited tea, coffee and biscuits. We planned to take the bus on to Land’s End. However, due to ‘wet rails’, we arrived five minutes after the bus left!! Walking to St Michael’s Mount the weather was so cold and miserable I needed a brandy to recover!

Robin produces a bag of strange tasting gummy sweets. On inspection, I see they are from Target, so originated in Colorado. That makes me look closer – to find the sell-by date was December 2012. He argues they are pretty inert so exceeding the date by six months will have no effect.  Later, during our 3 hour turn round time at delighful and scenic Charlestown, near Par, we enjoy afternoon tea. Robin has a scrumptious genuine scone and cream and I manage to demolish a generous slice of pecan pie.  Sadly, within 5 minutes of leaving the coffee shop, my cake has left me!!  Now, was that caused by those odd sweets????

The Man in Charge

The journey home always seems shorter that the outward leg, and dusk falls as we cross the Somerset levels. We notice bats flitting round and the cattle, who all day have fled from our unusual sounds, simply lift their heads to look. As our carriage attendant collects the rubbish and tidies things away, I eavesdrop surrounding conversations; pet cats, hospital visits, long train journeys, future train trips, gradients and speed. My own thoughts revert to my father putting me on a train at Liverpool Lime Street and my mother meeting me at Euston Station for a half-term break. Yes, we could travel alone as children safely in those days. It’s time to snooze  – until the motion slows and we gently settle back on Platform 10 in Temple Meads.  For now, we are all ‘steamed out.’

Thank you, Judy!  It’s almost as good as being on that train myself!

Join me next time for more adventures in exploring Europe and the British Isles.