I’ve found that April is really a better month than May in England. It actually rains less in April than in May. It’s cool, but I just wear an extra layer. No one expects to completely avoid rain in England, but sunny days are a big plus.

On a clear spring evening in Windsor, Queen Victoria stands sturdily on her pedestal and gazes majestically over the town. In this land of tradition, royalty begins to make sense even to an American puzzled by the idea of hereditary privilege. Victoria seems like a benign grandmother to one and all. No doubt she would approve of the very traditional name given to the new Princess of Cambridge, Charlotte Elizabeth Diana. Certainly the phenomenon that was Diana caused turmoil for the Royal Family, but then Victoria had troublesome children of her own. I imagine she took the long view. 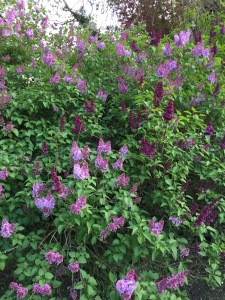 Spring flowers are in full bloom. Lilacs are fresh and fragrant. 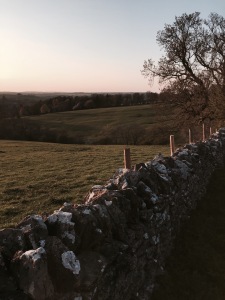 Stone fences neatly divide fields where every square foot has been lovingly farmed over many centuries. 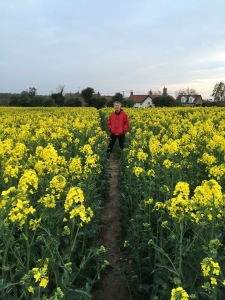 Public footpaths on private lands crisscross the entire country. The British consider keeping them public to be a sacred right, open to everyone. They’re muddy in rain, but easily walkable in dry weather. 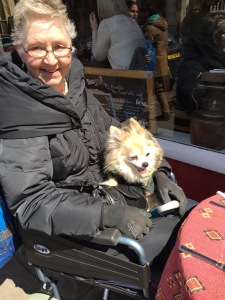 The British love their dogs (and their cats too). The little fellow above was dressed in a stylish fur-lined hoodie for a slightly chilly outing in Cambridge with his doting person.

I get lonesome for pets left at home. B and Bs in the countryside often provide loaner pets on request, if you ask nicely. My new friend Ruby lives on a pretty farm in rural Suffolk.

I had never been to the area north and east of London before–it’s off the main tourist trails.  In fact Rick Steves does not even mention the area, except for Cambridge. That may change, with William and Kate settling in Anmer, close to the coast in Norfolk.  And I think I had a Johnny Depp sighting!  Rumor has it that he bought a mansion in Burnham Market, a very posh but rural little village near Anmer. I think I spotted him driving right past me in a nifty Griffith sports car.  If the “east of England” is good enough for the royals and for Johnny Depp, it’s good enough for me.

I really do love England, in any season!