At daybreak on the morning of December 6, 1491, the fourteen-year-old Duchess Anne of Brittany married the 21-year-old King Charles VIII of France in somewhat-rushed ceremony that had to be kept secret until the ink on the wedding contract was dry. And when the provisions of the wedding contract were revealed, there was general shock and awe. The wedding changed the map and the history of France.

The dramatic tableau of life-sized figures in the Great Hall of Langeais Chateau is one good reason to make a stop there, but it’s not the only reason. 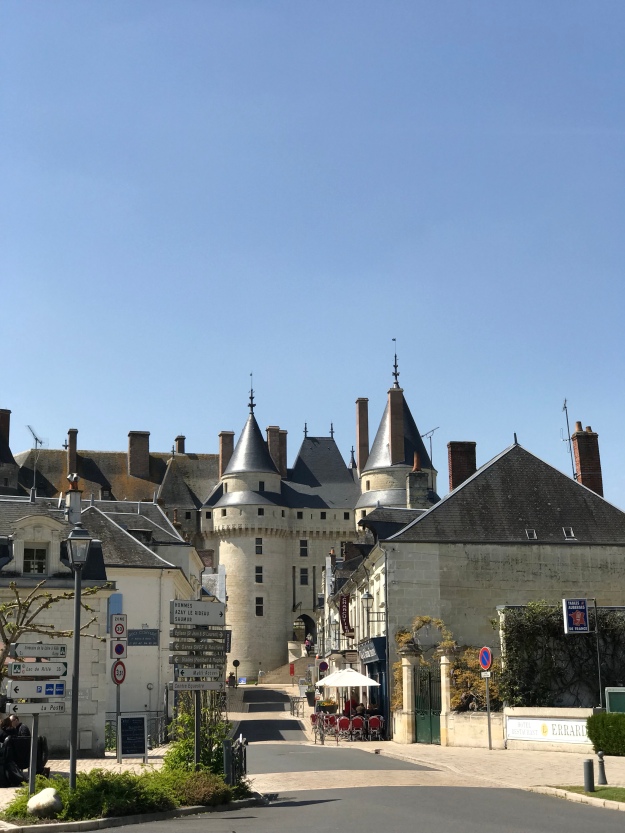 The late medieval chateau of Langeais towers above its pretty town on the banks of the Loire. The location has been in the thick of French history since around 992, when Foulque Nerra, Count of Anjou, built a wood-and-stone keep. 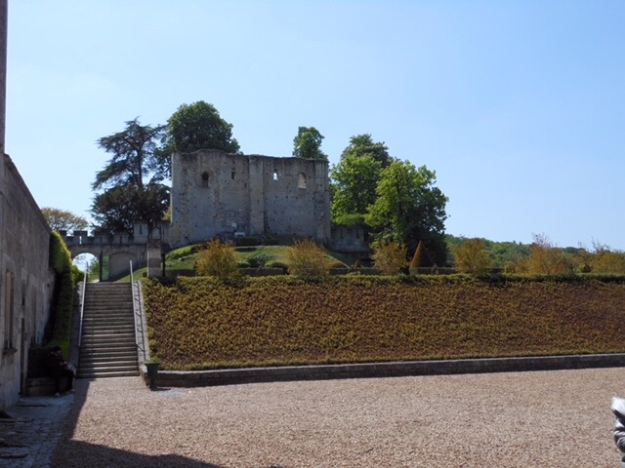 The keep is now a ruin in a pretty park above the medieval chateau.

The elevated ground overlooking the River Loire, where the smaller River Roumer feeds into it, was a prime defensive spot because from its heights, whoever held it could fend off any intruders. And there were plenty of intruders.

The Counts of Anjou and Blois were constantly trying to grab chunks of each other’s lands.

According to the chateau guidebook (written by Jean Favier of the Institut de France), whoever held Langeais controlled the middle part of the Loire. Langeais changed hands several times in the years before Foulque died in 1040. His son had to defend it against Blois, just as his father had before him. The Counts of Anjou and Blois were far more rich and powerful than the King of France at the time.

In the 1200s, the Counts of Anjou expanded their territories through judicious marriage (maybe they learned something from the Hapsburgs, who were past masters of this handy skill). Geoffroi Plantagenet extended his territories northward into Normandy. His son, Henry II, married Eleanor of Aquitaine and became King of England.

Beginning in the early 1200s, Langeais became less a military stronghold and more a prize given by the French Crown to various noblemen. The Loire Valley was “discovered” as prime second-home property–which it still is today. Nobles began building bigger and grander chateaux, far beyond the time when they were needed for defense. 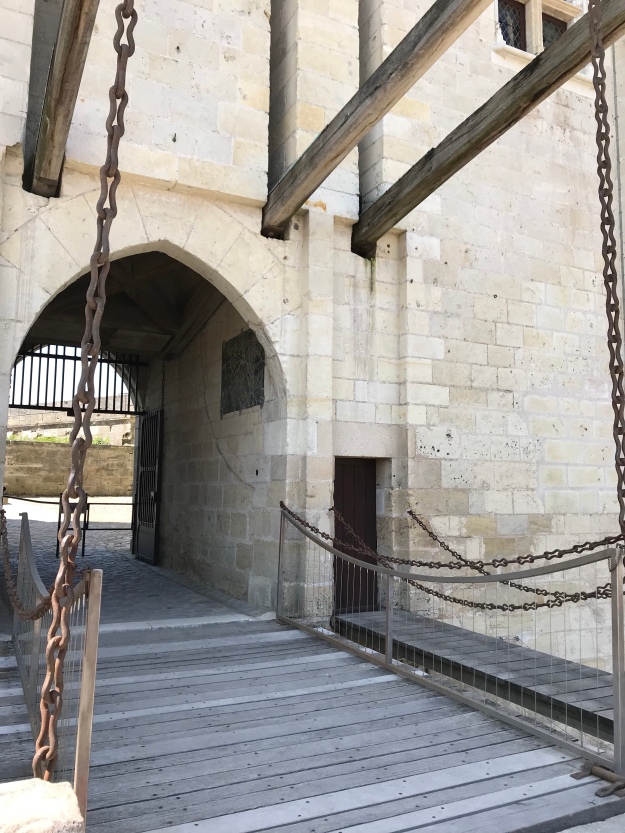 Starting in 1495, Louis XI built the castle we see today. By this time, everybody who wanted to do battle had gunpowder and long-range cannons, so high walls with places for archers to hide were of no use against a determined enemy. There were no such enemies, but still, a new castle had to look a certain way. No self-respecting chateau would lack an intimidating drawbridge. 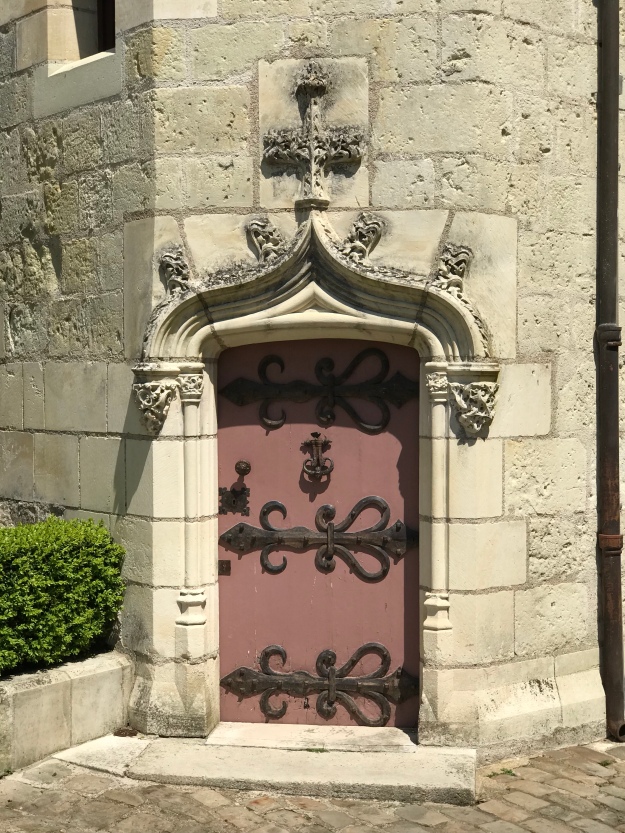 Elegant doorways were required inside the courtyard.

Round towers with pointy roofs grandly topped things off.

Inside, though, the castle deteriorated as centuries went by. It was abandoned during the Revolution. Then it went though a succession of owners who found it a bit much to maintain. In 1838, the town came close to buying it, to house a school, the town hall, and a jail. But it went instead to first one and then another rich owner.

Finally, in 1886, Jacques Siegfried bought it. He was a fabulously wealthy businessman who had already explored the world. He was ready to settle in Langeais and restore the chateau to a Victorian/Romantic idea of a princely late-medieval home. Monsieur Siegfried consulted the best historical experts, so most likely his ideas were pretty accurate. 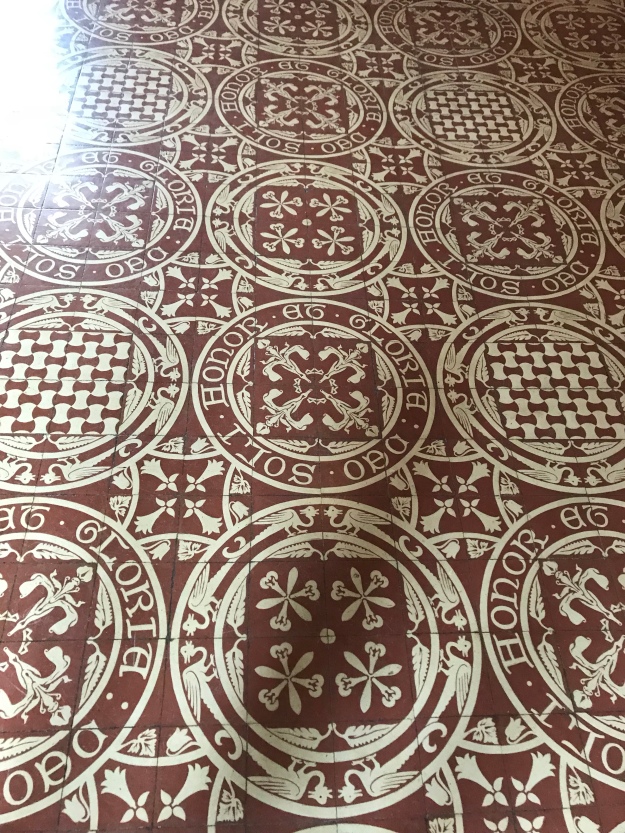 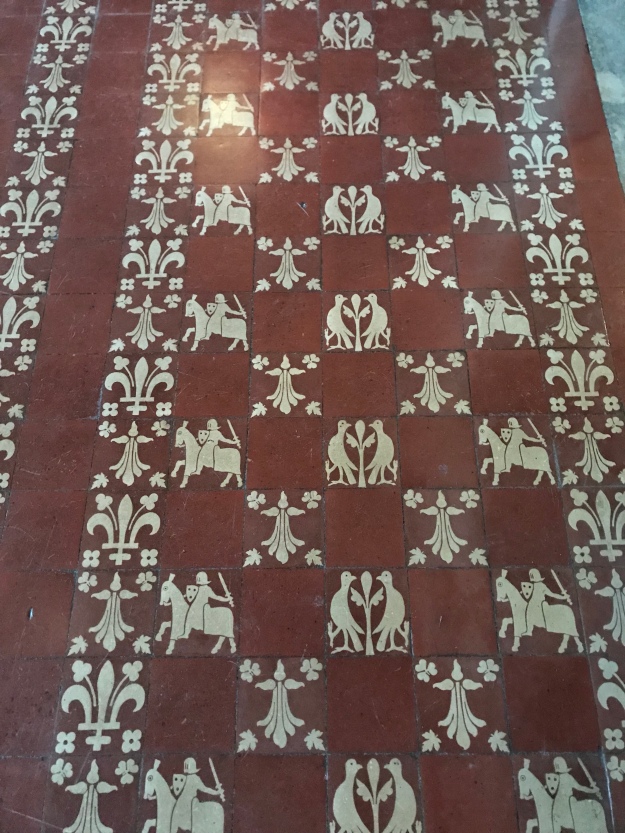 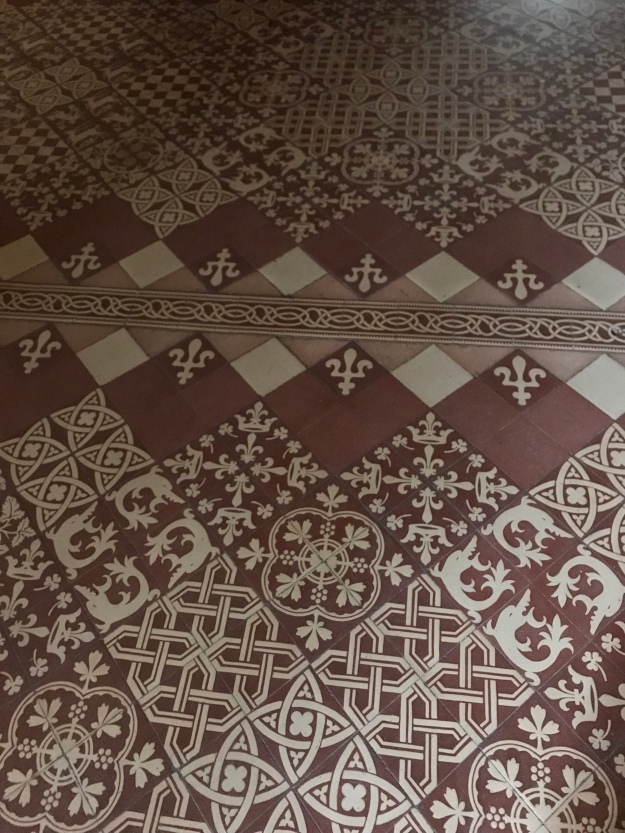 He commissioned beautiful glazed tile floors based on old designs.

He located beautiful old tapestries for the walls. 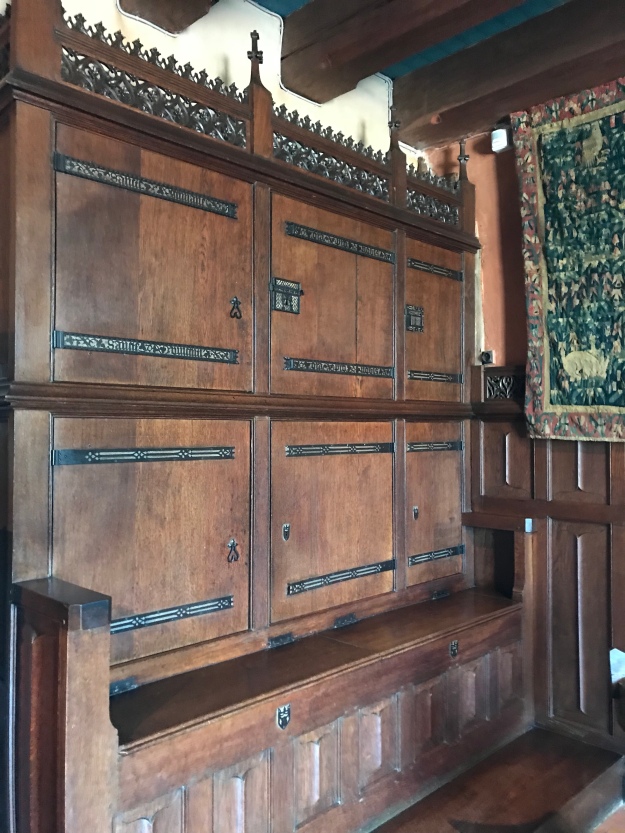 Monsieur Siegfried filled the rooms with authentic furniture–most of it portable, as furniture was in the days when nobles and royalty traveled from castle to castle.

I think some of the furniture was built from old illustrations, like this high chair and baby walker. 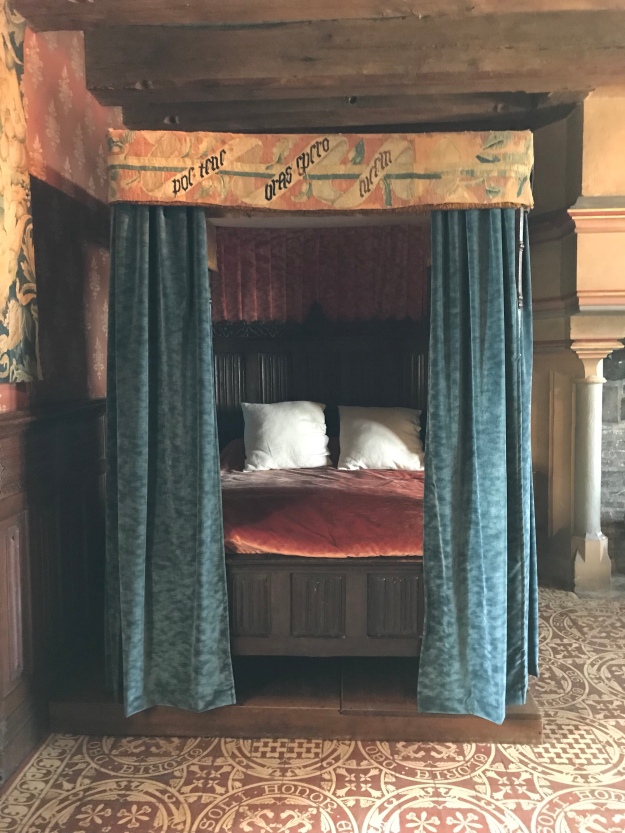 Medieval castles were drafty; the rich had elevated beds draped with cozy textiles. They also had big bolster-like pillows on which they slept nearly sitting up. There was a belief that lying down all night might cause death. (Presumably the servants and poor folks were too exhausted at the end of the day to have this worry).

The bride on that cold winter morning in 1491 was the “It” girl of her time: Anne of Brittany, heiress of the vast and wealthy lands of Brittany. The groom was the young King of France, Charles VIII. All over Europe, princes and nobles wanted to marry Anne. She was actually married already, by proxy, to Maximilian of Hapsburg, who was in line to become Holy Roman Emperor. But he was busy dealing with revolts in his lands; he dragged his feet in getting together with his bride, and the political winds shifted. Charles VIII did not want to be encircled by his enemies. He was already betrothed to Margaret, the daughter of Maximilian. But Charles’ people talked to Anne’s people, and a deal was struck.

The prize was Brittany, and the French Crown needed it–permanently. So the marriage contract stated that if Charles died without male heirs, Anne would marry his successor–who was also present at the wedding, looking eagle-eyed at the contract. And well he might. He was Duke Louis d’Orleans, who would actually become King Louis XII and marry Anne within a few years.

Of course Anne’s proxy marriage and Charles’s betrothal had to conveniently disappear, and the dispensations had not yet arrived from Rome. But the deed was done once the marriage contract was signed. (Nobody talked about the fact that the bride’s magnificent wedding gown of cloth of gold, trimmed with sable, had been a gift from Maximilian). 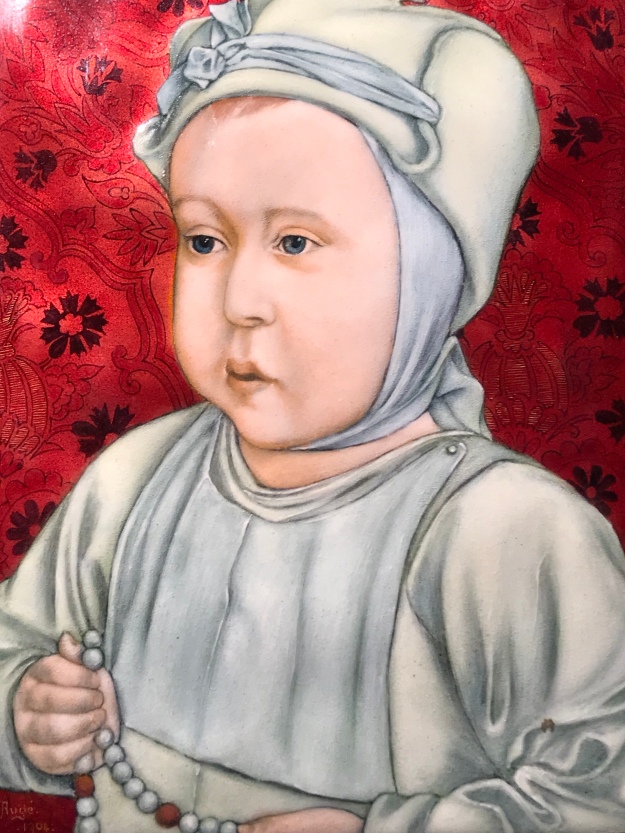 A few years after the wedding, Charles was rushing to a tennis match in the Chateau d’Amboise: he whacked his head on the lintel of a door and died. He had no heir. His cousin, the Duke d’Orleans, was already married, but he readily obtained an annulment so that he could marry Anne, as spelled out in her wedding contract. (I have to wonder whether Anne might have secretly thought she was off the hook on the agreement to marry her husband’s cousin. But political needs were stronger than anyone’s personal needs. The inconvenient wife was sent packing in short order, and the new royal wedding took place).

Anne dutifully spent her life trying to produce a male heir, first with one royal husband, then with another. She never succeeded. One report says that she was pregnant about every 14 months, but only two daughters survived to adulthood. (One daughter was Queen Claude, wife of King Francois I. If anything, her royal life was even more trying than her mother’s, and she died at age 24). A touching 19th century enamel, above, depicts one of Anne’s sons, who died as a small child from measles. Anne died of a kidney stone attack at age 36, worn out from constant pregnancies.

Langais was given to the Institut de France in 1904. The dramatic figures of the wedding tableau were made by sculptor Daniel Druet and costume designer Daniel Ogier. I’m not sure when they were made, but I first saw them about ten years ago. Now, the display seems even more impressive. 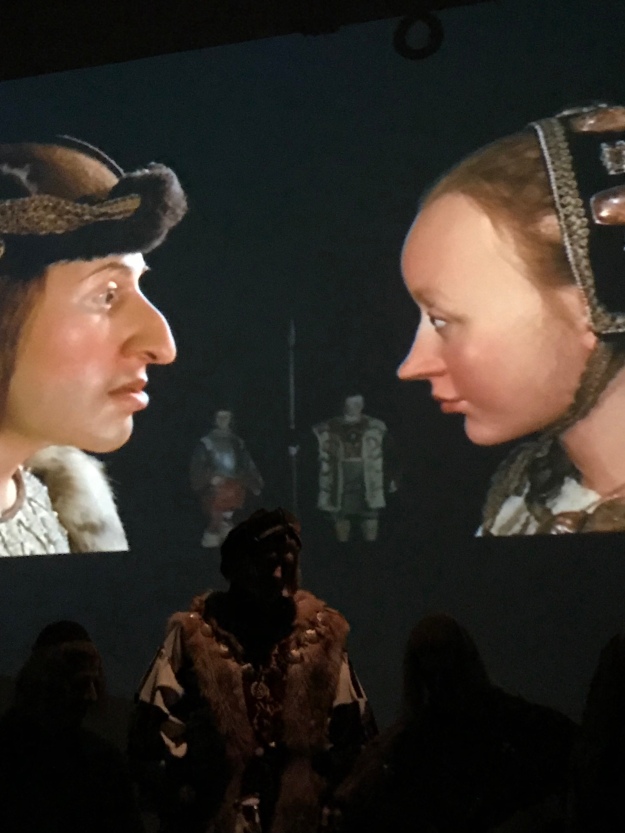 Four times an hour, the Great Hall darkens, images are projected on the wall, and a narrator tells the dramatic story. It’s in English once every hour. Hopeless Francophile that I am, I went back and listened again, to the French version. Somehow it seems even more dramatic in French. 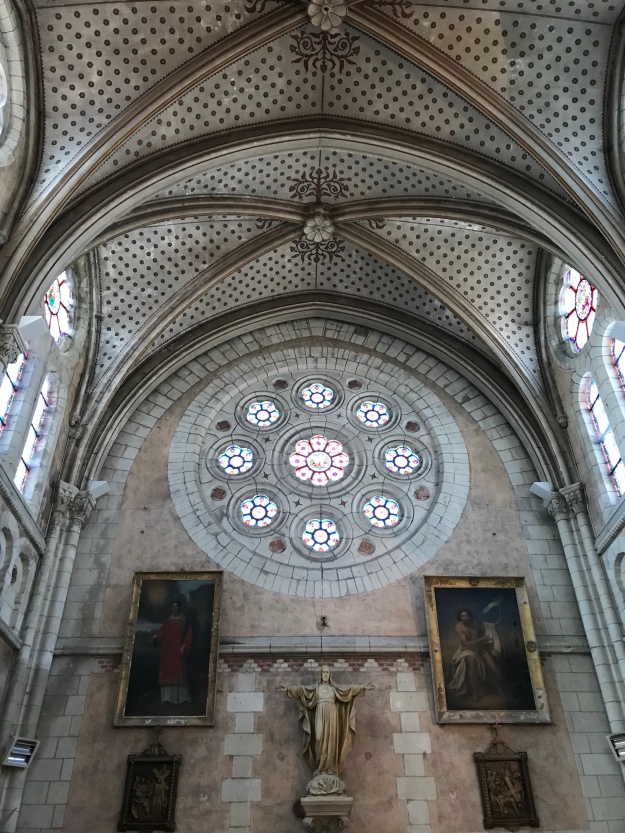 Langeais is a very pretty town with nice shops and restaurants, plus the beautiful Church of St. John the Baptist. 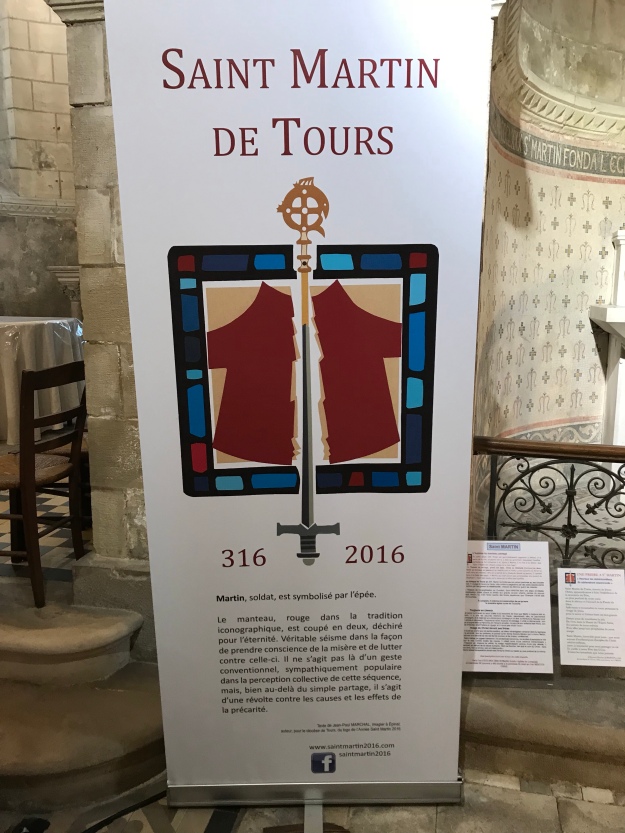 The church was founded in the fourth century by St. Martin of Tours–the soldier who famously cut his warm cloak in half to give to a naked beggar. The present building was begun in the 900s and modified over the next few hundred years. It still functions as a parish church, and I think it hosts concerts as well.

Langeais would be a good base for another trip to the Loire Valley! Hmmm…