If you turned up at the entrance to a grand home in Britain without an invitation, you’d likely be told to go around to the servants’ entrance. If you were obviously respectable and had a convincing story, you might be shown into the drawing room to wait for the master or mistress. But if the maid or butler was not sure whether you were fish or fowl, you’d be told to cool your heels on a hall chair. The one above is at Attingham, a Georgian mansion near Shrewsbury. 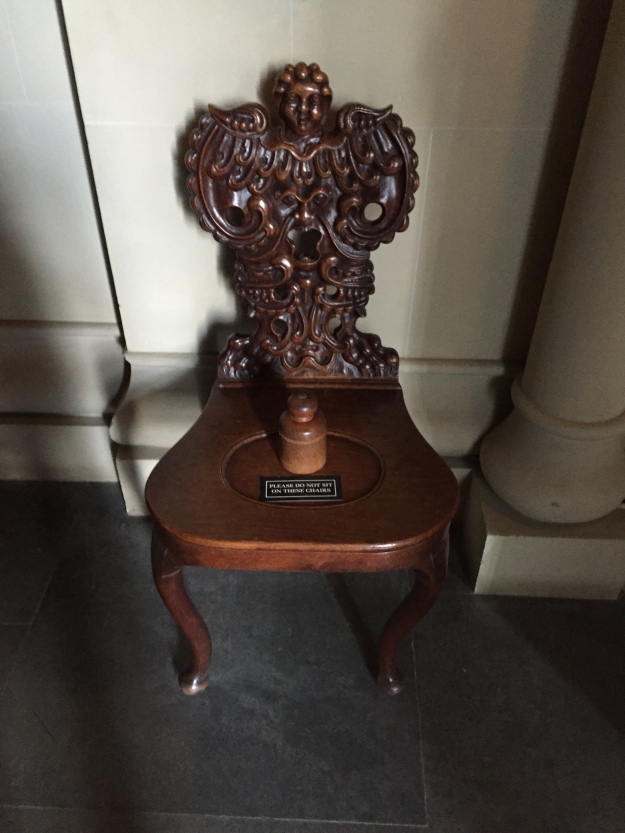 Hall chairs were often custom-made for grand homes, the style carefully considered to reflect the wealth and taste of the owner. The one above is from Penrhyn, an over-the-top 19th-century stone pile built to resemble a medieval Norman castle. It’s in North Wales, and in its heyday it was a favorite haunt of Bertie, Prince of Wales. 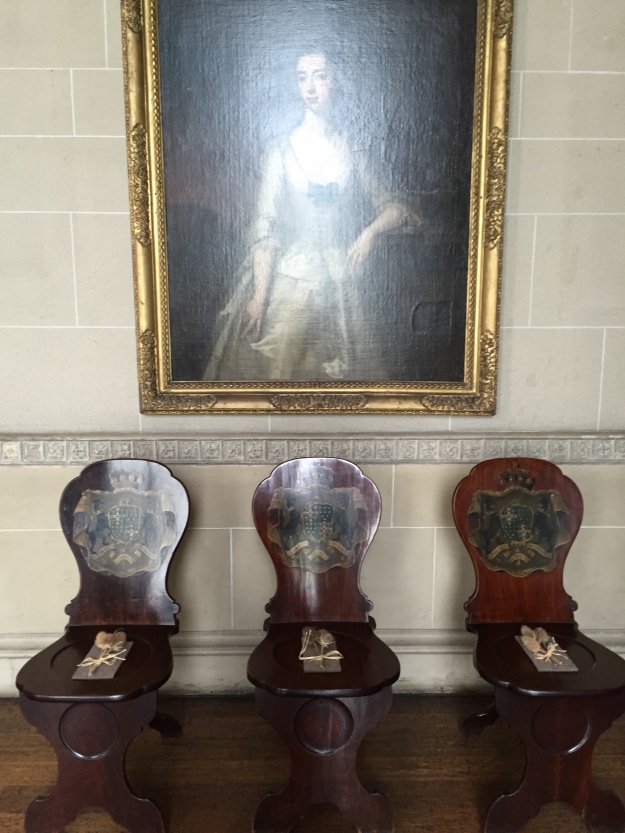 A hall chair can be steeped in history. This chair, at Nunnington Hall in Yorkshire, has the emblems of one of the many owners over the years. I’m not sure whose emblems they are. But the oldest part of the existing mansion was built by William Parr, the brother of Catherine Parr, the only one of Henry VIII’s six wives to outlive him. William lost his title and Nunnington in 1553 when he made the big mistake of plumping for Lady Jane Grey as Queen. After her nine days on the throne, he was convicted of treason and sentenced to death. But a pardon allowed him to keep his head. Eventually, Elizabeth I restored his title, but not his mansion or his hall chairs. 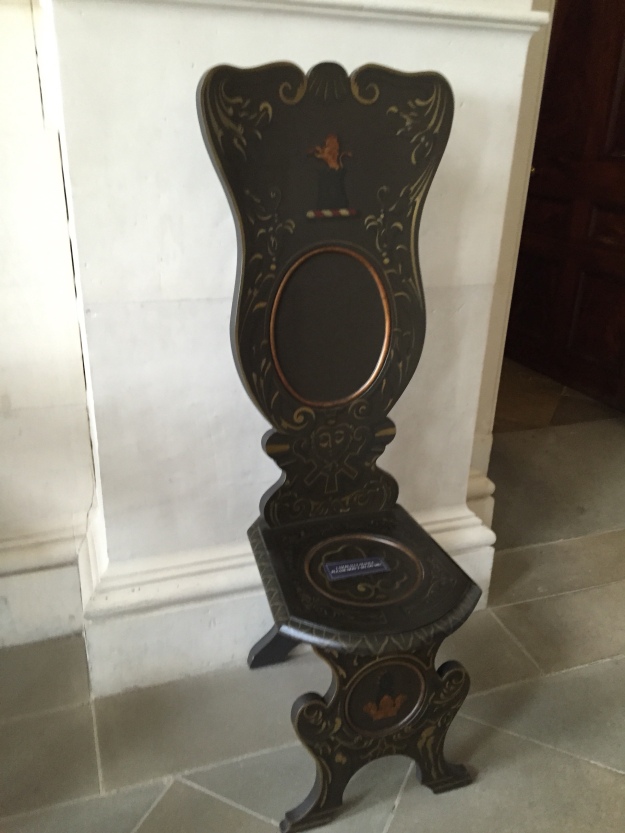 This chair, at Castle Howard in Yorkshire, looks like a spot to squirm in discomfort. But then comfort is not the point in hall chairs. They almost never have arms. This one barely has a seat.

Hall chairs are almost never padded or upholstered. A docent explained to me that a visitor relegated to a hall chair might have fleas. Hall chairs had to be easy to sanitize.

If you were lucky enough to be invited into a drawing room and dared to sit down, you might feel comfy on an upholstered chair, like one of these at Attingham. But if you were kept in the entry hall, you might have a long wait perched on a hard chair. I suspect that often a servant would be delegated to watch you as well, to be sure you didn’t make off with a silver candlestick. 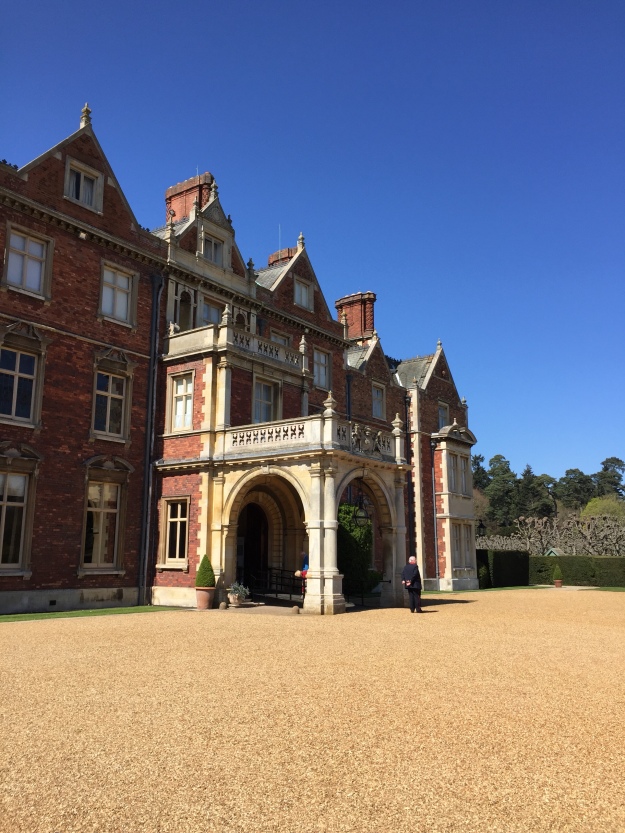 At Sandringham House, the private home of the Royal Family in Norfolk, paying visitors are welcome to see a few rooms when the Queen is not in residence.

Everybody enters through this door. But photographs inside are strictly forbidden.

It seemed all right to take a picture of one of the Queen’s very elegant hall chairs just inside. But I didn’t quite dare to sit down. 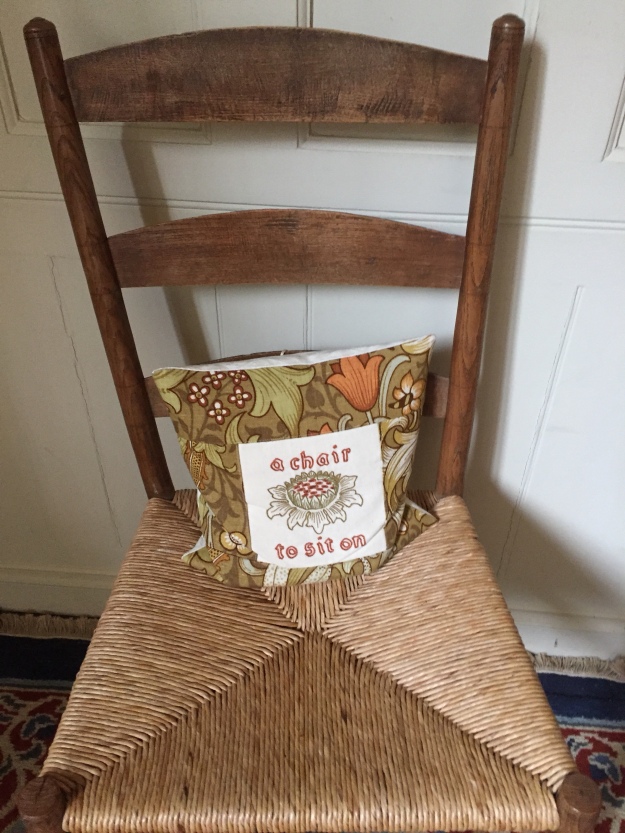 In refreshing contrast to aristocratic chair rules, stately and historic homes run by the National Trust often have special non-historic chairs set aside for weary visitors to take a load off. This one, at Standen near East Grinstead, even has an inviting pillow. Standen is entirely done up in William Morris style, which was all about beauty, comfort and practicality. Sit down? Thank you! I don’t mind if I do.