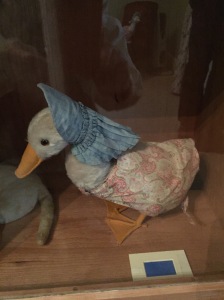 Beatrix Potter, born on this day in 1866, was a frequent guest at Melford Hall in Suffolk. One of her most beloved characters, Jemima Puddleduck, began life as a toy dressed by Beatrix and given to Richard Hyde Parker, a grandson of her cousin. 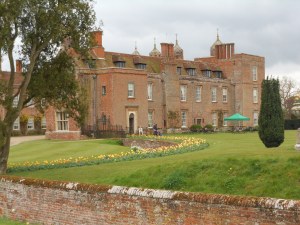 The house is now a National Trust property and a delight to visit. Beatrix was a cousin of Ethel Leech, who lived at the Hall with her husband, Reverend Sir William Hyde Parker. (Like many younger sons of the nobility, he had gone into the Church.  But the heir died unexpectedly and Sir WIlliam found himself a Baronet and the owner of a grand country home with a rich history).

Beatrix usually stayed in the West Bedroom, which had views over the garden and countryside. It’s an elegant high-ceilinged room. When she was a visitor, the room was a magnet for the children of the family.  Beatrix often brought along a collection of small animals, which she kept in the adjoining turret room.

The house has lots of mementos of “Cousin Beatie’s” time there.

One of the joys of wandering in British country houses is in finding connections with history, and especially with British authors.  Beatrix Potter is one of my favorites, and I was very happy to spend an afternoon walking in her footsteps.