In 1990, Robert Altman directed the movie Vincent and Theo, concerning the relationship between Vincent Van Gogh and his brother.  The fine actor Tim Roth plays Vincent.  The equally fine Paul Rhys plays his brother Theo. It was originally made as a 4-hour BBC mini-series, which the director Altman compressed into a feature film. Rolling Stone called the Altman movie “a masterpiece.” But then, lots of Altman films are known as masterpieces.

The film brilliantly evokes the times in Paris and in the south of France.  There is nothing very picturesque about poverty in either place.  Vincent’s brave attempts to create a stable life for himself are heartbreaking.

In 1888, during his troubled time with his painter friend Paul Gaugin in Arles, van Gogh painted his mother’s garden at Etten from memory.  I don’t know whether I’ll ever see the original; it’s at the Hermitage in St. Petersburg.  It’s a stunning painting.  Vincent wrote about it to Theo:  “A reminiscence of our garden at Etten with cabbages, cypresses, dahlias and figures…Gaugin gives me courage to imagine and the things of the imagination do indeed take on a more mysterious character.” Which of the figures is van Gogh’s mother?  One of the sad-looking figures in the foreground?  Or the woman bent over her garden in humble hard work?  Maybe they all represent his mother, or his childhood, in some way.  I think this painting would have had deep meaning for the brothers who shared so much.

Having recently visited the Van Gogh Museum in Amsterdam, I gave the film another look.  I have always thought of Theo as the long-suffering, conventional patron of his tortured genius brother.  In the film, interestingly, Theo comes across as equally troubled.  In fact, he sometimes seems more tortured than VIncent.  At least Vincent always has his single-minded determination to paint.  Theo has self-doubts.  Why is he stuck working in art galleries?  Why can’t he afford to get married?  Finally he does marry, in spite of suffering from syphilis.  Then he has a wife and colicky baby to add to his troubles. 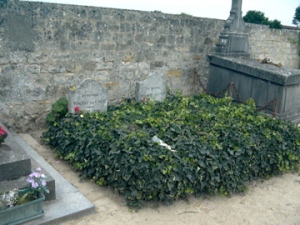 Theo was always in frail health.  In fact, he died just a few months after VIncent’s death.  The brothers are buried side by side in Auvers. When I visited, a few years ago, the cemetery adjoined a cornfield that could have come straight out of a van Gogh painting. The same ivy vine intertwines and covers the graves of the two brothers. It’s a lonely trek to see the graves; this is not a major tourist attraction. The brothers’ relationship, troubled as it was, gave us the gift of Vincent’s paintings, which always attract clumps of viewers in museums lucky enough to own them. Vincent could not have painted his masterpieces without the love and support of his brother Theo.

I wrote about Vincent’s mother and their loving relationship in a previous post at  https://castlesandcoffeehouses.com/2015/05/09/thanks-for-eve…m-love-vincent/ ‎