My new favorite City Hall is in Copenhagen.

Why do I even have a favorite City Hall? In most cities, it’s about the last place I’d care to visit. I remember a long-ago trip to Winnipeg, Canada, when I spent several frustrating hours in the City Hall dealing with a fender-bender. (The only consolation was that I got to see an actual Canadian Mountie in his spiffy red jacket).

But Scandinavian countries like Denmark are proudly secular societies. City Hall is front and center in people’s lives, much as cathedrals are in other cities.

Martin Nyrop designed the building in National Romantic Style. To me, it looks distinctly Jugendstihl, Art Nouveau, or Arts and Crafts. This is not surprising for a building inaugurated in 1905, the heyday of these artistic movements. In Denmark, the movement was called “Skonvirke,” meaning “aesthetic work.” 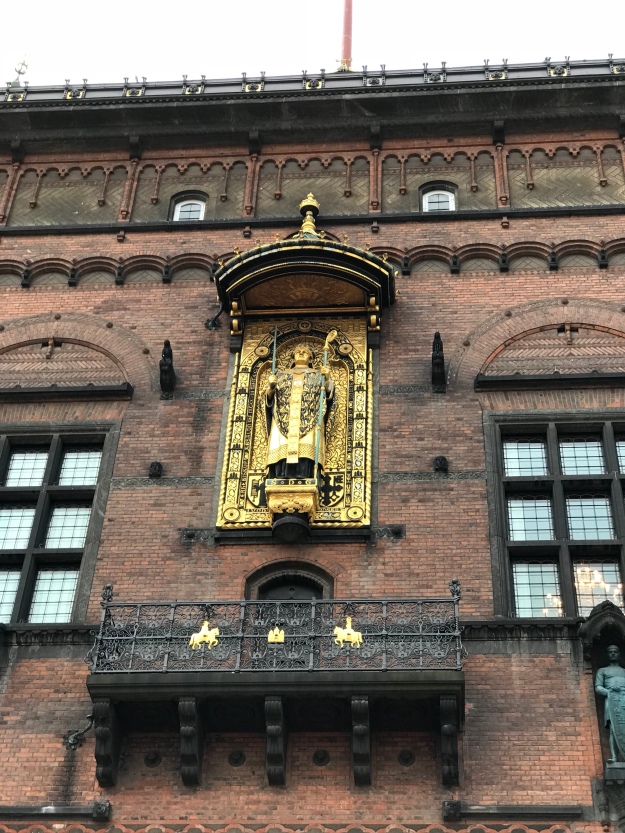 A gilded statue of Absalon stands grandly above the main entrance. Absalon (also known, maybe to his buddies, as Axel) lived from 1128 to 1201. He was a warrior, politician, and archbishop–a Renaissance man before there was a Renaissance. He conquered pirates who plagued early Denmark, expanded its territories, built the first fortifications of what is now Copenhagen, and began untangling Denmark from the Holy Roman Empire. I don’t know whether he was also a kingmaker, but King Valdemar I leaned on him for counsel. 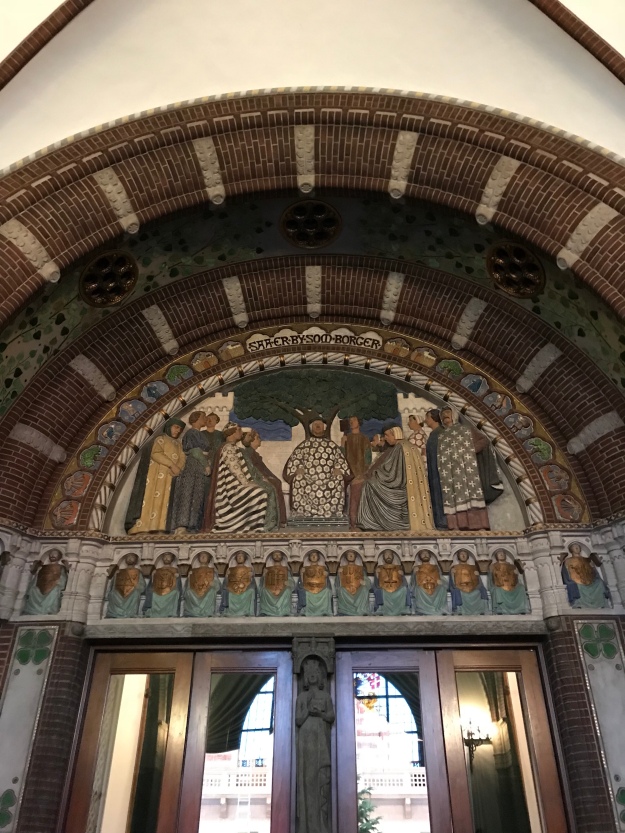 Just inside the main entrance, I think Absalon is dispensing good advice. (Or maybe this is the king–I couldn’t find any information and there was no tour going on).

In early December, the great central hall was being set up for an event. Another time I visited, there was a fascinating exhibit about immigrants to Denmark. (I wouldn’t mind emigrating to Denmark myself). 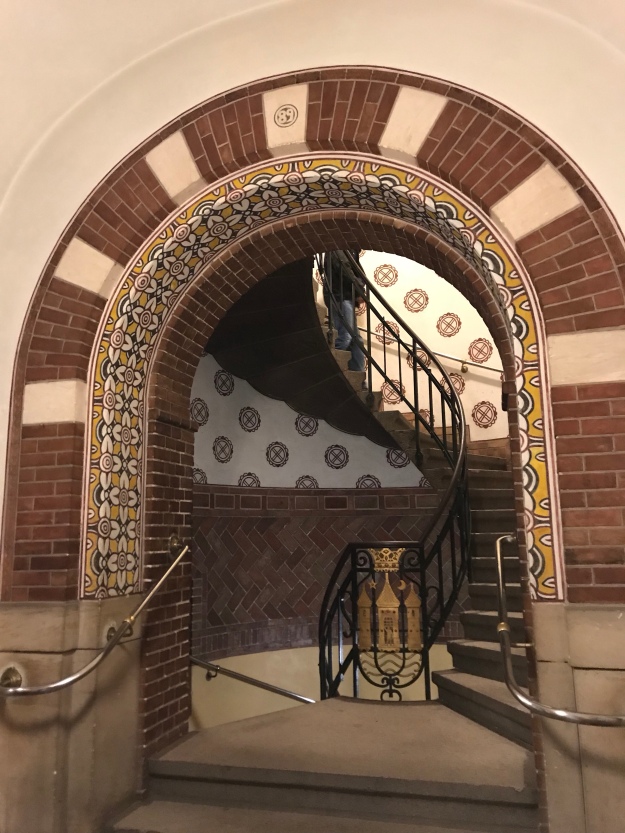 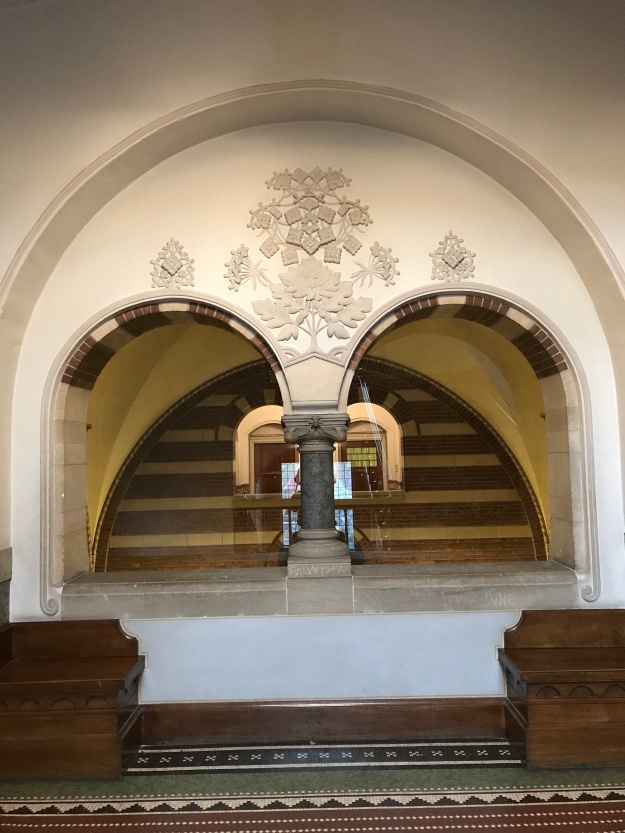 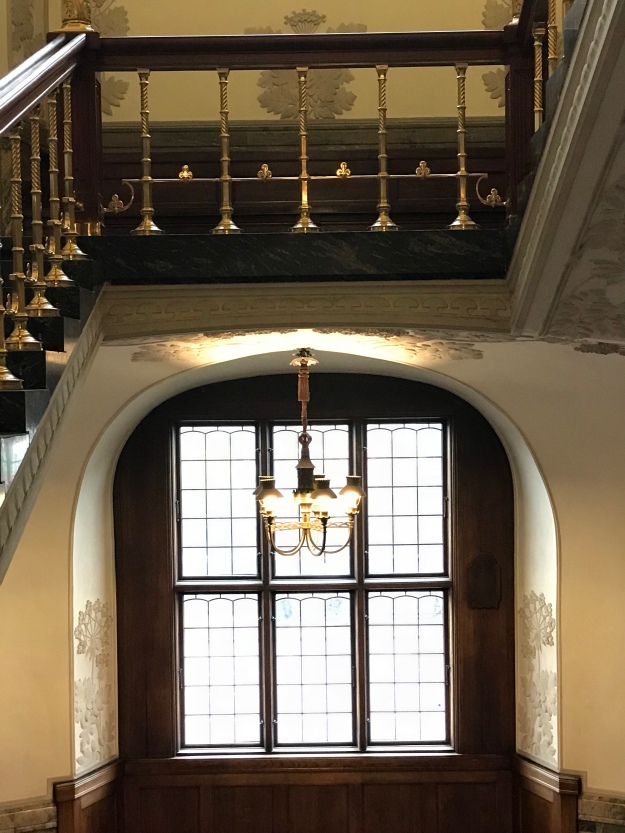 Inside on a weekday, city workers walk up and down beautiful staircases and go calmly about their business in hushed corridors. 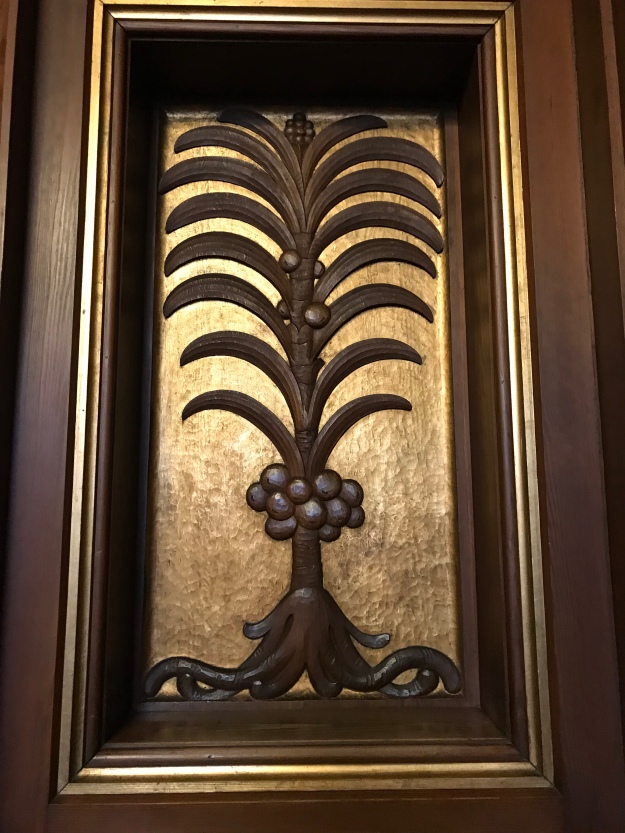 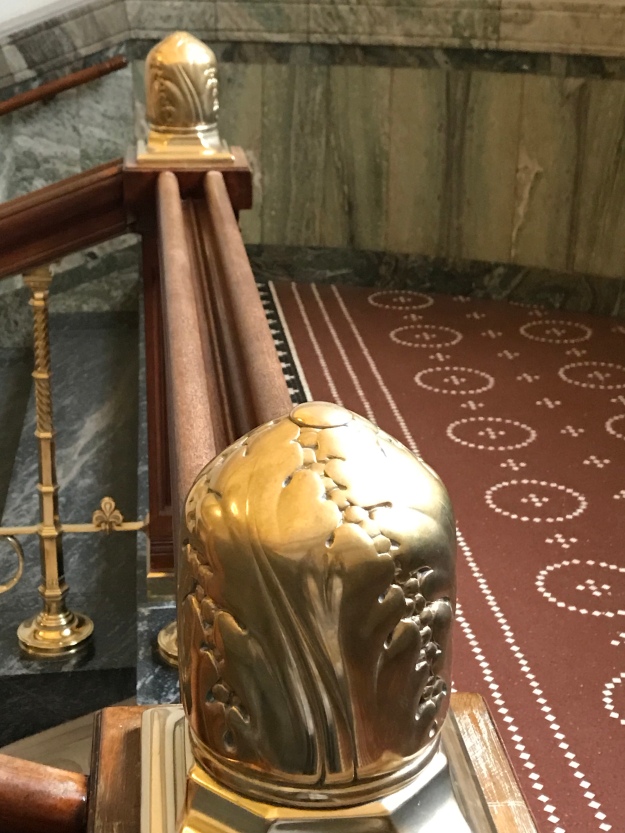 Visitors are free to wander, taking in the beauty everywhere. 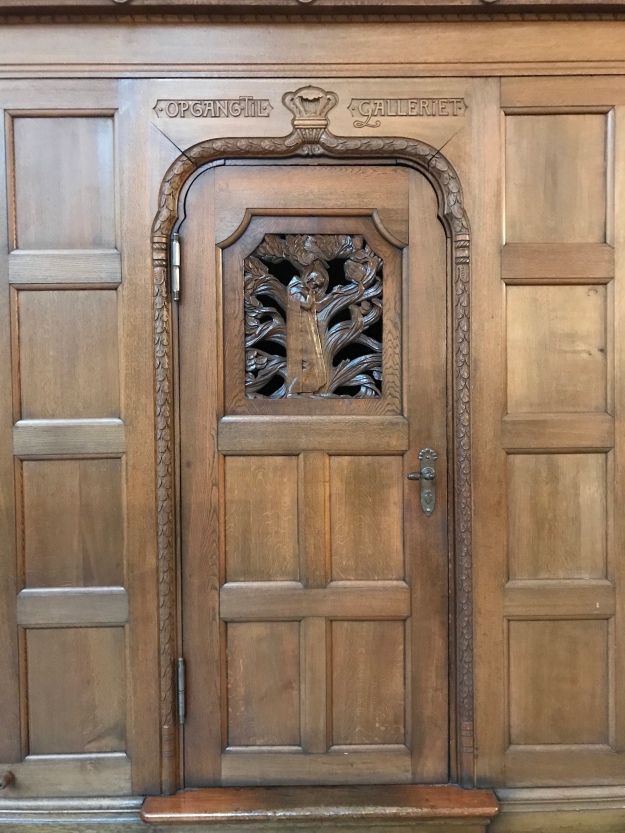 Some doorways are carved and fitted with elegant hardware. 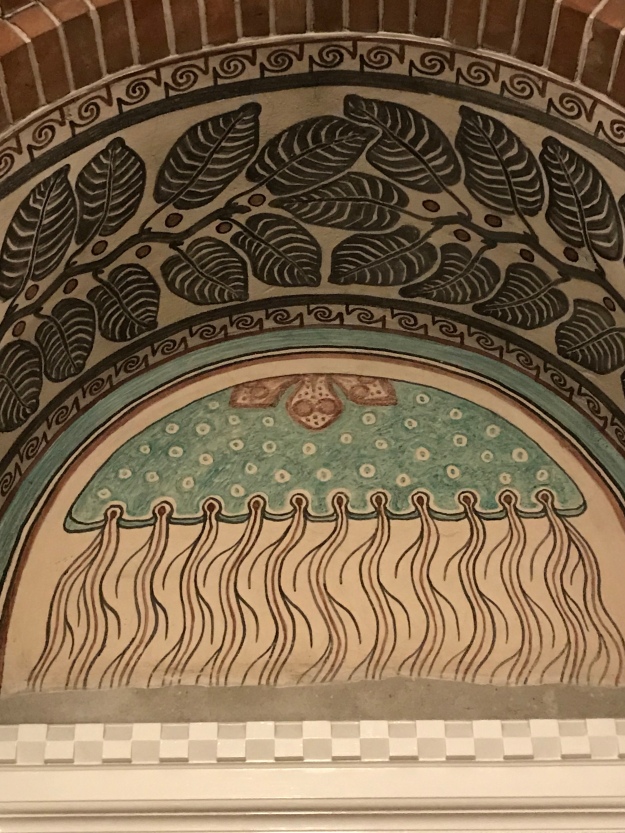 All the other doorways have colorful painted decoration. No two are the same.

Even a janitor’s hallway slop sink is a thing of beauty. 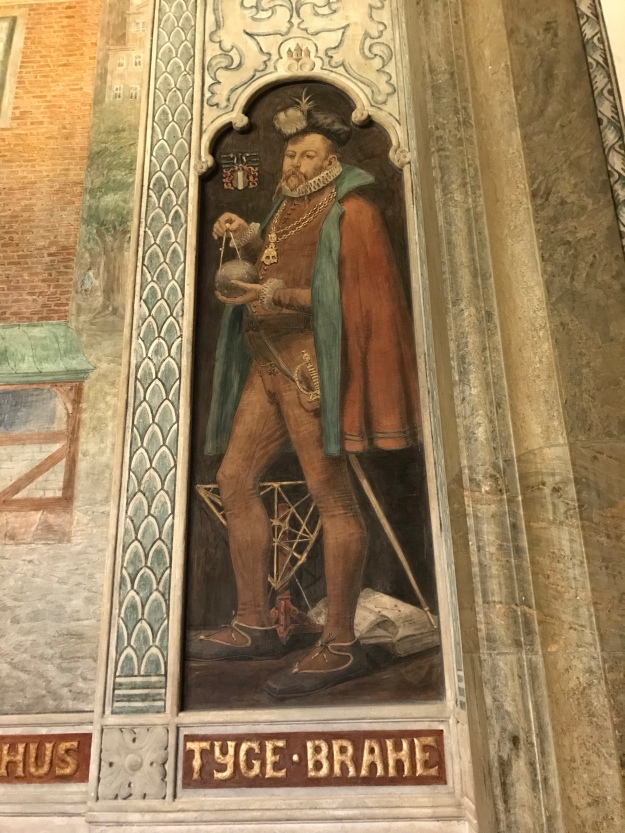 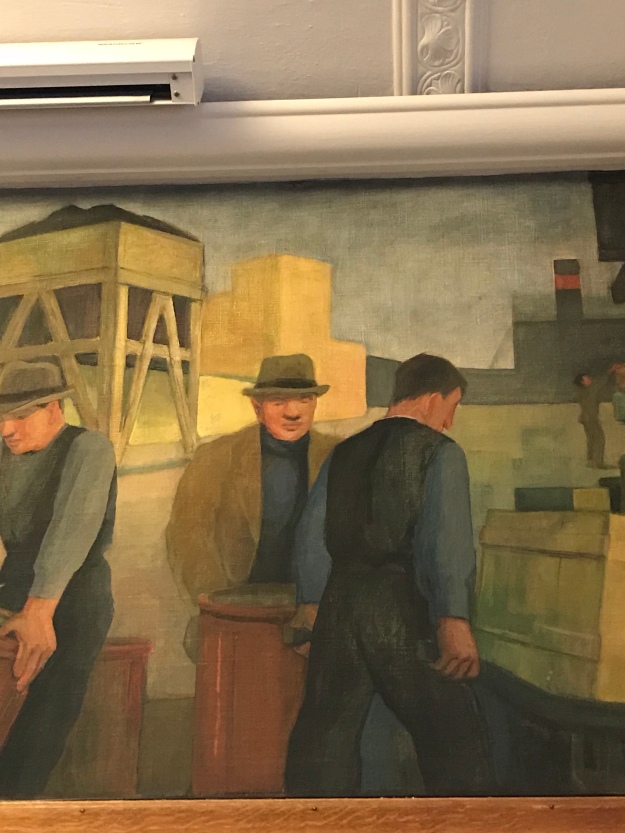 The great and good are featured in murals, but so are working people. Tycho Brahe, above, lived from 1546 to 1601. He was a Danish nobleman and a great astronomer, but in this most egalitarian country, machinists and laborers are also honored. 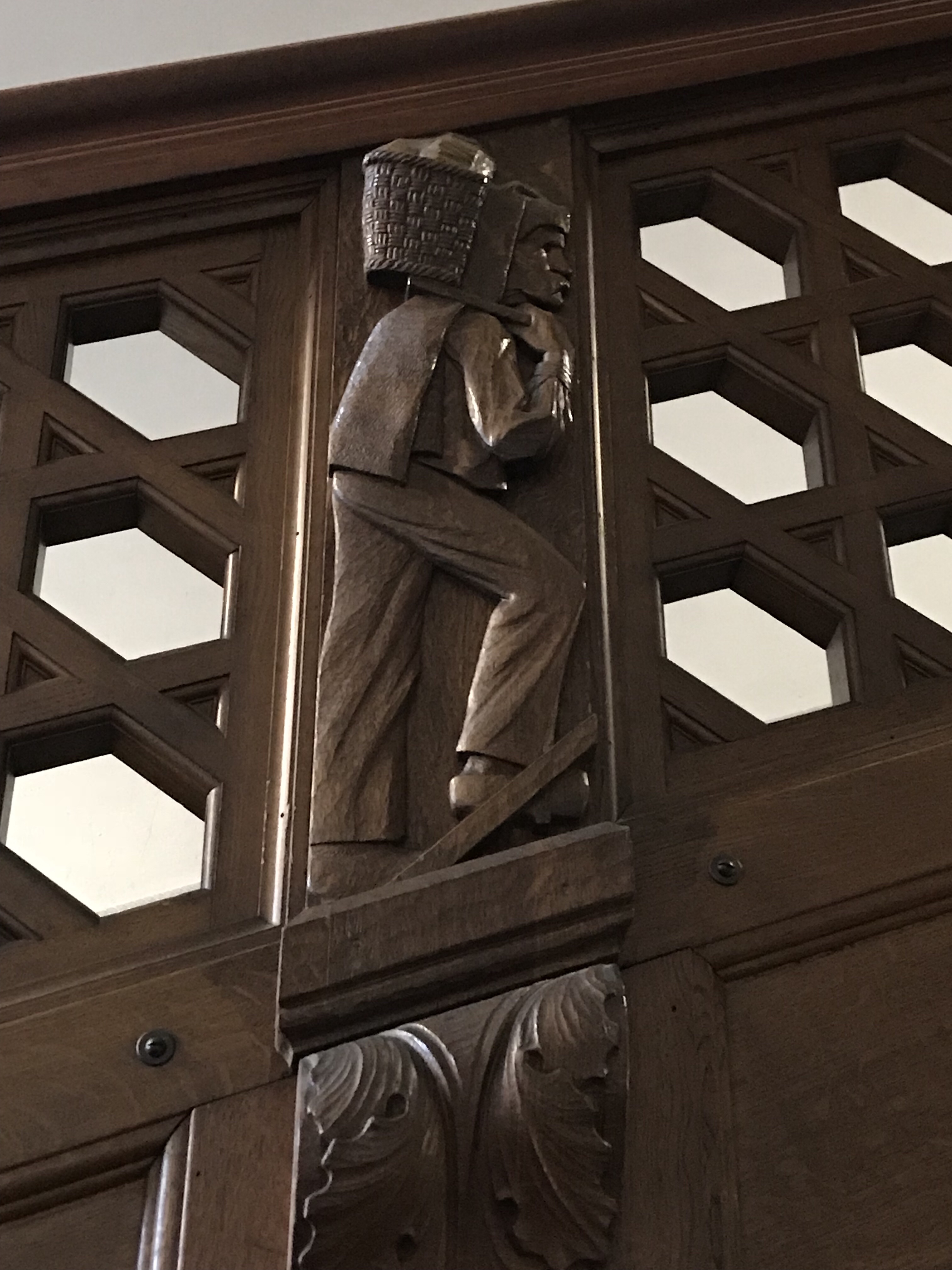 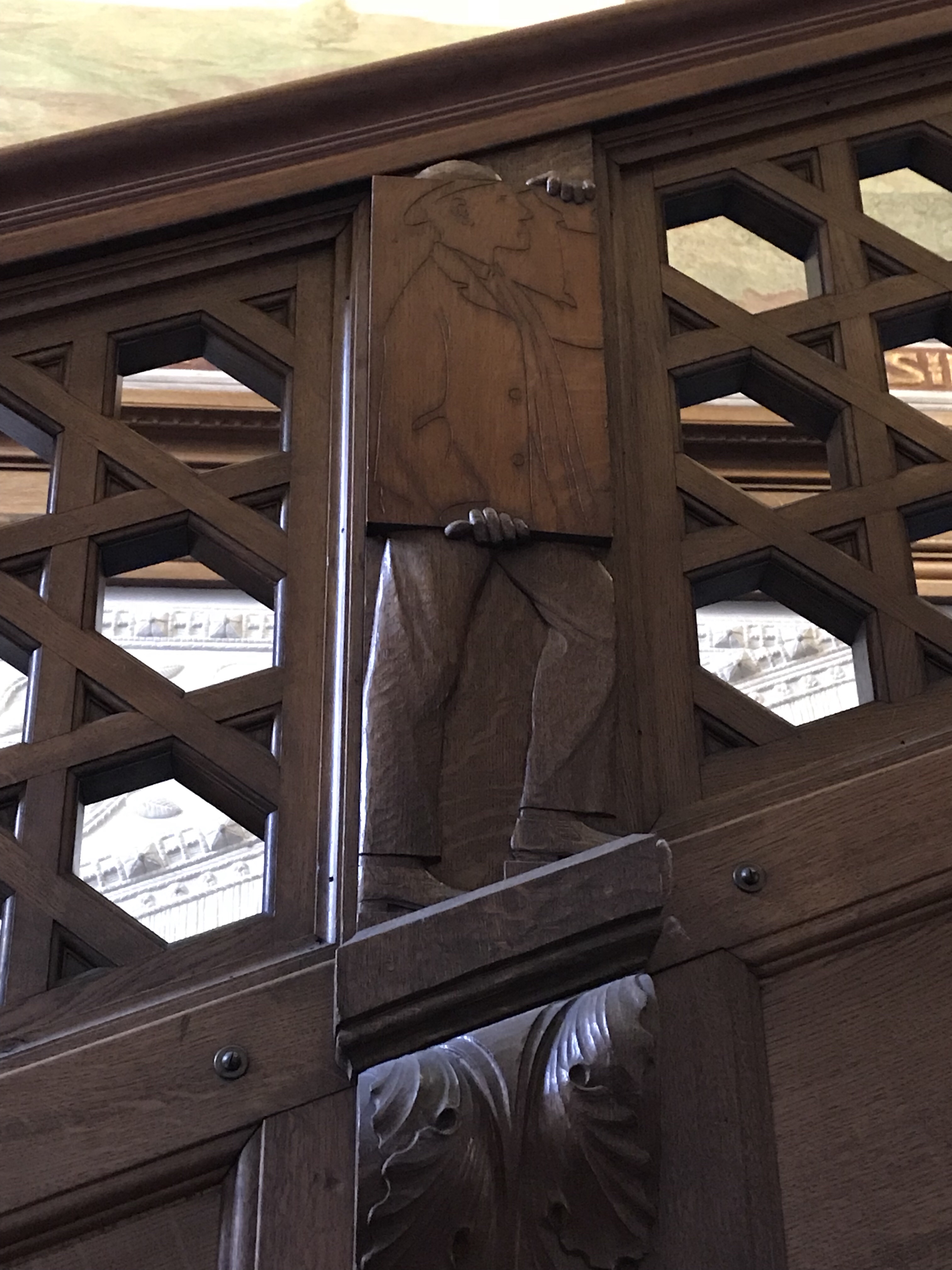 Carved workmen trudge up a staircase. I especially like the man carrying a sheet of glass for a window. 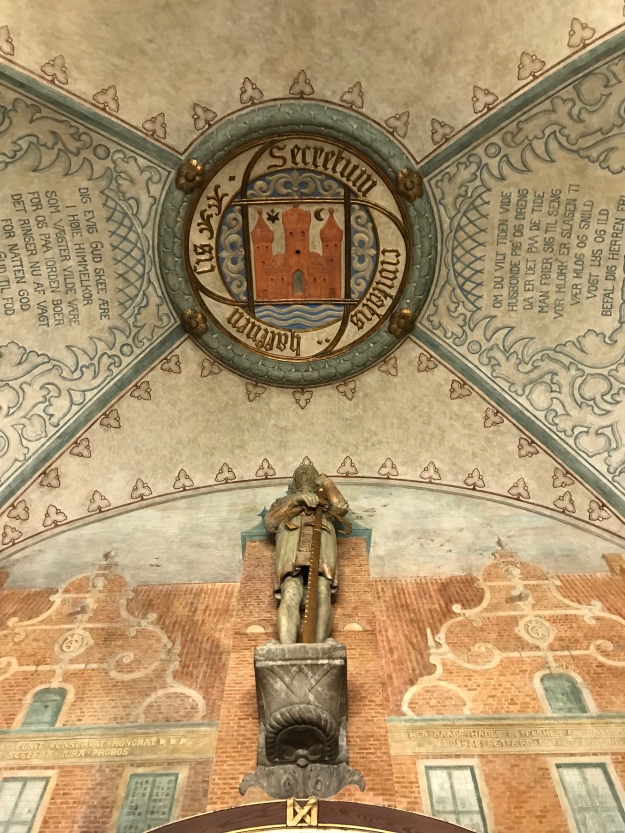 Other spaces are more grand, with murals and ceilings celebrating Copenhagen’s history.

An owl stands at the doorway to the city archives. I have a feeling that important papers don’t get lost here in this most civilized City Hall. It’s no wonder that Denmark’s citizens line up at their beautiful City Hall every Saturday to celebrate their weddings. More on that on Valentine’s Day!