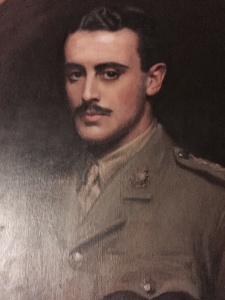 Eustace Lyle Gibbs, born March 10, 1885, was the second youngest son of Antony Gibbs. He was educated at Eton and Magdalen College, Oxford. Then, as expected of him, he joined the family shipping business.

Eustace was already a member of the North Somerset Yeomanry.  When World War I broke out on July 28, 1914, he was among the first British troops sent to France. Wealth and rank did not exempt men from serving; in fact, those of high rank mostly felt even more obligation to fight than those less fortunate. They generally entered the war as officers. 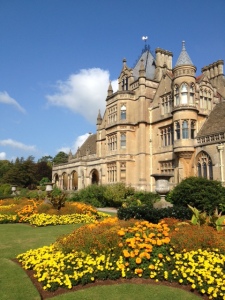 Eustace had a short home leave in December 1914. While visiting his family at their beautiful Victorian country house, Tyntesfield, he gave an interview to the Western Daily Press. Asked how people at home could help soldiers at the front, he said the troops always needed gloves and socks.  And they really missed chocolate. When he returned to the front, he brought donations of these items with him, and handed them out to the men of his “B” Company, British Expeditionary Force. 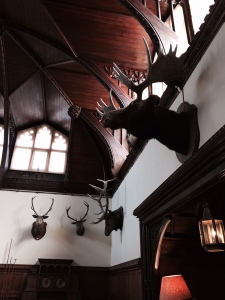 During his leave, Eustace no doubt spent time in the Billiard Room at Tyntesfield, a wonderfully masculine space designed for the men in the family. Eustace would never see his home again.

Eustace died on February 11, 1915 of wounds received fighting near Ypres. He was 29 years old. His portrait was painted in 1916 from a photograph of him in his uniform. The artist was Albert Henry Collings. 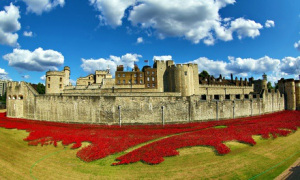 1915 was the 100th anniversary of the beginning of the Great War. I wrote about the spectacular display of close to a million ceramic poppies in honor of fallen British soldiers at the Tower of London. The The photo above is from The Guardian at http://www.theguardian.com/world/2014/sep/01/tower-of-londons-ww1-remembrance-installation-share-your-photos-and-videos. The post is at https://castlesandcoffeehouses.com/2014/09/26/remembrance-of-wars-past/. 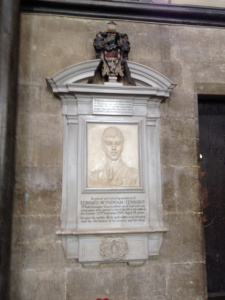 That post also remembers another aristocratic young man who gave his life for his country, Edward Wyndham Tennant.  He died at age 19 in the Battle of the Somme, 1916. On the plaque above his marble relief portrait, a fellow soldier describes the young man’s leadership:  “When things were at their worst he would go up and down in the trenches cheering the men; when danger was greatest his smile was loveliest.” His grieving parents commissioned the touching memorial to him in Salisbury Cathedral.

Fighting in the Great War ended “at the eleventh hour of the eleventh day of the eleventh month” of 1918.  Virtually every town and village in Britain (and also in other countries like France) lost young men to the carnage of the First World War. About 20 million people lost their lives. On Armistice Day, in England and in other places, there are ceremonies honoring the fallen.

Americans actively entered the war in its last few months, after supporting the Allied side indirectly. No one knows exact numbers, but about 110,000 Americans lost their lives in the fighting. In the United States, November 11 is Veterans’ Day, when all who have served their country in the military are honored. Today, women serve as often as men do. And as in times past, whole families and communities feel the effects of loved ones marching off to serve. We need to salute them all.

When I visited Strasbourg Cathedral a couple of months ago, I was touched to see a memorial to American soldiers who had helped to liberate Alsace and its capital, Strasbourg, from Nazi control. 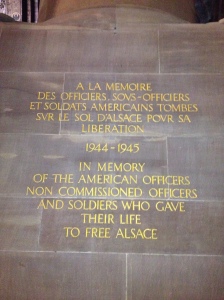 Strasbourg is just across the Rhine from Germany, and had been in dispute between the Germans and the French ever since the Franco-Prussian War of 1870-71.  I know next to nothing about that war, but I do know that Strasbourg had great symbolic importance for the Free French, led by Charles de Gaulle from exile in England.  He insisted that only French soldiers should liberate Strasbourg, and so it was.  Strasbourg and its Cathedral had enough symbolic importance that Hitler himself had visited in 1940.  Hitler declared that he intended the Cathedral to be a place of sanctuary for the German people, or possibly a memorial to the Unknown Soldier. But in the closing days of the war, while the Allies moved across France from Normandy toward Germany, French forces were assigned to recapture Strasbourg and above all to liberate the beloved Cathedral.  Liberation took place on November 22, 1944.

The day we celebrate as Veterans’ Day is known as Remembrance Day or Armistice Day in many countries.  It actually marks the end of World War I, which everyone hoped would be “the war to end all wars.”  Sadly, it was not.  But the guns of World War I fell silent at the 11th hour of the 11th day of the 11th month of 1918. The next year, the day was designated to honor veterans of all wars. 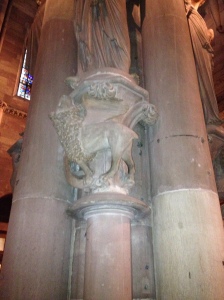 In the Cathedral, columns are still pocked with bullet holes.  Was there actually a battle inside?  I don’t know.  The fighting was certainly fierce.  But possibly the damage was more from the bombs that hit the Cathedral in August of 1944.

Yesterday in church, veterans were asked to stand and be recognized.  In our congregation, there were about a dozen veterans, all white-haired.  Then members were asked to call out the names of veterans they wanted to remember.  Names were spoken from all corners of the church.  Some of the voices were young and strong.  Some were old and quavering.  The people named could have filled the place by themselves. All those named had served their country with honor.

We might not all agree on the wisdom of sending American troops to the many places across the globe where they have been deployed.  But we can agree that we all owe a debt of gratitude to those who are willing to serve their country. I think we can spare some sympathy for the men and women of other countries who have been drawn into war, too. Service people are committed to dangers other than war, too. As I write, I’m sure that American service people are among those rushing to provide aid after the catastrophic typhoon that just hit the Phillippines.

Join me next time for more explorations into the art and history of Europe.