Today, November 1, is All Saints’ Day, when the Christian calendar honors the departed, saintly and otherwise. After the rollicking party atmosphere of the American “Halloween,” when everyone pretends to be scary and scared, I thought of something truly scary (at least to me).  Last spring I saw the “cadaver tomb” of Archbishop Henry Chichele, who died on the 12th of April, 1443. But the Archbishop had been contemplating his own death for many years. He had his own tomb built many years before he died.  It’s elaborate and colorful, but still it’s the very opposite of vain.

Under the brightly painted effigy of the Archbishop dressed in his finery and clasping his hands in everlasting prayer, there’s another effigy.  The lower effigy shows the good Archbishop as a decaying corpse, naked and bony. 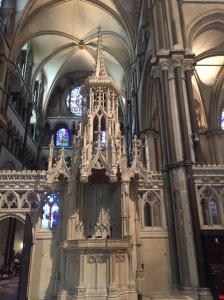 The archbishop not only paid for this jarring reminder of his own mortality, he forced himself to contemplate it often.  The tomb where he would someday be buried was directly opposite his ornate Gothic pulpit. The inscription reads, “I was pauper-born, then to primate raised.  Now I am cut down and served up for worms. Behold my grave.”  If that isn’t scary, I don’t know what is. But the Archbishop’s intent was to be ever-aware of the brevity of life. 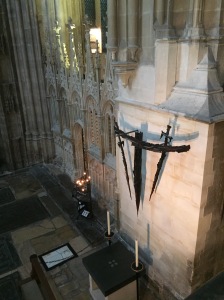 Henry is just one of many historical figures honored in Canterbury Cathedral. Another is Archbishop Thomas a Becket, murdered at the direction of King Henry II in 1170.  The exact spot where assassins surprised him at prayer is still a much-visited place of pilgrimage. Above the small altar, there’s a menacing modern sculpture of the weapons that left Thomas bleeding onto the cathedral stones. Unfortunately, King Henry VIII ordered Thomas’s tomb destroyed during the Dissolution of the Monasteries.  (I didn’t realize Henry VIII had done this particular deed.  He has a lot to answer for). Today, the approximate burial place of the sainted Thomas is underneath a dark, empty chapel decorated only with a single candle left burning. 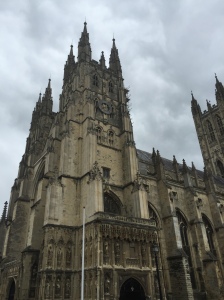 Canterbury Cathedral, dating back at least as far as St. Augustine in 576, is one of the most interesting of all the many churches in England. I was lucky enough to attend Evensong in this ancient place of worship and history. I’d love to return.