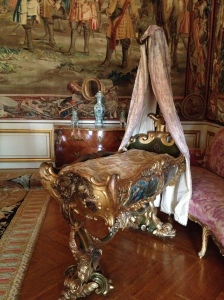 When Consuelo Vanderbilt did her duty and produced the required “heir and a spare” for the 9th Duke of Marlborough, she rocked her boys in a regal cradle, which is still on view at Blenheim Palace.   Consuelo’s mother, the irrepressible Alva Vanderbilt, wasted no time in ordering this cradle from Italy.  She had moved heaven and earth to marry her very rich daughter to the Duke of Marlborough.  The birth of a male heir insured that the Vanderbilt bloodline would forever have a secure footing in the British aristocracy.

According to a placard about the cradle in Blenheim Palace, it was a near-replica of the one made for Napoleon Bonaparte’s long-awaited heir in 1811. I don’t see much resemblance, though. Consuelo’s cradle is ornate, over-the-top with fanciful figures and gilding. (Actually, a baby being rocked in this cradle would have gone straight over the top and onto the floor–the mattress is even with the sides. If Consuelo actually used it, she must have used it with a lower mattress). 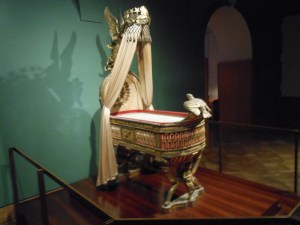 Napoleon II’s cradle is now in the Imperial Treasury in Vienna, because the child’s mother was Napoleon’s second wife, Marie-Louise of Austria. It was never actually subjected to a burping, crying child.  It was a ceremonial object–a “throne cradle”– presented to Empress Marie Louise by the City of Paris. This cradle has a distinctly military look. It was fashioned of 280 kg of silver, replete with symbols of power and good government:  horns of plenty, the Roman Capitoline Wolf, a laurel wreath, a crown of stars, and numerous bees. Napoleon the Emperor took the bee as his personal emblem; it was also an old symbol of Paris, indicating diligence. The foot of the cradle has a small eagle; Napoleon II was popularly known as “The Eaglet,” with the hope that he would surpass even the glorious exploits of his father.

Napoleon’s only legitimate son had a short and tragic life.  The Emperor made his son the King of Rome the instant he was born.  Glory did not follow, though. After his father’s abdication in 1814, Napoleon II’s mother was forced to flee home to Austria with her toddler.  She remained married to Napoleon, but never saw him again.  The child died in isolation in Austria, where he had to be kept from the public for fear of his father’s admirers trying to rally around him.  I read somewhere that the unfortunate child’s only companion was a pet bird.  He was a frail, sickly child, kept indoors almost all the time. He died of tuberculosis at age 21. 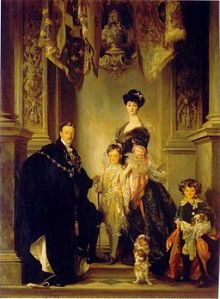 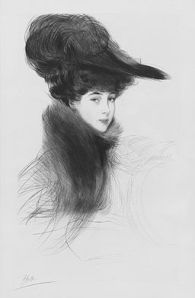 Julian Fellowes, creator of the television hit Downton Abbey, did not invent the story of an American heiress bringing her fortune to the rescue of an aristocratic British family of declining fortunes. Fortune-hunting Brits, titled but poor, regularly patrolled the upper reaches of American society for rich brides.  Consuelo Vanderbilt was one of those real-life brides. She became the very reluctant wife of the 9th Duke of Marlborough.

By all accounts, Consuelo was one of the loveliest and most charming women of her age. The playwright Sir James Barrie, author of Peter Pan, famously wrote, “I would wait all night in the rain, to see Consuelo Marlborough get into her carriage.” She was also sweet, compliant, and dominated by her mother Alva Vanderbilt.

Alva was formidable.  She was estranged from her husband, the fabulously rich railroad man who, among other feats, created Madison Square Garden.  He was a grandson of the dynasty’s founder, Cornelius “The Commodore” Vanderbilt, and inherited the equivalent of about $1.4 billion in today’s money. Alva divorced him for adultery and landed a settlement of the equivalent of $280 million in today’s money.  Alva named her daughter after her godmother, a half-Cuban American socialite who had made a spectacular marriage into the family of the Duke of Manchester.

Alva expected no less of her beautiful daughter Consuelo. She forced Consuelo into a brilliant but doomed marriage with the 9th Duke, who didn’t want the marriage any more than Consuelo did. Alva actually placed her daughter under house arrest in her bedroom, keeping her away from the man she loved, until the tearful teenager finally agreed to marry the Duke of Marlborough.  Consuelo wept behind her wedding veil at the 1895 ceremony in New York. She was just 18 at the time. The Duke wasted no time in collecting her dowry, the equivalent of $67 million dollars, which he sorely needed to maintain the family seat at Blenheim Palace. The money lasted until around 1950, when declining fortunes forced the house to open to the paying public.

Consuelo did her duty, producing the required “heir and a spare.” By some accounts, she invented the famous expression. Predictably, the marriage ended in separation in 1906, divorce in 1921, and finally annullment in 1926, after Alva admitted that she had been wrong to force the marriage. Consuelo forgave her domineering mother and they developed a close relationship. 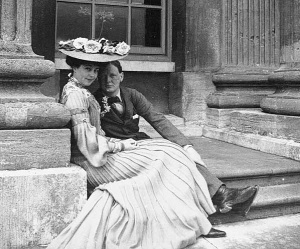 Consuelo became a close friend of Sir Winston Churchill, who was born at Blenheim in 1874 and remained a frequent visitor there all his life. While she was the Duchess, she worked to improve the lives of the poor around the estate and in the town of Woodstock.  It appears she was universally adored.  Later in life, she continued her good works, even as she took part in glittering society.  Her second marriage was happy, and she lived out her days in contentment. She died in New York at age 87.