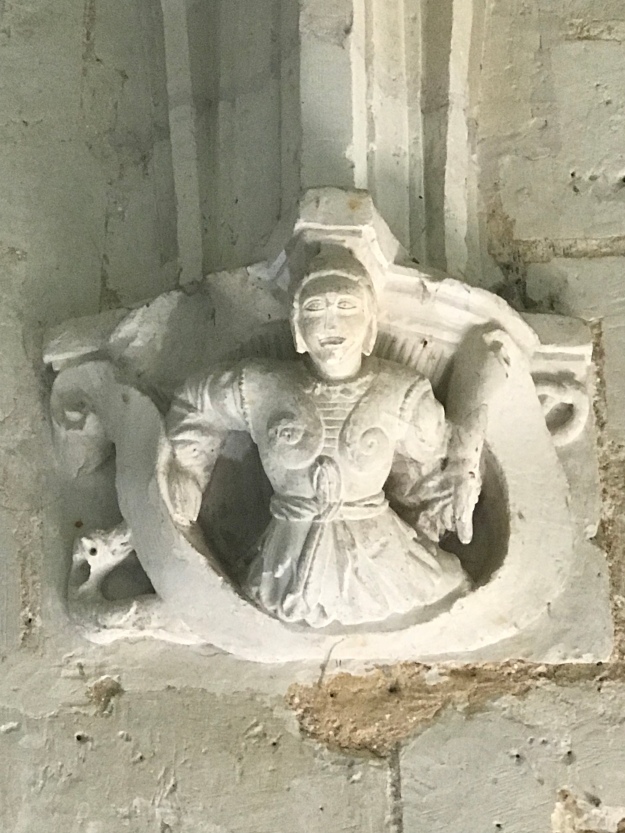 If I didn’t already believe in ghosts, I’d be positive they exist after visiting Fontevraud Abbey in France. I was looking forward to seeing it again on my last trip to France. I last saw it years ago, and expected it to be more developed for visitors now. It is, but not in a good way, at least not for me. 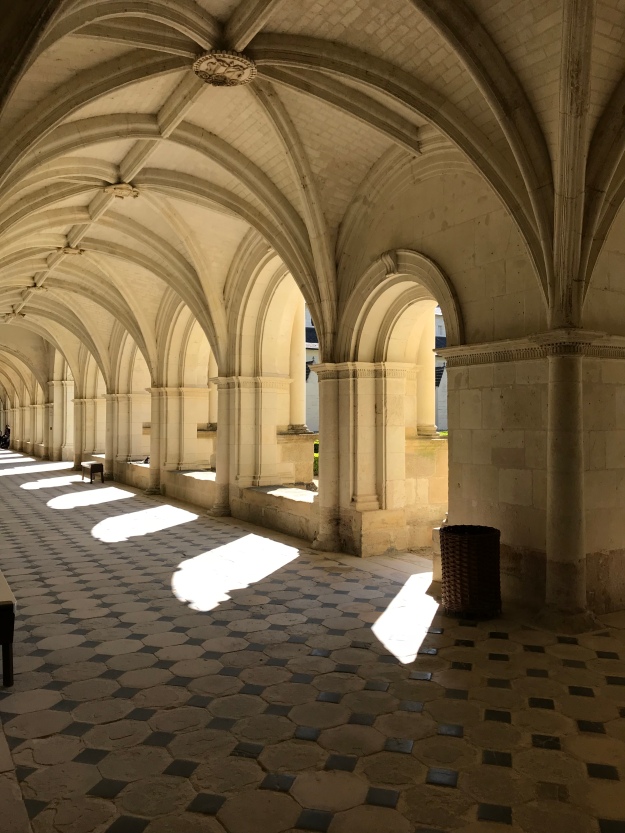 The Abbey was begun in the 1100s and for centuries was the home of generations of nuns. 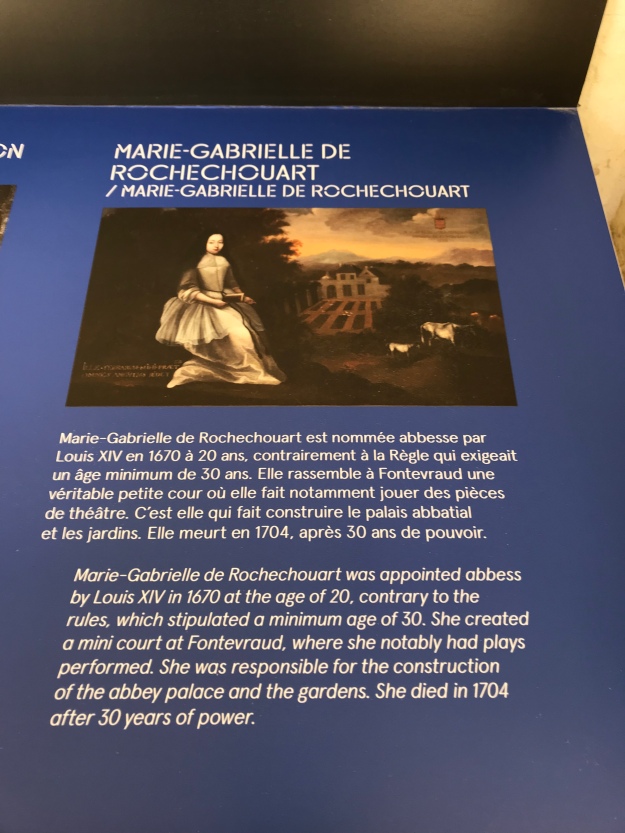 Many of them were noblewomen who either chose monastic life or retreated to the convent when they were widowed or retired from public life. Also, quite often women who were in disgrace were packed off to convents so that everybody else could feel better about them. An exhibit in the cloisters earnestly uses this fact to argue that monastic life was similar to prison life. Much is made of uniforms and hierarchies. I don’t buy the argument. 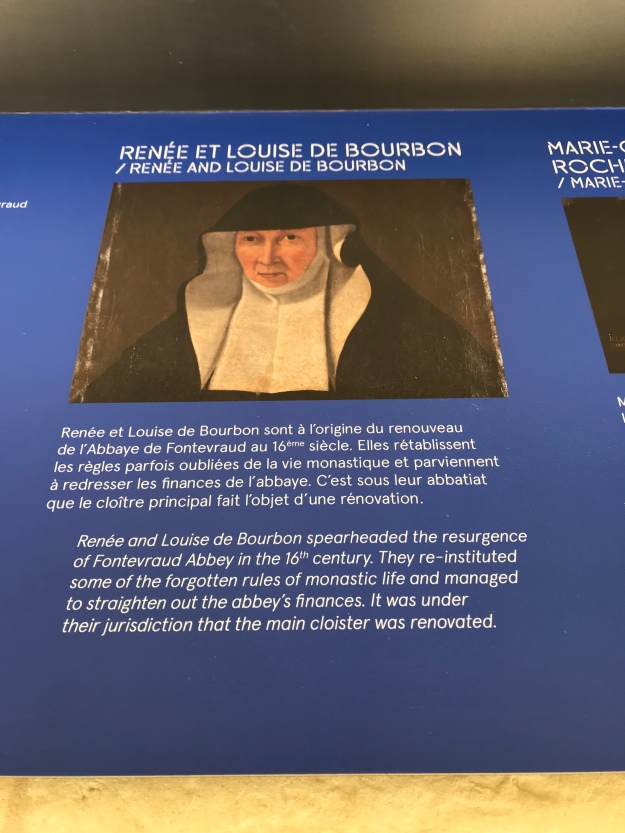 There were actually four different orders of religious people at Fontevraud, one of them made up of male monks under the authority of the nuns. Fontevraud was very unusual in that respect. It was set up as a kind of utopian community run by women. I’m all for that! But there’s very little information posted about the history of the Abbey. 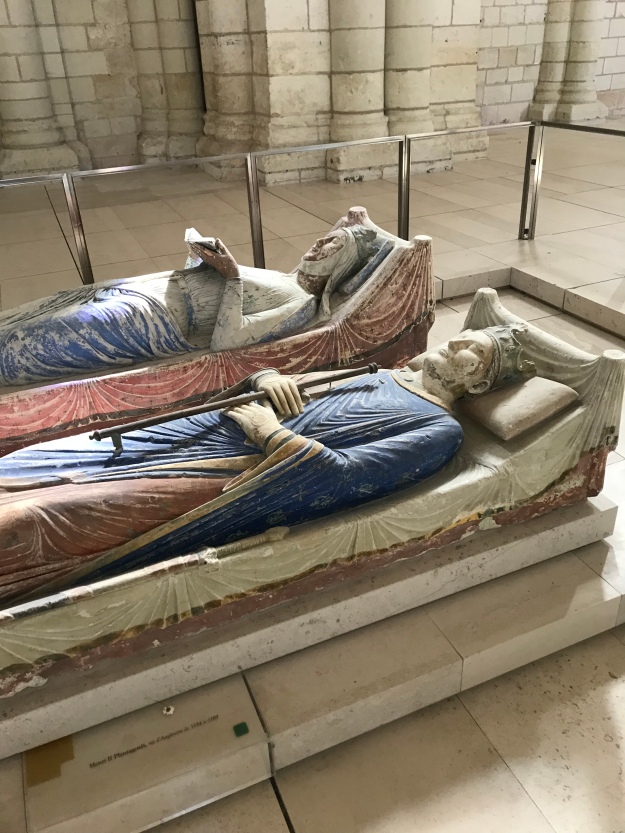 Eleanor of Aquitaine retreated to Fontevraud in her old age and died there. Eventually, her husband, Henry II of England, was buried alongside her in Fontevraud Abbey. Life in the convent was dignified and refined. Eleanor’s effigy shows her peacefully reading a book, probably Scripture (but I like to think it was something racy). 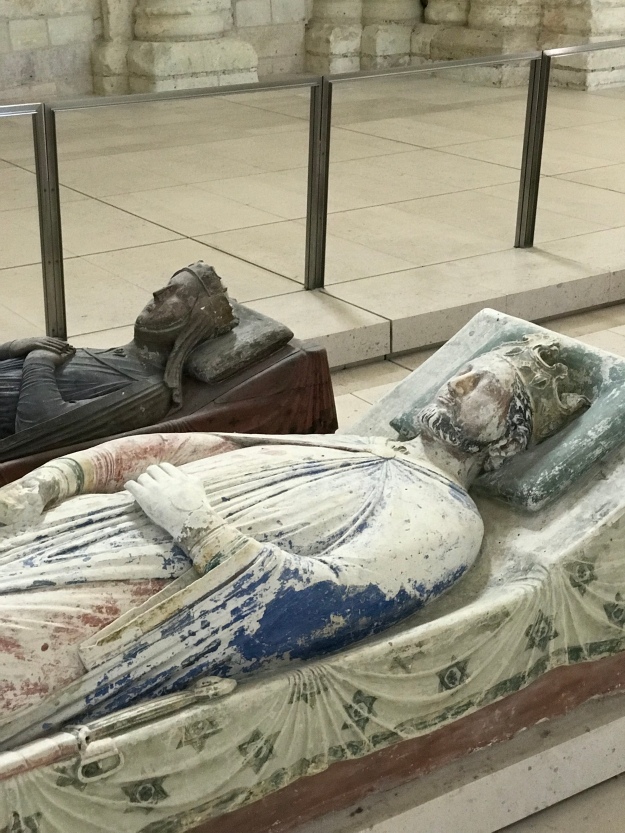 Eleanor and Henry’s son, King Richard the Lionheart, was buried in the same place, along with his sister-in-law Isabelle of Angoulême. Life went on placidly in the convent for centuries. 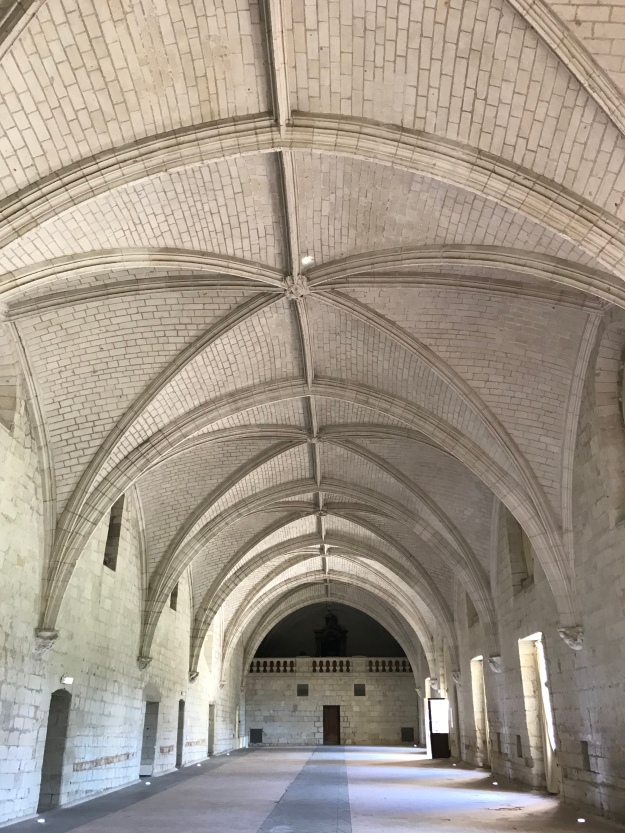 Then came the French Revolution. The Abbey was deconsecrated and the nuns were unceremoniously turned out.

Sacred images were smashed. Treasures were hauled off. Gold crosses were melted down. Only a few religious images remained, high up on walls.

Then in 1804, after all that was over, Napoleon Bonaparte ordered the creation of a high-security prison which soon held as many as 2000 unfortunate men at a time. (I think the prisoners were all men). It became one of the harshest prisons in France, and remained so for over 150 years. The cavernous spaces were filled with cells and workrooms. 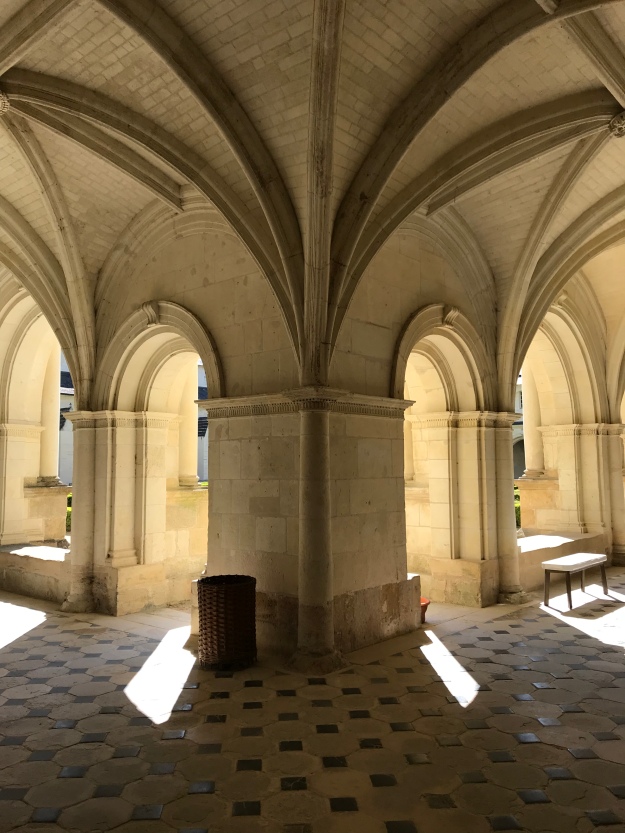 Guards patrolled the cloisters where generations of nuns once walked. 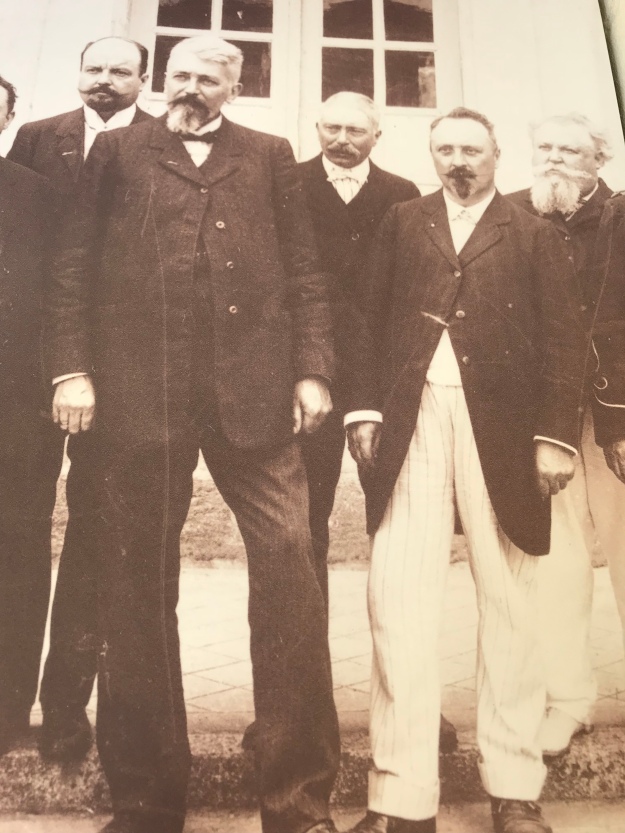 Today, an exhibit explains prison life. I think the photo above shows prison authorities. There were some photos of prisoners, but I could hardly bear to look at them. During World War II, resistance fighters were imprisoned at Fontevraud. Ten of them were shot on the grounds. 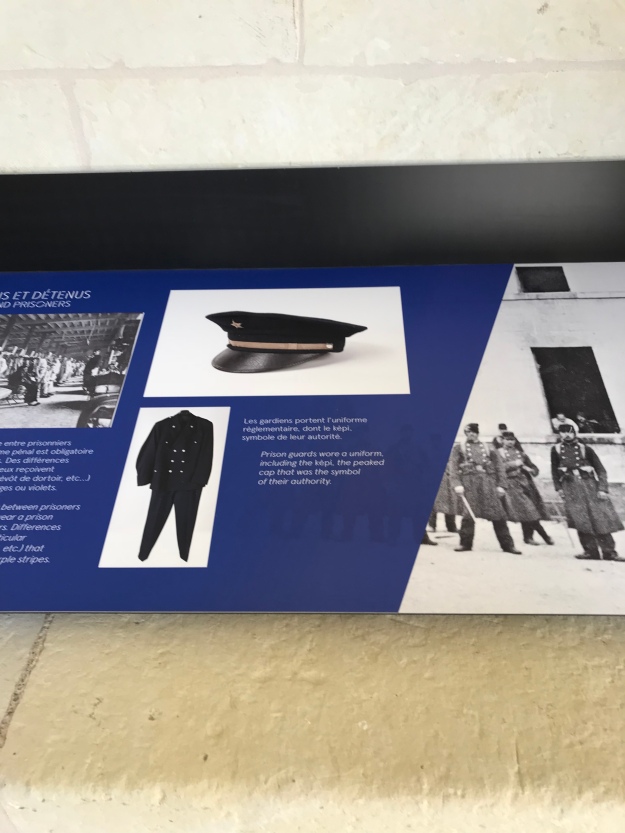 Prisoners did forced labor in complete silence, never allowed to speak even to each other. They were subject to terrible abuse. They worked day and night with very little food or rest. Life expectancy was 8 months.

I felt chilled and fearful the entire time I was in the Abbey. I felt certain that the place was haunted by the thousands of prisoners who suffered and died there. The prison finally closed in 1963. 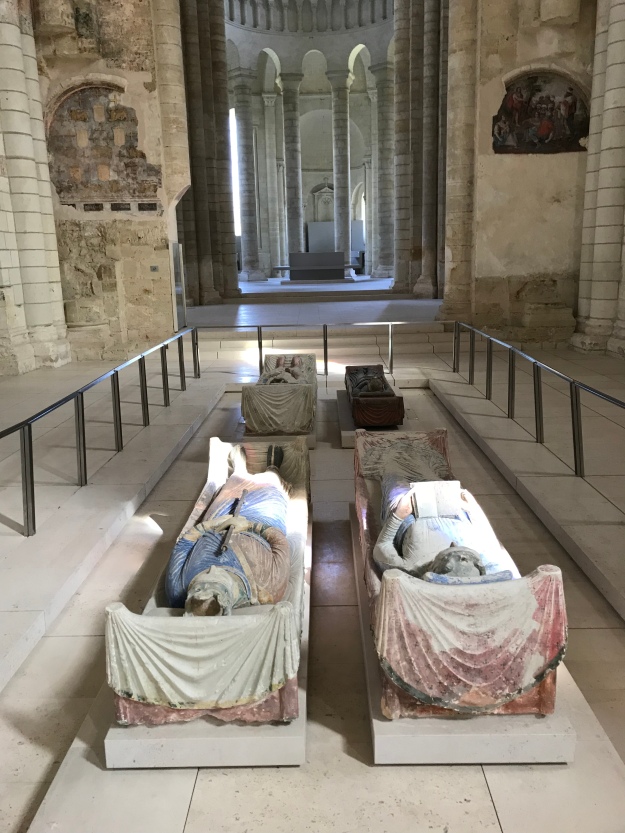 Today, there is very little visible information about the royal tombs. Actually, what is visible is probably just the effigies. The tombs are very likely elsewhere. 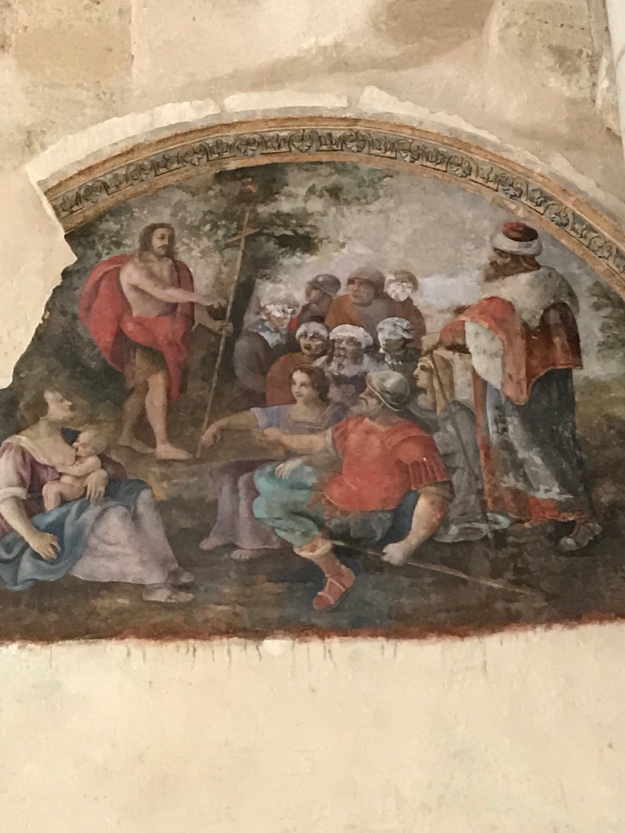 The huge nave is cold, empty, and unconsecrated. Only a few fragments of wall paintings remain. There’s nothing much to look at except a kind of desk off to one side, where one person can sit and look at computer images. A small group was huddled over it and I could not even get close. And the building was really cold, even on a sunny day in May. It felt like more than just a physical coldness. 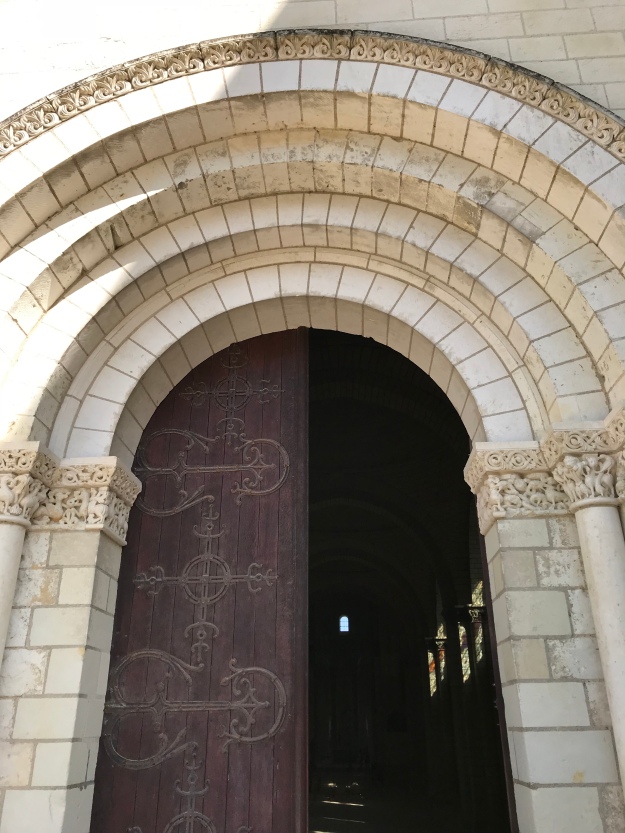 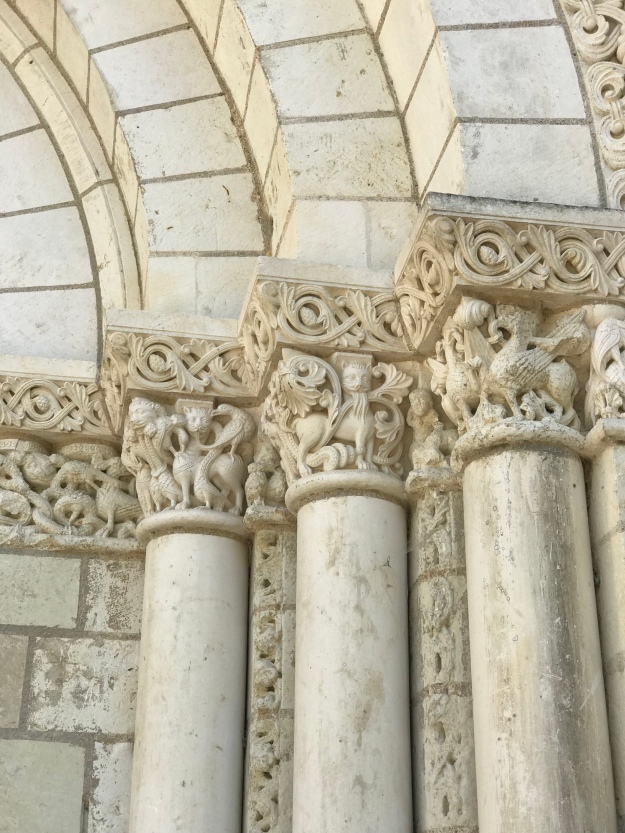 I’d have to be a much bigger fan of Romanesque architecture to venture through the Abbey doors again. But I won’t make it that far anytime soon. Entry to the Abbey is through a modern annex that somehow feels prison-like, with automatic sliding air-lock-type glass doors. I didn’t see any free guide brochures, and for once I didn’t feel like springing for a guidebook. Entry fees are stiff, too, and nobody is especially welcoming. Signs directing visitors are few and far between, and confusing. 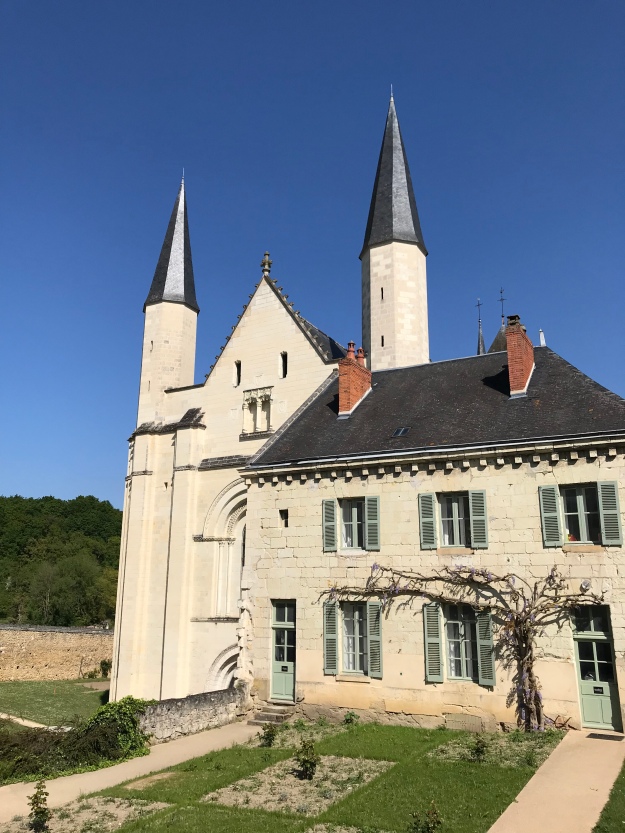 I know there are other buildings in the complex that I missed. But most of the buildings seem to be closed. 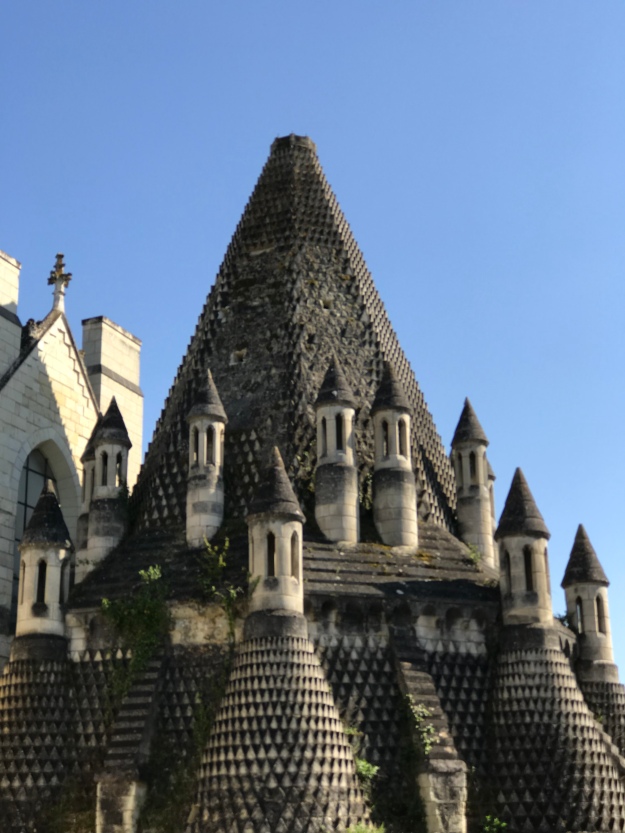 Parts of the complex still seem to be under renovation or off-limits for other reasons. Back in the entry/exit/bookshop, I paged through a guidebook. I couldn’t find anything that tempted me to go back inside.

Maybe I lack imagination when I look at empty ancient spaces. Maybe I just wasn’t persistent enough. But I couldn’t wait to escape Fontevraud. I blame the ghosts. 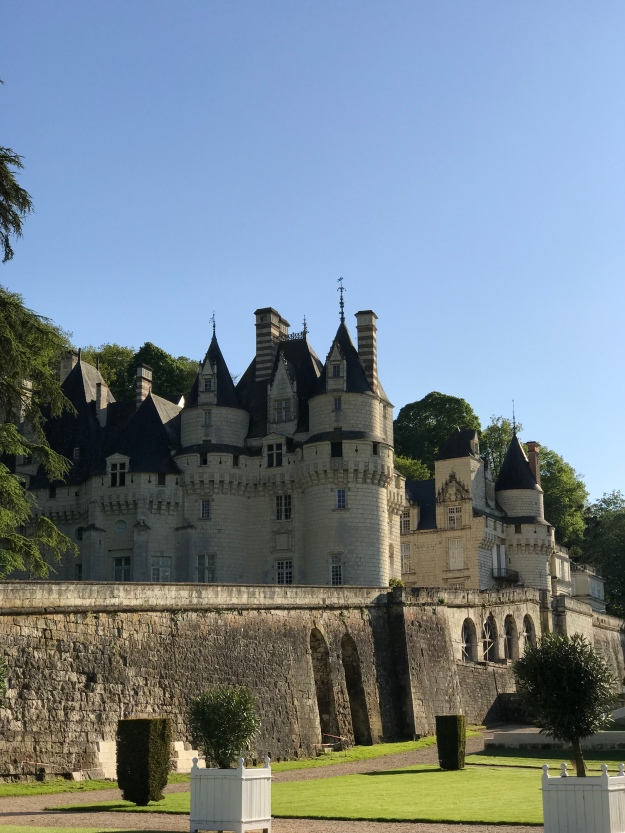 I left and rushed to the nearest chateau, Usse, where I got in just before it closed for the day. If there are ghosts at Chateau d’Usse, they are friendly, welcoming ones. I know that a lot of people love Fontevraud. But it left me cold. And I don’t think a warm coat would have helped much.