Claude Monet was not always the rich and famous inventor of “Impressionism.” In fact, “Impressionism” was not always a revered art movement, or a way to sell countless silk scarves and coffee mugs. In 1872, the 32-year-old artist exhibited a painting titled “Impression, soleil levant” (Impression, rising sun”) which was ridiculed for being a mere Impression, not a real painting. But he persevered. 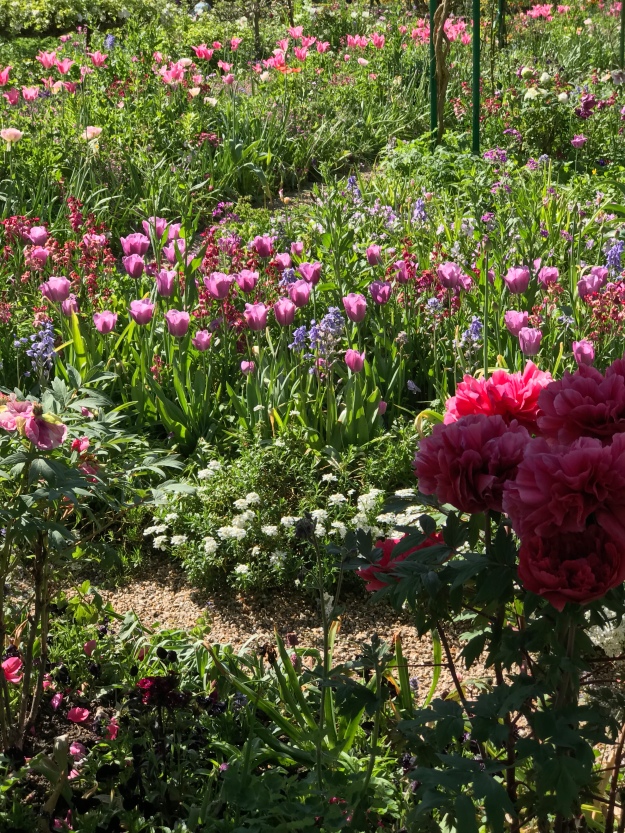 In 1876 Monet’s young wife Camille became ill with tuberculosis, common in those days. She was weakened further after giving birth to two children. She died at age 32 in 1879, apparently from uterine cancer on top of everything else. She never saw the gardens at Giverny; they did not exist in her lifetime.

In 1876, Monet and Camille had been invited to the chateau of businessman/collector Ernest Hoschedé, where they met Edouard Manet and other artists. His wife, Alice, became a good friend to the young couple. Then disaster struck. Hoschedé went bankrupt, abandoned his family, and fled to Belgium in 1877. Alice began caring for Monet’s two children, along with her own six children. She and Claude decided to join forces and bring up their children together. Neither of them had much money, and there were years of hardship.

They were finally able to marry in 1892, once Alice’s estranged husband died. 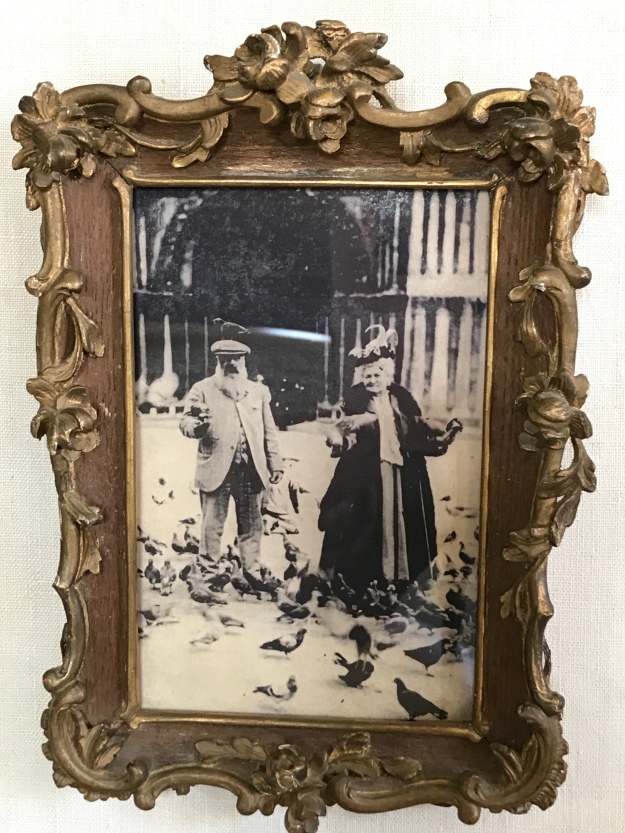 After all their troubles, it seems they happily raised their large family and grew old together. In their house, I loved this photo of the two of them feeding pigeons in St. Mark’s Square in Venice.

But during their years of poverty and somewhat scandalous living arrangements, the couple lived in rented houses which Monet hated. In 1883, he caught a glimpse of Giverny from a train window. He rented the existing house and began cultivating a garden.

His painting career was taking off during these years. Soon he was able to buy the house. He and Alice entertained all the important artists and writers of their time. Today, reproductions of the paintings of Monet and his friends are informally displayed on shelves, as the originals were in his lifetime.

Monet added various rooms to the house. His own sunny corner bedroom featured some of his favorite paintings, now replaced by reproductions.

He especially liked Renoir’s serenely sunbathing lady. So do I. 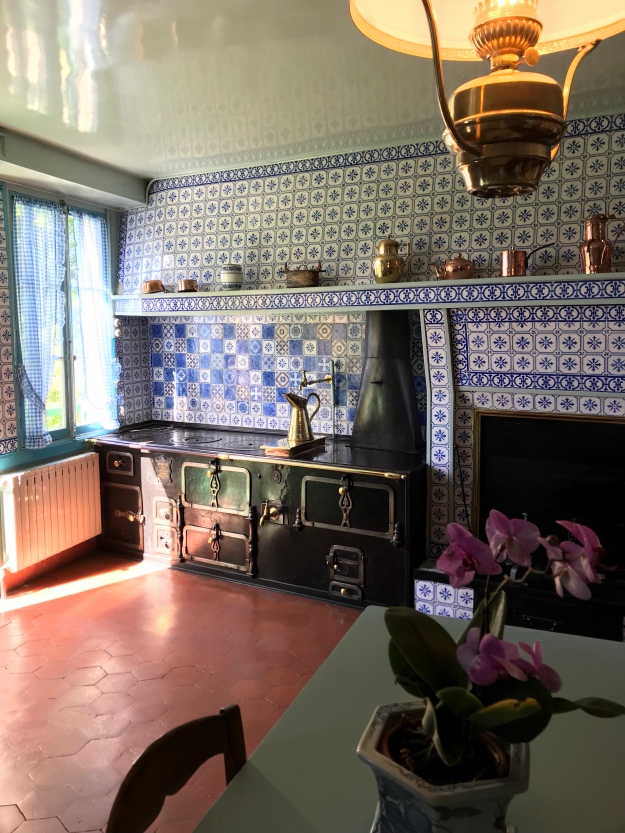 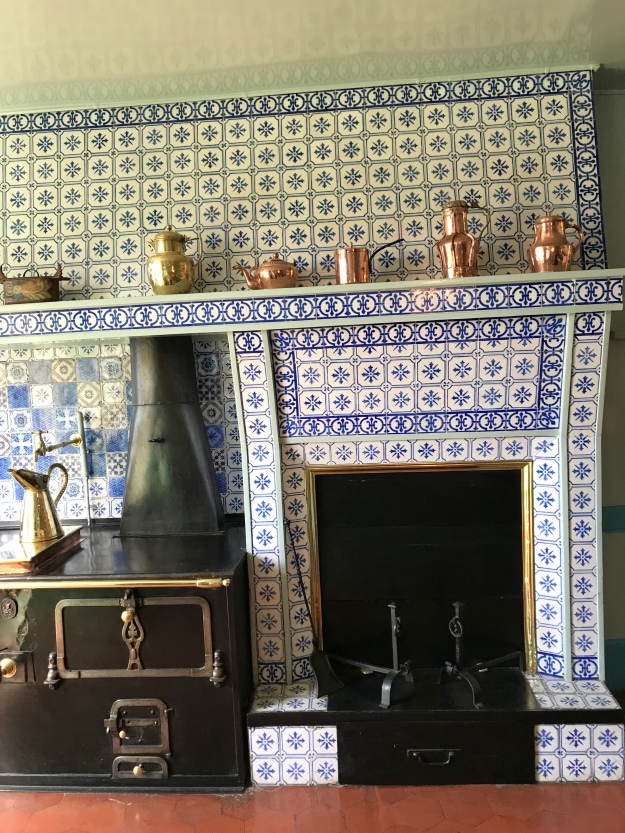 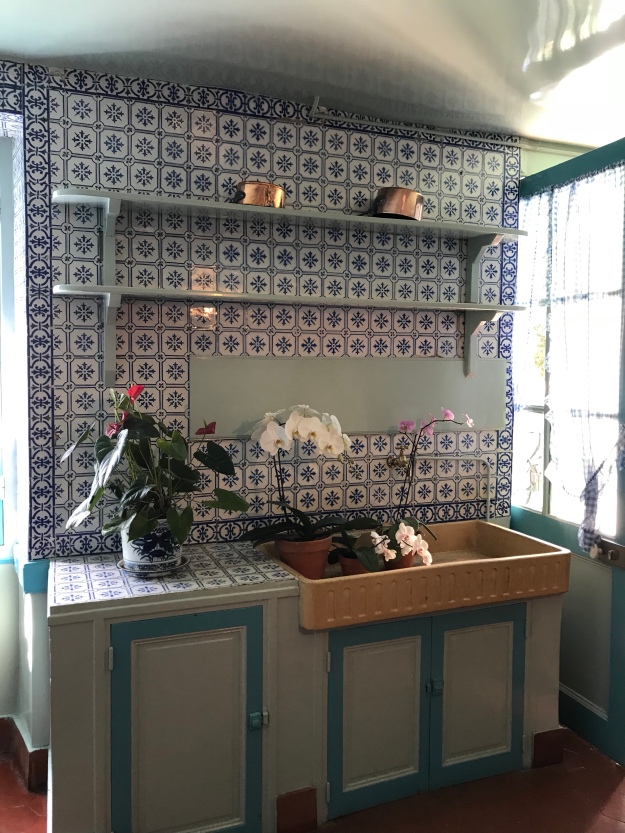 I imagine there must have been a kitchen garden in Monet’s time. The blue-and-white-tiled kitchen was large and equipped to serve a big family and plenty of guests. 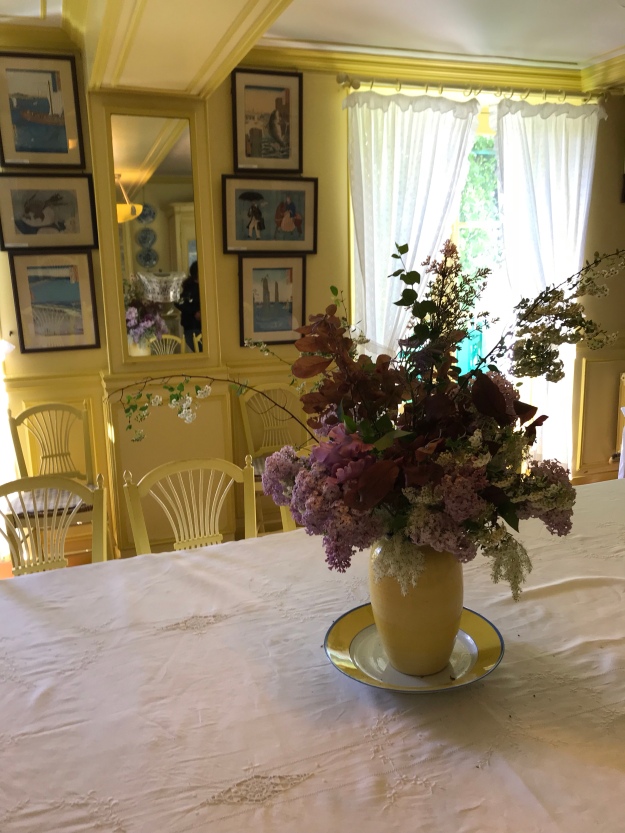 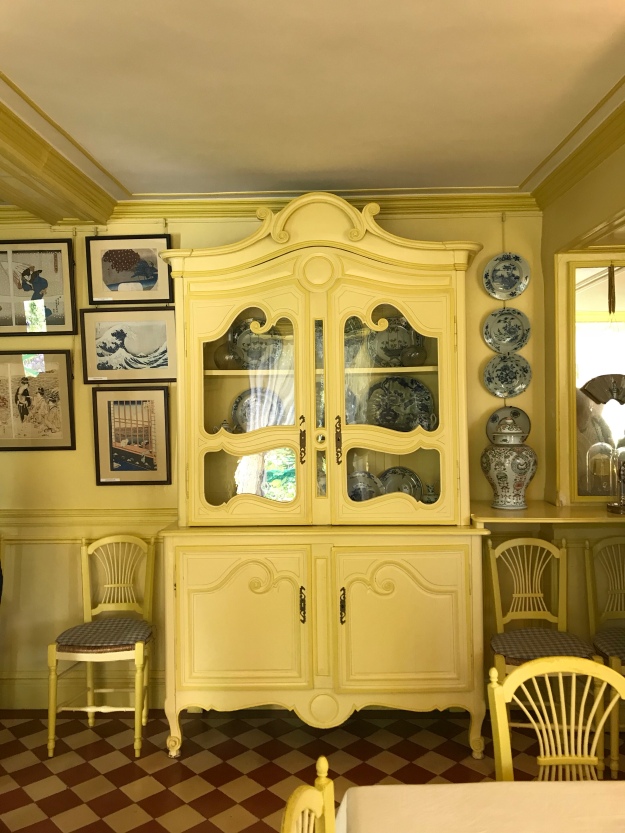 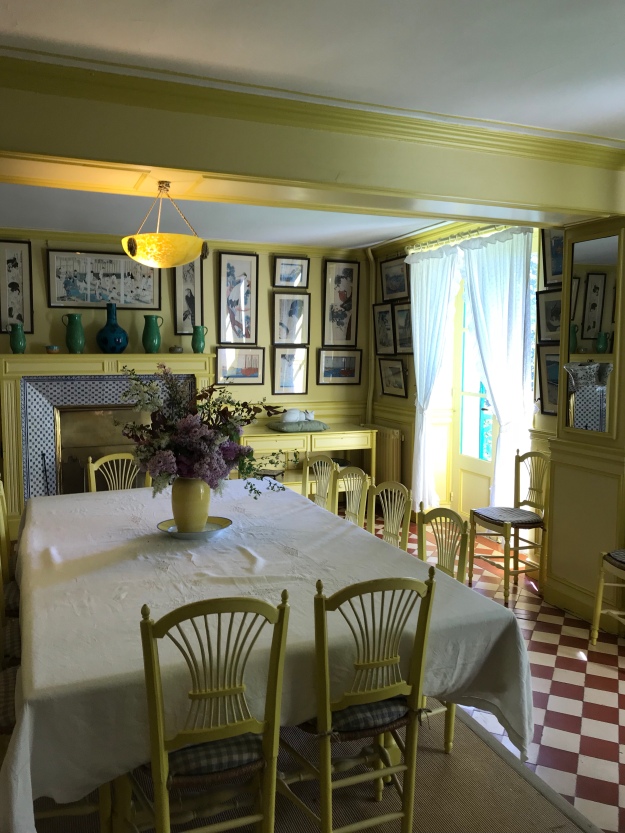 If I could choose one time and place to time-travel to dinner, it might be to the cheerful yellow dining room at Giverny.

As in Monet’s time, the house is full of the Japanese prints that he and so many other artists had begun to collect. Japanese art, which had only recently become widely available outside Japan, strongly influenced all the artists of the time. 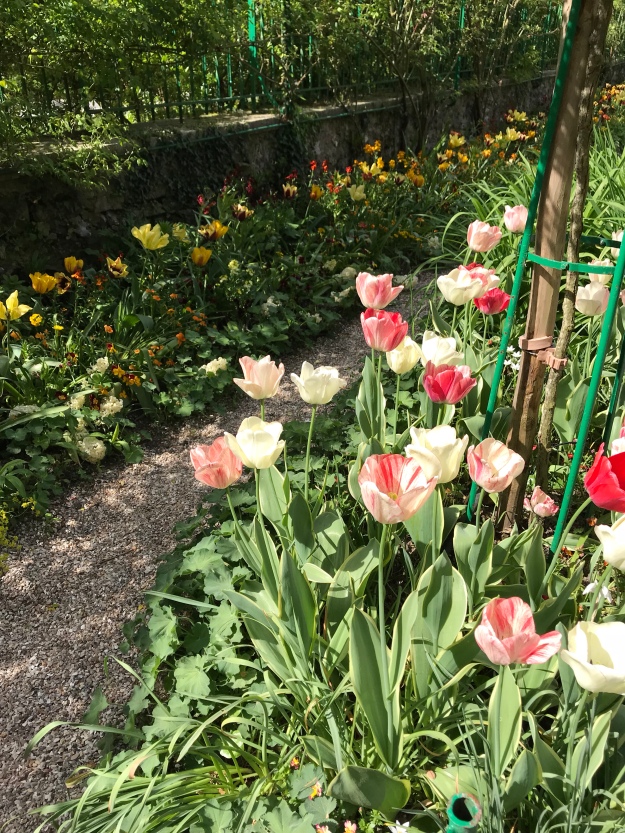 As his garden grew and thrived, Monet always had something beautiful to paint close at hand.

Above is a detail from “The Garden at Giverny,” 1900, now in the Orsay Museum in Paris. 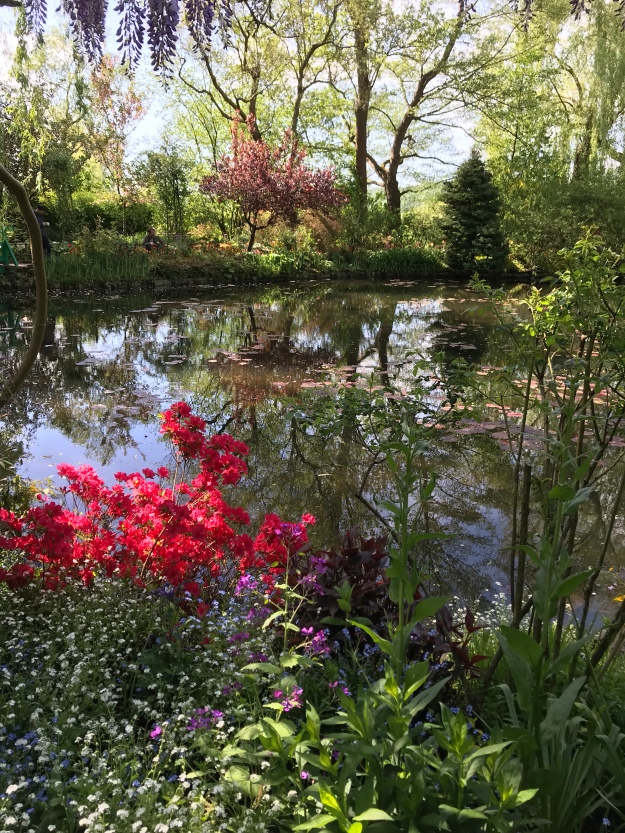 Eventually Monet was able to buy adjoining property with a stream. He created his famous lily pond with its Japanese bridge. 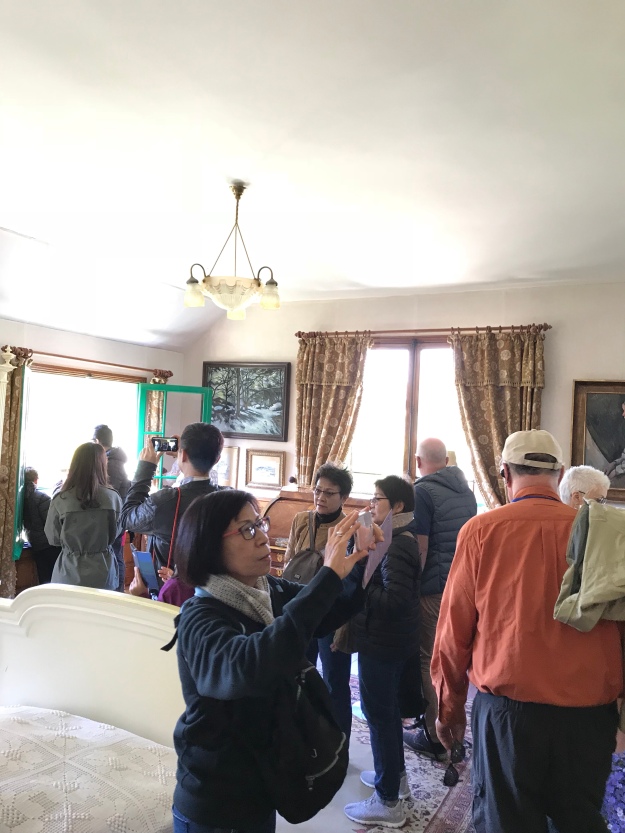 Is Monet’s home crowded and touristy? Oh, yes. I’ve seen it several times over the years, and the crowds get worse every year. The gardens are large enough to absorb quite a few people, but the house must get unbearably packed. I think the house should have timed entries.

On a weekday morning in late April, I arrived early and there were plenty of people. By the time I left at noon, the line to get in stretched at least a full city block. If I encountered a line like this, I would leave for awhile and come back in late afternoon. The light would be better anyway, and the tour buses would have left.