I was just planning on a quick walk-through of the building, which honestly is not to my taste. But the courtyard has sixteen large wood reliefs, each about eight feet tall, by Dagfinn Werenskiold. They portray Norse myths from the 13th century. He had me at the Swan Maidens. Legend has it that three Valkyries appeared on a beach one day in the form of swans. They turned into beautiful women, married three brothers who happened along and couldn’t believe their good fortune, and stayed fourteen years. Then they flew away. I don’t know the end of the story, but the Valkyries are beings that fly over battlefields, deciding who will live and who will die. Did the brothers later fight in battle and get saved? Or had they maybe left the toilet seat up one time too many? The answers are lost in the mists of time.

The Oslo City Hall replaced a slum in the middle of the city, directly on the Oslo Fjord. The exterior style is listed as “Functionalism,” which sums it up. The architects were Arnstein Arbeberg and Magnus Poulsson. It was partially built by 1939, but then World War II intervened and it was finally completed in 1950. The spectacular interior more than makes up for the so-so exterior. 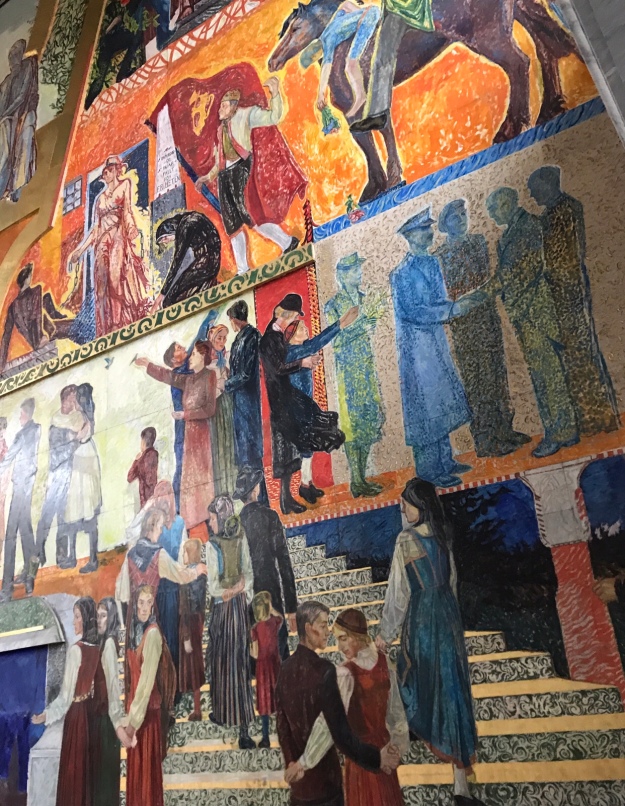 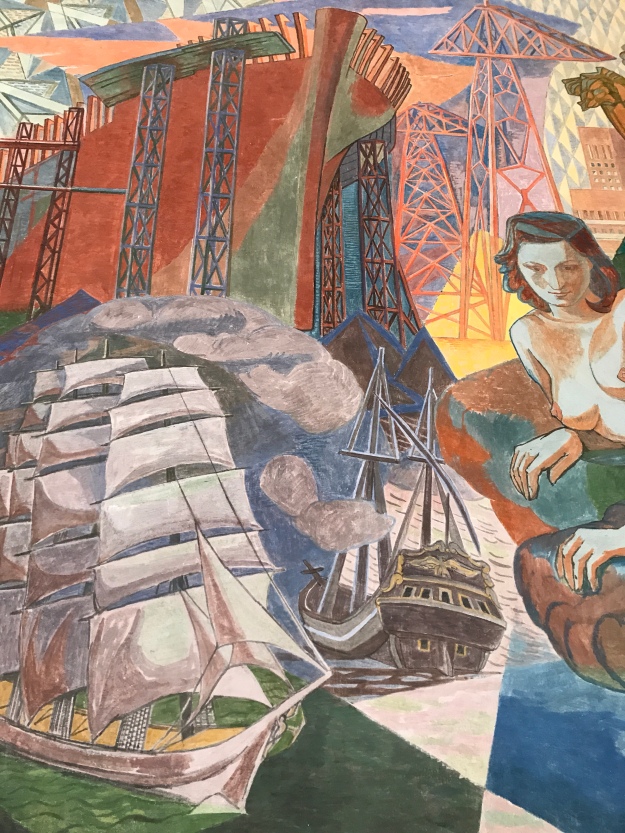 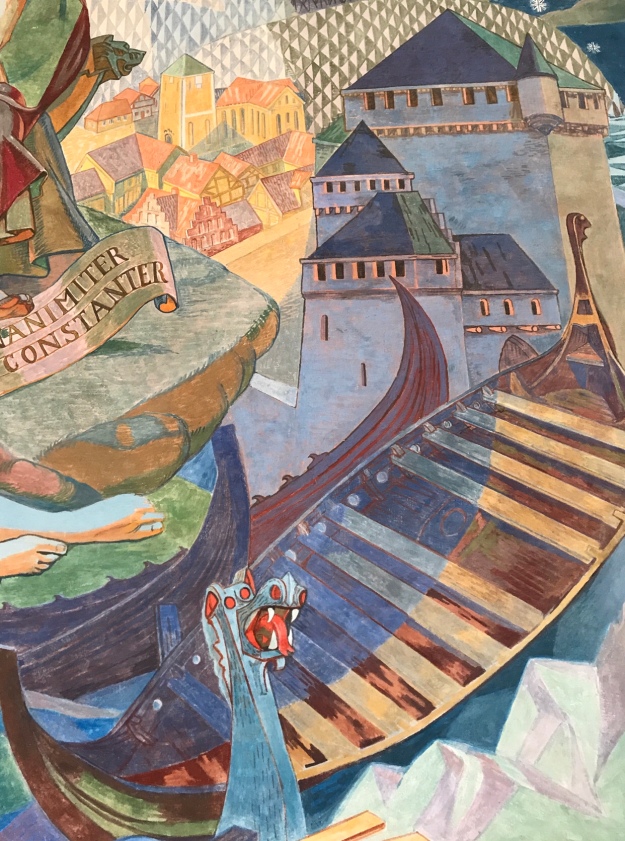 Inside, the grand rooms were decorated by the finest Norwegian artists, chosen by competition. The details above are from Henrik Sorenson’s huge mural “The Nation at Work and Play.”

It dominates the Main Hall, where the Nobel Peace Prize is awarded every year. 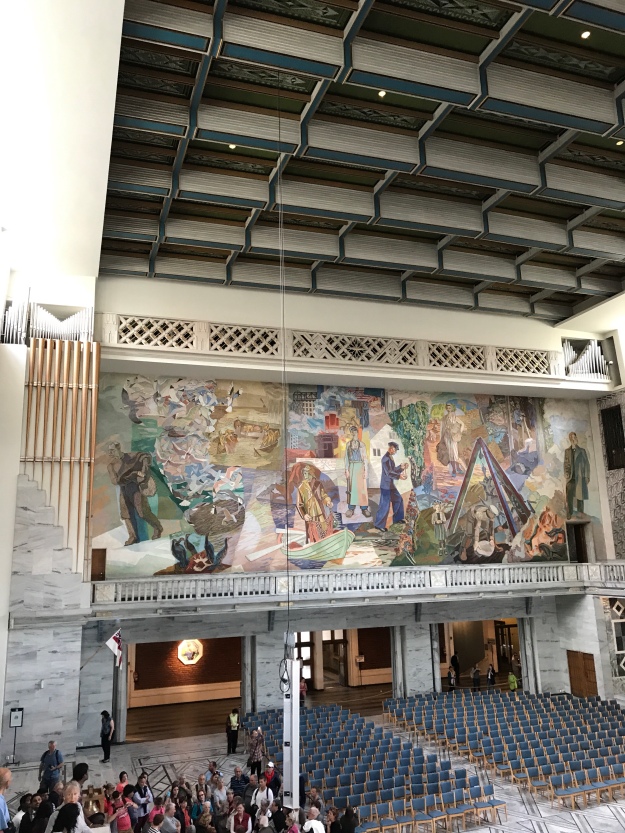 The rear wall features a mural by Alf Rolfson.

I like the “smaller” rooms even better. The Festival Gallery has windows looking out over the fjord, and a beamed and painted ceiling. Of course there are Viking motifs, like this creature inset in the marble floor.

Axel Revold covered the end wall with a mural depicting the long, narrow country of Norway from north to south. 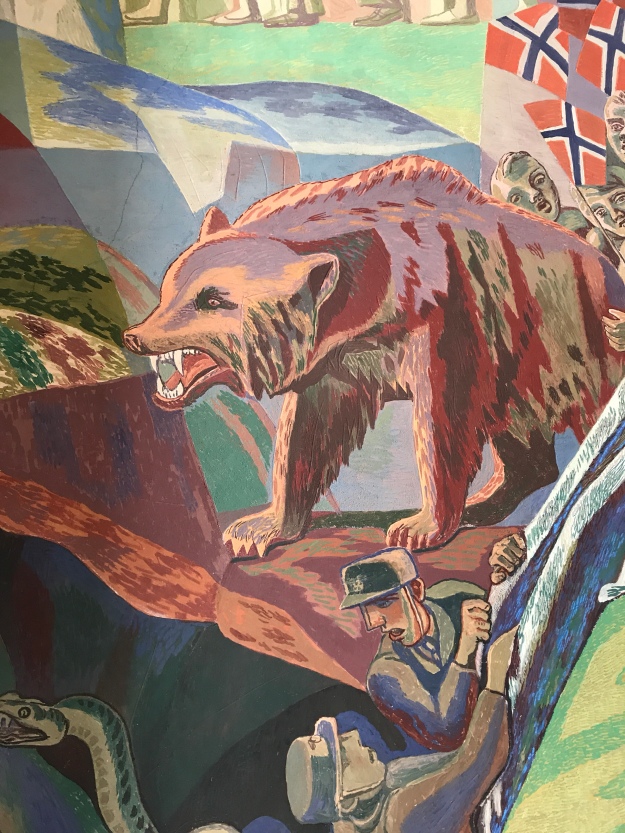 Aage Storstein, a young up-and-coming artist, painted the West Gallery with images of freedom and democracy. I don’t really understand the history or the politics, but a captive princess and a bear depict the centuries that Norway was in union with Denmark (not exactly willingly, it seems). 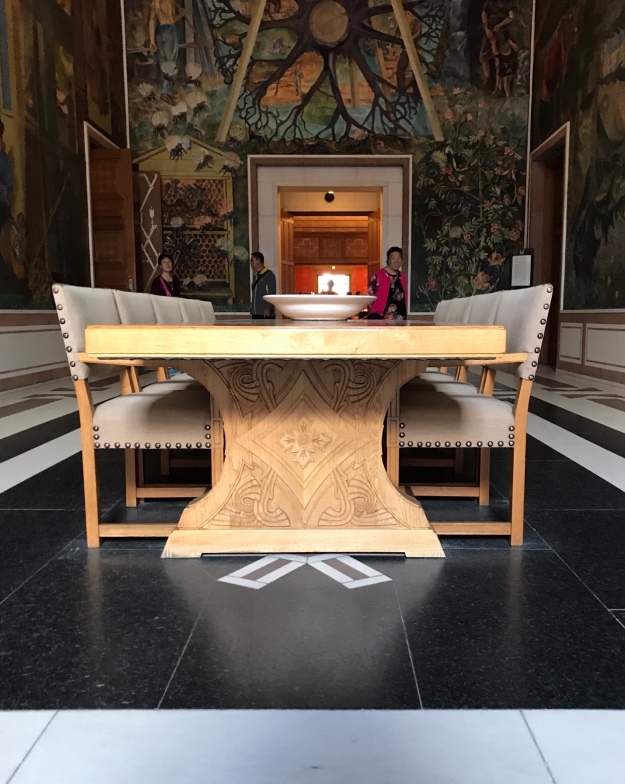 My favorite room is a smallish one, the East Gallery. Per Krogh considered it his masterpiece. 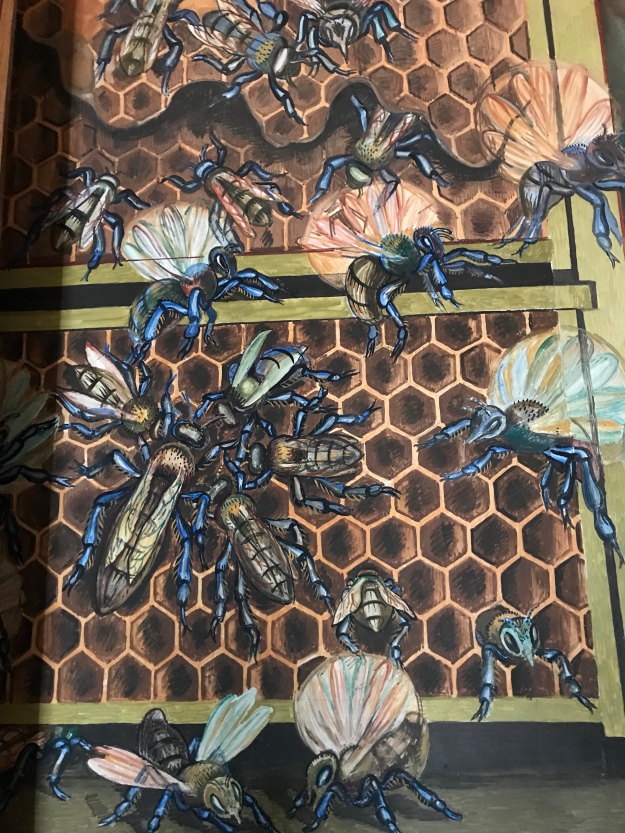 The beehive represents city life and the rosebush country life.

He painted an uprooted tree as a rose window.

So much for a quick walk-by of a boring city building. I wandered in the Oslo City Hall for a long time. Outside, I admired Dagfinn Werenskiold’s wooden carvings again. How about Odin on his eight-legged horse Sleipner?

Or ponder “Embla,” an elm tree turned into the first human woman in a Nordic creation story.

Her partner was Ask, a man created from an ash tree.

I was so inspired by Norse mythology that when I recently had an art-class assignment to do a painting that tells a story, I tried my own Swan Maidens. They’re creepily faceless right now while I work out how to do noses and eyes and chins and mouths. Meanwhile, I’ll enjoy my Nordic memories.