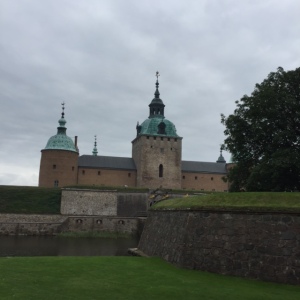 Kalmar is a pretty town on the Swedish Baltic coast. It has a spectacular Renaissance castle on a site that was of strategic importance for many centuries, starting about 800 years ago.

Naturally, it has spectacular doorways, beginning with the dry-moated entrance.

Some of the doors are clearly defensive.

Some are more decorative, but still formidable. 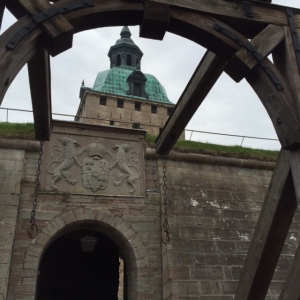 Some are meant to impress and possibly intimidate, like the one just past the drawbridge.

This door features the regal lions of Sweden.

Inside, doorways reflect the luxurious tastes of kings and queens.

The doorways of Kalmar Castle are all worth entering.  Everything is more spare than Renaissance castles and palaces in England, Austria, Germany, France or other European countries.  But that very spareness has its own Nordic elegance. The castle is a fascinating look at the unique ways that Renaissance ideas played out in Scandinavia.

The shop has books about Elizabeth I and Mary Queen of Scots, apparently because most of the major rebuilding and decoration of the castle was done during their lifetimes. And at least one Swedish prince was known to have courted Elizabeth I. Of course, we all know that she said “No!” to marriage. But at the time, Sweden was a great naval power.  I wonder if Elizabeth gave some serious thought to a Swedish alliance. How might history have been different if she had said “Yes!” to a Swedish prince?

Castle doorways always lead me to questions like this.  It’s why I travel.