Kedleston Hall is the spectacular showplace home of the Curzon family, designed by Robert Adam, finished in 1765 and open to visitors before all the plaster was dry. The housekeeper led visitors (of the right sort, of course) on a tour through the state rooms. The point was to impress visitors with the wealth, power and taste of the family. Not everyone cared for the place, though. Dr. Johnson remarked, “It would do excellently for a town hall.” I have to agree.  Entering the lofty Marble Hall feels like entering a courthouse. Visitors stop in their tracks and speak in hushed voices.

My favorite part of the estate is All Saints Church on the grounds outside. The church is an important historic site, cared for by a special organization separate from the National Trust, which manages the house. 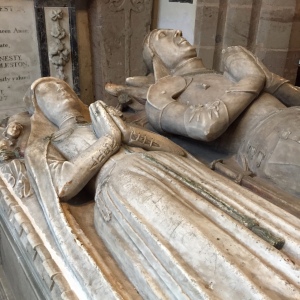 Curzon ancestors, dating all the way back to Norman times, were buried inside and in the churchyard. When Sir Nathaniel Curzon inherited the estate in 1758, he lost no time in razing the medieval village where his ancestors had lived quietly for centuries. But he kept the village church where they slept in their tombs.

As the plaque above explains, various Curzons maintained and restored the church over the years.  But its pristine condition today is mostly because of a sad love story.

The photo above shows the exquisite marble memorial of Lord George and Lady Mary Curzon.  It was created between 1907 and 1913 by Bertram Mackennal. (Visitors can’t get the complete view above, because the side chapel is separated from the main church by a gate). This is one of the most beautiful and intriguing of all the many tombs I’ve seen in old churches. Who were these people? 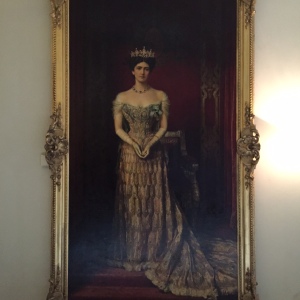 Mary Leiter was a fabulously wealthy, cultivated and beautiful young woman from Chicago.  Her father was Levi Leiter, founder of Field and Leiter stores, which eventually became Marshall Fields. (Yes, Mary Leiter was an inspiration for Cora, the perfect wife of Lord Grantham on the TV show “Downton Abbey.”)  Mary Leiter married George Curzon in 1895. He very soon afterward became Viceroy of India, the highest title available to an Englishman, during the heyday of Victorian empire. Mary gave birth to three daughters, but failed to produce the all-important son. The years she spent in India were happy ones, but her health suffered and she died in 1906, aged only 36.

Her husband immediately set to work memorializing her, even as he moved on to various mistresses and an eventual second wife. He never really recovered from his grief at losing Mary. So he built a neo-Gothic addition to the family church. The addition blends almost seamlessly with the original medieval church.   He commissioned the beautiful marble memorial. Mary was buried in the newly-created family vault underneath.  My understanding is that Lord Curzon had Mary’s effigy placed on the plinth as soon as the chapel was complete.  His own effigy was finished and kept in storage until he died.  Then it was placed next to his beloved Mary, and he took his place in the vault below.

Victorian technology allowed Lotrd Curzon to install a hidden elevator in the marble floor next to the memorial, so that coffins could be lowered into the vault at the push of a button.  The friendly church guide recalled the spooking of a lady in recent years. She walked into the church just as a workman rose slowly from underground, standing on the moving section of floor. The terrified lady fled.

The guide pointed out that Lord Curzon’s right foot is uncovered, a Victorian convention indicating that the effigy was created while the person was still alive. Lord Curzon was a stickler for detail, and he expected the same from his family and everyone who worked for him.

The sculpture depicts two angels hovering over the sleeping figures.  What are they holding? It’s the Crown of Life–a fairly obscure Biblical reference. The crown is wrapped in a veil. Why?  My thought is that nobody gets to see their heavenly reward until they actually receive it in the Great Beyond.

The sculpture stands serenely in its own side chapel, surrounded by nine stained glass windows depicting various Marys from the Bible and other sources. Impertinent questions come to mind. Considering that there are two people lying in state, why is there only one crown? Is the sleeping couple somehow supposed to share the crown, or is it meant for only one of them? If it is for one of them, would that be Mary? In some traditions, Mary the mother of Jesus became Queen of Heaven after her death. But this is an Anglican church, and as far as I know has no such tradition. Anyway, wouldn’t it be just a bit sacriligious to insinuate that one’s wife was destined to be Queen of Heaven? The guide had an information booklet, but there was very little explanation of the mysterious veiled crown. I would not use a vulgar term like “control freak” for Lord Curzon, but I half expected his ghost to tap me on the shoulder and set me straight about the crown. He did not suffer fools gladly.

Lord Curzon never found another person who could compare to his Mary, and by all accounts he often said so. How could any actual living person compete with a sainted ghost? After Mary’s death, Lord Curzon was soon battling his daughters for their shares of the money Mary had left. He ended up estranged from them. Toward the end of his life, he was also estranged from his second wife, Grace. All the same, according to the guide, Lord Curzon kindly reserved a space for her in the family vault. But Grace did not care to spend eternity directly underneath the effigies of her husband and his first wife, depicted in everlasting marital bliss. Instead she chose a burial plot for herself in the far corner of the churchyard.

Every trip leads me to buy books which I may or may not find time to actually read. I’ve already devoured the book above, The Viceroy’s Daughters by Anne de Courcy. The Curzon family history, especially in the 20th century, is riveting.  The book is a window into British aristocratic life from Victorian times all the way through World War II.  I’ll be writing more about the glamorous Curzons.

4 thoughts on “All Saints’ Church at Kedleston Hall”