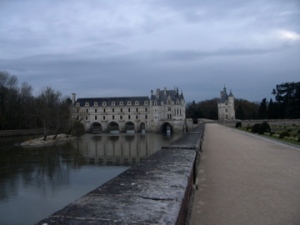 The town of Chenonceaux has, somewhat confusingly, a spectacular chateau called Chenonceau–without the X. Many people consider Chenonceau the most beautiful chateau in the Loire Valley.  It’s certainly the most unique:  it is actually built on a bridge that crosses the river.  It’s understandably popular. The thing to do is to stay in the little village of Chenonceaux so as to arrive early. The town makes a perfect base for driving around the Loire Valley.

I generally avoid hotels recommended in Rick Steves guidebooks. They’re nice, but occupied by large numbers of Americans.  I would rather be rubbing elbows with Europeans when I travel to Europe, even if I can’t understand much of what they’re saying.  But Rick-recommended Hotel la Roseraie is a winner.  It’s a small hotel, with only 17 rooms.  It’s not the fanciest hotel in town, but it’s surely the friendliest.

Rooms are warmly decorated. Ours had walls that had been laboriously covered with the very same sprigged fabric that made up the curtains. Dated? I prefer the term “faded elegance.”

The bathroom was totally up-to-date, though; it would pass muster any day on HGTV.

The owners, Sabine and Jerome, welcome returning guests as family.  Guests do return again and again to enjoy the leafy terrace and flower gardens.

There’s a charming little restaurant which needs to be booked because it’s popular even with people not staying in the hotel.  I don’t like the feeling of being obligated to eat in a hotel’s restaurant, but this was a delightful experience.  It was traditional but not too formal, the food was fresh and delicious, and no one looked askance at my admittedly fussy vegetarian requirements.

Just outside town, there are Roman ruins.  Julius Caesar is known to have actually slept there–or so the locals say. When I was there, the ruins were partially covered with plastic.  Maybe next time, there’ll be a little visitor center.

The village, like all French villages, has a top-class bakery.  One of those strawberry tarts is waiting for me!