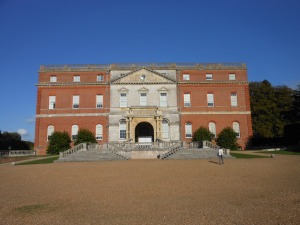 Well, I hope it’s not really forever.  Clandon Park is a splendid 18th century Palladian mansion just outside London. It was featured as a location for the film The Duchess, starring Keira Knightley.  It went up in flames a couple of days ago. 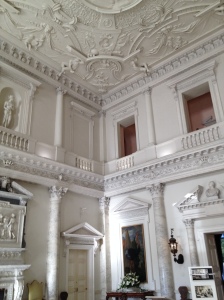 The Marble Hall, one of the finest in England–and in the world–is gone. It was a perfect cube, 40 feet square, of white marble, a space designed to impress.  The ornate stucco ceiling completed the cube, with heroic figures superimposed on the exquisite background. Outside of visiting hours, the mansion was a popular wedding venue.  Several English brides are scrambling right now to replace their dream setting for a white wedding. 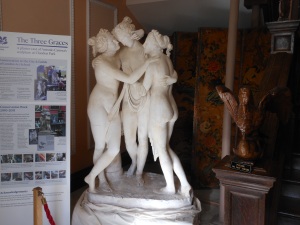 Countless volunteers and at least 80 firefighters struggled to save what they could.  Much of the furniture and art was rescued, but I doubt that anyone was able to move this life-size sculpture of “The Three Graces” by the great Italian sculptor Antonio Canova. 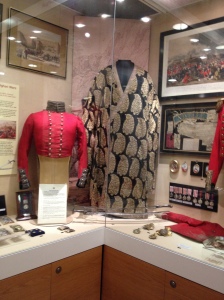 The mansion housed a wonderful military museum in the basement, where the fire apparently started. I know that the prized Victoria Crosses, awarded for bravery in battle, were saved.  Certainly the many colorful uniforms from heroes of the past were lost too. The Onslow family, who began building on the property in the 1200s, were prominent British politicians. In fact, three of them served as Speakers of the House of Commons. More recent Onslows fostered connections with Maori tribes.

I was fortunate enough to see the house in its glory, last September.  Will it be rebuilt?  Possibly.  Some National Trust properties, such as Uppark, were eventually rebuilt.  But this was an especially devastating fire which left a national treasure an empty roofless shell.  I am sad.

An article about the fire is at  http://www.theguardian.com/uk-news/2015/apr/30/clandon-park-house-fire-salvage-stately-home-surrey#img-3. The photo above, by Rex Shutterstock, is from the article.