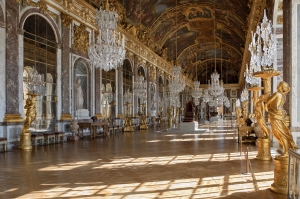 Why bother to stay overnight in the town of Versailles?   Most people do Versailles as a daytrip from nearby Paris. The picture above shows the best reason to spring for an overnight. It’s the Hall of Mirrors, built by Louis XIV in 1678 and crammed with people ever since. On one memorable day, after an overnight in Versailles, I managed to appear early at the entry with ticket already in hand. Success! I had arrived early enough to be THE VERY FIRST PERSON to walk the length of the glittering room. I was so awed that I didn’t take a picture.  The one above was taken by a person with more presence of mind. 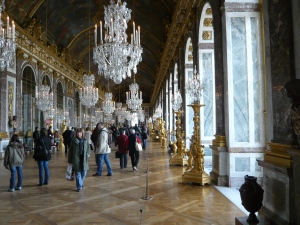 This picture above was taken about 20 minutes later.  On busy summer days–which I would avoid– tourists shuffle along almost shoulder to shoulder. But once in my life, I had the place all to myself. I doubt that even the Sun King himself had that privilege, unless he managed to do it late at night after courtiers had turned in. 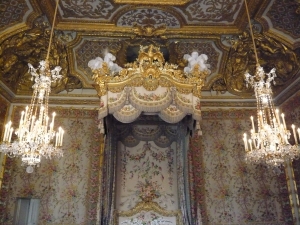 The King invented two ceremonies which bookended his day:  the Lever, when invited courtiers watched him get up, and the Coucher, when he was tucked in for the night under his grand canopy festooned with ostrich feathers. Like everything else Louis XIV did, these ceremonies inflated his ego and made people think they were lucky to even be in his presence. Trouble was, he made his bed and then he had to lie in it.  In actual practice, the King sometimes did get up way early to go hunting, but Louis XIV valued ceremony so much that he would return to bed in order to properly get up all over again.

It’s hard to appreciate the overwhelming scale of the Palace of Versailles–and the Sun King wanted everyone to be overwhelmed.

I do better getting off to the side and lingering over some details, like this corner of the Hall of Mirrors.

Images of the Sun King are everywhere.  He could have invented the modern term “self-esteem.”  He famously remarked, “L’Etat, c’est moi,” meaning “The State, it is me.”  That worked out pretty well for him, but not so much for his offspring.

Louis XIV also once remarked, “Apres moi, le Deluge.” That loosely translates as, “After me, all hell breaks loose.”  He had that right.  His descendants managed to hold on to their riches and absolute monarchy for only two generations before the Revolution changed everything.