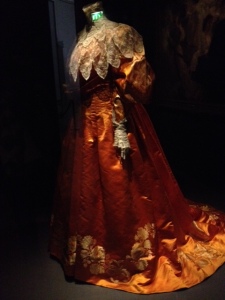 This dress, featured in the Paris 1900 exhibit last spring, was made in the atelier of the man generally reputed to be the first “couturier,” or artist whose chosen art form was women’s fashion. Charles Frederick Worth laid the groundwork for Dior, St. Laurent and others in that rarefied sphere.

Charles Frederick Worth founded the venerable House of Worth, which clothed rich and beautiful women beginning in 1858 in Paris.  He was actually an Englishman, and he got his start in drapery shops.  In his spare time, he made dresses for his wife.  Soon his designs were in demand, and he was on his way. The Empress Eugenie (wife of Napoleon III) found her way to his shop, and other rich and titled women followed.

Previously, a woman who wanted a dress went to a dressmaker and specified how the dress was to be made. Worth came up with a brilliant idea:  he held fashion shows four times a year featuring various styles.  Women could choose a style, then choose the fabric and have it tailored to their own figures.

This particular dress had a sort of matronly look, I thought. It was made in about 1895, five years before the Exposition of 1900.  I much preferred the more ethereal dresses in sheer white fabrics. But the rich and titled no doubt still needed imposing clothes in expensive fabrics. For such women, Worth was their man.