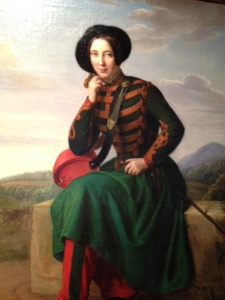 Among the hundreds and hundreds of stiff military portraits and battle scenes in Les Invalides, the military museum in Paris, this sturdy but friendly woman stands out.  She was Madame Bru, one of the few respectable women allowed and even encouraged to follow the French army. She was known as the “cantiniere” of the 7th Regiment of Hussars.  She and no doubt some other women like her organized mobile canteens which provided the soldiers with food, drink and tobacco.  Many times, they also served as nurses. They were sometimes awarded military medals for their services. Madame Bru, painted in 1837, was no doubt a beloved figure in “her” regiment.