Actually, I should make that “trois escargots et un chou.” That was the tongue-in-cheek coat of arms chosen by the great French landscape architect, Andre le Notre, when a grateful King Louis XIV ennobled him.

Le Notre was born into a family of gardeners; his family lived in a house in the Tuileries, in the very shadow of the Louvre when it was still a royal palace.  He was a humble man; he always called himself “just a gardener.”  He never wrote any treatises on his work; he let his gardens speak for themselves. He developed the French formal garden into a sublime art form and an expression of the most current scientific thought as well. 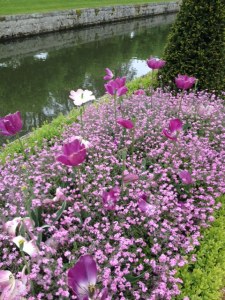 Le Notre worked on the formal gardens at Chantilly, Vaux-le-Vicompte, Fontainebleau, and many other chateaux.  His work culminated in the spectacular grounds at Versailles.  A more modest example of his work is at the Chateau de Maintenon, home of the King’s final and “secret” wife.

While wandering in this beautiful manicured garden, I could hardly bear to think of my raggedy yard at home.  Then I came upon a photo of the staff employed to maintain even this small and modest French formal garden, and I felt better!