Sometimes a tourist gets an unexpected window into contemporary local culture.  That is what happened a few years ago, when I visited Honfleur. It’s a charming and well-preserved harbor town on the Normandy coast. As far as I could tell, the town escaped bombing in World War II. 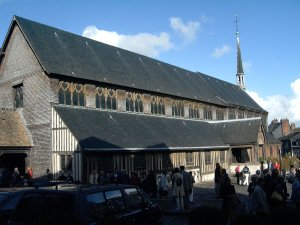 One of the major things to see in Honfleur is St. Catherine’s Church, actually a cathedral dating from the 15th Century.  It is the oldest surviving wooden church in France. 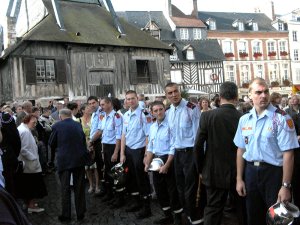 When we arrived, a wedding was taking place.  Uniformed members of the local fire and rescue brigade milled about, both inside the church and outside.  Tourists were allowed to enter and stand quietly in the back of the sanctuary.  We watched the ceremony for awhile.  It appeared that both the bride and groom were members of the brigade.  Most of their guests were in uniform.  Their ceremony went on and on, with the groom, then the bride, then various other people making lengthy speeches once the ceremony itself seemed to be over. The bride looked as though she might give birth very soon, and from what I could understand of the speeches, the couple had gone through a lot of hardship and received a lot of help from their community. Finally, the bride and groom left, to applause and shouts of congratulation.  Outside, they were greeted by waiting colleagues, each holding up a helmet for them to pass under.

During the ceremony, I noticed caterers busy hauling in tall potted trees and beautiful floral arrangements.  The instant the fire-and-rescue bride and groom were outside, the caterers went to work transforming the sanctuary into a floral bower.

Outside, the fire-and-rescue bride and groom were driven away in a waiting fire engine.  The square was immediately filled with very posh-looking people, a completely different crowd from the one that had just left.  All the women wore huge elaborate hats.

Suddenly a discreet sedan pulled up to the front door of the church.  A spectacularly beautiful bride emerged, wearing a designer dress and veil–decorated with ostrich feathers! In the not-too-distant  past, ostrich feathers were only seen at a Royal Court gathering, and only royalty and nobility were allowed to wear them. Was the bride a Duchess or a Countess?  Was she marrying into a noble house?  Be that as it may, I have never seen a more elegant bride anywhere.

As the ceremony was about to get under way, I sidled over to the church door, hoping to sneak a look at this very fancy event (my invitation must have been lost in the mail). Alas, uniformed men stood guard, gazing sternly at anyone who approached the door.  Where we had been welcome at the working-class wedding, the fancy society wedding was another story. The two weddings gave us a very clear view of how the social classes mix–and don’t mix–in France. We wandered off into the town, content with having seen two sides of French life.